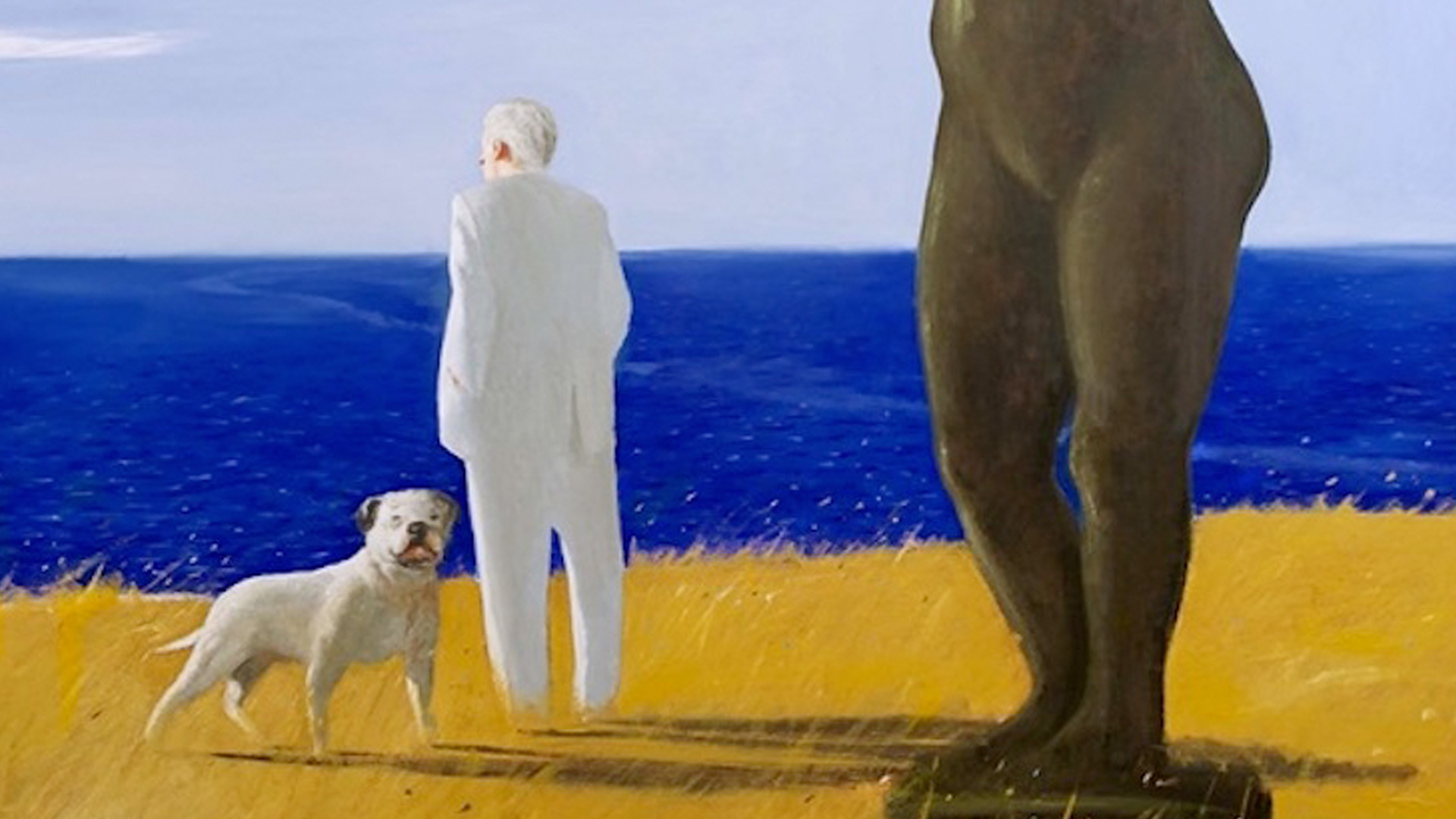 Julio Larraz (Havana, 1944) is known for a distinctive, almost metaphysical approach to painting and composition. On the occasion of Made in USA, his recent exhibition at Miami’s Ascaso Gallery, Janet Batet pondered the enigmatic, inviting character of Larraz’s vision and his art.

I was also in Anatolia. The light is hard: dazzling like blinding lightning that forces you to close your eyes, while behind the eyelids, the persistent image—impertinent, annoying, incomprehensible—is still there when you open your eyes, engraved forever in memory.  — Janet Batet

Venturing into Julio Larraz’s universe is always a risky proposition. His paintings, whether landscapes, portraits, or still lifes, are defined by a particular, unsettling aura that captivates and obsesses us.

The bewitching power of these images lies, above all, in their ambiguous character. Enigmatic, scenes that are somehow outside of time—whose elusive locations we can never quite identify—are repeated again and again in capricious variations, as in some sort of ominous ritournelle, the same tune.

Although his work connects with the realistic tradition of painting, Larraz’s vision is not necessarily part of reality. This is an artist who has repeatedly said that his paintings are the result of a “daydreaming state,” not concrete references. The atmospheres, characterized by that metaphysical nimbus arising from the use of a frenetic light, and the seemingly arbitrary framing of the compositions, which at times seem heir to the French New Wave,  have a dislocating effect on the viewer, who is forced to search for referents that are not there.

These are environments of rarefied beauty, where those being portrayed evade the viewer’s gaze—under the projected shadow of a hat brim, or with sunglasses, closed eyes, or simply by turning their backs. They seem at times like vertiginous approaches to broader vistas depicted in other works by the artist, and these in turn seem to be contained in other, still more colossal sights captured in curious succession.

This somewhat cinematic skein of images emphasizes the déjà vu feeling so dear to Larraz´s art, reaffirming that dichotomous feeling of intimacy and estrangement that inhabits his vision.

And it is Larraz’s vision itself that exists outside of time. Even when it is attuned to our present moment, his creative discourse has an archetypal character. It is not the here and now but the human condition that seems to obsess him. Despotism and altruism, frivoity and spirituality are among the opposites underpinning his work.

The titles appear as an inescapable compass. Real or fictitious places (Anatolia, Cumae, Agravox), lost in time, refer us to the Mediterranean in its role as the cradle of civilization, symbol of wisdom and creation—but also of quarrel, imposition, and intolerance. It is as if revisiting places already traveled will accurately predict our own next steps. References to the classical poets (Homer, Hesiod), emphasize the tragic background—in the classical sense, indissolubly associated with destiny—that overwhelms these works.

On a rocky point, at the edge of the Mare Nostrum, a sacred dome rises, untouched by time. Now the house of the poet, now an observatory, now a sacred temple, this persistent reference seems to be erected in the key of salvation. And yet more often, it appears deserted, ignored. In this sense, the works Cumae the end of winter, 2010; The Artist And His Model, 2011; Yasmin, View from the Terrace, 2012; and The First Day of the Year, 2014 are symptomatic. Over the top of the dome, the cradle and the legacy, carefree figures seem to deny it, looking far into the distance.

The timelessness is at times shaken by the introduction of means of transport (trains, ships, cars, airplanes) that, with their noise of industrial machinery, seem to be a beast´s roar wounding the landscape (Winter Ride, 2000; Coming Home, 2013; Sea Road to Bimini, 2013; Et Tu Brute, 2013; Traffic; The Return of the Prodigal Son, 2016). In others, the sense of timelessness is ruptured by concrete locations, recontextualized by titles that establish bridges and chilling lures into the present moment. Such is the case with Made in USA, 2014, the work that gives the exhibition its title.