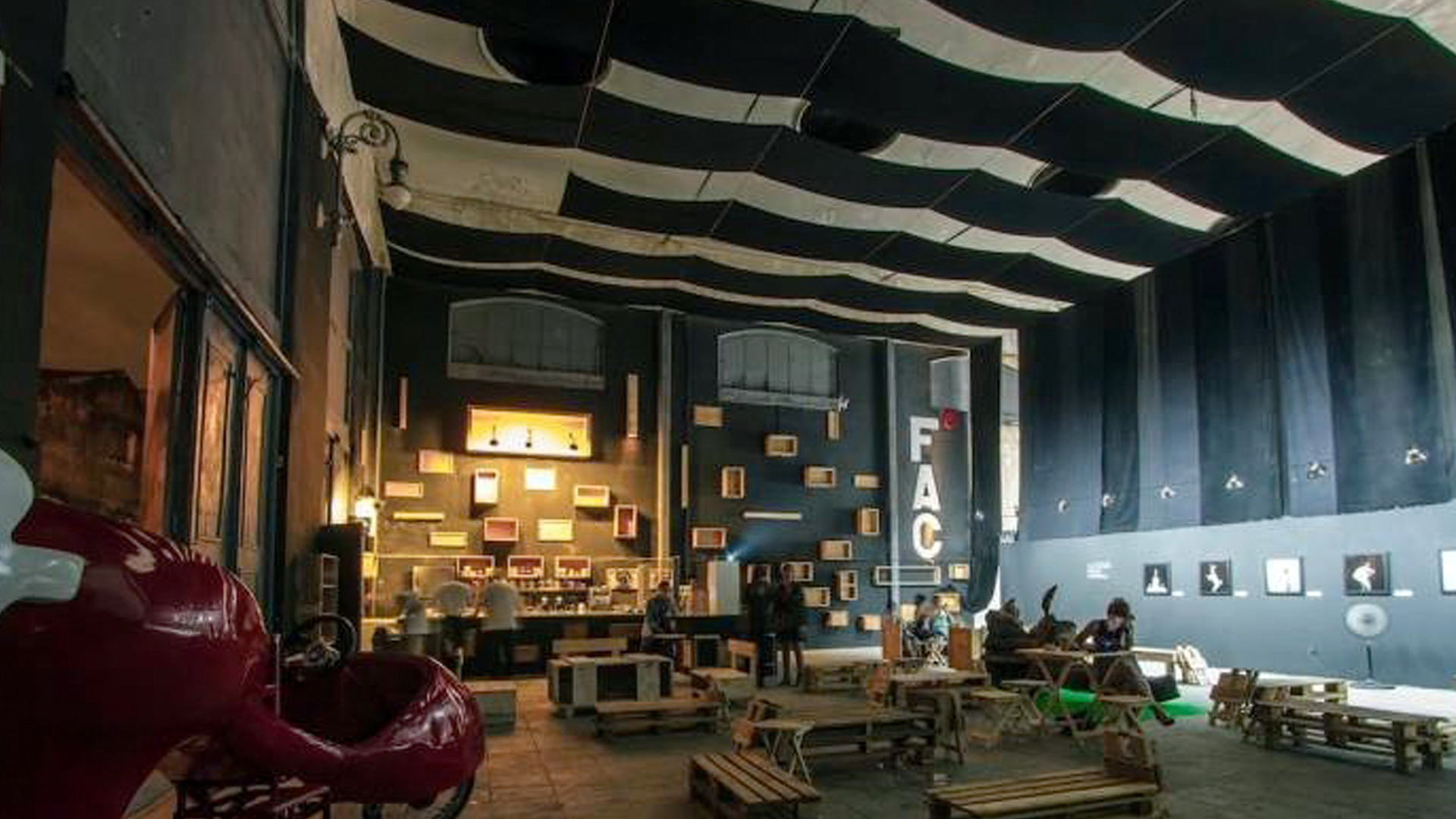 It’s already the stuff of urban legend, Havana-style: A former cooking-oil factory at the edge of Vedado is re-envisioned as an eclectic creative space, and almost instantly becomes a magnet for the contemporary Cuban cultural scene. Architecture, film, dance, fashion, photography, graphic and industrial design, theater, music, and the visual arts are all part of the mix, with programming presented in each of these areas.

Last month, the Fábrica de Arte Cubano—better known as FAC—celebrated its second anniversary, and made its Florida debut as part of the Miami Mini Maker Faire. To mark the occasion, Cuban Art News writer Ketty Mora sat down with two members of the curatorial team, Nelson Ponce and Inti Herrera, to talk about FAC and its evolution since its beginnings in 2014. Here is their edited interview.

I understand FAC started with the idea of ​​educating audiences through the art it displays. Is that still a working concept for the organization?

Yes. Part of our mission is to offer an intelligent and above all versatile proposal that supports this educational idea. We take into account that as the world has changed, so have its patterns of consumption. The field of culture is not immune to this. Today we must be prepared to bring art to people who wouldn’t expect to visit a gallery—to provide it in an inclusive context, and in the most unexpected places. To make it interact with the public, and also to complicate the proposals by having several creative disciplines enter into the dialogue. All this, while considering the nuances of the different projects—some more commercial, others more cutting-edge.

How about the FAC audience? How has it evolved?

In the beginning, when people came without knowing about the project, they behaved like anyone does at a disco or nightclub. Gradually this changed as they discovered the programming and realized that this place offered a bit more than they expected. In those days we developed many strategies to draw the public’s attention and to simply get the word out about the place—to let people know that in addition to being somewhere to kick back and relax, FAC could be understood and enjoyed on other levels. This change in perception has continued, in a positive way.

Today, FAC is a place for social interaction, leisure, and the enjoyment of cultural programming that can be enriching or not, but can help people develop their own taste and judgement.

FAC was originally envisioned as a space for the Cuban creative community. But last summer, the international website Trip Advisor made FAC #1 on its list of tourist attractions in Havana. What is your current audience like with respect to foreign visitors?

The positioning on Trip Advisor made a big difference in the audience, with many more people coming—foreigners in general, but especially Americans. In reality, though, there were a few factors that came together at an opportune time—not only Trip Advisor, but visits from celebrities like Lady Gaga and Mick Jagger. Together with our continued efforts to build an active and varied program, that contributed to the increase in visitors.

FAC is not located in the most fashionable part of Vedado. What impact has the organization’s success had on the immediate area?

There definitely has been a positive transformation in the neighborhood, which has become a happening kind of place. La Fábrica has also generated employment for people in the community. We also have a project that brings local kids into the space, with an eye toward arts and cultural appreciation.

About the art exhibitions—how are the artists chosen? Does FAC staff do all the curating?

Our structure is very horizontal. We have specialists in charge of each area or artistic discipline. We meet and plan everything, and exchange criteria. The results have a flavor of common creation, of interdisciplinarity. We try to explode our own structures and ways of doing things, with the idea of coming up with something new every time. And we’re always open to collaboration and exchange.

FAC has a section devoted to graphic design. Tell us more about that.

Graphic design has been present since the very beginning of FAC. This is not very common in a context like ours, and attests to the inclusive nature of what we do.

This section has become a space for showing young talent, especially in poster art. In fact, the first exhibition in the area of ​​design had posters as a central element. On other occasions we’ve shown works by not only Cuban artists but foreign designers as well—like the exhibition we had of the French [artisanal printing group] Atelier Superseñor. We had the good fortune of doing a workshop with them on silkscreen poster printing, as well as an exhibition. We did something similar with a group of German designers led by Lars Hamsen [of Slanted magazine]. Showing what is being done outside Cuba enriches our own experience.

One outstanding example [of our design program] is the exhibition No fijar carteles [Post No Bills, presented last May in parallel with the Havana Biennial. This show deliberately exacerbated the aesthetic condition of this design discipline, using works that took as their starting point the design of a previous poster. This freed the work of its communication function [so that pure design could take over]. FAC has also hosted the annual meetings of the Club Amigos del Cartel (Friends of the Poster Club). Their most recent meeting this past October brought an influx of designers, students, collectors, and scholars, along with a large exhibition of posters.

Over the past two years, what challenges has FAC faced as it has evolved?

We started very modestly, but with a big ambition: to unite all the arts in one place, offered in a coherent program. We especially try to maintain quality, which is something that can become more difficult as time passes and you get into a routine.

There are always many challenges—from inconsistent material supplies and vendors to ensuring the resources to maintain programming. Which can be complicated sometimes, because you don’t always find the right artist, or have the ability to pay them.

In any case, it has been a road traveled through hard work and collective effort. We’re always a little offbeat in our approach, but we’re very proud of what we’ve been able to achieve so far.

Last month, FAC took part in the Miami Mini Maker Faire, a gathering of South Florida tech enthusiasts, entrepreneurs, and artisans. Tell us about that.

The goal was to reproduce the FAC experience in Miami. Ernesto Jiménez, the architect of FAC, built an innovative geometric display stand out of shipping pallets, and we were able to display works from all of the disciplines involved with FAC. There were film screenings by Inti Herrera, and a sculpted dress by Celia Ledon Acosta. Idania del Río and her partner represented their store “Clandestina 99% diseño cubano”—they sell their goods at FAC as well. Idania and Nelson Ponce printed silkscreen t-shirts and posters, and designers Raiko Valladares and José Antonio Villa brought their Vibra Collection chairs. The fair closed with a concert by X Alfonso.

It was a successful experience for everyone. We were able to bring the FAC experience abroad, and to learn more about ourselves from another perspective and context.

In your opinion, what makes FAC different from other art spaces in Cuba?

To be able to find in one place the interaction of different artistic disciplines. It’s a space where established and emerging artists coexist, where the distance between artist and viewer is shortened. It is a dynamic change in the way the arts are perceived. It’s a kind of oasis.