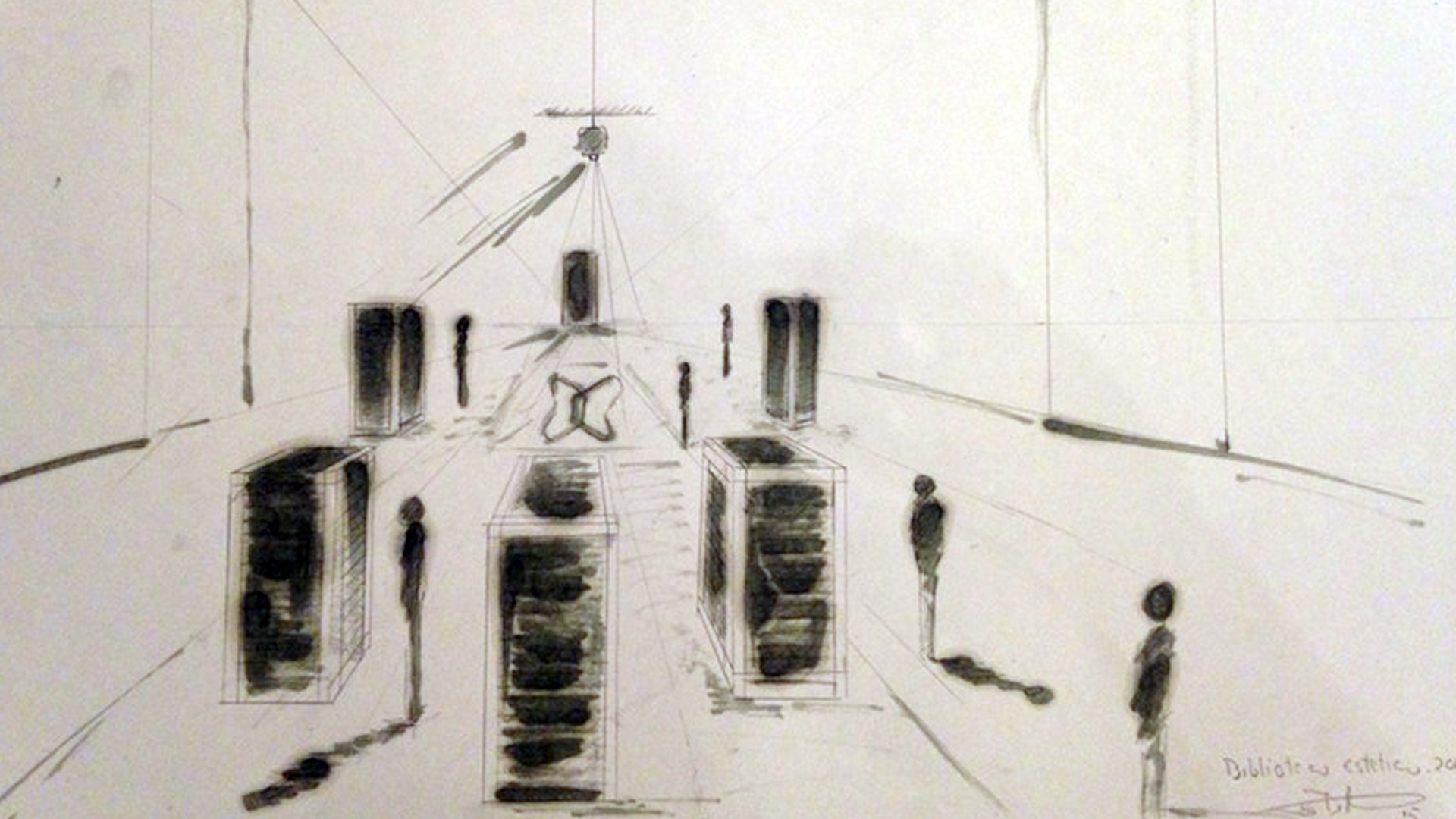 As curators Beatriz Junco and Claudia Taboada see it, contemporary Cuban art has had a “philosophical preoccupation” with painting—and its limits.

In an email interview, Junco and Taboada talked about Jugar en serio / pintura expandida, the themes of the show, and some of the works on view.

Where did the idea for the show come from?

At first, we noticed that a group of young Cuban artists, well known in some cases, were working with painting in a way that questioned its limits, contentions, and formats. We began to study this phenomenon a bit, and found that there were some antecedents for it.

Then we read the US art historian and theorist Rosalind Krauss and her reflections on contemporary sculpture under the title Sculpture in the Expanded Field. Following the thread of this work and its conceptual assumptions, we found other artists who had opened the “expanded” concept to other creative practices. Today, for example, one speaks of expanded painting, expanded performance, even expanded literature and writing.

Lo expandido, or “the expanded,” makes reference to, among other things, the multiplicity of mediums and formulas that can be utilized in art, alluding to the world in which artists live, and the hybridization of a globalized world. But also to the mediums and materials that development has made available to artists.

Rosalind Krauss talks in this regard about an elasticity, in the sense that a cultural term can extend to include almost anything without breaking apart. In the case of the exhibition, this applies to the way that painting expands, hybridizes, and questions itself without ceasing to be painting.

So we’re not talking about a new phenomenon.

Not at all. It´s increasingly difficult to find something totally new. There is so much recycling and reinterpretation, even though it´s interesting.

Although it´s true that “lo expandido” is registering more clearly since the 1970s, as a reaction to, among other things, “the pure” in modernism, at least the hybridation that characterizes “the expanded” comes from many years ago. Marcel Duchamp´s works resulted in a hybridation of mediums and forms. So did works by Naum Gabo, El Lissitzky, and other artists who explored the optimum means of making inroads into this discourse.

As I said before, it was in the late 1960s and early 1970s when this gathered momentum. Specifically in the case of painting, this was reflected in some of the members of Fluxus and Actionism, with many examples of performance and body art, in which the rejection of autonomy, purity, and above all the strict separation of painting from other disciplines was quite evident.

How would you describe the exhibition concept?

The show approaches the issue of painting’s expanded expression—whether through works that hybridize the pictorial act with other forms such as installation, video, photography, and performance, or through polemic works that question the concept of painting.

The objective is to gather expressions of expanded painting produced in the current Cuban context.

The audience won´t be seeing a traditional art show. Instead, they’ll see works that use, as much as possible, all artistic media to strengthen and complete their discourse, breaking the boundaries among mediums to present a more dynamic, flexible, and effective art.

What’s the connection between CDAV, the exhibition, and the Estudio 21 curatorial grants?

CDAV started the Estudio 21 grant program in 2009, with the goal of fostering curatorial projects that encouraged reflection on contemporary Cuban art and the work of young Cuban artists. Every year, the Estudio 21 grants award both an artistic and a curatorial residence. The awards offer economic support for the realization of winning projects, which are usually showcased at CDAV in the year following the grant award.

The project Jugar en serio/Pintura expandida was awarded this residence in 2014 and, with very few changes from its original plan, the show is now open in CDAV’s Sala L.

Let’s talk about the selection of the artists. What was your criteria?

Artists in the show work with very specific poetics, but in their work it takes the form of a constant reflection on and about painting. We searched for the greatest diversity possible in the work of young artists with good creative trajectories, to exemplify the role of painting in the “extended field.”

All of the artists shared the adoption, without prejudice, of mediums that can contribute to a clearer communication of the ideas in their work, without stopping to think if what they’re doing is painting, photography, or video, but focusing on the content of the work and its meaning. Many times, they see the need to break out of the frame of painting and move toward other mediums, without abandoning painting completely.

As curators, what do you see in contemporary Cuban painting that inspired you to do a show called “Serious Play?”

Generally speaking, “expanded art” has been understood as an unmistakable sign of postmodernism. With each artistic manifestation It has incorporated many variations and adopted more critical positions, illuminating an art that has not only renounced ideas of purity and autonomy, but planted the flag of the hybrid, the mezcla, as a sign of its own identity, as a creation rooted in a “new society,” a “new sensibility.”

Our country has not been exempt from this phenomenon. The intention has been to visualize and reflect on the situation that is shaping the painting produced in Cuba these days, and that has put so many creative mediums at the disposal of our artists. “Jugamos en serio,” “we play seriously,” as Flavio Garciandía has done—one of the great Cuban artists, who has thought most comprehensively about painting and its conceptual richness.

Could you give us a few examples of works in the show that do this?

Elizabet Cerviño´s work, Limpiar la noche (Cleaning the Night), is part of a series that takes as its theme a natural element that is impossible for the human mind to apprehend: night, sky, fire, fog. Each work uses painting as an expressive resource and color as a direct reference to the element in question. Every part of the intervention is on the canvas. It’s almost a performative act, without intending to be. The artist begins to clean a fresh canvas, painted with black oil, and proceeds to remove the color of the night with fabrics of different qualities and origins. Then, she lays the “dirty” fabrics along the wall, from the position of the canvas to the other extreme of the wall parallel to the canvas. The gesture is completely metaphorical; the painting was merely a pretext to reflect on the night. Ultimately, it becomes an installation work.

In Lección de Anatomía, Adonis Ferro dematerializes the concept of painting by extracting the elements that comprise it and reducing them to six containers. Of this painting, we can perceive only the dust of the stretcher, the canvas minimized to threads, the scraped painting. It’s the same approach that Dr. Nicolaes Tulp, as depicted by Rembrandt, takes to analyze a body; the artist breaks down painting in an intellective and conceptual act.

With Yoanlay Cabrera, painting is codified into music, with every shade of color associated a musical tone. The artist takes pieces in the Museo Nacional de Bellas Artes as his database. People can select a painting and appreciate its melody.

Rodolfo Peraza is also part of this technological strand of thinking, with his work El imperio del color. This work explores pictorial elements through the relationships in social networks, and creates a network in which the user can interact in a painting-like way, not by means of photographs and filtered images. It’s as if we go back to communicating through sign language and the basics of shape and color.

Adriana Arronte, for her part, re-represents the great paintings of art history by artists like Mondrian, van Gogh, Gauguin, Goya, etc., using colored pills and tablets as the materials for her works. Side effects invites viewers to re-read the great paradigms of painting. The painting element in this work lies in the references and influences that these masterworks have had on later paintings, and the constant revision and renewal that they have prompted.