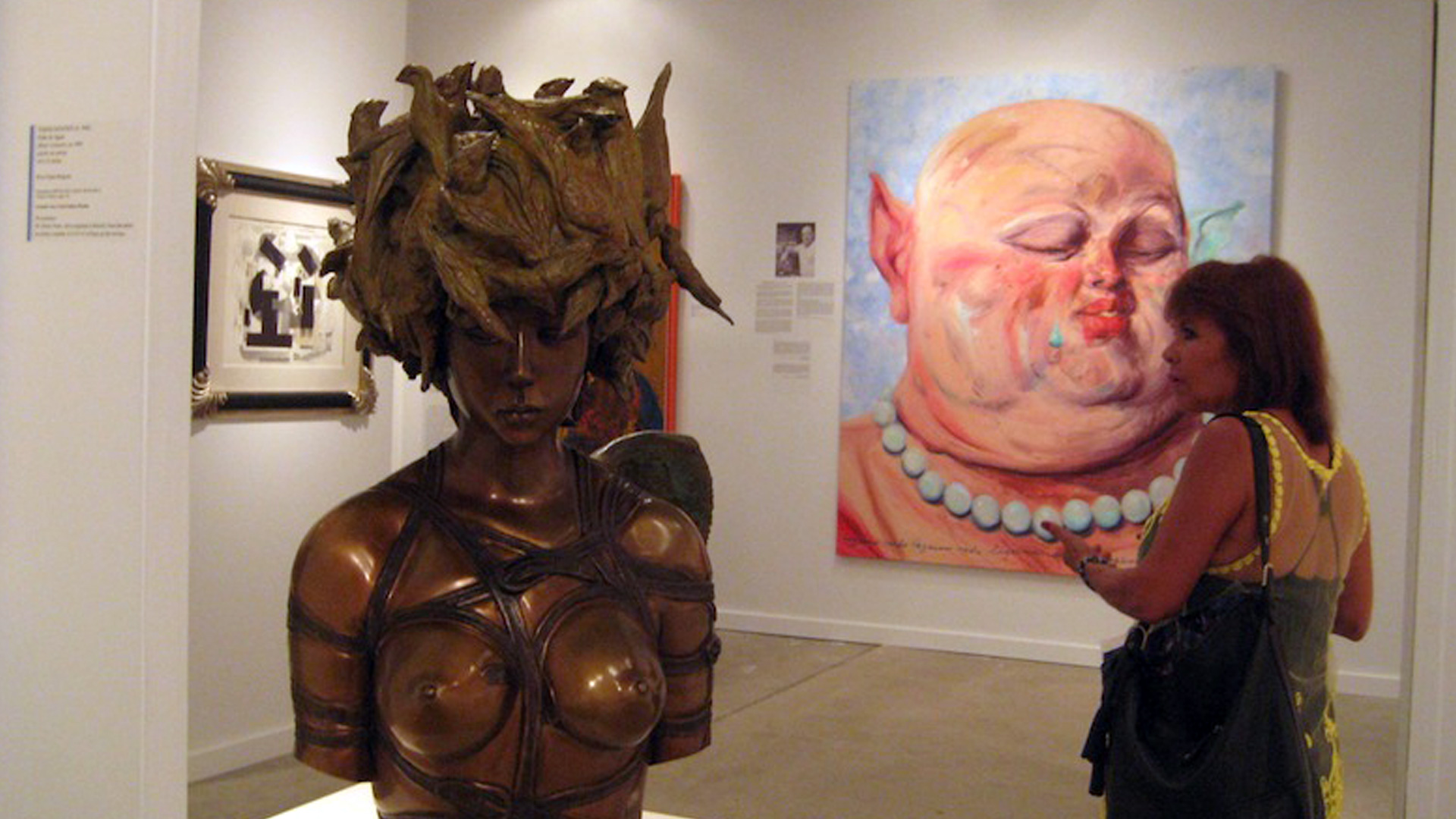 Between fairs, exhibitions, and events, Cuban art and artists were an active, high-profile presence during this year’s Miami Art Week.

Here, we focus on three fairs that were especially important for raising the visibility of Cuban artists: Art Basel Miami Beach, Pinta, and Art Miami.

Other notable presentations included Hecho en Cuba / The Cuban Art Show at X Contemporary Art Fair, featuring 100 works by 12 artists on the island; More Beautiful Than Silence, the installation-performance work by Alexandre Arrechea co-presented by Kreemart and CIFO at the CIFO art space; CIFO’s presentation of the solo exhibition Gustavo Pérez Monzón: Tramas; and A Sense of Place: Selections from the Jorge M. Pérez Collection at Mana Contemporary in Wynwood.

We’ll also have a photo walk-through of A Sense of Place: Selections from the Jorge M. Pérez Collection.

Here, a quick glimpse of Cuban art at the key fairs.

The art of Los Carpinteros could be seen at several fairs and often in more than one gallery booth, but was perhaps most prominently featured at Art Basel Miami Beach, in the presentation by Sean Kelly Gallery (above).

According to a report on ABMB sales posted on Artnet, all of the gallery’s works by Los Carpinteros were sold within the first few hours of the fair.

Fresh from the opening of their new space in Havana, Galleria Continua showed Aniversario by Carlos Garaicoa. Work by José Yaque and Alejandro Campins was also featured.

Paris- and Brussels-based Galerie Nathalie Obadia had several works by Ricardo Brey, including this large mixed-media work. In the background on either side are photographic works by Andres Serrano, and farther back, a glimpse of the gallery’s display of vintage photos of Cuba in the 1960s taken by French film director Agnés Varda.

At the Frederic Snitzer Gallery booth, Snitzer, right, and Mexico City gallerist Nina Menocal and a friend view Untitled (Micro), a 2015 work by Rafael Domenech. Behind them is a work by Carlos Alfonzo, God (turned) Backwards, 1987.

Other notable works at Art Basel included a 2014 canvas by Carmen Herrera and Solar Catastrophe, a 2015 work by Allora & Calzadilla, both at the Lisson Gallery booth; and a Wifredo Lam canvas at Galerie Gmurzynska, which, according to Artnet, sold for $500,000.

At Art Miami, Cuban art was prominently featured at the Cernuda Arte booth. The selection included works by Roberto Fabelo, including the sculpture in the left foreground and the painting at the right.

The booth for Tresart gallery featured work by mid-20th-century abstractionists.

Contemporary Cuban artists were a focus at Pan American Art Projects, including the painting at right by Gustavo Acosta.

This year’s edition of Pinta was a thoughtfully curated mix of exhibitions, gallery displays, performances, and discussions.

As part of the «Time Sensitive Project»s section, Carlos Martiel presented Dictadura (Dictatorship), a performance that took place for several hours each day.

Dictadura focuses on the history of dictatorship in Latin America as well as the diversity of the Latin and Latino communities in Miami. In the performance, Martiel lay naked and clamped to a flagpole, which flew a succession of flags of Latin American countries currently under dictatorships.

In addition to work by Florencio Gelabert and Ofill Echevarría, the exhibition included this work by Ernesto Oroza, from his series Architecture of Necessity.

Curator Osbel Suárez presented Cuba: Concrete Exercises / Ejercicios Concretos, a focused look at a group of artists active in the late 1950s and early 1960s, which has come into the spotlight in the past year or two.

For more about Cuban art at Pinta, see the two photo albums on the Cuban Art News Facebook page: one from last Tuesday and the other from last Friday.

In the coming weeks, look for more in-depth coverage of two provocative panel discussions, and for a glimpse of Cuban art in the collection of Jorge M. Pérez. Meanwhile, here’s a 6-minute  video report on the fairs by the PBS News Hour. Look for Alexandre Arrechea and his CIFO project at about 5 minutes in.