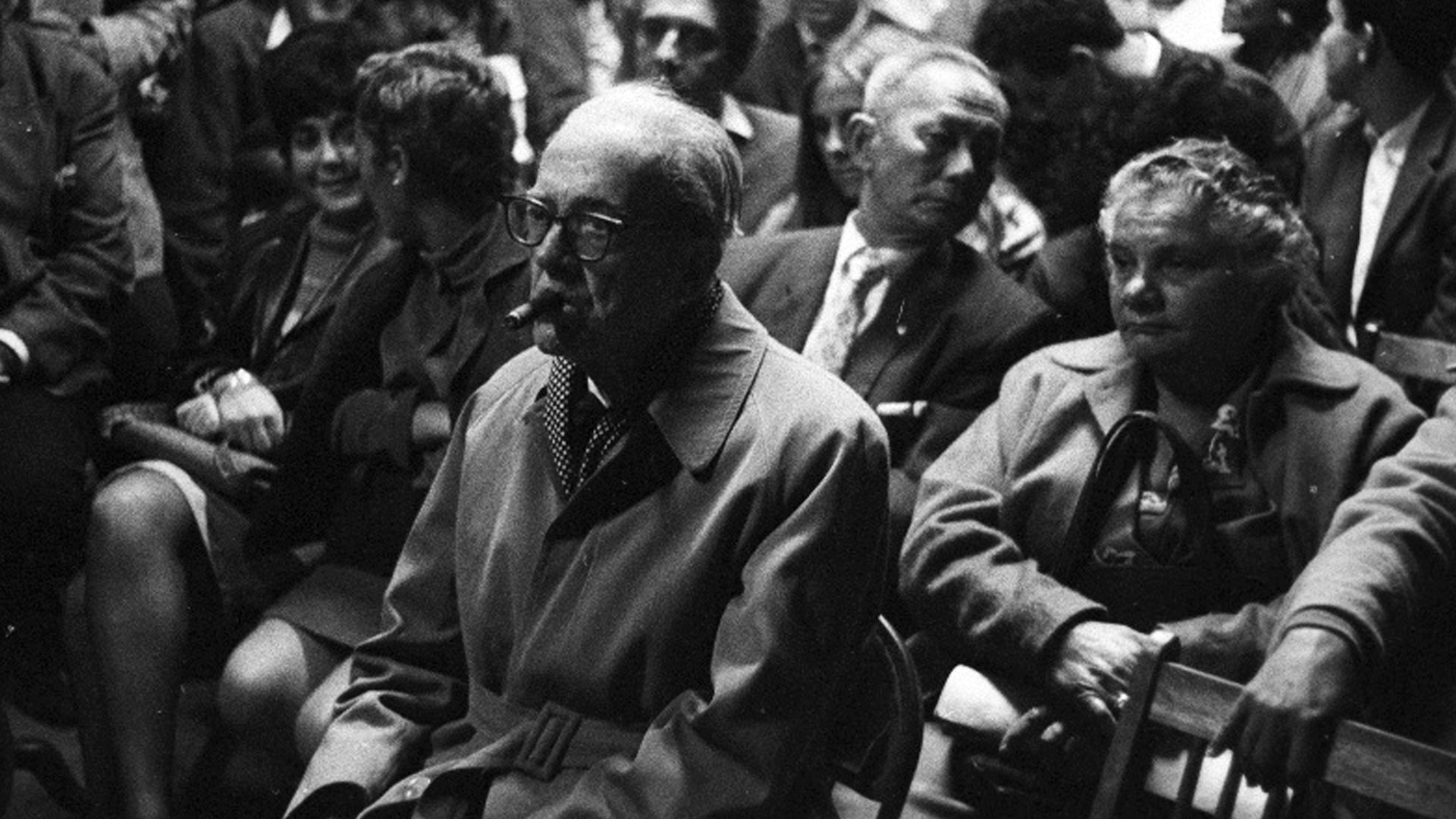 Blacksmith by day, musician and music lover in his off hours, Alfredo González Suazo—better known as Sirique—ran one of the most important spaces for Cuban music in 1960s Havana in his blacksmithing shop. One day, a young photographer, Ernesto Fernández, turned up and started shooting. José León Díaz spoke with Fernández about that day, in an article adapted, with permission, from Revolución y Cultura magazine. Added bonus: a classic video documentary on «La Herrería de Sirique.»

This amazing series of images, courtesy of photographer Ernesto Fernández, started much earlier in time: with a character, Alfredo González Suazo, known in the history of Cuban culture as Sirique. He was born in Havana on September 29, 1895, in a house on Trinidad Street between Consejero Arango and Carvajal, in the neighborhood of Carraguao, El Cerro, where he spent virtually his entire life.

At ten, he began apprenticing to become a blacksmith in the Leo Leoni foundry, where he was taught by expert blacksmith Jaime El Catalán. By 1912, Sirique had already become a mechanic in the Ciénaga railway workshops, where he became head of the Department of Machinery.

With his co-workers, he formed a baseball team and also acquired the nickname Sirique, which he had inherited from his father, Valentin González, a renowned baseball player and referee, and a member of the baseball Hall of Fame. A chauffeur for hire in 1927, Sirique installed his own blacksmith shop right there, where his baseball club was.

Sirique was a big music aficionado. And he was a born promoter, so charismatic that he maintained good relationships with all the musical luminaries in those years. He even had a space in the CMCQ radio station, where he invited his musician friends.

In the wake of the 1959 Revolution, Sirique had the idea of ​​organizing a club for traditional music that met every Sunday, and his blacksmith workshop on Santa Rosa and Infanta was the place he chose for this new adventure. Every lover of Cuban music could attend and enjoy it, free of charge. Alcoholic beverages were prohibited; the audience was there only for the plaisir de la musique.

Complementing the musical space, in 1962 Sirique decided to form a team of retired soneros, who once had been real stars. Ironically, he named them “The Tutankhamun.” Their motto was, A master on each instrument and together a home for old folks. The Tutankhamun group was a sort of antecedent to the Buena Vista Social Club. Its members included first-rate musicians such as the great tres player Isaac Oviedo, Albino Luis Peña, and the famous drummer Chori.

The musical club continued to grow, to the extent that television and film picked up on it. Esther Borja, the grand dame of Cuban song, made one of her programs, Album de Cuba, from the blacksmith´s shop; and the Cuban Film Institute made a documentary there in 1966, La herrería de Sirique (Sirique´s Blacksmith´s Shop). Directed by Héctor Veitia, it had photography by Mario García Joya (Mayito) and Marucha, editing by Roberto Bravo, and sound by Germinal Hernández—certainly a valuable record of the performances the director chose to retain for history. (See the video below.)

Sirique´s musical space became one of the most famous in Cuba. For years, he brought together the most renowned Cuban troubadours every Sunday, including the Trio Matamoros, Sindo Garay, María Teresa Vera, Odilo Urfé, and the bolero singers Bienvenido Julián Gutiérrez and Juan Pablo Miranda, among others. Other notable participants included rumberos Agustín Pina, Flor de Amor, Mario Dreke, and Osotolongo. As if that were not enough, tributes were also held there: to Sindo Garay on his centenary; to the trio Matamoros; to Blanquita Becerra, popular star of the Alhambra; and to the leading composers Graciano Gomez, Oscar Hernandez, and Gonzalo Roig.

One night in January 1967, the young Spanish writer Juan Marsé, a juror for the Casa de las Américas Prize, invited other members of the jury to Sirique´s musical space, along with another young Cuban: photographer Ernesto Fernández.

Ernesto, although he knew of Sirique and his musical club, had never been there. He tells me:

«The place impressed me very much. And I do not say so only from my position as a photographer, but also for the context. It was a place for workers, actually a workshop, but all were very well dressed. The atmosphere was similar to that of the Bronx, as a North American friend who saw the pictures told me recently. The music, lights, and the smoke created an extraordinary atmosphere. Coincidentally, and fortunately for me, that night they were paying homage to one of the all-time greats of Cuban music, composer Gonzalo Roig—who, by the way, was not just a great musician but also very photogenic. It is something that I will be eternally grateful to Marsé for, whenever I see these images.»

I asked Ernesto for a few technical details, of the type that budding photographers are curious about. He said:

“I don´t remember which camera I took those photos with. I know that it wasn’t one of my favorites, because those were destroyed during the Playa Girón (Bay of Pigs) battle, and it took me years to find others that pleased me. The negatives indicate it was 35mm, and it is likely that I was testing the camera that night.

“I think that it was really a tribute to Sirique and to all those who gave so much love to Cuban music, rather than a job. I took all the photos in only one session. I never went back to them, or saw them afterwards. Almost fifty years later, when my son, Ernesto Javier, was given the task of restoring all my pictures (using new technologies), I saw the photos and was very surprised. After my mother´s death, I found the strips of negatives in her house. It was like a miracle of God.»

Sirique´s musical space was closed in 1968, after the so-called Revolutionary Offensive, when the blacksmith workshop was nationalized. The management that the Revolution put in place there did not think about continuing the club, or allowing others to continue it, or any other cultural institution. However, a curious detail: Sirique, the great musical promoter, died the same day that the first Benny Moré Festival of Popular Music began, in Lajas, Cienfuegos, on February 18, 1980.