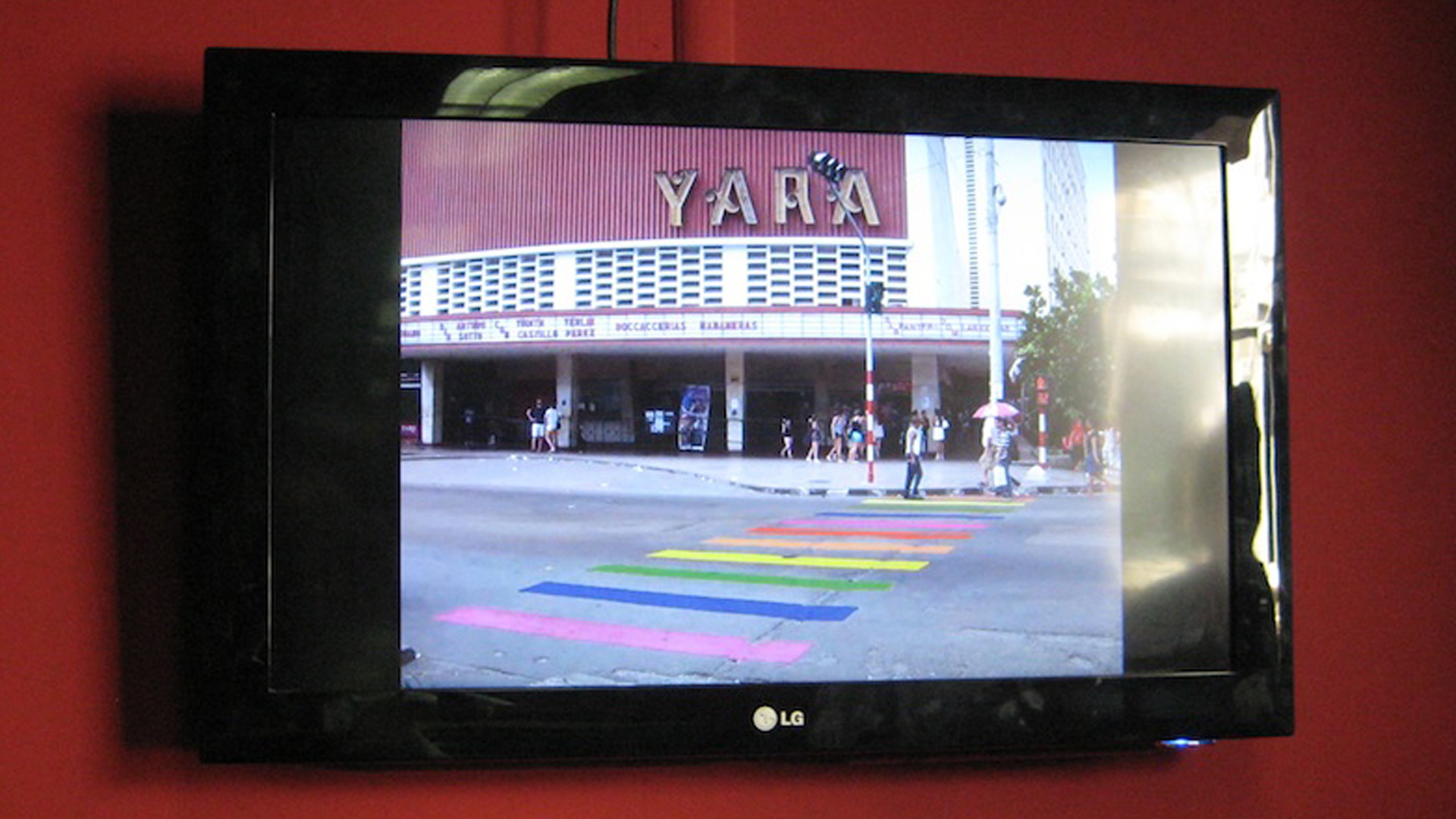 At the Cuban Pavilion, a pair of curators encouraged Cuban, Cuban-born, and foreign artists to bring fresh thinking to the idea of art as a mechanism of cultural, social, and economic exchange. The results ranged from video installations to a short-term cottage industry.

In organizing the exhibition Entre, Dentro, Fuera / Between, Inside, Outside, Havana curator Dannys Montes de Oca and US-based curator Royce Smith had in mind certain ideas about art.

They were interested in art that was participatory, interdisciplinary, and process-driven, rather than visual—and that could re-examine and perhaps reframe the possibilities for Cuba-US relations.

The group profile of the artists they selected paralleled the “Between, Inside, Outside” of the exhibition title: Cubans living in the US, Cubans on the island, and artists of other national backgrounds living and work in the US.

On the morning of May 23, a crowd eagerly awaited the show’s 11 a.m. opening, quickly making its way up the steps of the Pabellón de Cuba (Cuban Pavilion), the open-air exhibition space that is itself a post-Revolution modernist landmark, and is included in the current MoMA show on Latin American architecture.

Among the works in Between, Inside, Outside, Glenda Salazar’s Proyecto Border/Border Project, 2015, took a poetic approach to the show’s theme. A suite of gracefully rendered drawings depicted more than a dozen trees native to Cuba. Alongside, a small wall-mounted container offered packets of seeds from those trees, delicately pressed into handmade paper, free for the taking.

Planted on the island, the seeds could be seen as affirming a sense of cubanía. Planted elsewhere, they may be understood as metaphors for extending that sensibility beyond the island, and for bringing (or maintaining) a sense of Cuban-ness in other cultures.

Other projects took a more pragmatic approach. Hecho en Cuba*/Made in Cuba*, 2015, an interactive installation by Philippines-US artist Stephanie Syjuco, was an impromptu empresa that manufactured “unofficial” Bienal souvenir tote bags. Made by local workers on the spot, the bags were offered for sale to exhibition visitors.

Levi Orta’s “action-installation” Capital=Cultura, 2015, proposed an economic exchange of a different order. Utilizing a type of information counter and video display common to airports and other commercial spaces, Orta’s project presented the show’s visitors with an opportunity to invest in Cuban businesses, and for private business owners to find investors.

Behind the counter, project participants helped would-be investors fill out forms asking for contact information, sectors of the economy they were interested in investing in, and the approximate amount of capital available for investment. Similar forms for business owners requested descriptions of their enterprises, estimated revenue streams over the previous 12 months, amounts of investment required, and other information.

Making use of the Cuba Pavilion’s open-air stage, Susana Pilar Delahante Matienzo presented Contacto (Cajón para Ana Mendieta), a religious ceremony for the Cuban-born US artist who in the 1980s had been among the first to establish ties with the artists of Cuba’s then-emerging contemporary art scene.

As part of the ceremony, the audience was invited onstage to participate in the cleansing ritual. (For more images of Contacto and Between, Inside, Outside, see the photo album on the Cuban Art News Facebook page.)

In mid-June, Delahante Matienzo presented a second performance at the Pabellón de Cuba: Lo llevamos rizo (We Carry the Curl), a “public intervention” that took the form of a competition of natural-style African hair. Some 70 women of all ages competed in three categories: natural, braided, and dreadlocked hair (a category for which there were no entrants).

According to an article by Andrea Rodríguez of the AP news service, winners were chosen by applause from the audience of approximately 300.

“Delahante and participants in the competition described it as a way of rebuilding pride among Afro-Cuban women in a society where kinky hair and black skin often are seen as less beautiful than straight locks and pale complexions,” wrote Rodríguez, quoting one competitor as saying “This is a first step in reclaiming this type of hair.”

Another competition by Delahante Matienzo was on the program this past weekend: Usted la lleva(You Carry It), a contest of strength for women, scheduled for Saturday, June 20.

Other works in the show included an installation and video by Guillermo Ramírez Malberti that put a colorful twist on the corner of 23rd and L, a major intersection a few steps away from the Cuban Pavilion, and ¿Y por qué la luna? Why the Moon?, 2015, by Cuban-Canadian Omar Estrada.

Described as an “interactive tableau vivant,” Estrada’s work took as its starting point the Raúl Corrales photograph El sueño, which Estrada described as “very significant” for his generation. The intention of the work, he said in an interview first published in La Jiribilla and then in Cubahora, is to “force the viewer to re-evaluate his (or her) construction of reality.”

“The conquest of the Moon became a kind of romantic metaphor for humanity, but in the end it was a sort of competition to see who went farther with a rocket and who had more power. This idea masked reality, and what I do is take this image that looks so calm and ask why the Moon,” Estrada explained.

In an interview with Julienne López Hernández for Art on Cuba magazine, the curators stated: “The participatory, interactive, disciplinary and procedural character of the projects and works generated will be aimed to explore different forms of knowledge and apprehension of realities, different types of crosslinks of creative perspectives and different models of participation and emotional stimuli, thereby encouraging virtue, joy and life expectancy, and the art space as a context of human relations.”

For more images of Between, Inside, Outside, see the photo album on the Cuban Art News Facebook page.