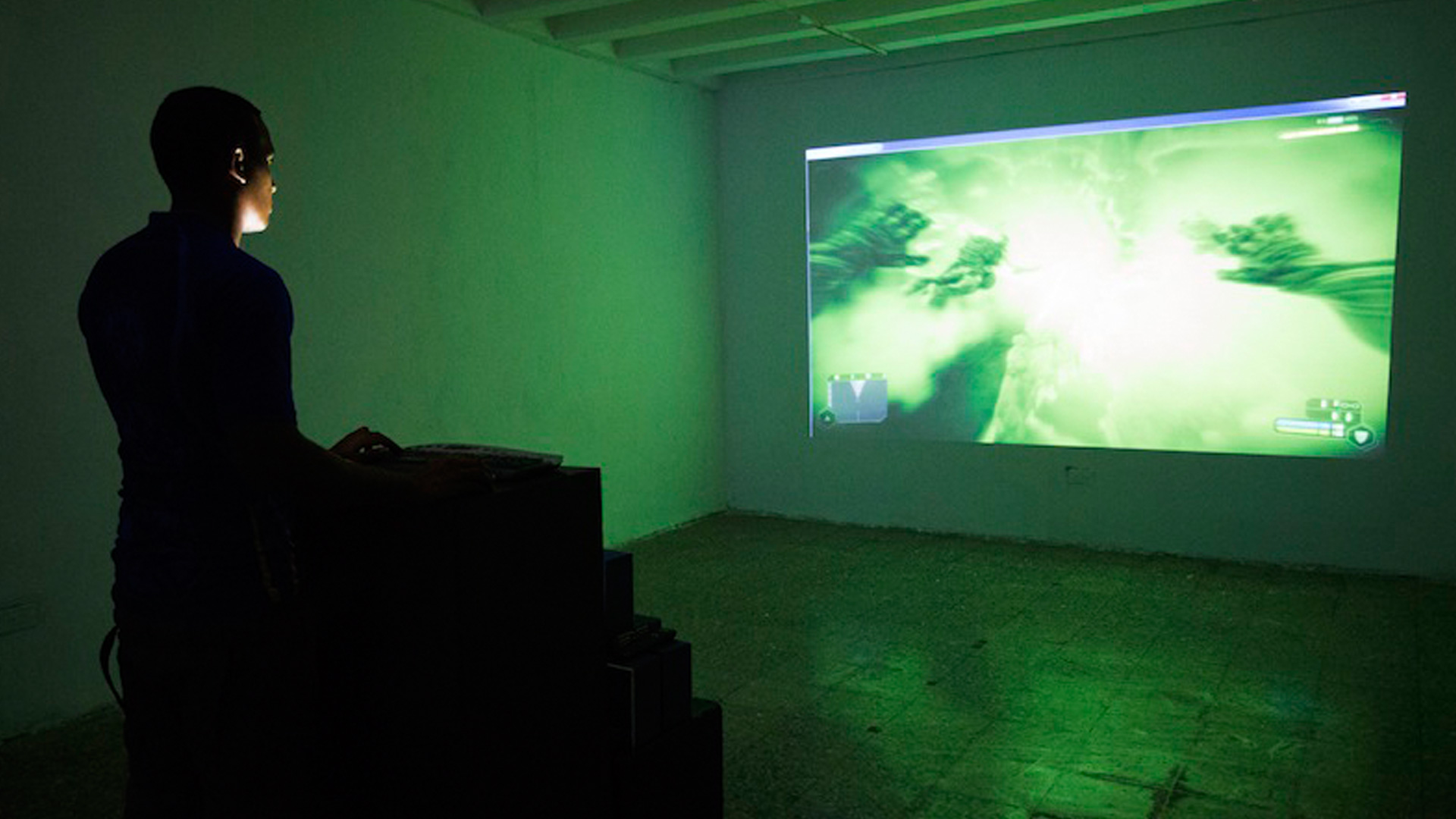 This past fall, one of the highlights of the 6th Salon of Contemporary Cuban Art was Caridad Blanco’s exhibition Las otras narraciones: Una década de animación independiente (The Other Narrations: A Decade of Independent Animation). Continuing the conversation with Abelardo Mena, the curator talks about organizing the show, finding the audience, and understanding animation in both the Cuban and international contexts.

Where is animation taught in Cuba?

Animation is not a course of study in any school in the system of art education. Although there should be a department for it, especially for its importance in new media nowadays.

However, training is received, in general, in schools of art with respect to drawing, painting, modeling, and performance, in the management of emerging technologies and various digital programs. This forms a basic support for animation that many artists have had for several years.

A large group of animation artists come from art schools, the Academies of Fine Arts in different regions of the country, the Higher Institute of Art (ISA) and the Higher Institute of Design (ISDI), and the Faculty of Audiovisual Communication (FAMCA). There are also others linked from other specialties—Sociocultural Studies, Social Communication and Architecture, among others.

Only the animation studios at ICAIC and ICRT offer training in this regard, courses and workshops related to the type of animation that these institutions develop to support the work of their own productions.

Is there any festival related to Cuban animation, as the Lucas Awards for video clips?

Animation has emerged in some way in almost all moving-image festivals taking place in the country. As a platform for recognition in the field, the most visible is undoubtedly the Festival of New Latin American Cinema. There are, however, several events, born over the course of more than a decade, in which animation can be distinguished as a medium that is not confined to the world of the cinema, with opportunities for other types of work.

In 2002, the Lucas Project initiated its award for best animated video clip. Also, the Digital Art Salon organized by the Pablo de la Torriente Center has shown animation works since 2003. ICAIC´s Muestra Joven has had an award for best animation since 2004. And we can’t overlook animation in the International Video Art Festival in Camagüey, although this event has a policy of not distinguishing between works or media.

Special mention goes to Cubanima, the only festival on the island dedicated to animation. Started in 2004, it’s organized by ICAIC´s Animation Studios. It began as a competitive international event, and then became an event for Cuban animation only, where the public decided the awards. Its last iteration took place in 2012 and was open to all audiences—broadening from a narrow focus of work intended only for kids and teenagers and attempting to recover an adult audience.

At present there is only La Espiral, the children’s audiovisual festival organized by director Ivette Ávila. With an international reach, this festival brings together and grants awards to works whose filmmakers, pretty much, are children. Its third edition is slated for March 2015.

What are the international benchmarks for independent animators in Cuba?

There is a long tradition in this country of enjoying comics and cartoons, fostered through film and television. The American productions—which were the main model of many animation directors in the 1960s—were more or less replaced after 1959 by the so-called «muñe and Russian comicsquitos,» a label identifying Soviet cartoons together with those of other European countries (Czechs, Hungarians, Poles and the former RDA).

That record was extended to the late 1970s and early 1980s. Then Japanese cartoons joined the list. They’re still very popular today, circulating strongly on alternatives to official channels. The same with the recent American animations from Hanna-Barbera, Cartoon Network, Disney, and Pixar, that have been making their way here since the early 1990s.

For such different creative fields, what criteria did you use in organizing the show? Could you clarify what’s involved in each of these areas?

The exhibition presented all participants as audiovisual artists, no matter what creative field they work in. There were three fields: first, the field generally associated with art, whose boom corroborates what some have called the «audio-visualization process.” This includes music videos, video animation, video installations, experimental shorts, net art, interactive projections, video essays, mapping, and audiovisual performances. All of them are recognized within video, a horizon whose amplitude is much greater than is usually assumed in our context.

The second field focused on TV: spots and public service messages, including audiovisual material made by designers for commissioning institutions. In the exhibition, credit sequences to TV shows and some series appear alongside other types of short ads and announcements.

In this same group are music videos made at the request of the musicians and record companies involved. Not all music video producers are as entrenched in TV as one might think. They also include filmmakers, designers, musicians, and other visual artists.

The third image space is formed by the ambit of the film industry: documentaries, shorts, and feature films. In some, I highlighted only the visual effects, created by artists who work independent of the industry.

When speaking of authorship, it’s good to emphasize other equally relevant details. For example, the exhibition treats various promotional or advertising methods traditionally not valued as artistic with the same legitimacy given to what we call video and film. Thus, an important group of animation artists were included here for the first time. The work of designers, the effectiveness of animation in campaigns and the promotion of culture in general, had not been fairly recognized. Animation is much more than cartoons and products for children and adolescents. That’s clear from this project, which distances itself from the stereotypes generally used in this context.

Some artists handle the entire process of the work by themselves. Others have the idea, develop it and manage it carefully, then seek an experienced animator for production. Some projects are creative duets that use some kind of creative service, such as editing, to complete the work. And there are those who work as a team, with several hands. But I considered all of them equally the authors of the work. There also are permanent groups, including some that have become recognized as independent producers.

Several works in the exhibition could be called «experimental animation.» Making this type of classification isn’t a motivating force of the exhibition, but the aesthetics of certain artists approach, to some extent, our notions of this category. I wanted to look, above all, at the vision that artists have of the world and the state of things in it; what measures they use to problematize about that reality (glocal); the concepts they develop, the poetry they exhale, the concerns they pose about gender; what they construct for communicating with the public, the expressive posibilities that they mobilize in the service of their ideas, which transcend mere entertainment, industry standards, and mass media.

These artists’ expertise could be recognized, the same as in the short films of Ángel Alonso or Yolyanko Argüelles, or in the animation videos by Saavedra, Fernando Rodríguez, Sandra Ramos, Glenda León, Diana Fonseca or Yamil Garrote; in such documentaries as Delirio by Alejandro E. Alonso and Lazaro Lemus, Uvero by Arian Enrique Pernas; in the installation art of Duvier del Dago and Reinier Nande; or in films like Memorias del desarrollo by Miguel Coyula, among many other works.

How did you see the audience for such a large and wide-ranging exhibition?

The exhibition is made up of different sections or segments. In themselves they also constituted reading suggestions. One circuit was for television, with spaces that resembled movie houses or living rooms with the TV in front. These spaces alternated with zones of individualized projections that highlighted specific artistic procedures. Each spectator fashioned his or her own tour through a flexible space.

Our goal was to promote the greatest possible aesthetic enjoyment of the visual elements, whether they were seen on monitors or LCD TVs or as projected works on individual screens, and in the placement of the installations and interactive pieces, as well as the public spaces chosen for mapping and the performance of electronic music. Printed texts and information available in the exhibition led viewers on their visits, offering critical information to enable them to get the most out of the experience.

What additional activities, events, and experiences were presented with the exhibition?

The exhibition was designed in conjunction with a series of theoretical symposia, as an alternative to expand and update, in more than one sense, the information that the exhibition put into circulation.

There were nine presentations made by artists and experts in the field, some of them with special days for catching up on what’s being done in that field, in both Cuba and in the world. These topics included stop-motion, presented by Ivette Ávila and David James, and 3D animation and visual effects by Victor Lopez. Lázaro Saavedra spoke about his experience in video making, and also gave a report on the major exhibitions that, with different approaches to animation, have been produced in different parts of the world since the year 2000.

The value of animation as a form of expression in our context was also emphasized with respect to promotion and advertising, in a speech by Raúl Valdés (Raupa). Experts like Aramís Acosta presented the animated works of the 1960s and the creative experience of the artists linked to the ICAIC department of animation. The interventions of Mario Masvidal (“The animation today: continuity and rupture”) and Dean Luis Reyes (“Animation as the essence of cinema”) made it possible to tune into some of the critical thinking around animation in Cuba today.

A panel conducted by Magaly Espinosa concluded the cycle, discussing from various perspectives the possibilities of animation as contemporary audiovisual creation.

What was the impact of the show?

It was a well-received exhibition, with multiple reviews and media attention. Its impact rests in its integrative approach to contemporary Cuban audiovisual production,and its approach to animation in the broader context of visual culture. With this approach as the foundation, it was possible to use the exhibition as a bridge connecting the visual arts, television, and film, highlighting the most significant moments in a decade of independent animation on the island.