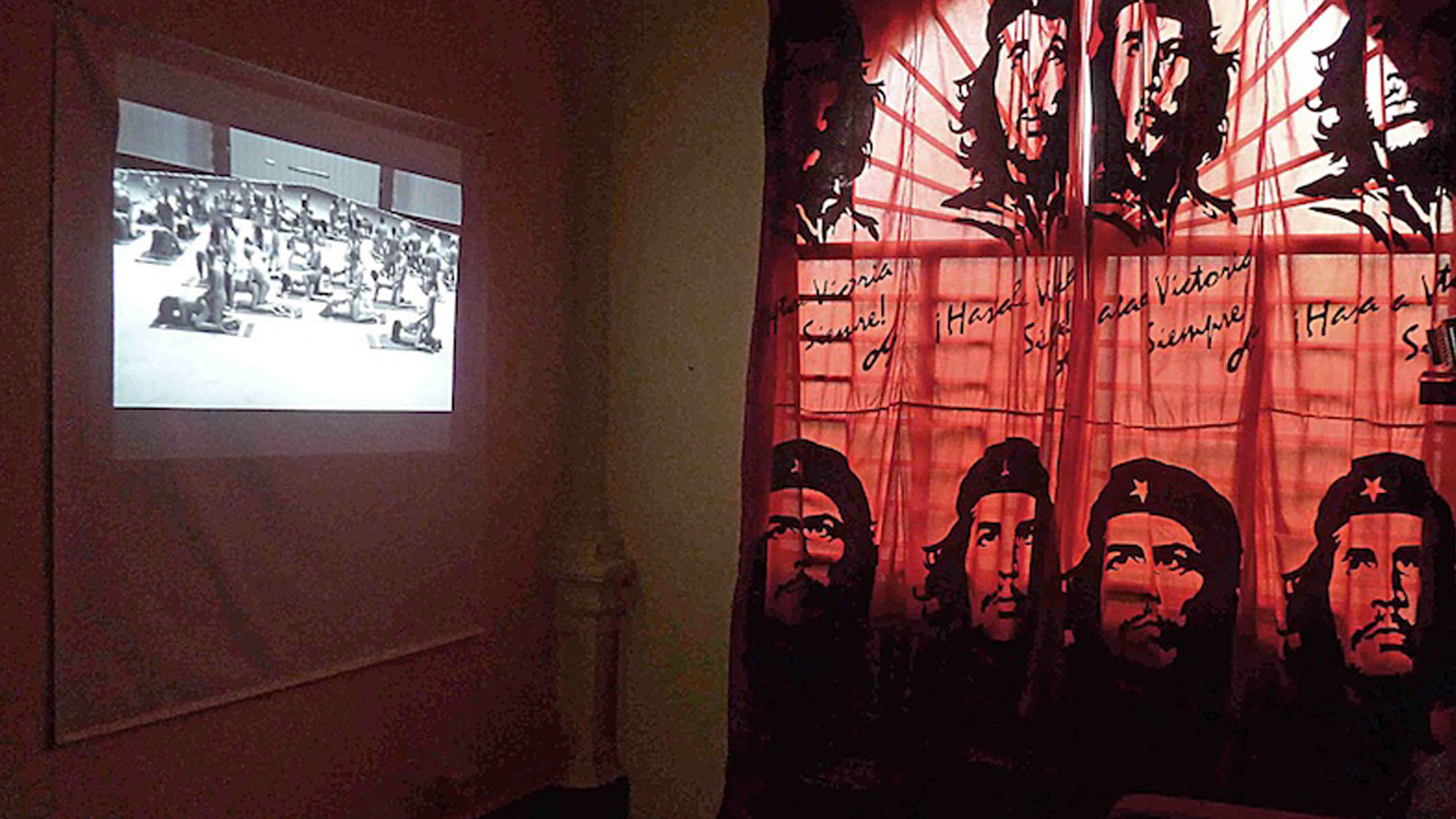 In Part 1 of our 3-part interview with Sandra Ceballos—the moving force behind the pioneering independent gallery Espacio Aglutinador—she recalled the gallery’s beginnings and early years. In Part 2, Sandra talked about key projects and exhibitions of the late 1990s and early 2000s. In this final installment, the artist discusses recent exhibitions, the new Museo de Arte Maníaco, and Curadores, Come Home!

When we left off, you were telling me about the Torneo Audiovisual curated in 2009 by Giselle Victoria as a combination video exhibition and sports tournament. What came next?

La Perra Subasta, following the 10th Havana Biennial (2009). You participated. The idea was to question the biennial, and the way that art fairs had become biennials and biennials art fairs. Biennials are supported by a whole mercantilist system—I’m not specifically referring to the Havana Biennial, but biennials in general. At the same time, many of the most serious art fairs are developed around a concept, and stay focused on maintaining superior artistic quality.

So, my exhibition was conceptual, a show where no one would sell anything; hence the name Perra Subasta (Dog Auction). It’s ironic to say that here everyone sells everything. Sarcastically, we said: Come and buy, here are the pictures that you’ll want to buy. The problem was that most of the works were very hermetic, very conceptual with little chance of being commercialized.

This exhibition is a clear example of what I meant by having a provocative, aggressive, and ironic position, with a specific target, with each project at Aglutinador-Laboratorio.

After that comes what I consider the third stage: Aglutinador—Country, which began in 2011 and it is still a work in progress. The idea is to become more reflective, to close the walls of excessive tolerance. In opposition to that position, we created Curadores, Come Home!, an exhibition series in which we invited curators to return and create shows demonstrating their points of view. For me, it’s a way of showing two antagonistic viewpoints can coexist in the same space—that’s my metaphor. The idea is to seek harmony from positions that are opposite, different, to encourage movement so that things don’t become paralyzed.

As a parallel project, I’m working on the creation of the Maniac Art Museum, or MAM, which is focused on outsider art or art brut. In this project, Aglutinador works as a manager, a bridge—as Aglutinador Brücke. Everything is based on my interests, which have been changing and developing with the times, and my interest now is to collect. The idea is to find authentic artists who are beyond the usual art-world scene. I am interested in art made by anyone, graduated from a school or not. Maniac Art is an inquisitive, psychic, introspective art, having to do with the existential world. It’s what I call mentes peligrosas—dangerous minds.

The first exhibition was a solo show of mine, which was also a statement of principles. It was called MAM: Museo de Arte Maniáco. The group show Mentes Peligrosas followed, then Mentes, primera fase, and now Brujas, pero también brujos, both presented in the Línea 106 gallery.

It seems that from this point, Aglutinador is no longer a physical space but becomes a vision. Could you clarify that idea for us?

Sure. The idea is to take a path where everything starts to become more open, more ample in every sense, but without losing its rigor. We had to take Aglutinador out into the world beyond [my house], and I started looking for new spaces for it. Sometimes these roads merge, creating a bridge, and that’s happening now with Aglutinador Country and Aglutinador Brücke-MAM. The idea is that Aglutinador doesn’t lose sight of its objectives by splitting into several parts, but it mutates.

The paradigm is renewal, not stagnation—to search out new ideas, to not get bored. All these changes to Aglutinador have to do with changes in my life, in my self. Going out and working in other spaces is a form of rebirth.

But there is a link between Aglutinador and other spaces in the city.

In reality, I collaborated with many of these spaces. In some I participated as an artist, in others as an advisor, making recommendations and offering material support. I’ve also promoted them, taking people there so they’d become better known. Now, Aglutinador exhibits only at Línea 106, although the work with Riera Studio has been very close. Now my idea is to not only stay in Havana but go to provinces.

Essentially, I see two Sandras; one linked to Aglutinador, which you personify, and the other as the artist. Both move in parallel, each with her own personality, and very often they come together as one.

Yes. I’ve never stopped doing my work. What happens is that my work in Cuba has been canceled; it was a way to punish me for misbehaving and having made an independent space. Yet I have always been able to keep contact with the outside world, as well as travel abroad and show my works, but all of it outside official channels. In Cuba, after opening Aglutinador, I could do very little.

When Aglutinador gathered momentum, they swept me away. I didn’t exist. They said I was a dissident. All because I organized exhibitions with artistas malditos (cursed or blacklisted artists).

Really, if you’re dissident, it is with the art establishment in Cuba. Just to break the mold of the established system.

Look, when I was accused of being a threat to national security, one an art critic said: Aglutinador is not about politics, Aglutinador is politics. I understood that phrase very well, because the fact of opening and maintaining a separate place in the Special Period, where things were very difficult, was challenging. A challenge also for my decision to invite a large working group of artists, including some artistas malditos. That was to make politics without making politics, you understand. That’s why I liked the phrase.

It is that your position is irreverent, in a country like this in which the government is the only owner and considered the only guiding political culture. Suddenly a free atom appears, saying: This is my space and here I make my rules. You were very intelligent about it, because otherwise we would not be talking here. You could be in prison.

Really, I never had problems with having a party at home and inviting friends, or making a presentation. What they were against was my establishing a market.

But was Aglutinador a commercial space where people come to buy art?

That’s the way I see it. Aglutinador has always been a place of cultural experimentation, experimentation in art. Maybe you sold a piece or two, but it was not a commercial space.

It´s true, I cannot say I have not sold works. I sold some pieces of mine and from my collection. But this is not a commercial space.

It’s not a commercial gallery like Galería Habana or La Acacia, for example.

That’s right. We don’t work with commercial artists and don’t pursue financial gain. Here, people come looking for another type of artist, those who are not simply commercial. Generally I work with artists who don’t make works for market, although this is also a segment of the market.

Tell us about your recent projects.

Last fall I organized an exhibition about witches, Brujas pero también Brujos (Female Witches But Also Male Witches). For this, I worked at Línea 106, since the space is a big, old house with an air of mystery. The idea of the exhibition was to present Death, the Spirit, or Éggun as an essence or foundation of all the religions and ceremonial rites of the world: the Regla de Osha, the System of Ifá, the Wicca, the Regla de Palo, Voudou, Spiritualism, Christianity, etc. It’s understood that after the 1959 Revolution these religions were seen as wrong, and their practitioners were, among other things, pursued and expelled from schools and universities.

Yes, I saw that. I can testify to all of it.

Exactly. You know. The thing is, it’s being accepted now—not only accepted but also commercially manipulated. The tourist shops are full of little dolls representing the Orishas. They’re being mercantilized—more or less the same thing that happened with the face of Che. That’s where I come in, to comment with my show about las Brujas. My interest is in speaking about Spiritualism as the basis of these religions.

In this show, the participating artists (whether spiritual practitioners or not) reference and express an authentic approach to, and respect for, the spiritual realm. I’ve invited artists from other places, too—not just Cubans.

I think that in Cuba, in general, Spiritualism is still discriminated against. People who have a vision, an intuition, are mocked. This is something I don’t understand very well, and I hope artworks like these will help change that perspective. As I said in the beginning, the idea has always been to join together, to aglutinar, which is the only way to grow together, living together.