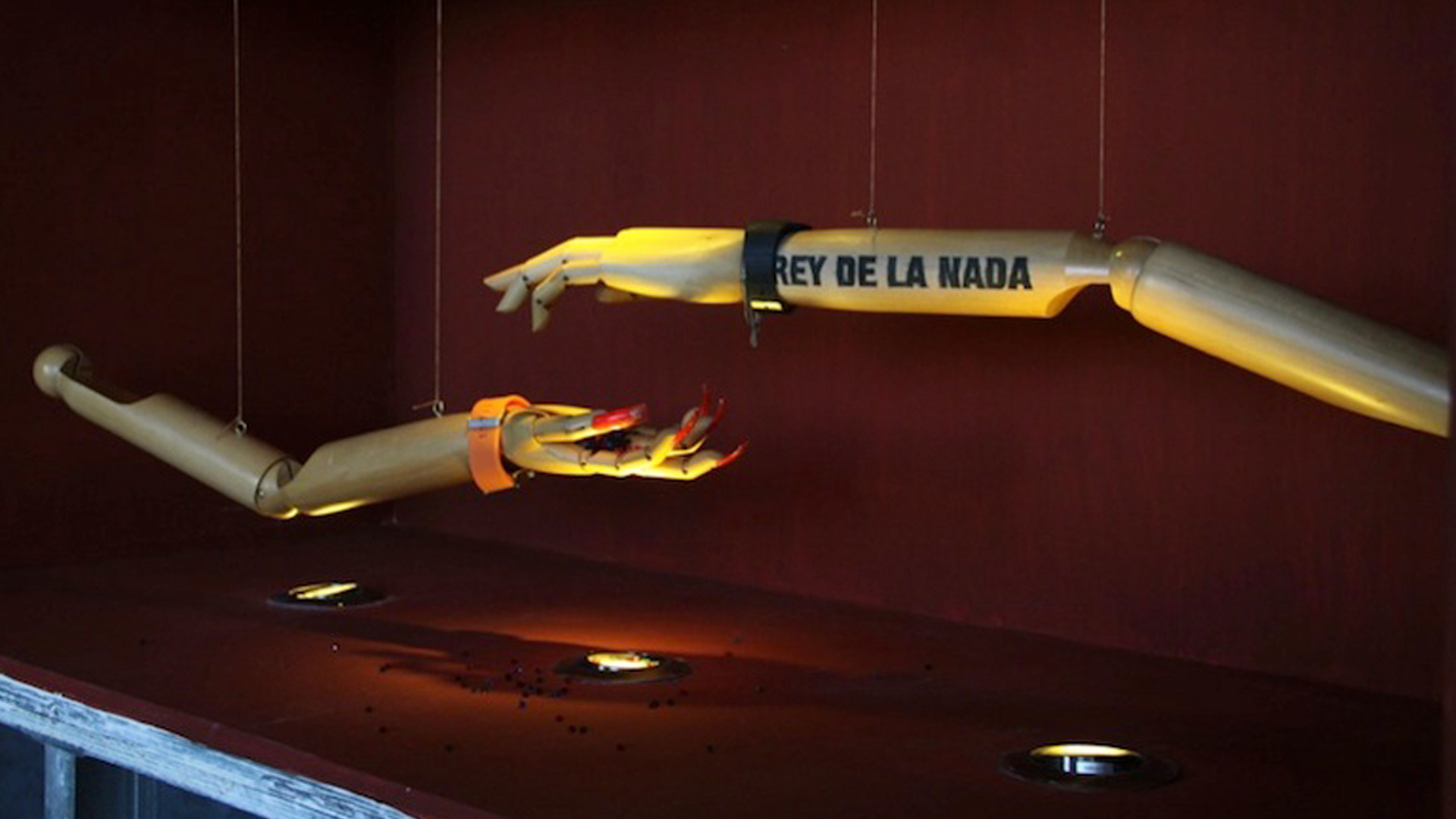 In conjunction with his 2013 Cuban National Award in the Visual Arts, Eduardo Ponjuán’s solo exhibition opened late last year at the Museo Nacional de Bellas Artes. For Ponjuán, work on the exhibition was shadowed by the death of his mother, who passed away while the show was in preparation. Here, Maeva Peraza reflects on Eduardo Ponjuán: Bésame mucho.

For more images from the show, visit the photo albums on the Cuban Art News Facebook page.

The symbols manipulated by Eduardo Ponjuán have always carried a whiff of the linguistic, through the alternation of pictorial writings and other intertexts that the artist enjoys revisiting. In this way, much of his work approaches philosophical precepts and literary references translated into art. All of his oeuvre demonstrates that duplicity between the visual and storytelling. But in his show Bésame mucho, presented at the Museo Nacional de Bellas Artes to mark his receipt of the National Award in the Visual Arts, the artist changes his usual way of establishing this relationship. This time, Ponjuán prefers to surprise, without abandoning his usual themes and motifs but changing the value of the intertexts.

Bésame Mucho is the title of a famous bolero by Consuelo Velázquez. In the show, it’s the element that connects the artist with an almost sacred past and a tenderness that many believed was extinct in his work. The exhibition is built around memory and emptiness, a communicative sphere that enables recollection and evocation.

It is necessary to mention two moments in the show, strengthened by those duplications that Ponjuán uses to surprise us, that he uses to exorcise himself from imposed traditions and to approach his work with an unfamiliar freshness. Here, we have to address the bifurcations between object and concept, between linguistic and pictorial signs, and between image and being. The distinction, so un-linear, occurs between outside and inside, between showing and not showing, a strategy of confession versus emptiness.

As with a musical composition, there’s a rhythmic change-up in the show. First, at the entrance to the exhibition hall, the visitor is presented with the installation Unmonumental. It’s arranged as two sets of niches or vitrines, in which Ponjuán visualizes dissimilar elements, laying a trail toward the silence that comes later. Small installations within the niches play on different meanings and sensibilities, displaying objects that connect the artist with moments of his own past. One might find drawings, an elf doll placed atop a mound of earth, a work in which Mickey Mouse and Wifredo Lam converge, or the pedestal for a sculpture by Loló Soldevilla, which the artist happened upon by chance. All are presented as objects of intimate significance, through which Ponjuán expresses the contents of his internal blog, bringing us into its psychology.

Among these pieces, with their performative air, are two that in their gesturality achieve a heightened effect. In one, the artist places a book about sculpture on a portrait of his grandmother, bringing into play both the conceptual burden of art and an unexpected biographical element.

In the other, wooden marionette arms are suspended to portray a relationship between beings associated with giving and receiving. One hand offers small colored beads to the other—irrelevant treasures that in this context are presented as meaningful symbols. These works not only provide a sharp visual contrast, but also culminate the narrative of the installation.

In this way Ponjuán—as if to establish a before and after in his oeuvre, and in Bésame mucho as well—brings us into the pictorial universe of the show, a world that is alien to voices, and to the elements that connect memory with the present and states of being to aesthetic cycles. Large paintings—all two meters or more—recall the works in the artist’s earlier show, El ladrón de las manos de seda (2013). But the current compositions have a common reference point: the focus of each is an object used for preserving memories through different sensory pathways.

In these canvases, postcards and pages torn from notebooks are placed in absolute emptiness, presenting a story without words, managing to communicate through the silence that the artist evokes. His reading of Eastern philosophy has made him aware that silence communicates and that words are not the only way to externalize reality. Ponjuán expresses the image in a such intimate manner that it overwhelms. On this point, in her introduction to the catalogue, exhibition curator Corina Matamoros writes:

. . . Hyper-realities are seen in these paintings: a sheet of lined paper waiting for handwriting that fails to arrive; a post-it on a white background, a black Polaroid negative, a sheet of paper torn across the center, the back of a postcard without address or message, three blank sheets of paper . . .  Here is loneliness, emptiness, clarity. Here is a painter who flees to the limits of visual representation by way of a profound purification of images. . .

While single sheets may be subject to loss and nothingness, Ponjuán approaches not only the desolation of the texts that should be occupying these pages, but also to empty photo negatives which, with no image, reveal human traces in the ringlike stain from a cup of coffee, a scene that interrupts the artist’s perpetual exit. Similarly, the piece 45 RPM shows a vinyl record sliding out of its cover, leaving the cover equally empty, submitting to the importance of “not saying” that the artist has stipulated. The image advises us only of the frequency with which the record is played, one of the few pieces of data offered to us. Paradoxically, these works articulate a dialogue with el todo, the whole, through la nada, the nothing—a stimulating conceptual move that is materialized in the visual force of the compositions.

The titles of pieces are far removed from the rhetoric used by the artist in other moments, focusing on what is clearly denoted and drawing distinctions between each work. Only two works deviate from this norm. One of them is Who cares?, a question that transports the work to the realm of adolescent rebellion, utilizing the image of the tennis shoe, or sneaker, a central motif in the exhibition.

The installation Bésame mucho, a key work in the show, takes the same leitmotif. In this case, a pair of high-top sneakers hangs from wires suggesting power lines, arranged as a series of musical staffs. Recalling the song that is its title, the work links memory with the present. It not only conveys a moment of tenderness, harmonizing the apparent disconnect between the signifier and the signified within the paintings, but brings into the present moment the remembrances that Ponjuán both reveals and, at the same time, jealously conceals.

Bésame mucho is an exhibition that revokes the apparent coldness of the works’ concept to show how tremendously vital and human the dialogue is between the artist and his creation. Again doubling and dividing, Eduardo Ponjuán plays at confounding, disorienting, and apparently changing direction. There’s nothing strange in an artist who swaps memory for silence, symbols for representation, and his own self-reference for its double.