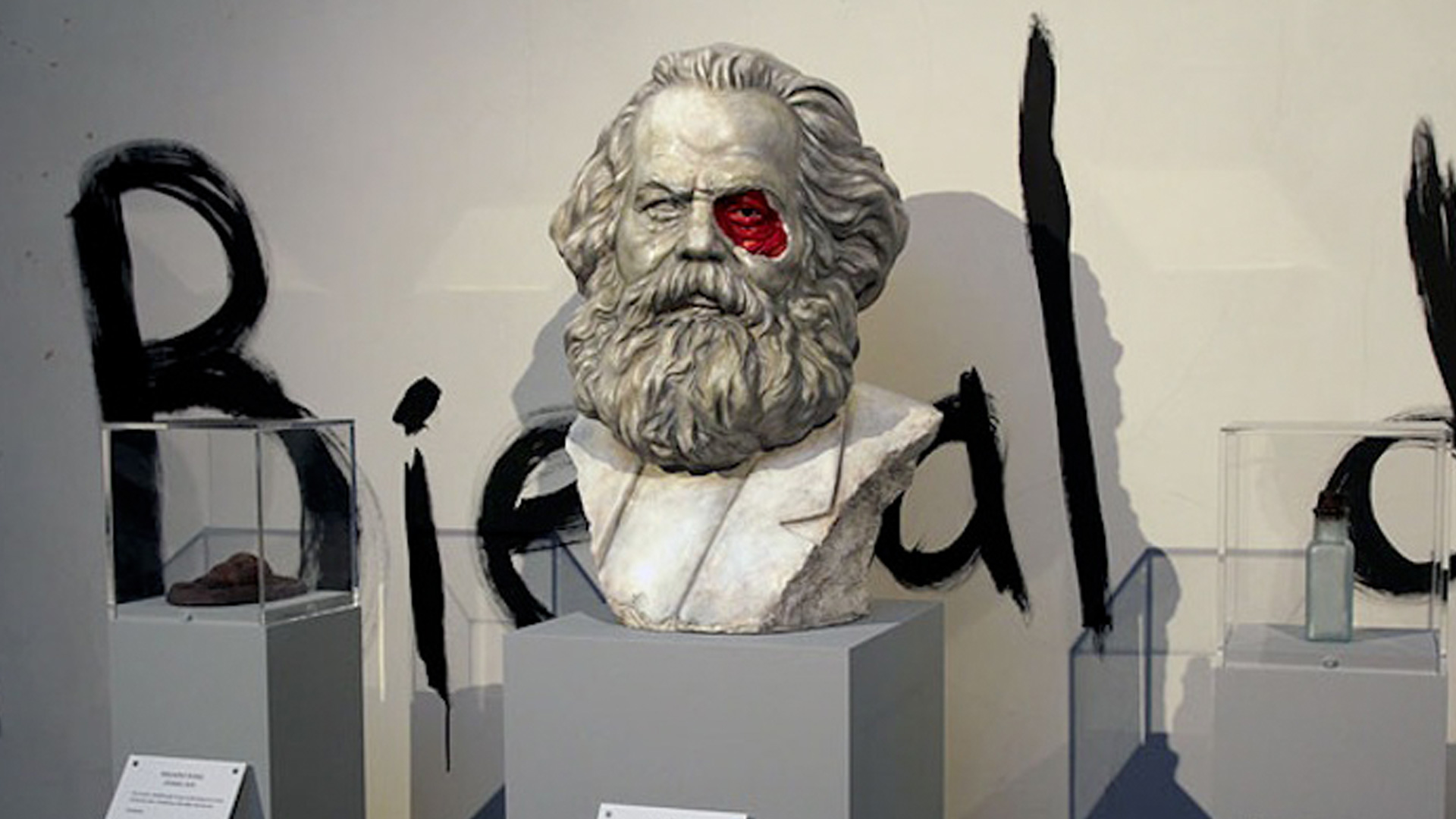 La utilidad de la Historia (The Utility of HIstory) is a provocative show of emerging and established artists, curated by Alejandro Machado and Concha Fontenla. Co-curator Alejandro Machado insists that the show does not aim to examine the impact of events and historical figures on the Cuban collective imagination or the future of the nation. But inevitably, the works in the show, on view at Factoría Habana through December 15, are clear examples of this process.

They range from a reconstruction of the circumstances surrounding the death of patriarch Ignacio Agramonte to the evocation of Fernando Ortiz’s thoughts on cubanidad. Other works feature the names of Cuban presidents during the «neo republic» and revolutionary transition period at the beginning of the 1960s, or gather iconic images of the socialist epic. The show, which opened in late September at Factoría Habana, spotlights vital processes in the formation of «historical consciousness» on the island.

That phrase comes from an article by Oscar Zanetti, recipient of the 2011 National Social Sciences Award, known for his monumental studies of the sugar industry in Cuba and his reflections on historical research. The text on «the uses and usefulness of History,» published in 2009 by La Gaceta de Cuba, forms the spine of the show, and is the most influential element in its interpretation.

The essay is cited twice on the walls of the gallery, at the beginning and end of the show. Zanetti reflects on the social function of history; he thinks that knowledge of the past has an «undeniable value» and that it is «an integral part of human life.» Co-curator Alejandro Machado found in this reflection «the focal point of the discourse of the show»—a project dedicated to demonstrating how artists at different points in their career draw on detailed research as a foundation for their art.

«Most of the pieces in the show are based on specific historical documentation or refer to some historical fact,» he says. This is precisely why the exhibition, even unwittingly, becomes a catalogue of landmarks, symbols, and stereotypes that have marked the development of the Cuban nation.

While the intent is to draw the viewer closer to History (with a capital «H»), by including such works as Diario by Frank Mujica (which refers to art history with an emphasis on its aesthetic component), La utilidad… looks mainly to the local context—and consequently, to a critical reflection on the ideas that have supported the country during different political and ideological conflicts, and changing notions of cultural identity.

In these attempts, the artists’ prevailing desire is to dismantle the concepts of the hero and heroism, which figure in most stories of the independence struggles and the Revolution after 1959. At the same time, there is an intention to reveal obscure passages of national history, and the influence of individuals who have remained in the background or on the margins of the great biographies and macrostories.

Ariana Contino brings to this exhibition the portrait series Romance, which highlights the lives and characters of women linked to José Martí, the “Apostle of Cuba.” The relationship of the Cuban patriot with his mother, sisters, wife, and the child María Mantilla were permeated by the circumstances of exile, imprisonment, death threats,  and the unconditional and fervent commitment of the maestro to the struggle for Cuban independence. With an exquisite display of papel calado, the technique of intricate paper cutting, the artist refers to one of the most controversial aspects of the martyr’s life and echoes a generation that seeks to identify with their heroes in a less grandiose way.

José Manuel Mesías uses the story of Liberation Army Major General Ignacio Agramonte’s death in combat to reference different interpretations of the same historical event. There are several versions of Agramonte’s death on May 11, 1873, which was largely prompted by a sudden change in strategy in the confrontation with Spanish forces at the Jimaguayú cattle ranch on the eastern side of the island.

One thing that invariably comes up in connection with this event is the gunshot wound to the right temple that the 32-year-old Agramonte suffered. In the show, Mesías highlights this element. He showcases in a vitrine, as in a historical museum, the hat the commander was supposedly wearing at that fateful moment—no news of which has otherwise been heard of to date. The artist distorts the facts and openly communicates his intention. He presents the hat in a museum case that has itself been pierced by a bullet. Alejandro Machado explains that this is «a work constructed on the basis of historians’ written descriptions of an episode for which there is no visual documentation. What is presented as a historical object is actually completely fabricated.»

Mesa del Consejo de Ministros, Museo de la Revolución (Table of the Council of Ministers, Museum of the Revolution), 2012, from the series Anverso by Rigoberto Díaz, is part of a group of works in this exhibition that delve into the lesser-known traces of the country’s history. This work reproduces on a large scale the underside of the table that belonged to the Cuban Council of Ministers between 1920 and 1965.

The artist photographed several images taken from beneath this object, which is displayed in the former Presidential Palace, and combined them in a collage. So the table—a silent witness to Cuban history—is not presented in its authentic aspect, but is intentionally modified. By appending to the piece a list of presidents who governed in the period 1920 to 1965, Díaz points out one of the great paradoxes of history: the first presidents of the republic after 1959 governed around the same table, the same symbol of power, as their opponent Fulgencio Batista and other corrupt leaders.

The use of historical documents as primary or partial source material for the art is a distinguishing characteristic of the show. 699.6 kg (gross weight), also by Rigoberto Díaz, clearly illustrates this strategy of documentary appropriation and modification, used by a group of artists of the current generation. This work was conceived as an intervention in the archives of the journal Revolución y Cultura; the artist is concerned about the obsolescence of traditional mechanisms and institutions that work with information and knowledge.

The three large photographs showing the shelves of the journal’s storeroom are marked with ink to indicate the weight of the materials being stored there. In his statement, the artist explains that «getting the body mass of a space» suggests «seeing the information as the weight of an idea or thought»; he creates an image containing both the visual and symbolic weight. This work in libraries and storerooms, measuring levels of moisture, dust, mass, length and volume of objects and spaces, trying to reflect on the processes of cultural production and construction of knowledge, spans almost the entire production of this young artist.

Díaz’ work is related to the piece in the exhibition by Ricardo G. Elías. Elías’ work, La historia me absolverá (History Will Absolve Me), displays in braille a fragment of the famous speech of the same title, delivered by Fidel Castro after the assault on the Moncada Barracks in 1953. The Cuban leader’s defense plea is considered the first programmatic document of the Revolution. It is «translated» for this work, calling attention to the promises of social inclusion advocated by the group that took power in 1959. In La utilidad de la historia, this piece (which has been shown previously in other spaces) is presented along with the material that inspired it: a voluminous edition of the speech, which allows for new interpretations of the work.

According to Lázaro Saavedra, the bust of Marx in his installation was made by the sculptor Gabriel Cisneros in 2013, based on an idea and image created by Saavedra in 1987 for his installation “Solidifying what melts into the air,” which was presented in the Cuban pavilion of the 2013 Venice Biennale. The piece consists of the combination of the sculpture and a photograph taken with a camera from the computer monitor and printed on paper. Beneath, a fragment of 18 Brumaire of Louis Bonaparte dialogues directly with the theme of the exhibition: “Men make their own history, but they do not make it of their free will.”

By including several generations of artists, such as José Angel Toirac and Abel Barroso, the exhibition’s organizers highlight another aspect of these «looks to the past» that characterize the new generation of visual artists. Machado highlights «the importance, for this group of young artists, of learning from their more immediate predecessors, specifically those from the generations of the 1980s and ‘90s in Cuba, who have left an undeniable mark on the recent history of Cuban art.»

But La utilidad de la historia reflects a too-early recycling in some of these young artists’ production. That’s the case of Alex Hernández, who recently showed Testigos at the Galiano Gallery under the title Patrones. This typical set of portraits of American advertising faces of the 1950s is presented with an educational video made at that  time for U.S. students. It’s interesting and even comical, being fraught with stereotypes about the reality of Cuba.

Some of these pieces have been exhibited in group shows like Tócate (Galería Habana, 2012), one of the earlier scenarios in which the interest of emerging artists in historical inquiry was evident. In that show, as well as in the one now at Factoría Habana, the common denominator is the compulsion to reveal, through artistic methods, the intimate detail, the unusual fact, or the most problematic angle of history as it’s been published.

The exhibition at Factoría Habana has been extended through December 15.