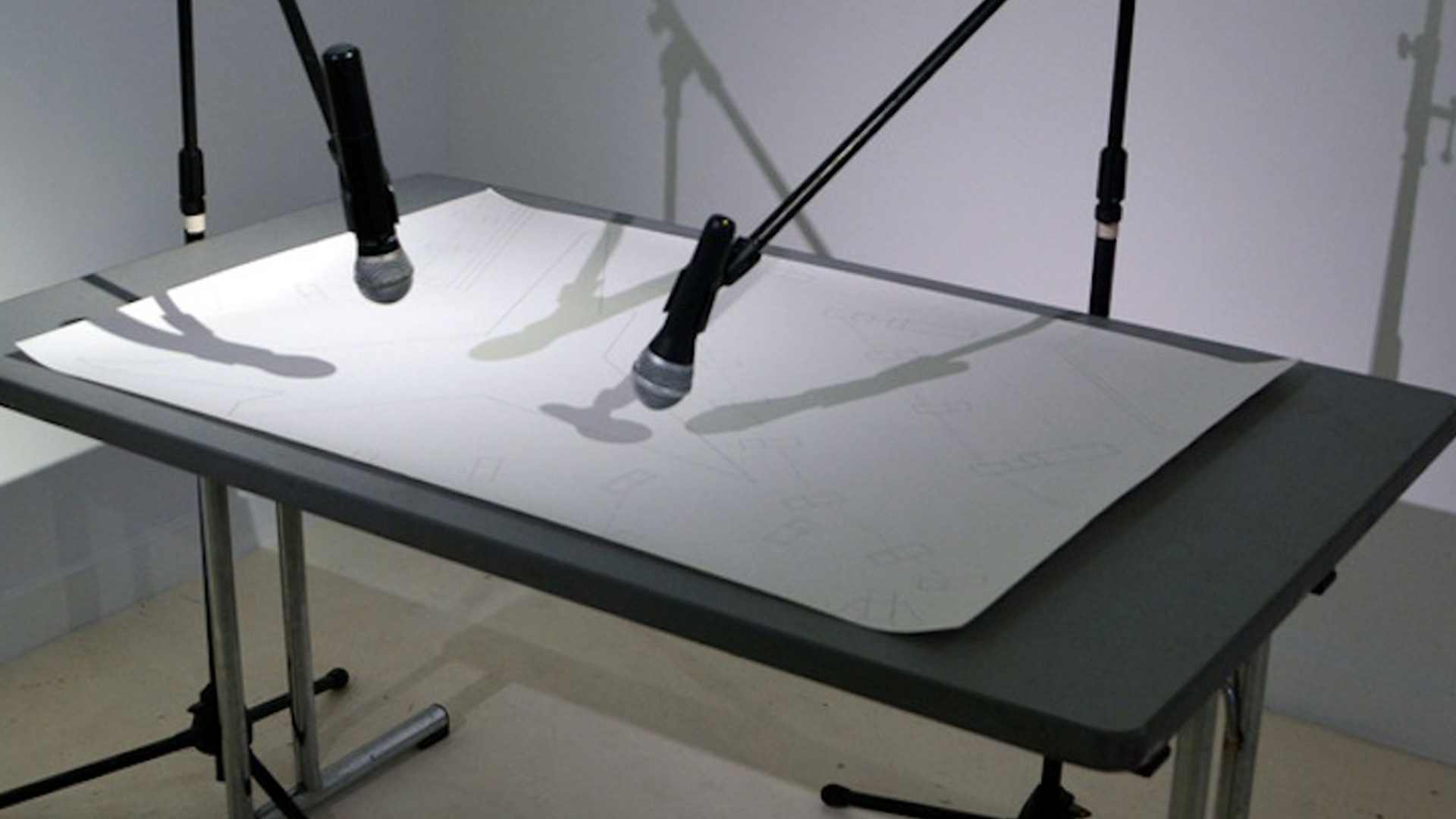 The art world’s summer slowdown hasn’t affected media coverage of Cuban art and artists. In this round-up: Coco Fusco, Teresita Fernández, The Miami Generation, Beyond the Supersquare, and more.

From “Even Utopian Citizens Like to Leave the House,” review of Beyond the Supersquare at the Bronx Museum of the Arts, by Holland Cotter, New York Times July 25:

And there’s work that doesn’t just comment on architecture but also does something to it, alters it. Through collage and watercolor, Maria Martinez-Cañas and Rafael Domenech transform found photographs of World War II military bunkers into porous, decorative structures. . . .

There are different ways of questioning modernism. You can attack outright or you can tease it, as Felipe Dulzaides does in the installation “Interrogating Architecture,” which consists of a drafting table, a floor-plan drawing of the National School of Dance in Havana and two microphones. The school’s building was started in the 1960s but never finished, and Mr. Dulzaides has a problem with that. The two mikes seem to be asking the drawing to explain itself: “Why the delay?”

Another Cuban, Carlos Garaicoa, an architect by training, maps out the history of his home city (also Havana), now decrepit, and fantasizes future changes (a pier that runs from the harbor to Key West) in a charming pop-up book.

From “At 99, Carmen Herrera is a Still-Rising Star,” by Julie Baumgardner, Art & Auction / Blouin ArtInfo, May 31:

“I never saw a straight line I didn’t like,” says Herrera, sitting in a self-imposed wheelchair in her New York home and studio beside two recently completed six-foot paintings with symmetrical sky-blue and white shapes. “I am very happy, but I would like to paint bigger,” she says. She is contemplating making the work a triptych or even tetraptych. She forged her style in the 1930s—well before American Minimalism and outside Brazilian Constructivism, the movement championed by Lygia Clark and Mira Schendel that is currently being reexamined in gallery and museum exhibitions. “I have pictorial ideas,” Herrera explains. “There is a clarity and simplicity to geometry.” When one examines Tondo: Black and White, 1952, a composition of intersecting demilunes, or Blanco y Verde, 1959, a slip of a green triangle on a white field that was recently purchased by the Whitney Museum of American Art, the conviction of her painting is clear.

The Miami Generation: Nine Cuban-American Artists [the 1983 exhibition that inspired the current show] has an indisputable historic value of having glimpsed early traits of a new generation of artists who, although they didn´t function as a group, they have many things in common (as they left Cuba as children, received artistic training outside the country, received second-hand references to the mother culture, they were also wholly bicultural individuals, among others). Thus, the curatorial thesis that supports the original sample is not confined only to the nine artists included in the exhibition but extends to many others, including, to name just a few, Ana Mendieta, Felix Gonzalez-Torres, Luis Cruz Azaceta.

We hope such projects continue at the local level. To recover the legacy of Giulio V. Blanc would be vital; as well as restoring Making Purple, the excellent piece by Fernando García in the Okeechobee Metrorail station which, like no other, portrays our city, yet it´s in deplorable condition; rescuing the work of other groups, such as NADA, whose irreverent actions marked a milestone in the cultural history of our city.

“In 1985, just after I finished graduate school, I met a group of Cuban artists who visited the US and exhibited their work here: José Bedia, Ricardo Brey, and Flavio Garciandia. They were friends of Ana Mendieta’s. I felt a real affinity with them: We were about the same age, we were interested in the same art and the same ideas, and we had read many of the same books. Temperamentally I felt really close to them and I wanted to see more and learn more so I started travelling to Cuba. This began a long relationship that I’ve had with the Cuban visual art scene. The vitality of the place, the energy in the art scene, even the intense politicization of every aspect of life is fascinating to me. Over time, I grew to understand the complexities of negotiating life there as an intellectual or artist and developed a somewhat more skeptical view of life in the land of tropical socialism.”

Elizabeth Cerejido: There are many instances when I travel to Cuba that I do not go visit my family. And I do that purposefully because they don’t understand this idea that perhaps, you know, Elizabeth wants to engage with Cuba and with Cubans on a very different level outside of that exile Cuba narrative. I think we’ve had 50 years of that and that conversation needs to change.

And from the MASS MoCA website, a short interview with Teresita Fernández on As Above So Below, her exhibition currently on view at the museum. Keep an ear out for her thoughts on Gaston Bachelard’s “intimate immensity,” among other topics.