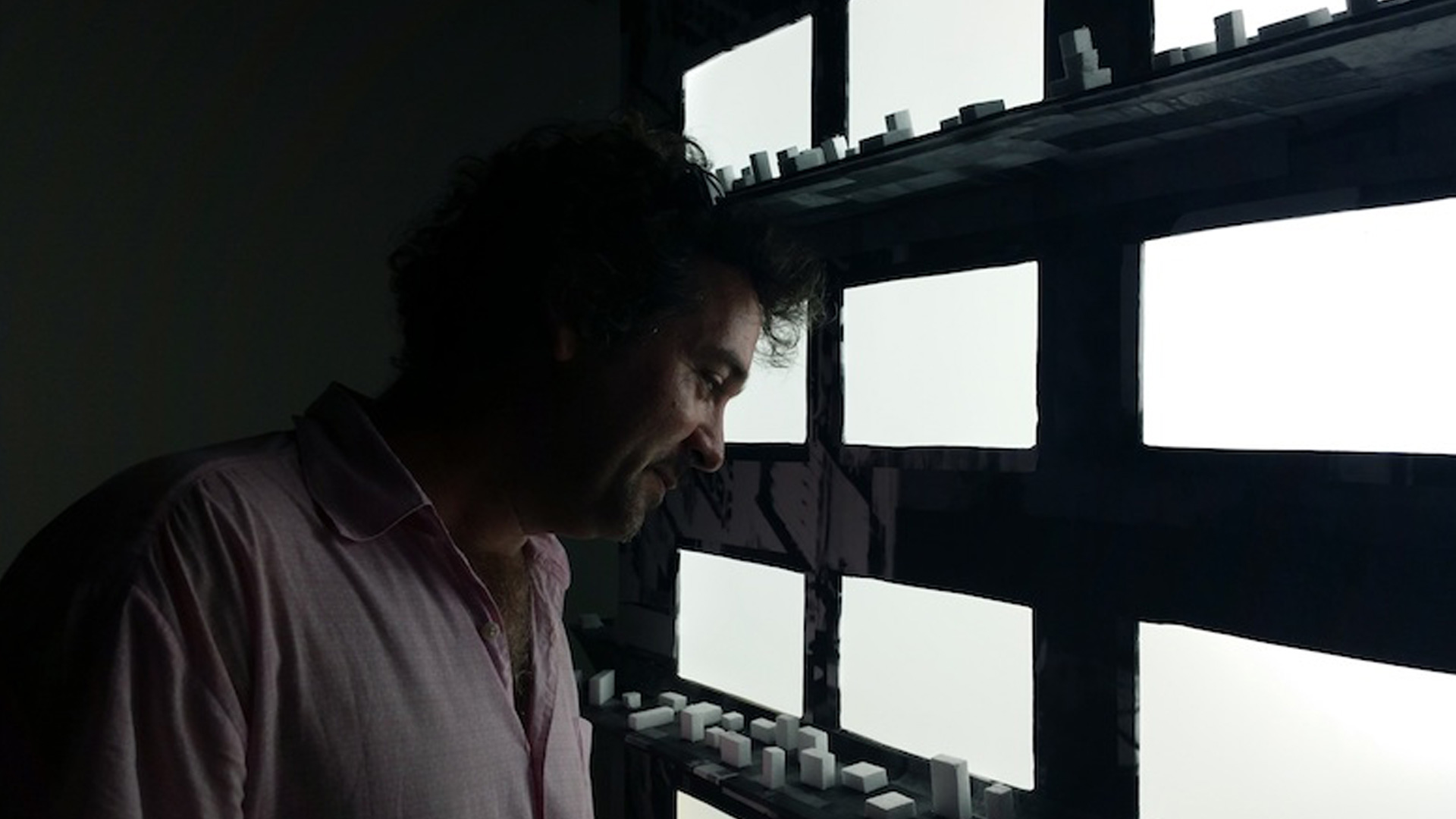 It’s summer. The sun sets over Miami, over Havana. Or should I say, over San Agustín?

I prepare to cross the threshold of Dimensions Variable—an experimental space in Miami managed by local artists Adler Guerrier, Leyden Rodriguez-Casanova and Frances Trombly—when suddenly, that unmistakable and whiny sound of an old modem, followed by a dial tone, calls my attention.

Inside, a strange, vertical architectural structure, riddled with glowing openings, halfway between a skyscraper and something built by a Cuban micro-brigade, seems the idol of a strange cult.

People surround the structure and approach the luminous totem. At times, they delicately place their hands on the upright talisman as they were sending it their . . . prayers? while their gazes, fixed as if in ecstasy, are captivated by what now—contemplation transfigured—glows like a communications tower or phone booth.

It´s called Equipajes Personales (Personal Luggage), an installation conceived and realized by the Cuban artist Candelario—a proud resident of Havana’s San Agustin district. Curated by Elisabeth Cerejido and presented in collaboration with the Fountainhead Residency, Equipajes Personales is a kind of happening that Cerejido qualifies as a «socially committed exhibition.»

«For this specific project,” she explains, «Candelario wanted to connect Miami and San Agustín. He wanted people from San Agustín now living in Miami, who still have connections there—family, friends, etc.—to be able to be together with them. That’s the principal “bridge” underpinning the project. »

«And what’s great about this piece is that it turned out to be not only an architectural structure. I always wanted to have an architectural element that refers to the idea of urbanism and how people interact with their urban environment, and San Agustin is a hybrid and weird place. Trying to activate this structure, we came up with the idea that people could make direct calls to San Agustín on opening night. But how to do this?

“Well, we tried several options for electronic equipment, until finally, through a friend—a sound engineer—we found an old bluetooth device, one of the first ones that people used in their cars. The bluetooth connects to a radio station, and in this way we get a signal and through Candelario´s phone—which is connected to the bluetooth—we make the calls to Cuba. You need to be very close to the tower—you need to talk to the tower, because the bluetooth is inside the tower. And suddenly, people start to talk to this thing. They ask, «How are you?» And then the tower responds. You’re talking to the tower, which is a representation of San Agustin and in a broader sense a representation of Cuba. It was very emotional, and the audience soon joined in activating the piece. »

On the small shelves projecting from the tower, you can see whimsical geometric structures that may well refer to the somewhat anarchic urbanism of San Agustín.

«At a conference on urban planning in Havana,” Candelario tells me, speaking passionately about this topic, “each architect explained the project of the Havana-area district or town in question. The architect from Cojimar spoke, and the architect from Alamar. When it was the San Agustin architect´s turn, he did not speak. He picked up a box of dominoes and whipped it around. The dominos scattered on a map placed on the floor. He said, ‘Here is San Agustín.’ And it is. When San Agustín was created, for example, there were no sidewalks. Time and impromptu shortcuts made the pathways and then, following these shortcuts, sidewalks were laid.»

The curious thing, according to the artist, is how the use of this so-called spontaneous urbanization resulted in a much more functional urban space than others planned down to the last detail. The residents’ everyday habits made their needs and preferences clear.

If I linger on this anecdote, it’s because its lesson is closely related to the philosophy behind Candelario’s work and that of his Laboratorio Artistico de San Agustín (LASA). Created in 2008, LASA is an artistic and business project based in San Agustín, on the outskirts of Havana. Founded by Candelario and co-directed by himself and Aurélie Sampeur, LASA was born as a multidisciplinary art project, open and adaptable to its surroundings. LASA is interested in creating community projects through art, using it as a platform for experimental and neighborhood enrichment through artistic and cultural exchange.

Indeed, it is this sense of integration between art and the community that captivated the curator of the exhibition that came to Dimensions Variable.

«As you know,” Cerejido points out, «Candelario´s work is always related to the idea of exchange. It’s precisely this idea of how we communicate with each other, how we move beyond the barriers, that initially caught my attention. For me, bringing Candelario to Miami was very interesting; I have always put a lot of emphasis on bringing artists from here to Cuba, helping them learn about Cuba. Having Candelario here was a way of facilitating his understanding of Miami.»

While Candelario was presenting Equipajes Personales in Miami (it just closed this weekend), he was also presenting one of LASA’s most recent projects: MAC / SAN TV, at the Center for the Development of Visual Arts (CDAV) in Havana. The MAC / SAN acronym stands for the San Agustin Museum of Contemporary Art, an institution created by LASA. By its nature—since MAC/SAN values experiences over artifacts—it exists without the need for the kind of space typical of other museums.

«We launched the first Museum of Contemporary Art in Cuba, as a project,” Candelario explains. “The main idea is that the 21st-century contemporary art museum should be made up of moments, not spaces. The museums of the 20th century were always spaces: empty spaces that were constantly generating events to get people to come. From that theoretical starting point, we began working. Cuba has to have a museum of contemporary art—first, because it doesn´t have one, and second, because it has to be this way. And as I live in San Agustin and everyone coming to work at LASA will be doing that work in San Agustin, then it will be MAC / SAN.»

As part of the central program of the 11th Havana Biennial in 2012, one of the first projects MAC / SAN created is MAC / SAN TV. It’s a nomadic TV studio that features everyday people and artists as the protagonists, and as its distribution channel relies on the widely used USB memory stick.

«MAC / SAN TV works like this. We go to the artist´s house and film all his problems. His girlfriend, his every day life: the idea is not to sit with him to talk about his work but to see his life. They are human beings, not artists. Each set has a two-and-a-half-hour running time. It includes a visual dossier of the artist´s work, an interview, a documentary, and a weather report of what will happen in the artist’s home. It´s called sitiorology (placeology) instead of meteorology. It has video clips, but we call them des-clips, because we do them backwards: I make a video and give it to the musician to make the music for it. Normally, you have the music first and then create the image.

«Those two-and-a-half hours of programming (about a 2-gig file) becomes a virus. I put in a new USB that has 4, 6, or 8 gigs. And I give it to everyone. I’m giving them 2, 4, or 6 clean gigs for their personal use, but there are 2 gigs that cannot be deleted. Each time you connect the USB to a computer, this information gets into the computer. And every time a memory stick is inserted, it’s contaminated with the virus. You can delete it from this second memory stick, but never from the original USB. This is to ensure that you and I have a relationship, and that relating to art has consequences. And the first one is that it is with you all the time. You cannot get rid of it.»

Below, a short video clip from the exhibition opening shows artist Glexis Novoa using the tower to speak with a friend in San Agustín.