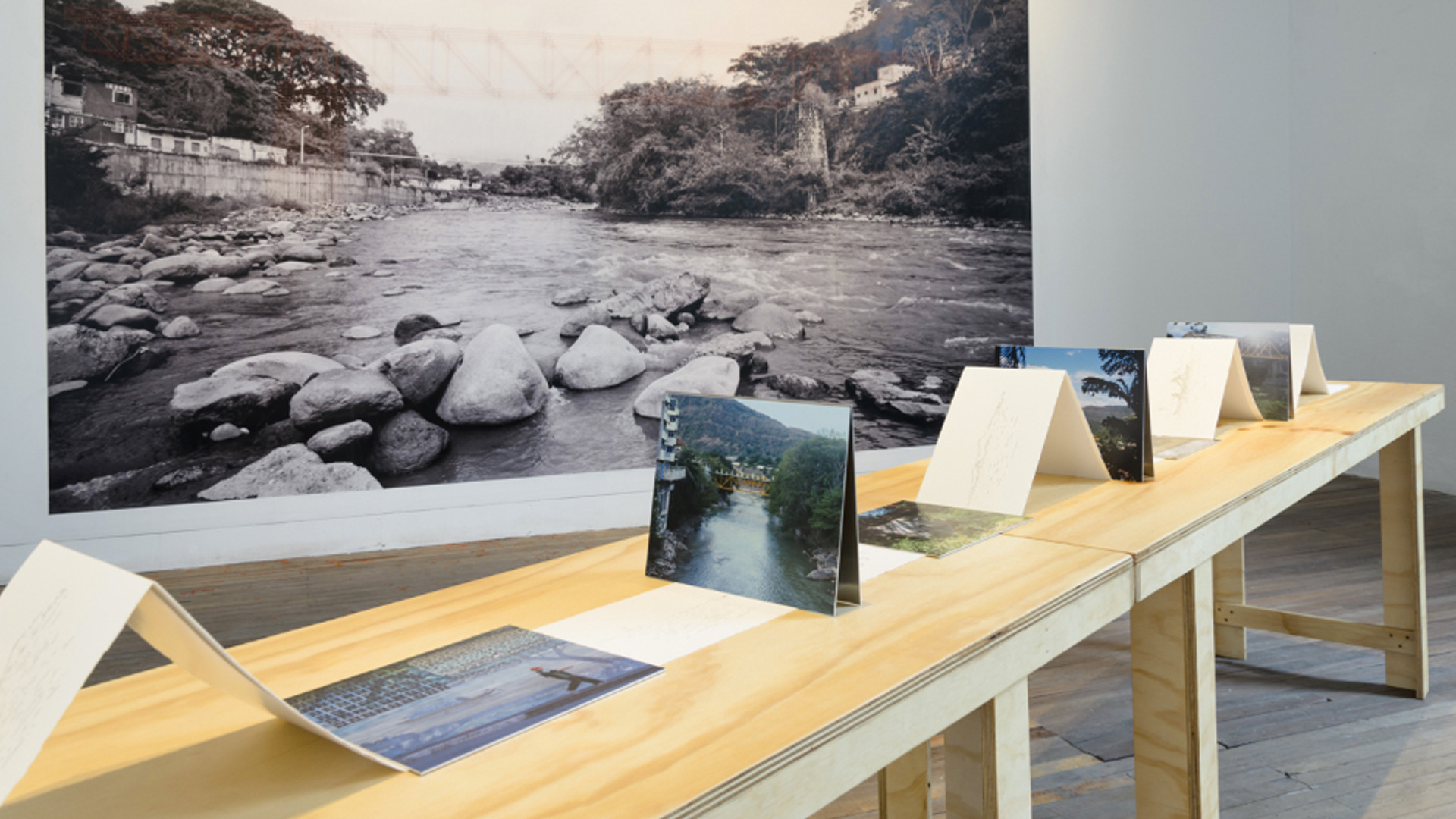 Teresita Fernández: As Above So Below at MASS MoCA. The artist’s long-awaited solo show takes full advantage of MASS MoCA’s expansive exhibition spaces. Installed in a triple-height gallery, the work Black Sun, 2014, made of thousands of translucent tubes, is both cloudlike and topographical. Sfumato (Epic) is a site-specific installation composed of more than 40,000 chunks of graphite, ranged over the walls of the museum’s central galleries. A third installation, Lunar (Theatre), 2014, consists of thousands of glass beads arranged on a gold surface. Also on view: works from the recent series Golden: India ink drawings made on gold-chromed panels. For a slide show of the exhibition being installed, courtesy of the Berkshire Eagle, click here.

Carlos Garaicoa x 2 in Bogotá. Garaicoa recently completed an artist residency in the city of Honda, under the auspices of the Colombian arts organization FLORA Ars+Natura. Now, the art that came from that experience is on view at the FLORA Ars+Natura gallery in Bogotá. Diferentes Maneras de cruzar un río (Different Ways to Cross a River) presents a portfolio of engravings and photographs inspired by the bridges of Honda, its past golden age as a center for mining and trade, and the Magdalena River that runs through it. On view through August 3.

At NC-arte in Bogotá, Garaicoa takes the “failed architecture” of Bogota, Havana, and Donetsk, Ukraine as the springboard for an inquiry into the conditions—political, economic, social—that cause buildings to fall into ruin almost from the start? Presenting a mix of photographs, drawings, and architectural maquettes, Línea rota de horizonte (Broken Horizon Line) runs through July 19.

Group shows in Havana and Miami…

The program included the screening of coincided with the opening of Circulo de polvo (Circle of Dust), Nestor Siré’s documentary about the art intervention that Gabriel Orozco made with students at ISA during the 2012 Bienal, in the ruins of the Ballet School on the ISA campus.

And at Factoría Habana. Factoría Habana is also saluting the Bienal with Miradas, a group show curated by the gallery’s director, Concha Fontenla. Artists on view span the three decades in question, ranging from early pioneers to young and emerging—among them Belkis Ayón, Tonel, Sandra Ramos, Lidzie Alvisa, and Felipe Dulzaides. “The 17 Cuban artists form a mosaic,” writes Fontenla, “that is simultaneously a product and a reflection of the evolution of both the island’s society and its art over recent decades.” Miradas is on view through August 23.

Equipajes Personales in Miami. The Cuban artist Candelario is co-founder and director of the Laboratorio Artistico San Agustín, a community-based, socially engaged arts organization in Havana. Now, he’s bringing his experimental, public-arts approach to Dimensions Variable, an artist-run exhibition space in Miami. Curated by Elizabeth Cerejido, Equipajes Personales (Personal Luggage) is an installation that will evolve over time, as Candelario interviews Cubans in Miami with a connection to San Agustín. The project also includes a series of talks, encounters, and panel discussions emphasizing the process-oriented character of Candelario’s art. Equipajes Personales continues through June 22.

…And three photography shows in Miami and New York City.

Public Art in Miami. At Cernuda Arte, a lecture on «Cuban Art in Miami Public Spaces» looks at more than 100 sculptures, monuments, murals, and art installations by Cuban artists.Presented by Jorge A. Hernández, the talk will survey works by such artists as Agustín Cárdenas, Cundo Bermúdez, Enrique Martínez Celaya, José Bedia, and Manuel Mendive. Next Wednesday evening, June 4, at 7 p.m.

Cuba in Italy. During the month of May, the Cuban Ministry of Tourism and the Cuban Embassy in Italy will present a week of free cultural events in each of three Italian cities—Milan, Turin, Rome—to introduce authentic Cuban culture and traditions. Offerings include movies, photo exhibits, dance classes, music performances. For more information, click here.

MalPaso in New York. Founded just last year, MalPaso Dance Company is an independent contemporary dance troupe based in Havana. Tonight, they open a week-long engagement at the Joyce Theater in New York City. On the program: the premiere of 24 Hours and a Dog, choreographed by the company’s artistic director, Osnel Delgado, with music by Arturo O’Farrill performed by his Afro Latin Jazz Ensemble. The troupe will also perform Why You Follow, choreographed for them by Brooklyn-based dancer and choreographer Ronald K. Brown. There will be a “Dance Chat” following the performance tomorrow night, May 28, and the company will teach a master class on Thursday morning, May 29.

The Cuban Museum/Museo Cubano will present Cuba: Punto X, written and directed by Iván Acosta, who also authored The Super / El Super. The play will take place May 29 and 30 in the Black Box Theater of the Miami Dade County Auditorium.

And in New York, OLLANTAY Center for the Arts is offering a reading of La ventana de los Chévere(The Window of the Chévere), a tragicomedy with musical accents, written and directed by Iván Acosta, at 6:00pm at Baruch College. Admission is free.

For more information on these events, contact in Miami: artefactusteatro@gmail.com and in New York: ollantaypm@aol.com.

Save the Date. Mark your calendar for the opening of The Miami Generation Revisited, a 30th-anniversary look at the groundbreaking exhibition of Miami-trained Cuban artists such as María Brito, Pablo Cano, César Trasobares, and Juan González. July 11 at the Museum of Art Fort Lauderdale.