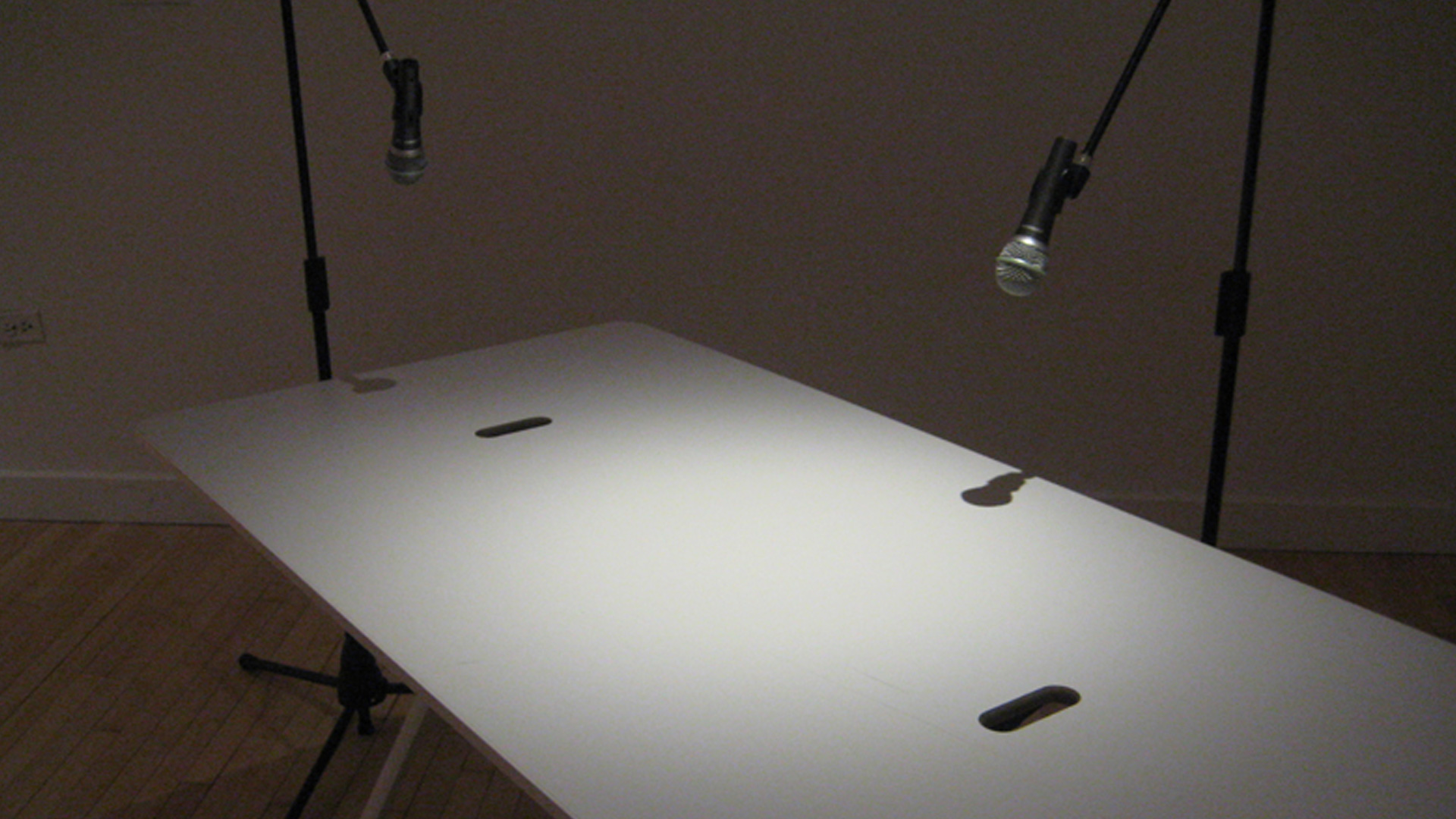 We pick up our tour of Cuban art and artists in Beyond the Supersquare at the Bronx Museum of the Arts with the exhibition’s co-curators, María Inés Rodríguez and Holly Block, in the exhibition’s final gallery.

At the entrance, up a short flight of steps, visitors are greeted with Diango Hernández’s 2011 installation If a letter in a Wall, if a Cut. As Block explained, the work references similar cuts made by artist Gordon Matta-Clark in abandoned buildings around New York City in the 1970s.

“Take a note of these beautiful drawings,” she said. “Diango’s work is very much about drawing, installation, sculpture—using architecture in a strong way, and also referencing modernism as well.”

Los Carpinteros’ Embajada Rusa (Russian Embassy) was made in 2003, when Alexandre Arrechea was still part of the group. (It has continued as the duo of Marco Castillo and Dagoberto Rodríguez.) The wooden sculpture represents the Soviet Embassy, a well-known Havana landmark. Los Carpinteros “were the first artists to reclaim artisan handcraft,” explained Block, because under the Revolution the focus was more on large-scale social endeavors like literacy, engineering, and education.

The museum’s written description calls attention to the work’s “menacing anthropomorphic form” and the “sweeping surveillance practices borrowed from Moscow during three decades of intimate Cuban-Soviet relations over the latter half of the 20th century.” For Block, the sculpture’s sociopolitical implications cannot be separated from its artisanal quality. “It’s all mahogany, hand-planed,” she said. “I think it’s an amazing piece because it’s all done by them.”

Visible behind Embajada Rusa in this photo is Felipe Dulzaides’ Interrogating Architecture, 2012.

Interrogating Architecture is part of a larger series, Utopia Posible, which was inspired by the design and unfinished architecture of the National Art Schools, now known as ISA. In its current presentation, Interrogating Architecture still awaits its final element: the floor plan of architect Ricardo Porro’s unfinished School of Dance, which, Rodríguez said, has encountered delays in its journey from Cuba. When it arrives, it will be placed in the spotlight on the drawing table.

The exhibition’s co-curators, María Inés Rodríguez and Holly Block, the museum’s executive director, on the tour.

Carlos Garaicoa’s artist pop-up book Monumentos, 2011, was acquired by the museum for its collection in 2012, and is on view in the show along with a second pop-up book, Minneapolis (Mills), 2005. Monumentos “in particular combines his own artwork,” said Block. “He grew up in Old Havana, and was really interested in documenting the changes there, and the decay, and what was going to happen in the future.”

The book, says Block, is “all about realizing future dreams.” She pointed out an image of Havana’s seaside promenade, the Malecón, with “a pier that would run from Havana right to Key West.”

Beyond the Supersquare remains on view at the Bronx Museum of the Arts through January 11, 2015. A full program of events and presentations is planned for the summer and throughout the run. Check the museum website for details.