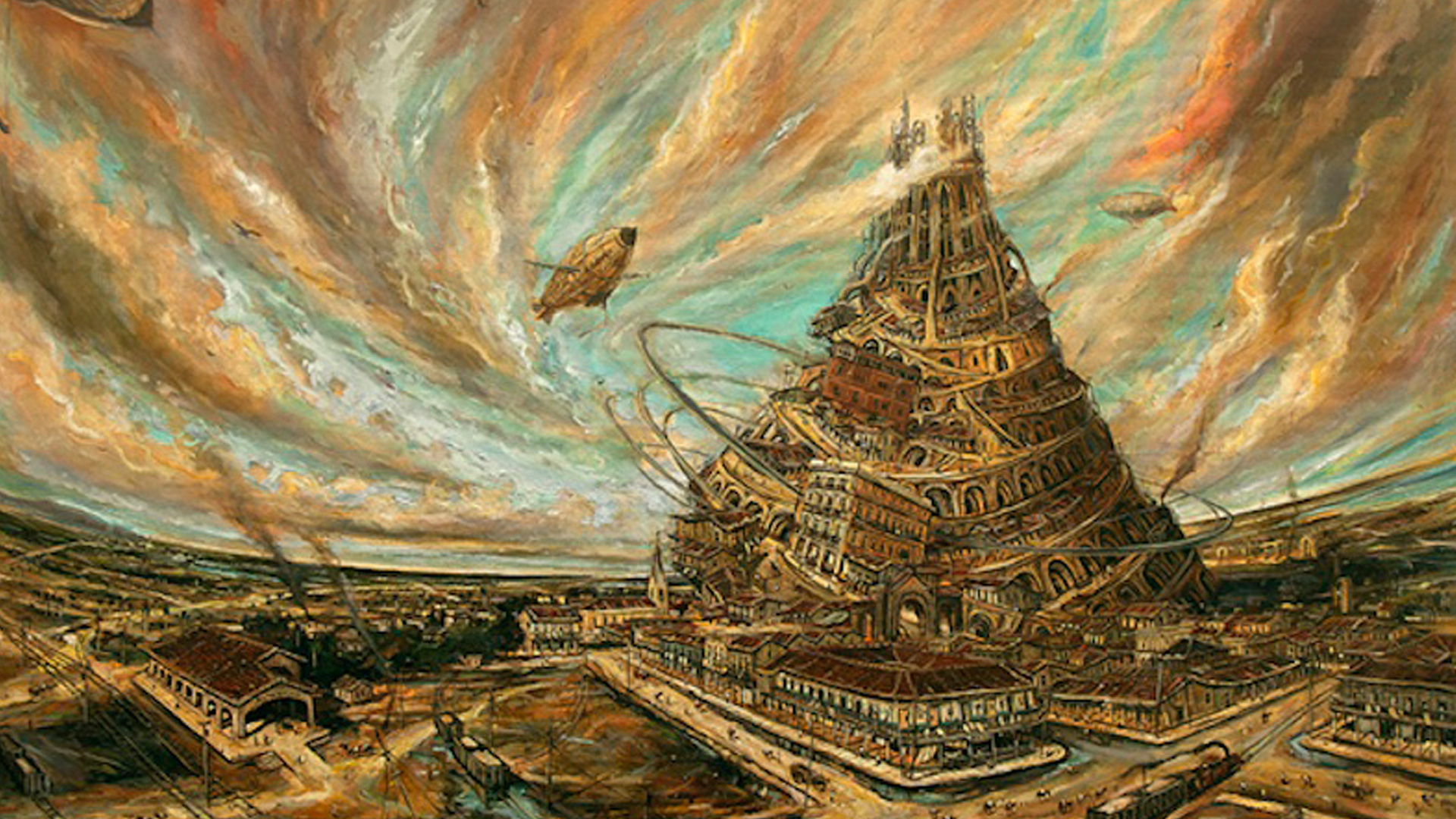 Cuban artist Vicente Hernández radiates the halo of his fantasy world. While selecting five works for inclusion in the four-artist group show Cuba: Art of the Fantastic, which closes tomorrow at LaCa Projects in Charlotte, North Carolina, the artists talked with Cuban Art News about the realities and mysteries that inspire his work.

Engravers’ chisels, cotton-rag paper, and a 19th-century German press decorate the Cuban artist Vicente Hernández´s environment. With agate tips he experiments, experiences, and looks to shape a suite of ten prints for an exhibition. He is interested in cutting through hard metals to realize his polychromatic pieces. Fascinated by color, he searches for the perfect blue. He embraces the challenge of etching, but does not forsake his “undeniable commitment to painting.»

«My work,”  Hernández says, “attempts to approach the less tangible plane of human life. It incorporates absurd and illogical elements. It highlights an intrinsic relationship with the real—wonderful or magical realism, already defined in literature by writers such as Alejo Carpentier and Gabriel García Márquez.” His canvases evoke and suggest surreal, religious, expressionistic stories that are born and live mainly in the Caribbean.

“That vision cannot be moved or extracted from a country like Cuba,” he explains, “as it reflects a profoundly inventive and mystical thought. Obviously that makes us different, special… We talk about the whole spectrum of mixed races, diversities. Cubanidad hosts this plurality.»

The artist´s attraction to the fantastic could have been awakened one night in his childhood when tremendous winds whipped his wooden home in the town of Batabanó. By lantern light, the adults entertained one another by telling the most horrible stories, unintentionally enriching the young painter´s daydreams.

«I wrote down those stories in my journal,» Vicente says. Since then, he has perhaps reinvented the landscape of this village,  located south of Havana close to the sea, based on memories, imaginings, and spaces both physical and mental.

“Where I lived,” he adds, “there was also a good library. Books troubled and transported me. … When lights went out and storms lashed my town, my mind was filled with sweeping stories. We are the result of a culture, of a previous experience, from which we visualize what can happen, and sometimes we succeed. We assume the past to create a new concept. The loss of memories is an expression of mental underdevelopment.»

«I try to express a relationship to that point of departure, which gave us our origins and marks our personalities, our criteria, aesthetics … I’ll never surrender power to cyclones, to the halos of the winds that have embraced my village, the little hick town that, agitated by the penetrations of the water, has lost the limitations of the sea.”

Conceptually, what influence does the Bible have on your work?

The Bible is a great book for more than half of humanity, because even the Muslim world has this book as an element of faith. It is incredibly well known and read; all of the events narrated within it are extraordinary. When you become a regular reader and study it, you discover the symbolism and the threads of continuity from beginning to end. Here you have the Tower of Babel, the challenge of man to God; Noah’s ark; the creation of the world…

When talking about a biblical theme, either in literature or painting, or film, you’re touching a very sensitive, core aspect of the way the world sees God, and how God walks alongside man through the Bible.

Biblical iconography confirms an inherited thought, and supports ways to express what is known about these universal events. We receive this cultural heritage. We have received knowledge through oral tradition, and have twisted it in our own way, in a more tropical space.

We have our own ways to demystify, to impose a sense of humor, and I do not think it is a joke. People can approach my work, and a place like Batabanó, through Bible stories they know.

Beyond painting, what has been your relationship with the church?

There was a time in Cuba in which religion was a personal process that happened within the family but was not shared socially. I was not trained as a Catholic, and neither was my family. My vision of faith came after an opening that existed on the island during the 1990s, in the late 20th century. I have been a Baptist since.

Not many believers went church; it seemed as if almost no one accepted religion. After those years, people made up his minds and began to bring what they had inside their homes out into the world. It’s something that occurred in the Cuban phenomenon; people started to show their true feelings. Cuba is a country that maintains clear links with spirituality. We had planned a nation under standards that did not correspond to Cubans’ actual psychology.

An interesting phenomenon has occurred in Batabanó. In the face of impending hurricanes, people have used churches as spiritual and physical shelters. There is a return to a place that at times becomes a small island.

Your pieces depict tornadoes, spirals… Do these twists and turns hide mysteries?

I can’t recognize straight lines in my work. Most of the elements (a big tower, the Roman Coliseum, etc.) appear in a counterclockwise design. I spontaneously follow the direction of hurricanes. The circle predominates—constant convergence, going to the point of origin, circling the seed.

It gives me pleasure to please people. Some say I’m a hedonist painter, but it is not a question of the market. Before thinking about selling a painting my intention is always to make the work captivating. I´ve wanted to share my reality, to create a bond with the viewer, and project work toward a positive experience, toward hope and freedom.

Your relationship with the Cernuda Arte gallery has increased your exposure to U.S. viewers and given you a wider audience.

I have been showing my work in the U.S. for 15 years, and Cernuda Arte has been instrumental in the development of my work. I think they have safeguarded Cuban art. There are perhaps exhibitions, artists, or eras that are more privileged than others, but that’s simply a matter of selection, of taste. Their presence in a circuit of international art fairs has been dynamic and intense. I am grateful, and I think they are too. The satisfaction is mutual.

When you face the blank canvas, how do you begin? How do you conceive your ideas?

Facing the canvas, first I start to stain the fabric with large movements, and then begin to reduce the coloration to a minimum, to arrive at the details, the synthesis. I hunt for forms. No previous drawings, either on the canvas or in a sketch. Any theme can be the source of inspiration or a picture.

I work 12 to 13 hours a day, sometimes more. I let the gesture dominate the form, because for me art is feeling, it’s pure expression. Otherwise it would be like buying fast food and putting it in the microwave.

The fact of not having a previous design has many risks; the work could be better conceived to meet certain perceptual laws within the realm of aesthetics. But the system of trial and error gives the work a stronger energy each time I impose it.

I cannot separate myself from my work. I am home alone and start painting. When I’m abroad I search out art supply stores, I grab fabrics. Whether in New York, in Madrid, in the snow, in Batabanó or in Vedado, I’m always immersed in my work.

I imagine that you somehow take advantage of research, reading, conversations…

I have studied the history of art and artistic phenomena that interest me; I’m a compulsive reader. But I think the reality, the processes we have lived in Cuba, a society in constant tension, have overwhelmed my creativity.

I try to reflect a phenomenon that emerges in an isolated environment. In this imagined island, in those small towns, people know what is around them. Then, the total annihilation of particularities begins to simplify behaviors and stereotypes. Small habits begin to die and disappear. The languishing Batabanó embodies a personality, a certain character.

I treasure inspiration and inspirational elements. The most important work is my own life, my family, my friends. Each of us has a mission. I have simply been a vehicle, a way to tell what has happened before to someone, or to everyone in a given time. The pictures tell the experiences of many people, but the most important thing is the universality that dwells in man.