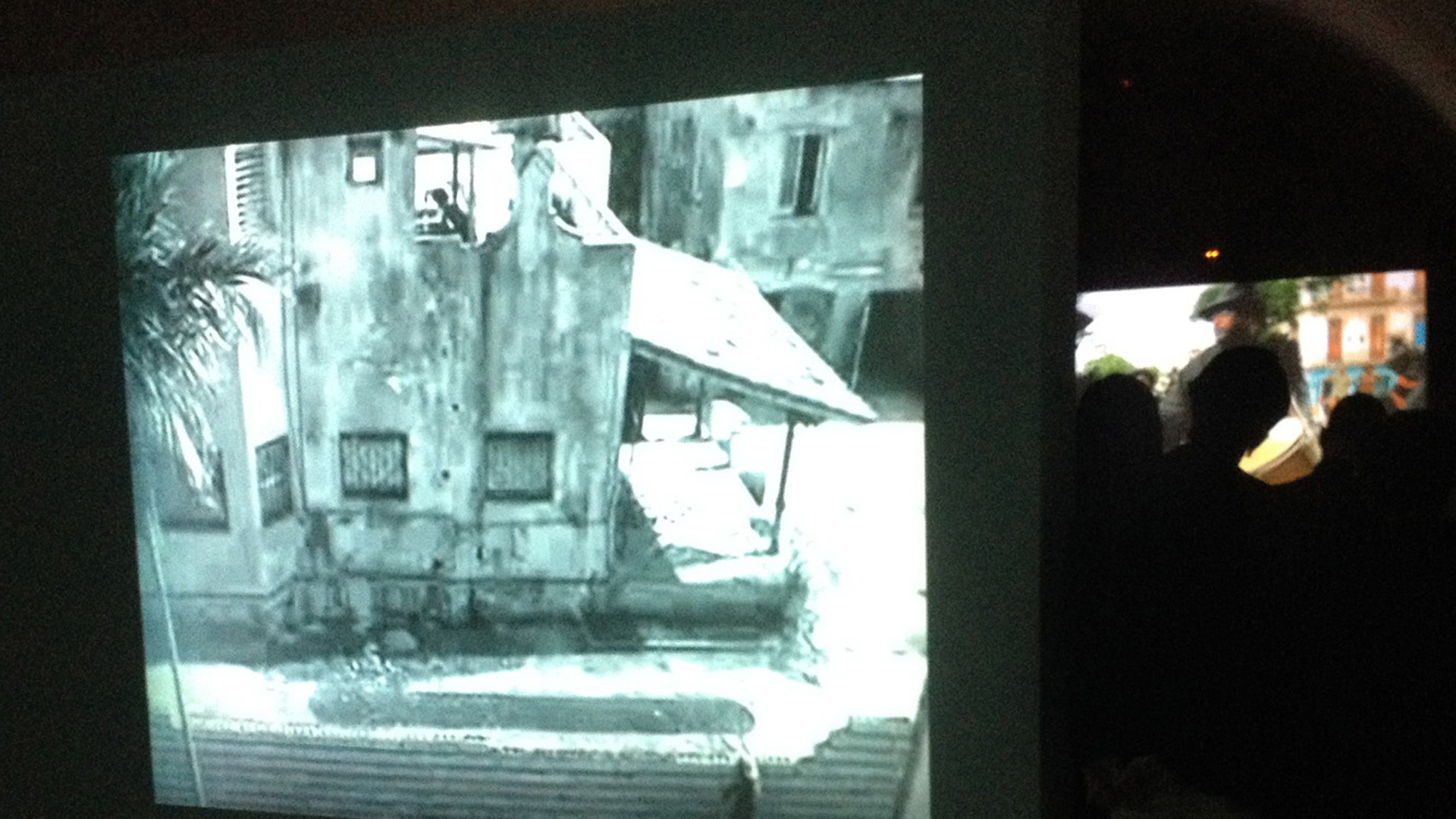 Caribbean: Crossroads in Miami. The show that the New York Times called “the big art event of the [2012] summer season” is headed to the Pérez Art Museum Miami, where it opens April 18. Slightly pared down from three museums’ worth of art in New York, the Miami edition still manages to showcase more than 150 objects spanning over two centuries of history and a variety of themes.

Mosquera in Rovereto. In Perduti nel paesaggio(Lost in Landscape), curator Gerardo Mosquera examines the concept of “landscape” in 21st-century global culture—not only the perception of a given place, but its depiction in one form or another. The expansive exhibition features 170 photographs, 84 paintings, 10 videos, 4 video installations, 4 installations, 4 context-specific interventions, 1 artist’s book, and 1 web-specific project by more than 60 artists worldwide—among them Analía Amaya, Carlos Garaicoa, Glenda León and Glexis Novoa, who also contributes an essay to the exhibition catalogue. On view at MART (Museo di Arte Moderna e Contemporanea di Trento e Rovereto) through August 31.

Habitar, Construir comes to Cádiz. After debuting in Miami in 2012 and traveling to Tampa in 2013, Dennys Matos’s exploration of contemporary Cuban video takes a new form—and a slightly shifted time frame—in southwestern Spain, where Habitar, Construir, Pensar. Videoarte Cubano 2000-2012 is currently on view at ECCO (Espacio de creación contemporánea Cádiz). Taking a global view of Cuban video art, the show includes 23 artists working in Havana, New York, Madrid, Miami, and elsewhere—including Alexandre Arrechea, Los Carpinteros, Lázaro Saavedra, and José Angel Toirac, among others. The exhibition, Matos writes, “teaches us a paradoxical lesson: the artist must be more local and at the same time more cosmopolitan.” The show runs through June 1. For images of the exhibition, see the photo album on the Cuban Art News Facebook page.

Artification in Madrid. Cuban artist Henry Eric Hernández teams up with Catalan artist Pep Vidal in an “exhibition-essay” that calls for a shift from object-focused artmaking to fields of knowledge that are supposedly foreign to art—namely science, and more specifically, the fields of physics-mathematics and archaeology. The idea is a kind of cross-fertilization: using scientific disciplines to “contaminate” the aura of pure art to foster new strategies and conceptualizing. See the results at Cámara Oscura Galería de Arte, where Artification runs through May 24.

Chaos and Identity in Cambridge, Massachusetts. Opening tonight at the Multicultural Arts Center, Chaos and Identity: Floating Island pairs the work of two master printmakers, Ángel Ramírez and Ibrahim Miranda. For both artists, history is not only symbolically but literally layered into their work—for Ramírez, in the objects that he incorporates into his art, and for Miranda, in the atlas pages that he pieces together to form the basis of his prints. The reception tonight runs 6-8 p.m. at the Multicultural Arts Center, where the show, co-presented by Latin Art Space, runs through June 3.

Alexis Lago in L.A. Lago started out as a biochemist trained at the University of Havana, and it shows. His large-scale watercolors of fantastical worlds—hybrid animals and humans, fragments of the heavens—are meticulously detailed and imagined. Alexis Lago: Possible Moves is the artist’s first solo show with a West Coast gallery. On view through May 10.

President Carter drops in on Drapetomanía. Our friends at The 8th Floor sent this snapshot of President Jimmy Carter’s recent visit to the exhibition Drapetomanía: Grupo Antillano and the Art of Afro-Cuba, curated by Harvard professor Alejandro de la Fuente. The exhibition, which debuted last year in Santiago de Cuba, opened last month at The 8th Floor, where it runs through July 18. In the photo, from left: collector and philanthropist Donald Rubin (rear), President Jimmy Carter, The 8th Floor director and curator Rachel Weingeist, and Drapetomanía curator Alejandro de la Fuente.

Cuban jazz in Miami—and New York, Baltimore, New Orleans… He won the first International Competition of Young Jazz Musicians (Jo-Jazz) in 2007, and he’s already performed with the likes of Chucho Valdés, Bobby Carcasses, Javier Zalba, Pablo Milanes, Rolando Luna, and Stanley Clark. Now, Jorge Luis Pacheco is on a quick East Coast tour, with a cross-country hop to Oakland. Catch him tomorrow, April 11, and April 17 and 20, at Drom in New York City, and on Saturday, April 19, at the Miami Dade Auditorium. He’ll also be at Germano’s Cabaret in Baltimore on the 24th, and in New Orleans on April 28.

Book signings, New York City. Those nostalgic for the glamorous, glittering side of pre-1959 Cuba will want to head to the Americas Society/Council of the Americas next Wednesday, or later this month to the International Center of Photography on Friday evening, April 25. At both events, Ramiro Fernández will be signing his new book Cuba Then: Rare and Classic Images from the Ramiro Fernández Collection. Featuring close to 300 images from one of the largest collections outside the island, Cuba Then features everyone from race-car-driving aristos to gangsters, showgirls, movie stars, and other glitterati. Registration begins at 6 p.m. at AS/COA, and the event begins at ICP begins at 6 p.m. too—and on Friday evenings, museum admission is pay-what-you-wish.

Coming up in May. Mark your calendars for Beyond the Supersquare, opening May 1 at the Bronx Museum of the Arts… Without Masks: Contemporary Afro-Cuban Art, making its North American debut May 2 at the Museum of Anthropology at UBC in Vancouver… and Teresita Fernández: As Above So Below, opening at MASS MoCA on May 24.