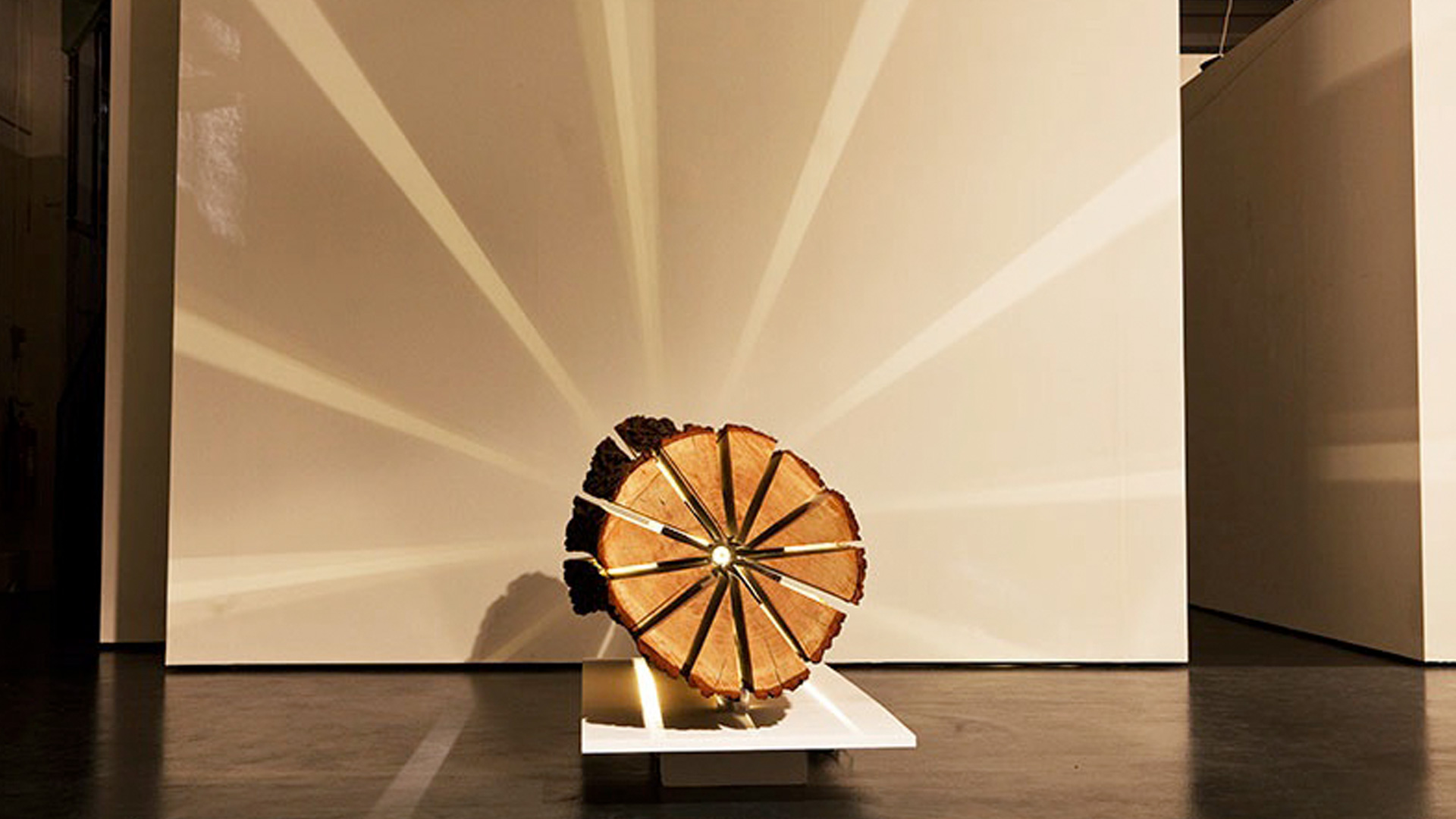 Los Carpinteros in Hong Kong. They may construct sculptures out of Lego blocks, but when it comes to the theoretical underpinnings of their work Los Carpinteros don’t kid around. Heteropias, the title of their first solo show in Asia, was inspired by the French philosopher Michel Foucault, who defined heteropia as a space of otherness—not one place or another but simultaneously physical and mental, like the experience of a phone call. At Edouard Malingue gallery, the Legos are confined to two dimensions, in large-scale watercolors detailing crumbling cityscapes assembled from the plastic blocks. Also on view: meticulously crafted models of openwork structures that reference Foucault’s concept of the panopticon—including a model of Güiro, the full-sized party bar made for last year’s Art Basel Miami Beach. On view through November 23.

Garaicoa in Buenos Aires. The role of Argentina’s banking industry in the country’s recent history—and for that matter, international banking’s part in the global economic crisis—are the focus of Carlos Garaicoa’s solo show at Ruth Bencazar Galería de Arte. Saving the Safe spotlights two installations, including Banco de la Nación Argentina/ Banco Central de la República Argentina (2013), a detailed model of the bank building in question, burnished in gold. The second installation is a portfolio of thin sheets of gold, each associated with a country—Greece, Spain, Portugal, Italy, among others—that has seen popular protests in response to its economic crisis, with a word commonly used by the protesters there delicately embedded in the gold. On view through November 8.

Díaz in Switzerland. This past June, Humberto Díaz made a splash at the Latin American Pavilion of the Venice Beinnale with an ingenious installation work—titled (and made from) 150 metros de soga (150 Meters of Rope). Now, he’s wrapping up an artist residency in Winterthur, Switzerland, where he’ll also take part in the city’s International Short Film Festival in November. Meanwhile, he’s got a solo exhibition at Winterthur’s knoerle & baettig gallery. Destino features drawings, installations, and videos, all part of a broad art project that Díaz began in 2010, focusing on the interaction between humans and nature. Díaz will give an artist’s talk at Winterthur’s Villa Sträuli next Tuesday, October 22, at 7: 30 p.m., and will appear at the film festival on November 9 at 5 p.m., in a panel discussion on Cuban film.

Ballester in Miami. Foucault’s heteropia is probably not unfamiliar to Juan Pablo Ballester, whose solo show, NoWhere, is grounded in a similarly detached perspective. NoWhere presents a selection of photographs from the artist’s core series, En ningún lugar (In No Place). Subtly disrupting the classic photographic genres of portrait and the landscape, Ballester’s rarified scenes seem to originate from an alternate reality, in which the primary experience is a profound sense of displacement. On view at the Farside Gallery through Sunday, October 27.

Hernández in the Netherlands. At last year’s Havana Biennial, Inti Hernández’s circular bench-sculpture Bancotodos (2012) offered a welcome resting place for strollers taking in the Detrás del muro public art show along the Malecón. Earlier this month, Hernández unveiled the latest open-air addition to his “Encounter Place” series: Openlucht Lokaal, an open-air classroom commissioned by the Notre Dame des Anges school in Ubbergen, in the Netherlands. The school is based on promoting a harmonious relationship between humans and nature, and a non-hierarchical exchange between teachers and students; Hernández’s open, circular design supports both concepts.

Miranda in Taipei. Inspired by cartography and Chinese calligraphy, Reminiscences of the Island – The Map Series of Ibrahim Miranda showcases 25 works from a print series that the artist has been developing for the past 15 years. The process begins with Miranda putting six pages of an atlas together to form a two-meter-long scroll. Influenced by José Lezama Lima’s poem “Noches Insulares; Jardines Invisibles” (Insular Nights; Invisible Gardens), Miranda explores the idea of the islander confronting both history and modernity. “I turn my island into something that one never knows what exactly it is,” Miranda says, “because it experiences an endless metamorphosis…” The show is on view at the Chi-Wen Gallery in Taipei through October 26.

Caribbean Cream in New Jersey. Ibrahim Miranda is also one of the 14 artists in Caribbean Cream: What you do is what you see, the inaugural show at BrutEdge Gallery in Jersey City. Miranda joins Elsa Mora, Carlos Estévez, and Pável Acosta as the Cuban contingent in this group show, which also features artists from Barbados, Haiti, and Jamaica. Founded by a pair of Haitian art collectors, BrutEdge will show global contemporary art with a focus on artists from the Caribbean, the Americas, Africa, and outsider artists. Caribbean Cream runs through November 23.

Arte Cubana in London. This group exhibition at Heike Moras Art features the work of four artists: Alexandre Arrechea, showing sculptures, watercolors, and prints related to the “Park Avenue Project” sculptures that debuted in Manhattan earlier this year; Glenda León, whose work here turns nature and landscape into music; Roberto Diago, represented by canvases from his “Entre lineas” series; and Sofia Maldonado, a painter born in Puerto Rico to a Cuban mother. The exhibition runs through October 28.

Guerra de la Paz in Brooklyn… and Japan. The artmaking duo Alain Guerra and Neraldo de la Paz—better known as Guerra de la Paz—are among the artists in Setting Forth, the group show on view at Brooklyn’s Julian Navarro gallery. The show spotlights the artists’ use of performative elements in their work, which is hardly a stretch for Guerra de la Paz, who’ve made found objects—particularly used clothing—a fundamental material for their art. Setting Forth runs through October 26. The pair is also participating in the Aichi Triennial 2013, “Awakening: Where Are We Standing? Earth, Memory, and Resurrection,” which runs through October 27.

Puente in Vermont. At the Helen Day Art Center in Stowe, Vermont, Puente: An Exhibition of Cuban Artists brings the work of seven artists from last year’s Havana Biennial to New England ski country. Photographs, sculptures, prints, and drawings on canvas are among the works by Abel Barroso, María Magdalena Campos-Pons, Arles del Río, Adrián Fernández, Dalvis Tuya, Sandra Ramos, and José Ángel Vincench that are on view through November 24.

Korda Moda in California. The Cuban Avedon? Before he became a leading photographer of the Revolution—and long before he snapped that iconic shot of Che—Alberto Korda (Havana 1928-Paris 2001) was the island’s premier fashion photographer. In celebration of what would have been his 85th birthday—and the 75th of one of his favorite models, Norka—the photographer’s daughter, Diana Díaz López and curator Ron Herman, have put together the first exhibition of Korda’s fashion photography from before the Revolution and after. The show runs through December 6 at the Foothill College Krause Center for Innovation Gallery in Los Altos Hills, California, in Silicon Valley below San Francisco. Next Wednesday, October 23, curator Ron Herman will give a noon talk at the gallery to commemorate Norka’s birthday.

CINTAS Fellows Announced. Congratulations to the winners of the 2013-14 CINTAS Foundation fellowships: artist Angela Valella, writer Daniel Castro, and musician Yosvany Terry. The awards were announced last week at the opening reception for the exhibition of finalists’ artwork at the MDC Museum of Art + Design. The exhibition remains on view through December 15.

Save the Date in Miami. On Friday, November 1, The Silent Shout: Voices in Cuban Abstraction opens at ArtSpace/Virginia Miller Galleries in Coral Gables. Curated by Janet Batet and Rafael DiazCasas, the exhibition showcases the work of nine artists, from Loló Soldevilla to Raúl Martínez to José Ángel Vincench.