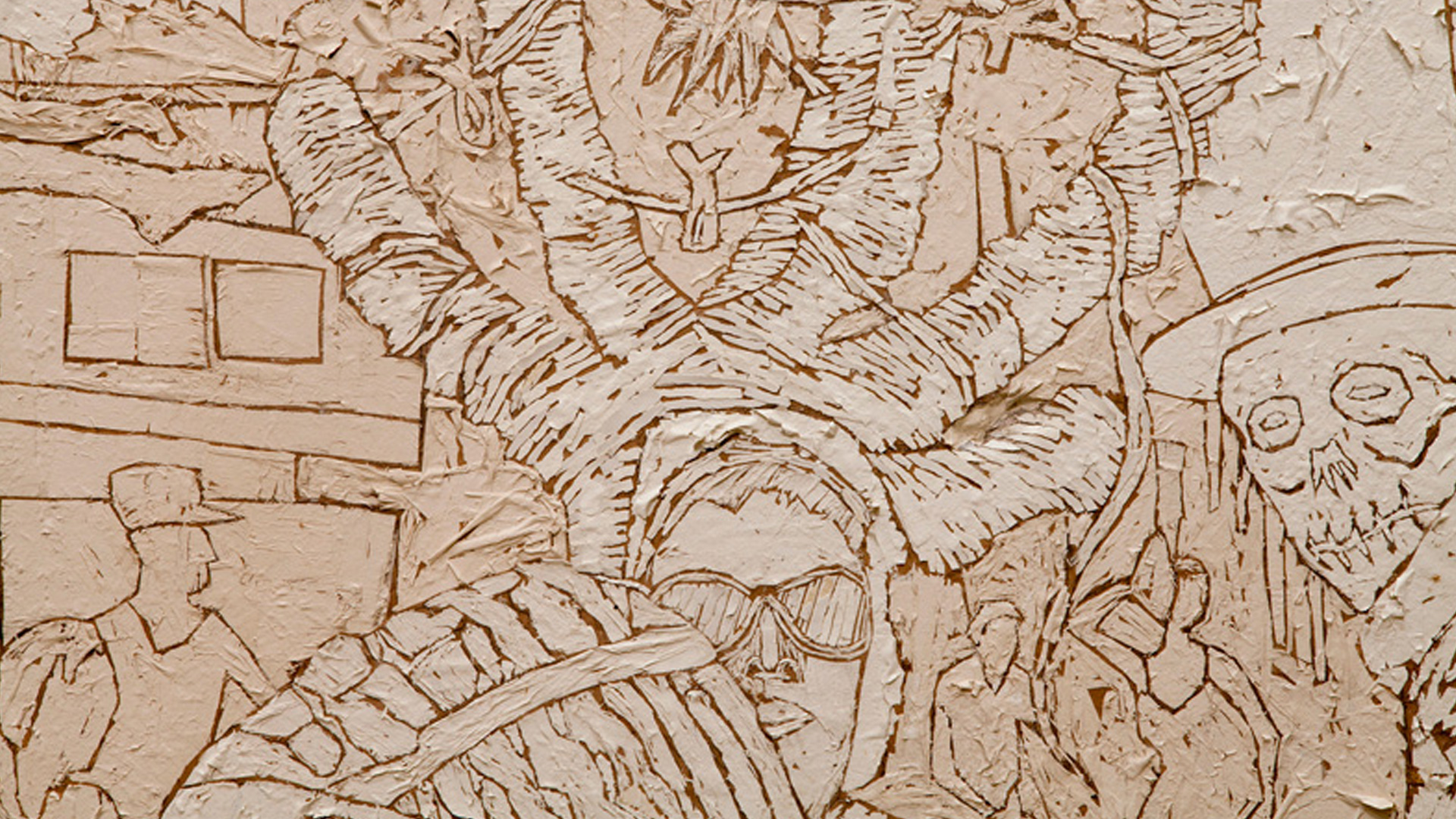 Cuban artist Pavel Acosta was invited to participate in Here is Where We Jump, the Bienal that opened last week at El Museo del Barrio in Manhattan. Here, Acosta explains his thinking about Wallscape, and how the project fits into his ongoing work.

Wallscape is a reproduction of one of the paintings from the museum’s permanent collection. As part of the project, Acosta wanted to reproduce whatever work was on the wall opposite the one he was assigned—the choice was up to the Bienal curators. They chose Goat Song #5: Tumult on George Washington Avenue, a 1988 canvas by Manuel Macarulla. Wallscape is a collage made from the different layers of paint that Acosta found on his wall, which he recovered by painstakingly scraping each layer until he reached the brown paper of the sheetrock.

Here is Acosta’s description of the project:

Wallscape has an antecedent in the series Stolen Paint, 2008-present, that I started in Havana, Cuba. Back then, I decided to incorporate in my artistic process the way Cubans survive the daily hardships, as the state doesn’t pay them enough to make a living from their jobs. They steal the state’s property to then re-sell it in the black market. In 2008, I started stealing paint chips from different surfaces all over Havana. I searched for paint that was already aging and falling apart on walls, doors, chairs, cars, etc., and used in it my collages. The visual result was related to the aesthetics of Havana itself, which is very deteriorated. I am very interested in the idea of recycling in art, and it is also important for me to re-codify the materials used. Once I came to live in the States, I kept working with this technique, but the pieces began to relate to other concepts and contexts.

When I was invited to participate in the Bienal, I had in mind that I wanted to reproduce the piece that was on the wall in front of the one I was assigned. I knew I would use the old paint I found on the wall, but I had no exact idea of what the result was going to look like. The piece on the opposite wall ended up being very colorful, carnavalesque, and baroque—Goat Song #5: Tumult on George Washington Avenue, 1988, by Manuel Macarulla—and the paint I found on my wall was mostly monochromatic, with different tones of white, thus creating a great contrast.

Even as part of El Museo’s Bienal, Wallscape is presented in one of the rooms where the permanent collection is shown. It is therefore an intervention in El Museo’s permanent collection as well. With this piece, I am interested in raising questions about the role of art institutions today, and their relationship with contemporary art. My wall—an exhibition wall—stopped being a neutral element that doesn’t interfere physically or aesthetically in what is shown. After I rearranged its surface, it became the protagonist. Once intervened, this wall has been invalidated forever. When the exhibition is over, it will need to be replaced by a new wall. It will die as an exhibition wall and continue to live as an art piece.

Wallscape recalls a miraculous apparition, or the effect left in the eyes when shifting the sight from a very colorful and illuminated landscape or object to the dark. That is hopefully a relationship the public can establish after going around the gallery and finding the connection with the piece on the opposite wall.