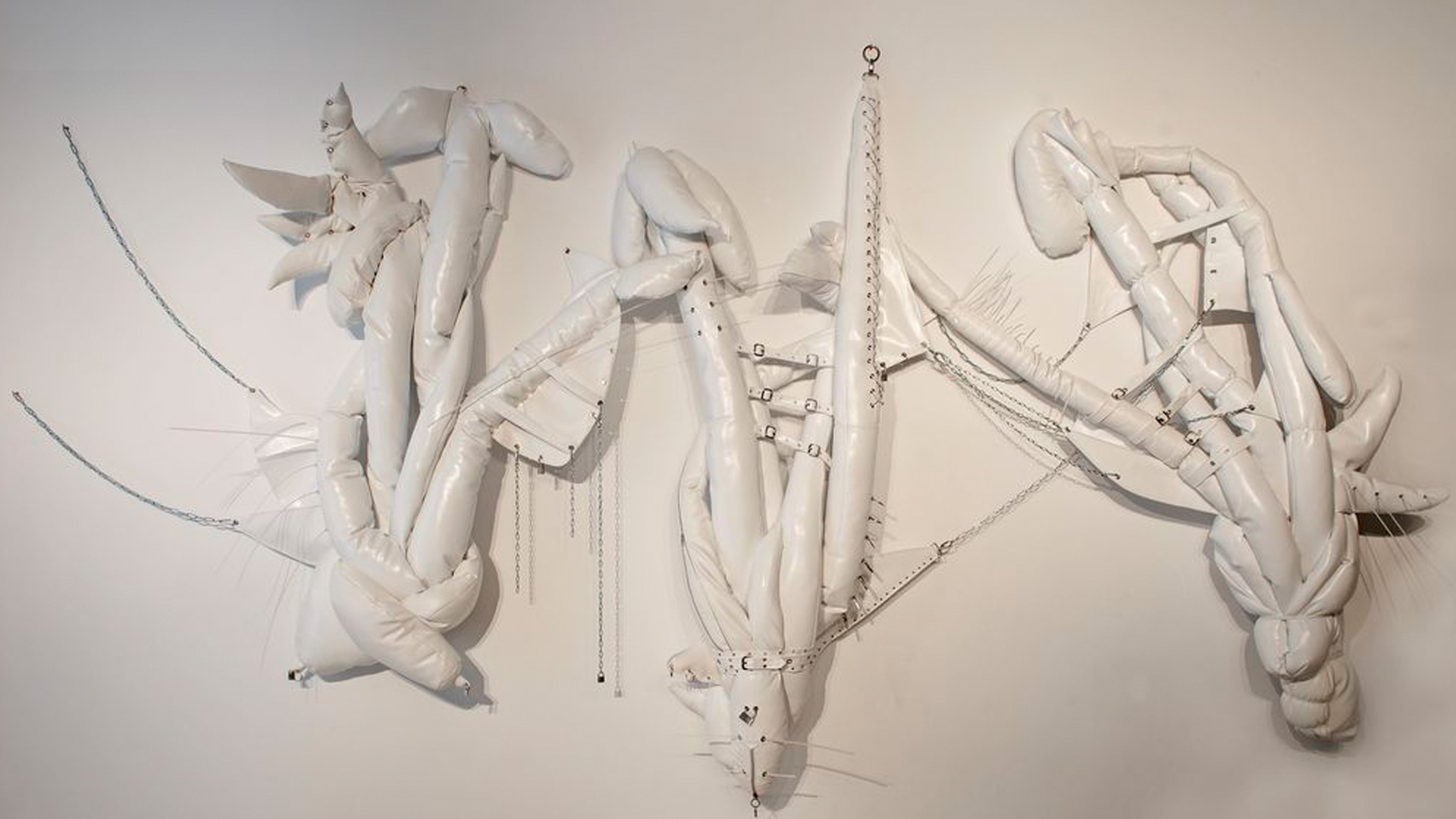 De la Fuente has described Grupo Antillano as a forgotten visual arts and cultural movement that thrived between 1978 and 1983. The group proclaimed the centrality of African practices in national culture. For them, Africa and the surrounding Caribbean was not a dead cultural heritage but a vibrant, ongoing and vital influence that continued to define what it means to be Cuban.

Yet de la Fuente was surprised to discover that neither the art nor the very existence of Grupo Antillano is remembered today. As he puts it, Grupo Antillano has been removed from all accounts of the so-called «new Cuban art,» which took shape precisely during those years and is frequently associated with the legendary exhibition Volumen Uno (1981). In contrast to Grupo Antillano, says de la Fuente, most of the artists of Volmen Uno did not look towards Africa or the Caribbean for inspiration, but to new trends in Western art.

For more images from Drapetomanía, visit the Facebook pages for Cuban Art News and the Farber Collection.

Let’s start by talking about Grupo Antillano. Could you give us a few more details about the movement?

Created in 1978 by sculptor and engraver Rafael Queneditt, the movement was initially centered in Havana, but quickly grew to encompass artists from other provinces like Camagüey (Oscar Rodríguez Lasseria, Herminio Escalona) and Oriente (Alberto Lescay, Julia Valdés, Miguel A. Lobaina, and Angel Laborde Wilson, among others). Ever Fonseca was already in Havana, but had grown up in rural Oriente as well.

It is nearly impossible to establish a fixed number of members for Grupo Antillano. The initial group of six or seven members had grown to 21 by 1982, not counting honorary members like Wifredo Lam—who exhibited regularly with them between 1979 and 1982—René Portocarrero, and Rita Longa. There were numerous intellectuals who also collaborated with the group and were sometime listed as members in their catalogues, such as Sergio Vitier, Rogelio Martínez Furé and Guillermina Ramos Cruz. It was mostly a male group, but several artists were women: Adelaida Herrera, Clara Morera and Julia Valdés. Rita Longa participated in five of their exhibitions and sometimes they would invite other female artists as well, like Lesbia Vent Dumois.

What medium or media did the Grupo Antillano artists use most frequently? Did they share a common style?

There was no shared style, and they were not interested in that. What the artists of Grupo Antillano shared was a common interest in Cuban culture and Cuban identity. Their art sought to promote a vision of the Cuban nation that was anchored in its Caribbean and Atlantic past, a past inevitably linked to slavery, the Middle Passage, and the production of tropical commodities. It was an African Cuba. Other cultural influences found space in the Group’s exhibitions, but African cultural references were clearly predominant.

Perhaps that explains why many of them used humble materials in their works—wood was perhaps the single element most frequently used. Their Africa was not a dead Africa, however. It was not a distant or folkloric «root.» To them, African-based cultural practices continued to inform (in present tense) the lives of ordinary Cubans. Imagine what it was to proclaim this in Cuba in the late 1970s, after African religious practices had been derided for years as primitive and grotesque «remnants of the past,» a folkloric curiosity at best. It was nothing short of revolutionary.

What was the relationship of Grupo Antillano artists to the Volumen Uno artists? Did it change as time went on?

I think they lived and worked in distinct artistic circles, pursued different goals, and had different conceptions of art. There was also a crucial generational gap between them. The Volumen Unoartists were youngsters imbued with a desire to apply the latest trends in Western art to a critical reading of Cuban art, history, and culture. The artists of Antillano—at least the initial core members of the group—were much older, and their concerns about African cultures and about Cuban identity probably felt terribly passé to the artists of Volumen Uno.

The work of Grupo Antillano was anchored in the history of the Antilles, in their shared past and in a deep respect for their African ancestry. Volumen Uno looked forward—the exhibition was a first edition, a pioneering event. Some of the sculptors of Grupo Antillano, such as Ramón Haití, Rogelio Rodríguez Cobas, and Rafael Queneditt, took pride in their ability to master traditional wood carving techniques, something that the artists of Volumen Uno probably saw as the work of traditional artisans, not contemporary artists.

Yes, that’s an interesting juxtaposition. What do you think will emerge from it?

Writing in 1979, the great Cuban ethnographer Rogelio Martínez Furé announced that, with Grupo Antillano, a “new” Cuban art had been born. Yet what we know as “new Cuban art” is not the art of Grupo Antillano, but the art that followed the path of Volumen Uno. I suggest that we should at least consider the work of Grupo Antillano in any discussion of the “new” Cuban art that emerged during these years. I also mean to signal that we need to study seriously the history of Cuban postrevolutionary art. Volumen Uno was of course key—nobody disputes that—but there were other approaches, other spaces, other ways to do art in Cuba that should not be erased from history. What this exhibition does, literally, is to remember Grupo Antillano.

Let’s talk about the exhibition. Roughly how many works are in the show? Of these, how many are works by the original Grupo Antillano artists?

How difficult was it to assemble the original Grupo Antillano works? Why?

Well, just identifying who was a member of Grupo Antillano and locating them or their families was quite a challenge. But I am a historian, you know. I am used to working with fragments; the past always comes to us in pieces. I would not have been able to do the exhibition without the support and the generosity of the families of those artists who are no longer physically alive, such as Haití, Ocejo, Ayala, and Couceiro. Fortunately, Queneditt knew where to find most people, and Guillermina Ramos Cruz helped to locate others.

Broadening the exhibition concept to include work by current artists is an interesting curatorial decision. What led to that choice?

First of all, I learned about Grupo Antillano because of Queloides [a previous exhibition about Afro-Cuban themes in contemporary art, co-curated with artist Elio Rodríguez Valdés]. While working on Queloides, I read about Grupo Antillano, a movement that, shame on me, I did not know. Here was a cultural movement that had articulated visions and concerns that were similar to those expressed later by the artists of Queloides.

I had always presented Queloides as a product of the social and economic changes linked to the so-called Special Period, but maybe there was another way to look at Queloides—maybe there was a longer, invisible thread connecting different attempts to highlight issues of racial diversity in Cuban postrevolutionary culture. Of course, these possible connections are my own suggestion. They do not depend on the introspection of each artist, many of whom had never heard of Grupo Antillano, although they all knew the work of at least some of the individual artists. On the other hand, I saw other interesting parallels between both groups. Queloides had been erased from the annals of Cuban art, just like Grupo Antillano. Was this just a coincidence?

Tell us about the exhibition title. What does the use of the 19th-century invented word drapetomania add to the conversation?

I suppose the historian who lives in me is to blame for this. I use a term lifted from the jargon of the pseudo-science of race in the 19th century to suggest the persistence and credibility of an ideology that denigrates African cultures, and blackness, even today. Such ideology—an ideology backed by the alleged objectivity of Western science—can only be dismantled through active and conscious work, the sort of creative work, of cultural resistance and cimarronaje, undertaken by the likes of Grupo Antillano.

The book associated with this project comes out this summer. What’s the thinking behind it?

The book seeks to tell the story of Grupo Antillano, to reconstruct their exhibitions and to convey the importance of their work. It contains essays by Guillermina Ramos Cruz, the art critic who worked with Grupo Antillano during their years of activity; by Cuba’s foremost art historian and archivist José Veigas; by Judith Bettelheim, who included a discussion of Grupo Antillano in her groundbreaking AfroCuba: Works on Paper, 1968-2003; and by myself. There are also testimonial texts by Queneditt and by playwright Eugenio Hernández Espinosa, one of the many intellectuals who collaborated with Grupo Antillano. A section of the book looks at the work of each of the artists of Grupo Antillano. The book is not an exhibition catalogue, although a final section reproduces the works of the contemporary artists who participate in the show. I thought that the best way to counteract the erasure of Grupo Antillano from Cuban art was to produce a book documenting their activities and contributions. It is fair to debate the importance and the nature of their work; what is not fair is to ignore their existence.

The show premieres at the Galería de Arte Universal in Santiago de Cuba. Will it travel after that?

We wanted to debut the exhibition in Santiago, the Caribbean capital of Cuba, and the place where Fundación Caguayo, which has supported this project from the very beginning, is based. It will go to Havana later this year (we are in conversations with a couple of venues—stay tuned) and will travel to the United States in 2014. I have been working with Rachel Weingeist to show it at The 8th Floor gallery in New York City in the spring of 2014. It will then travel to the Museum of the African Diaspora in San Francisco in the fall of 2014. It will also be shown at the new Ethelbert Cooper Gallery at Harvard University, my new home institution, in 2015.

Anything else you’d like us to know about Drapetomanía?

Yes. I wish to express my gratitude to the Ford Foundation, especially to Mario Bronfman, for their support, to Fundación Caguayo for working with me in this project, to the members of Grupo Antillano for giving me unlimited access to their personal archives, and to all the participating artists for agreeing to take part in this exhibition. As usual, I received a lot of logistical support from the Center for Latin American Studies at the University of Pittsburgh.