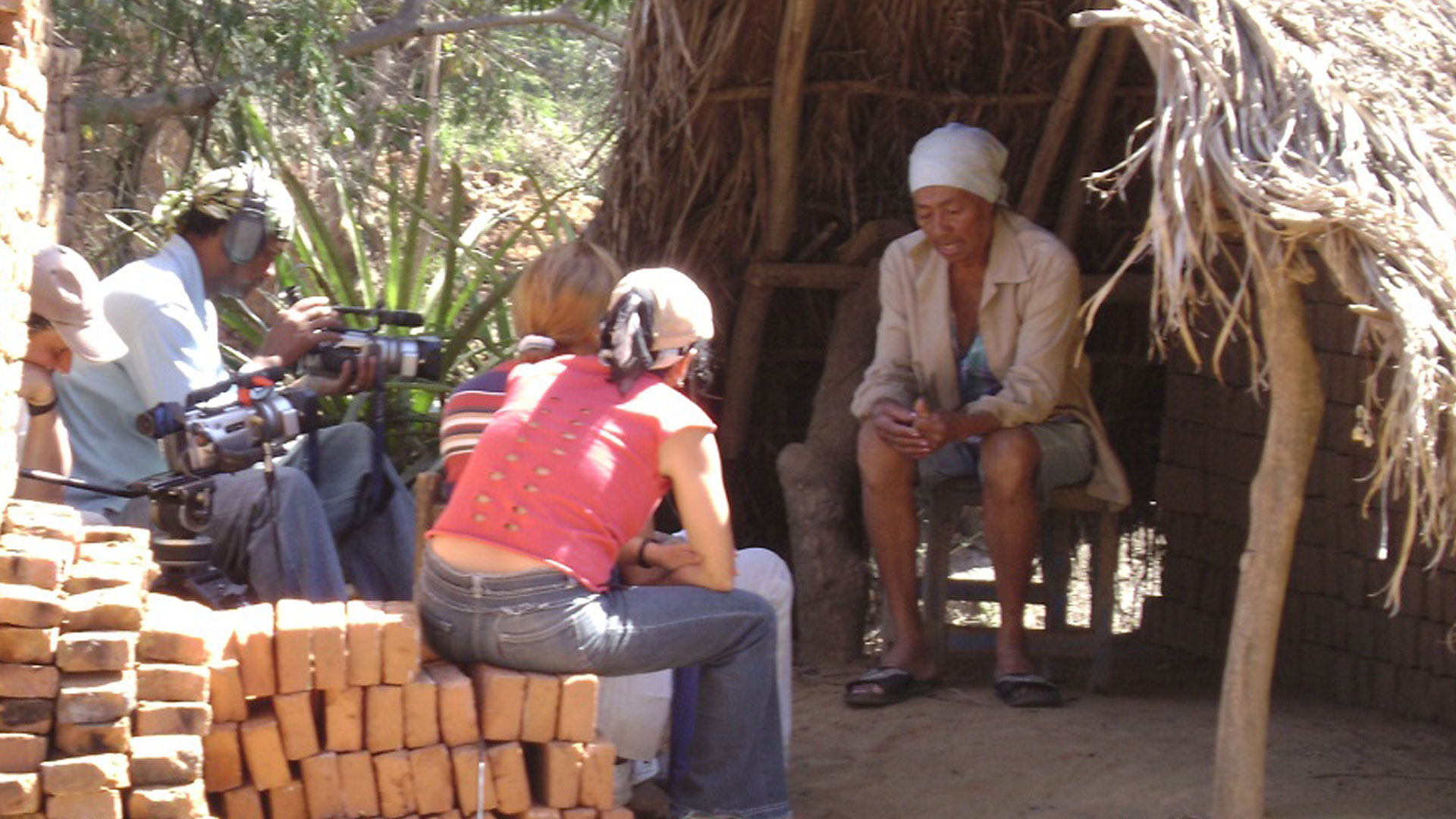 Documentary Fortnight is an international festival of nonfiction film and media, presented annually by New York’s Museum of Modern Art (MoMA). It examines the relationship between contemporary art and nonfiction practices, and reflects on new areas of documentary filmmaking. The 12th edition of this important documentary showcase, which took place February 28 through March 4, for the first time featured four programs of recent short films by Cuban filmmakers. Documentary Fortnight is organized by Sally Berger, Assistant Curator in MoMA’s Film Department. She selected the “New Cuban Shorts” in collaboration with Alexandra Halkin, director of the Americas Media Initiative (AMI).

“New Cuban Shorts” included fourteen productions made between 1993 and 2011 by emerging directors. Most of the films were U.S. premieres and offered insightful views of the countryside and of Cubans beyond Havana. Armando Capó, Ariagna Fajardo, Liván Magdaleno, Alejandro Ramírez Anderson, and Benito Zambrano were among the directors featured in the series—as was artist Sandra Ramos. Fajardo and Capó were present to discuss their work with the audiences in New York.

Alexandra Halkin explained that the films came from a variety of sources in Cuba, including the Muestra Joven (Young Filmmakers) Festival, Television Serrana, ICAIC, EICTV, ISA, and from the filmmakers themselves. Most of the productions were translated and subtitled for this occasion. Major support for the project was provided by the Ford Foundation.

Because most Cuban films seen in the U.S. focus on Havana, the organizers wanted to highlight films from other parts of the island. Ariagna Fajardo, for instance, is from the Sierra Maestra and received her training at Television Serrana (TVS). In her film, ¿A donde vamos? (Where Are We Going?, 2009), a group of farmers talk about the problems, such as lack of tools and transport for their crops, that are forcing them to abandon their homes in the Sierra. This film was shown on national television in Cuba and helped to bring about changes that improved the farmers’ situation. La Vuelta (The Bend, 2008) observes a community of brickmakers at their work and reflecting about the backbreaking labor that enables them to survive. Fajardo’s most recent work, Papalotes (Kites, 2011), documents the day-to-day frustrations that everyday people encounter. She views it as a “message to ourselves”: why aren’t we doing more to bring about change?

Television Serrana, Cuba’s first community television organization, began in 1993 as a UNESCO project. Since then, TVS has produced almost 500 documentaries that speak to the lives and concerns of the people of the Sierra Maestra. All of the filmmakers working there now are children of the local farmers. Though some TVS productions air on national television, they’re primarily made for local communities. TVS teams take the films and projectors from town to town by car, and even by horseback in some cases.

Filmmaker Armando Capó is also from eastern Cuba, a native of Jibarra. His short film, La Inercia (Inertia, 2008), is a poetic metaphor, an expressionistic journey on the Hershey railway that runs from Matanzas to Havana—a journey he took when he left to go to Havana. Nos quedamos (We Stay, 2009) shows a family in the path of the 2009 hurricane who remain to fight an infestation of bees in their home. His film-school thesis film, La Marea (The Tide, 2009), quietly observes the life of a man whose home is an abandoned barge in the bay of Santiago de Cuba, and his reaction to a mysterious letter that is never explained. In response to a query from the audience, Capó stated that he is not concerned with distinctions between fiction and documentary. It’s possible to shoot an observational documentary, he said, and edit it to create an interesting story.

The series also included several shorts by Alejandro Ramírez Anderson. In De Moler (The Mill, 2004), former sugar mill workers regret the destruction of the mill that was the focus of their lives and livelihood for many years. Monteros (Hunters, 2006) accompanies a group of hunters who capture alligators, wild boar, turtles, and anything they can find to feed their families. The men speak openly about their feelings for their wives and sweethearts, and their hopes that their children will not have to risk their lives hunting as they have done. A more recent film, Archivo de Lidia Doce (Lidia Doce Archive, 2010), combines archival material and interviews with surviving members to tell the story of the first female battalions formed after the Cuban Revolution.

The earliest film in the program was a 1993 work by Benito Zambrano Tejera, Los que se quedaron (The Ones Who Stayed), in which a mother who remains an active supporter of the revolution talks with feeling—and some bitterness—about her eldest son’s decision to leave Cuba in 1980. This was one of the first films to deal with that issue directly.

Other selections included Cisno cuello negro, cuello blanco (Swan, Black Neck, White Neck, 2009), by Marcel Beltrán. Grade-school students write their wishes on bits of black or white paper which are then assembled into a sort of origami swan: “I wish the roof would be fixed; I wish my quinceañera would be the best; I wish the U.S. would lift the embargo,…” Guanabo 23 (2007), by Beatríz García et al., shows a day at the popular beach outside Havana, and makes an ironic statement about environmental concerns. Liván Magdaleno Cruzata’s Las Sombras Chinescas de Liborio (Liborio’s Shadow Play, 2008) explores personal dreams through a complex weave of historical and psychological events that includes scenes from Memories of Underdevelopment (1968) by Tomás Gutiérrez Alea. The program concluded with artist Sandra Ramos’s short animated work, Carrera de relevo (Relay Race, 2010) in which runners pass the baton in a race to take Cuba to the finish line: from Columbus to Uncle Sam to the 1930s cartoon figure El Bobo to Lenin to another cartoon figure, Liborio, who symbolizes the Cuban peasant, and finally to the artist herself.

New York audiences were curious about restrictions faced by Cuban filmmakers and whether documentary subjects feel free to express themselves. Armando Capó noted that all productions belong to the state. Filmmakers learn to work within certain limits to get their films made. When films are made through ICAIC (the state-run film institute), there are so many bureaucratic accounting procedures that the film ends up costing more than it would have if filmmakers could make it themselves. As a result of new digital technologies, he added, there are now many independent filmmakers working in Cuba because they can shoot and edit on their own. Ariagna Fajardo stated that the people they film for Television Serrana express their opinions freely. But filmmakers are not allowed to send funds out of the country, so they can’t pay festival entry fees, for example, or send their films directly to festivals. They have to work around these restrictions.

In spite of restrictions and the lack of resources, documentary filmmaking is very strong in Cuba. Filmmakers are making important work about what they see and what concerns people. Both visiting filmmakers noted that the work of Cuban director Fernando Pérez (Havana Suite, 2003) has been a big influence on their generation.

AMI director Alexandra Halkin observed that there is a high level of cinematic sophistication in Cuba, even in rural areas. Film schools introduce students to international cinema, and recent films circulate throughout the island, often as pirated copies on flash drives—what Armando Capó described as the “USB channel” for dissemination.

A number of the Television Serrana productions are available in the U.S. from the Americas Media Initiative (AMI), which was founded in 2010 to produce, distribute, and exhibit community-oriented media made in the Americas. Last year Berger and Halkin organized Closing Distances/Cerrando Distancias, which toured U.S. short documentaries to several Cuban cities. MoMA’s Documentary Fortnight program of “New Cuban Shorts” grew out of those exchanges.