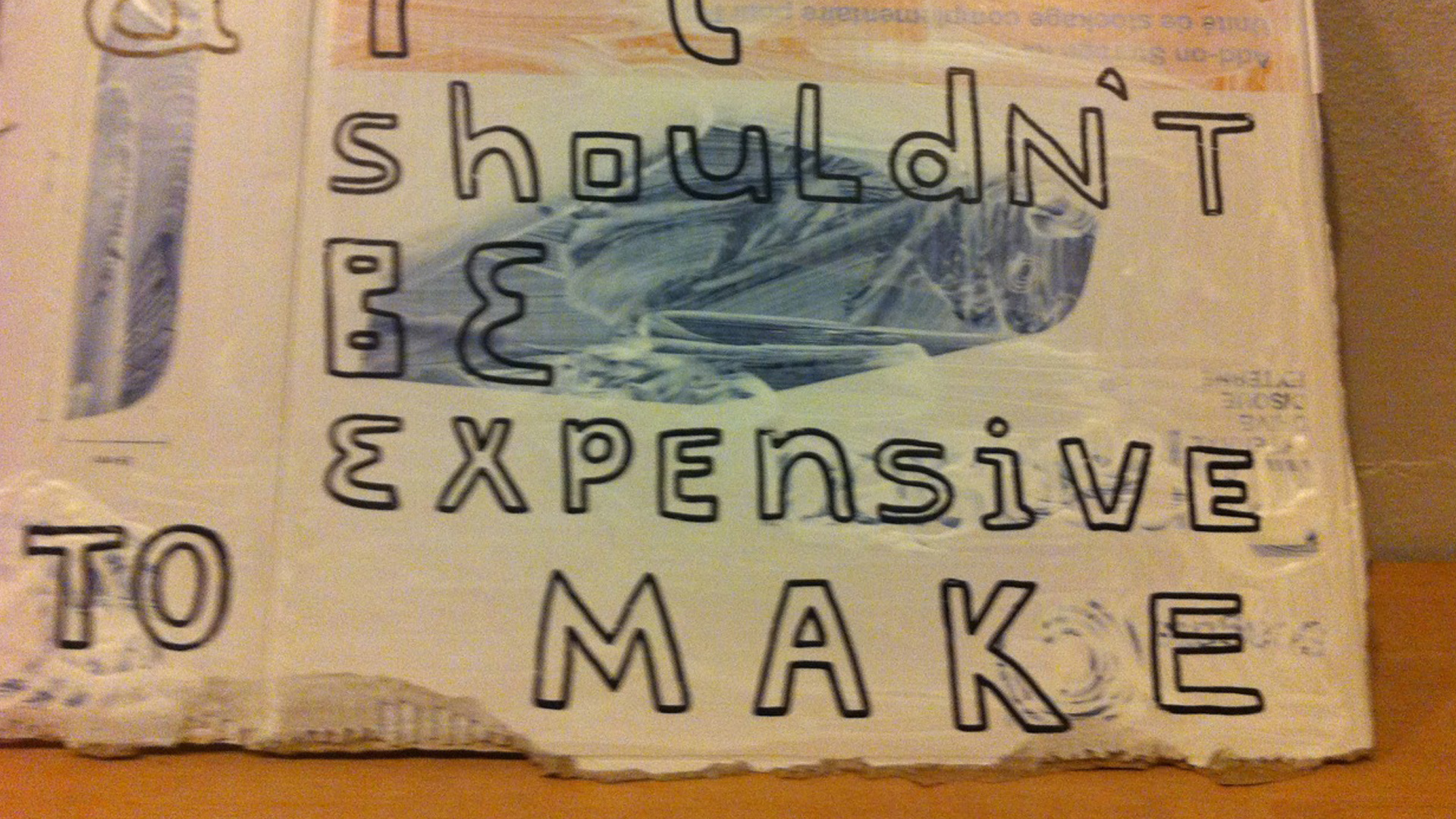 Surely Antonio Eligio Fernández (b. Havana, 1958)—better known as Tonel—devotes countless hours to contemplating ideas, interpreting what he reads, and analyzing international news to create his own philosophy of life. He is an intellectual who, through his texts, sculptures, installations works, and drawings, channels both questions and answers, uncertainties and affirmations.

“Reflection, and the ability to ask questions, should be part of the creative process,” he asserted during an interview at Factoría Habana. There, we caught up with his solo exhibition, El viaje (paredes que hablan) — The Journey (Talking Walls), on view through March 20.

In El viaje (paredes que hablan), works from the 1990s re-emerge, along with other milestones that mark your career as an artist. What’s the idea behind this confrontation between past and present?

It fleshes out a curatorial idea that came from a collaboration between Concha Fontenla, director of Factoría Habana, and me. The show takes the idea of the journey as its springboard, moving from the individual body, male or female, to the body of the nation, the global, and the cosmic. The exhibition brings together works from different periods: Mucho Color, 1992, and others from 1994 such as Constructivo and País deseado, together with the most recent works, including Simplemente ve detrás del dinero (2012) and the series “Borroso» and «Hacer arte no debería ser caro,” both from 2009.

País deseado was presented here at Factoría in May 2012, as part of the exhibition Metáforas del cambio (Metaphors of Change), a collateral show to the 11th Havana Biennial. From that moment on, it’s been displayed in the gallery. When she talked to me about doing a solo show at the Factoría, Concha wanted us to leave that piece in place. We had to think about that—about how to create a coherent discourse that would include this work.

In that regard, it was important that along with País deseado, there be other works that reflected my concerns in the 1990s, which were closely related to the representation of the Cuban map—the largest island of the archipelago—its silhouette and other essential symbols like the Cuban flag.

I bet on that practice very early. I like simple materials, even in drawing: ink, paper, colored pencil, the brush, and the wall, all of which are readily at hand. It also has to do with an interest of mine in the way some people use these building materials to solve vital problems, at an architectural level. It´s not always the most beneficial for the city from the urban-planning point of view, nor as design, but it´s the way people have to solve their problems, mostly with no technical preparation.

Most of them don´t have a good working knowledge of how to use bricks, tiles, angle irons, or rebar. They simply implement their ideas of how to build their homes or remodel them. One way or another this has influenced the city’s appearance and how it’s changed since the years of my youth, especially since the 1980s and 1990s, when I started to get involved in the art world more actively. Maybe I’ve internalized these changes, and I have tried to express them in the work.

How much has the Tonel from the 1980s changed?

At that time I was primarily working on paper. At the end of the decade there was a turn to three-dimensional work, which I had already enjoyed in 1982 with the work of the Hexágono Team, and in 1983 when I mounted an exhibition of sculpture along with Carlos González and Florencio Gelabert Soto. But the inclination toward sculpture and installation is something that happened gradually, especially from the 1990s on. I´ve gained experience. I’ve had the opportunity to learn more about art and to understand, in retrospect, where my ideas come from. I would say, by the way, I am now more aware of what I do, and enjoy the work of other artists more.

When do we know we’re facing a genuine work?

I would not dare to say there is a particular way or formula to figure that out. There are works that move me—some painted four or five centuries ago, others made thirty or forty years ago, or now. Enjoying them is a unique and ineffable experience. It cannot be caught or translated into words, but when that happens, then I think we are in front of the genuine article.

At the moment of creating a work, a visual discourse, how important is your background in art history?

The art historian is, to some extent, a viewer with knowledge and information. You analyze previous work, at the national level or international. You value the work of these artists, go deeper trying to understand their reasons for doing what they do, reflect on the artistic process. Based on this I could also, to some extent, analyze my own work.

What was also important in my training, in the early years of my career, was working in print publications, doing illustrations and caricatures. I dedicated a lot of time to this, mainly in the 1970s and early 1980s. It’s an exercise I enjoy and still do it sometimes. Lately I’ve done illustrations for children’s books.

You seize the conceptual, the metaphorical, the symbolic, the philosophical from the geography of the body, the nation, the cosmos. Would you say that art is a path to reinterpreting what is known and discovering what is not?

Art helps me formulate questions about what I know and what I don´t. You know there are problems, but you aren’t sure how to define them. That happens, for example, with the series “Borroso” (2009-2012) in this exhibition. It is an ongoing series, of which 20 drawings are presented here, addressing the global economy, neoliberalism, recent financial crises, and the ups and downs in the stock markets’ most influential investments. I don’t pretend to have a deep understanding of these issues, but certainly art gives you the opportunity to delve into complex realities, sometimes guided by intuition, and to convince the viewer to share these explorations and views with you.

How does the contrast between Vancouver and Havana affect your work—your definitions and your poetics?

I´ve lived in Vancouver about seven years now. The city is located in the most British province of Canada, near the Pacific. I ‘ve had professional and personal ties with the city for fifteen years. The Asian population there is a strong presence, both immigrant and born in the region, with Chinese ancestry, and Japanese, Korean, Pakistani, Filipino. There are also European populations, and natives who were there before the Europeans arrived. So I am immersed in a much more multicultural society than the one in Havana. However, although I spend most of my time there, I like to think I am in Havana. I come to Cuba once or twice a year. I maintain professional relationships of all kinds here, and most of my family lives in this country.

Vancouver has a natural setting and climate that’s of course different from any province of Cuba, but to some extent it is like Latin America cities, in that people there walk and use public transportation, there’s street life—people out talking on the sidewalk. I like that.

The contrast between the two places has influenced me, not so much the way I conceive my art, but in some themes and issues I’ve depicted in the past three or four years. In 2009 I became interested in finance and the current global economy. If I had been spending more time in Havana than in Vancouver, that probably wouldn´t have happened. Looking at the world from that perspective has been a learning process, from which some of the works exhibited in The Journey (Talking Walls) emerged.

But you keep exhibiting your art in Cuba.

This is the environment in which I was formed and trained. Despite the fact that by now I’ve done many things outside of Cuba, I still think there is an audience here that, more than anywhere else, can understand my ideas. In this country, too, there are important cultural and visual arts institutions that I respect so much, among them the Office of the Historian of the City of Havana, Factoría Habana, Galería Habana, and others. Many friends and colleagues live here. I’ve never stopped feeling Cuban.

What encourages you most to create: reading a book of art theory, international news, or personal experiences?

First, life itself. Creating is a necessity; when I’m satisfied with what I do, it gives me pleasure. Developments in the world motivate me, as well as also reflections on personal, intimate issues, which can be shared by other human beings: our existence from the physical point of view, and how that connects with the spiritual; the nation and its history, its geography, its social character; the latest news on the market economy, plus film, literature … I think my art feeds more on life than on theory, although it’s good to know about theories too.

Do you spend many hours at work?

I could use my time better. The problem is that my schedule is a little weird. I like working at night and early morning but can’t always do this, because I sometimes have to get up early to fulfill other obligations. I think that an artist committed to his work never rests, when you’re not creating the work itself, you’re thinking about what and how to do it. To write a text, I have to research, read about it first. I funnel my energy into this work, not to mention family and social obligations.

In 1989, in the Castillo de la Real Fuerza in Old Havana, I opened a solo exhibition called Yo lo que quiero es ser feliz (What I Want is to be Happy). It was about the essence of happiness, which goes beyond the fact of being an artist and having what is sometimes known as a success. I was trying to say that life, happiness in general, are more important than art. But in the end, as a personal problem—you can see it, if you like, as an occupational deviation—it’s linked with who I am, since I give so much time to the art that has been, for four decades, one of the centers of my life.