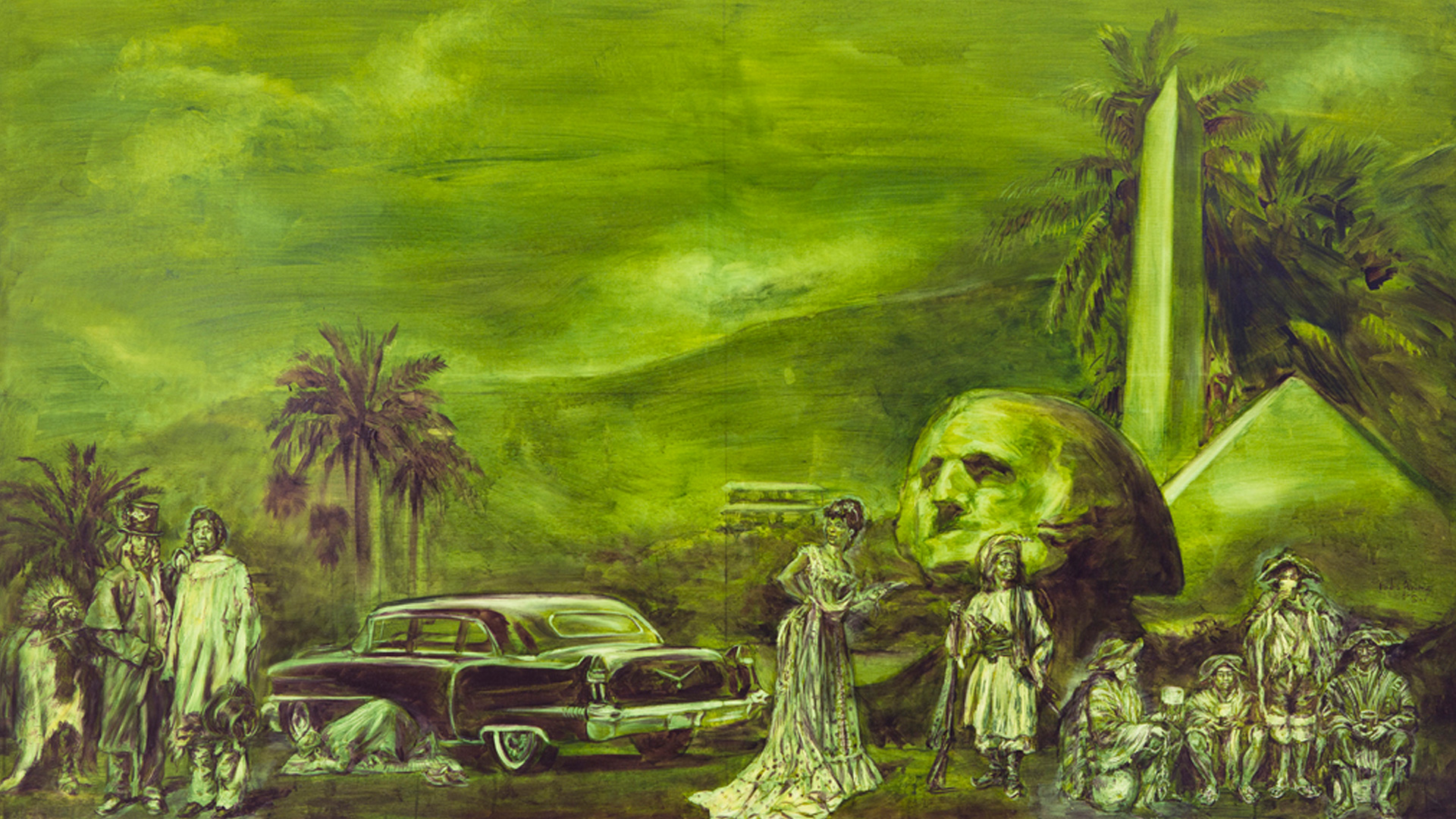 Is contemporary Cuban art fixated on a handful of familiar icons that represent “lo cubanidad”? Is it taboo to depict the “historic leaders” of the Revolution in artistic practice? Does a current reading of “lo cubanidad” demand new symbols—or any symbols at all? At The 8th Floor art space in New York City, the exhibition Waiting for the Idols to Fall explores these questions. Orlando Hernández, the show’s Havana-based co-curator (with Rachel Weingeist), shares his thought-provoking exhibition essay withCuban Art News.

No one cares about the little things. About all the seemingly trivial, insignificant things; the little people and common, run-of-the-mill things, without renown, fame, or luster. It seems that only that which has become an icon, a fetish, an idol has any importance, whether it be in religion, sports, art, or politics. Something or someone that unfailingly provokes applause, that ignites our admiration, reverence, devotion. This is how our varied, manifold reality is reduced to a few outstanding examples. All the rest (the 99%) becomes but accessory, extra, filler.

The only things which attract the general attention are what have been already judged as valuable and prestigious; that which a series of hidden and often loaded machinations of promotion and self-promotion have transformed into a paradigm or model: The political leader that emerges out of the anonymous multitude thanks to his demagogically convincing gift of speech or to a well-financed electoral campaign. The commercial brand that overshadows its competition by having designed ads of the most attractive and insistent quality, regardless of the quality of the product itself. The athlete who has achieved a new world record (at least for the moment) until another better athlete breaks it the following day. The work of art that has been able get in all the biennials, all the coveted museums, and is copied as a masterwork in books, magazines, catalogs, and picture postcards, while other equally attractive works remain forever in shadow, in anonymity, like the artists who created them. And while we’re at it, the God of those few religions whose believers’ proselytizing zeal has been the most successful.

What happens to everyone else? What happens with the rest? Of what use is such a reductive tradition that values but a fragment of reality, however relevant it might be, or seem to be?

Cuban visual art of the last few decades has fixed on a group of icons that undoubtedly contains a certain capacity to represent us as a social, cultural, and human collective, while setting aside the inevitable clashes and dissidences: the map of Cuba, the Cuban flag, palm trees, the boats and rafts of emigration, a few kitsch elements of our popular culture. The image of the Morro castle, the Malecón, the ruins of Havana, José Martí, Che, la Virgen de la Caridad del Cobre, San Lázaro. And the exoticized objects and ritualistic symbols of the Afro-Cuban religions of Palo Monte, Abakuá, Santería and Ifá, among others.

Some great icons—especially the so-called “historic leaders” of the Revolution—were acclaimed as idols at one time and have since been amply represented by photojournalism and documentary films. But their images have not been abundant in Cuban art. Images of these iconic revolutionary characters have suffered a kind of prohibition—much as the Muslim faithful are prohibited from creating “graven images” of the prophet Muhammad, or of any human or animal figure—a taboo that very few Cuban artists on the island are unaware of or have dared to violate. José Ángel Toirac has been the Cuban artist who has most frequently used such embarrassing icons in his work in the sharpest and most original ways. Other artists have employed similar concepts, labels, and epithets, such as the ones inscribed in the work of José Angel Vincench. Words such as “Gusano” (Worm) and “Escoria” (“Scum”) have become frozen in the vocabulary of a sector of Cuban society to refer to the “antiheroes,” to those deemed as politically marginal from the perspective of those who wield political power.

Looking at the issue in a more drastic, radical way, we are dealing in many cases with old icons, with icons pertaining to the “third age;” images that have begun to lack esteem perhaps, to lose some of the vitality and virtue that they once had in abundance a half-century ago when the “repetitions” of Che or Martí created by Raúl Martínez were a faithful reflection of our epic hopefulness, which reached their apotheosis in works like 15 repetitions of Martí from 1966.

Some icons, of course, have never lost their symbolic power, but Cuban art will have to include in its repertory many other images if it aims to represent what we imagine as “lo cubano” in its full measure. “The Cuban” is not a static or stagnant condition, but just the opposite. Cuban art will have to expand its iconographic panorama if it aims to “illustrate” that which we have always put up on high as a shield, as a coat of arms that identifies and differentiates us, or as a talisman that protects us wherever we find ourselves, whether in Havana, Madrid, Paris, New York, or Miami.

How to represent “lo cubano” without resorting to some version or variation on the same old icons? The new generation of Cuban artists has not considered this question worthy of attention. They have not even posed it as a dilemma. Simply put, they have moved on. Is this preoccupation with representing Cuban cultural identity and “lo cubano” in art a thing of the past, an old-fashioned matter? Is there a need to represent something, reaffirm something, cling to something in order to continue being Cuban? It seems that simply being Cuban is not enough.

We know very well that we are much more than the short list of images mentioned above; that lo cubano is made up of much more and that, at times, these elements are only visible internally as an emotion, a gesture, an attitude, not always identifiable as a surface image. What happens, then, with our pre-established value patterns when an icon so emblematic of North American culture, of New York culture, is suddenly transformed into a symbolic object by a Cuban artist, as in the case of Alexandre Arrechea’s“attractive rolled up skyscrapers,” or those other skyscrapers built out of thousands of fish hooks by Yoan Capote? Is New York a Cuban city? Are Carlos Quintana’s Buddhas Cuban?

Can the images of non-Cuban ritual objects and deities be Cuban? That is, can the Native American, Aztec, Amazonian, and African images painted and drawn by José Bedia throughout his career be Cuban? Are Pedro Álvarez’s “Dollarscapes” Cuban? What of Clara Morera’s symbolic deconstruction of those same famed greenbacks? Let’s focus on these examples. Is it not a paradox that the “Yankee Dollar”—the mere possession of which was a punishable crime for many years in Cuba—has been transformed into an icon capable of representing “lo cubano” up to a certain point? Is not Kadir López’s worn and apparently nostalgic Shell sign Cuban, despite the fact that it’s been years since such a brand of gasoline has fired a single engine on our island? There’s no scarcity of such examples.

Given these circumstances, we have to ask ourselves why do we feel the need to “mark” our national territory so emphatically—as dogs often do—with a handful of provincial if universally recognizable signs? In the end, we have already seen that just about any sign or symbol can serve this purpose. It matters little if we change our fur or appearance, as is the case in the mysterious geo-political metamorphoses that take place in the maps of Ibrahim Miranda or in the giant cityscapes of Douglas Pérez that somehow manage to be both colonial and futuristic at the same time.

In the end, we are always the same. Our image of Cuba has grown, diversified, gradually becoming more complex and less predictable. It matters not whether we show our face or a mask; whether we put on a laugh or a frown, a gesture of indifference or meanness. We could even turn into headless horsemen, with all our markers of identity scratched out, erased. Even then we would continue being the same: Cubans.

Like society, art generally shifts back and forth between idolatry and iconoclasm. Adoring and destroying idols in order to live, to move forward. (What else are idols for if we can’t throw them into the fire every now and then?) A 3D animation by Fernando Rodríguez entitled Mandarria y Matracajuxtaposes the two extremes of this supposed face-off (love-hate, adoration-destruction) with intelligence and humor by way of an imaginary stroll through the history of contemporary Cuban art. With this work, Rodríguez employs a rarely used creative format to celebrate the most emblematic art and artists of the 1980s and 1990s, while simultaneously and affectionately poking fun at them. This shows that it is possible (and perhaps desirable) to both admire and satirize, or even openly mock the past with the aim of keeping our distance from its gravitational pull, its dead weight.

We passively await the fall of the same aged idols that we unwittingly and mechanically reinforce as the very image of the nation. Doubtlessly, this is the choice many people make. Still, it is a melancholy and pathetic one. Such a choice is not likely to insure any future freedom either for Cuban art or for us as a society. In these new times, we are in desperate need of new idols, which will inevitably appear. Or perhaps there is no need for any idols at all.

Waiting for the Idols to Fall is on view at The 8th Floor in New York City through March 22.