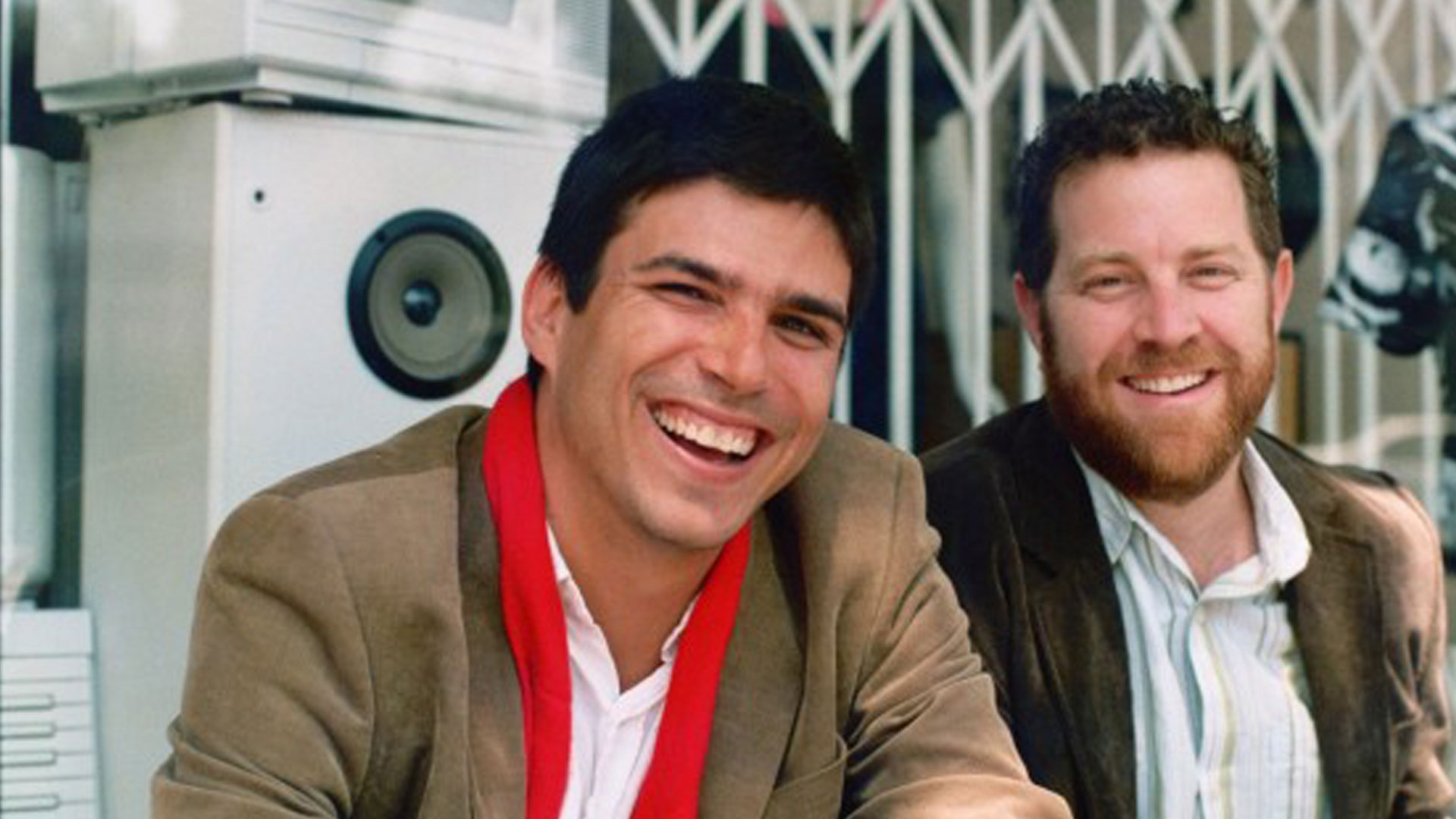 You may not know his name, but if you’ve been to the movies in the past 40 years, you’ve seen his work. Cuban-American designer and animator Pablo Ferro (b. 1935, Antilla, Oriente Province) created the opening title sequences and trailers for dozens of award-winning movies, including Dr. Strangelove, A Clockwork Orange, The Thomas Crown Affair, Harold and Maude, and Good Will Hunting, among others. Director Richard Goldgewicht (b. 1975, Rio de Janeiro) emerged from the Brazilian rain forest to speak with Cuban Art News about Pablo, his recently completed film profile of the elusive, multitalented Mr. Ferro.

Who is Pablo Ferro?

He’s an amazing artist, a Cuban immigrant, the American dream—maybe the upside-down American dream, as the movie shows. He’s the ultimate unknown artist whom people want to be around, to grab his wisdom.

How did you meet Pablo? Did you immediately see him as the subject of a film?

I interviewed him originally for a pilot for a TV show that never got picked up. The segment I did on Pablo turned out well and got a good response. It was shown at festivals and at the Smithsonian Museum. I kept it in mind when I wanted to make my first feature film: I thought Pablo would make a good subject. I realized I was just scratching the surface in the short; there was more to the man, a lot of mystery. Pablo is a very private man and it took a lot of research to get to the heart of his story. He’s very elusive; people would describe him in very different ways. He’s almost like a Zelig character. He’s also a comedian.

You’ve chosen an unusual approach to the typical “life and work of the artist” documentary, with the use of animation to illustrate some of the anecdotes and scenes from Pablo’s life, as well as interviews with Pablo himself, with family members, and with Hollywood personalities who know him and worked with him. Was this your original concept, or did it evolve as you developed the project?

It grew organically out of the process, perhaps because Pablo is an animator and designer. In interviewing his friends from the 1960s in New York and hearing about that period, it seemed a shame not to be there. I figured I should try to bring that period back to life. Animation would be an interesting way to evoke the allure of the times and show the magic, the psychedelica. It seemed to be the solution, but I knew nothing about animation. Figuring out how to do it was a challenge, and I had to do a lot of growing up in the process.

How did the animation elements develop? Aside from yourself, who were the members of the core creative team, and what roles did they play?

It was a long journey. By the time I was delivering the movie, when Shoreline Entertainment came in with finishing funds, I was still trying different ways to finish it. I had interviewed animators from all over the world. I mean that—I spoke with companies from maybe twelve different countries. At one point I had created complete animatics for the film. Also the script was quite different. Then I realized I needed to simplify the movie. I got lost in the world of Pablo Ferro, in a sense. By the time I reached that conclusion, it was simple, as I had done so much pre-visualization.

Then I found a young Turkish animator, Nurbanu Asena. She was based in New York and had a crew in Istanbul. We worked via Skype and email. I’ve never met her in person. It became a matter of trust, and being able to direct from a distance. I was lucky to find someone who had a very interesting touch and who could deliver the movie on budget. On the other side, I had a couple of Latin designers, born in Colombia. After searching the world, I found this couple who live a couple of streets from me in Los Angeles: Luis Freddy Morales and Marcela Perdomo. They loved the project and did all the motion graphic and design work, along with Juan Camilo Fonnegra. So I had these two different crews, for the character animation and for motion graphics. Lior Ron composed the original score.

You’ve assembled an impressive roster of Hollywood personalities to speak about Pablo. Was it difficult to get their cooperation?

It took some patience to accommodate their schedules, and some charm. On the whole, this was the easiest part, getting together with Pablo’s friends to reminisce about their memories. I’m 37 now and when I started this project I was 31. I was surprised at how open people were in front of the camera. I learned a lot of interesting American culture from the 1960s and ’70s. In the beginning Pablo gave me a handwritten list of contacts. I was expecting a few names and he gave me pages and pages of celebrities—the shoe box of a man’s memories. Some of the people were dead, some of the phone numbers were old, some didn’t want to talk about him—there were lots of different responses. But in the end I think I assembled a good lineup.

How did you select Jeff Bridges to narrate the film? What is his connection to Pablo?

I interviewed Jeff when he was shooting in Santa Barbara. I decided he would serve the film in a stronger way if he narrated it, working with the script we had written. He was open to it, and it was an easy process. It was very natural and very quick: the recording only took about 2-3 hours. Jeff had the connection to the marijuana culture (The Big Lebowski), and he knew Pablo from Hal Ashby films. Ashby was very important in Jeff’s career and in Pablo’s, so Jeff was a good fit. He has been very helpful and continues to be supportive about promoting the film.

Was Pablo involved in conceiving and shaping the film?

Not exactly. I would get calls from him with lost memories, and there were things he felt should be included, but there was very little he objected to. I wanted to be sure he felt comfortable. But it isn’t his creative vision for the film. The only original Pablo art is the little dancing self-portrait figure.

What does he think of the finished film?

Pablo loves the film. It was a hard-earned process. I took some liberties in trying to fashion the story and I stepped on his toes a few times. It was a long journey. But Pablo fully supports it. We’re still figuring out how and where to premiere it, and he will be there.

What would you say were the biggest challenges in presenting a subject like Pablo Ferro?

This was my first film, so that was a challenge in its own right, building credibility. I talked too much about the film too early. It’s an ode to an unknown artist; it celebrates the desire to keep being creative no matter what. But it was challenging to raise money for a film on an unknown artist by an unknown filmmaker. Industry people said they would like to watch the movie, but they didn’t want to finance it. It was an uphill battle, a crap shoot. I was working with a producer, Jeremy Goldscheider, who had been my producing partner for years and who also was not well-known in the industry. And Pablo himself was not in his glory days; he was living in a garage and looking for work. The big event was seeing him making business cards. So he wasn’t as big a draw [to funders] as he would have been in his heyday.

Funding and producing an independent film is rarely easy. How long did it take you to make the film, start to finish?

It took four or five years, and finishing the final version took another year. It’s much more experimental. The original concept was much darker, exploring other aspects of Pablo’s life. The finished film celebrates his life and art.

Knowing Pablo as you do, how would you describe his Cuban-ness, his cubanidad? How important would you say that was in forming his character? His talent?

From an aesthetic sense, I don’t know. From a character standpoint, the fact that he arrived in New York in the 1940s as a young Latino immigrant with his family, then had to work to support his family after his father left them—it’s a survival story. I haven’t been able to track the Cuban influence in his art. He was always interested in animation. He’s a collage artist—making sense of random footage—and a Pop artist, repurposing elements; he can readily re-envision the beginning of a movie. I can’t say how his Cuban heritage comes into play.

In the movie, we learn that Pablo and his wife Susan went to Cuba for their wedding in 1957. As far as you know, what was Pablo’s relationship with the island after he left? Has he been back in recent years?

He hasn’t been back recently. I dream of going to Cuba with Pablo. We’d like to show the film there, maybe at the Havana Film Festival.

Where is the film in terms of distribution? Where will we be able to see Pablo in 2013?

We’re just beginning to get the film out there. The film premiered at the Rotterdam International Film Festival, but hasn’t had a U.S premiere as yet. It will be shown at the Jameson Dublin (Ireland) Film Festival in February. We’re working on premieres in Los Angeles and New York. It’s very much a New York story: a lot of his life was lived in New York before relocating to Los Angeles.

Good luck with the rollout of the film. Thanks so much for your time, and congratulations on an outstanding documentary.

Here are two videos for Pablo: first, the film’s official trailer, which gives a good sense of the animation; and an earlier trailer from 2007, which conveys the scope of Ferro’s impact on movie titles and editing.