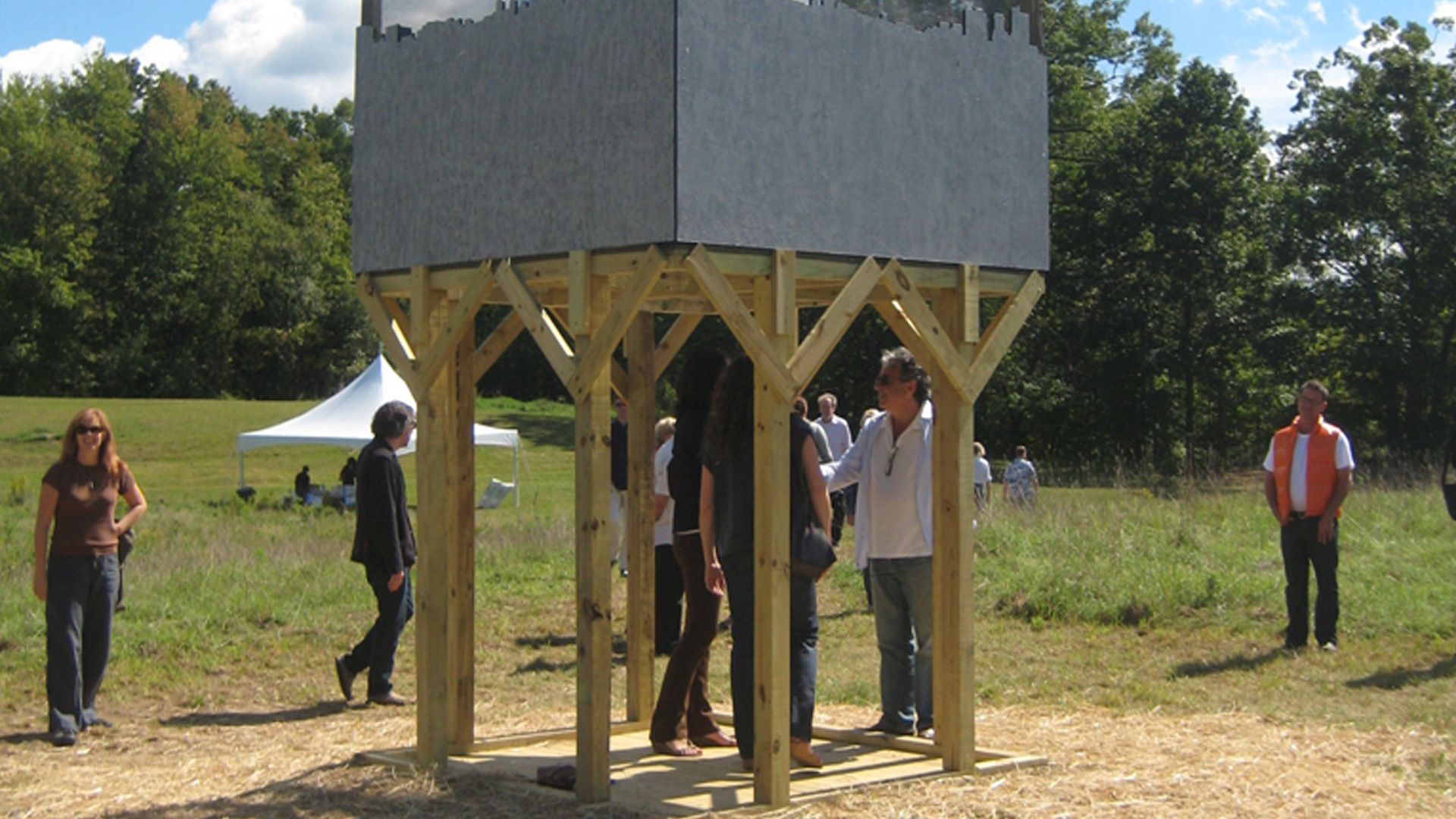 A group of site-specific installations, a lecture by a renowned Havana restoration architect, a double presentation by two young Cuban architects, and the return of a critically acclaimed documentary gave the New York cultural season a distinctly architectural (and Cuban) slant.

The exhibition was co-curated by Rachel Perera Weingeist and Peter Franck, director of Architecture Omi, with the collaboration of Ricardo Porro, the principal architect behind the internationally acclaimed educational complex now known as the Instuto Superior de Artes (ISA). The idea originated with Weingeist, who, as curator and advisor to a noted private collection, had seen the kind of opportunities available to Cuban artists for creative residencies in the U.S. and elsewhere. “Architects in Cuba have the same high level of training as artists, yet the architects have no opportunities to travel,” she explained in her remarks at the opening celebration. “We wanted to bring architects here to have the same freedom and openness and opportunity to dream big.”

Porro, Weingeist and Franck identified two young Havana architects, Yilena Feitó Echarri and Yoandy Rizo Fiallo, who were awarded six-week residencies at the Vermont Studio Center for the development of the Architecture Omi projects. Neither had previously traveled outside Cuba. In addition to Feitó and Rizo, Skyline Adrift included works by two leading Cuban artists, Alexandre Arrechea and Armando Mariño. All four created site-specific sculptures that remain on view at Architecture Omi through next May. (For more images, see the photo album on the Cuban Art News Facebook page.)

Feitó’s area of architectural expertise is historic restoration; she works with the Office of the Historian of Havana. Not surprisingly, her project, Havana in Gray, addresses the crumbling state of the city’s architecture—or as she put it, “the degradation of the built scenario.” At first glance, Havana in Graylooks a bit like a freestanding tree-house: a platform on wooden pillars standing 10 or more feet in the air, its sides depicting views of the Havana skyline silhouetted in gray. The silhouetted views, she explained, represents the city’s inexorable “march toward uninhabitability.” At the same time, the structure’s sturdy wooden underpinnings represents “the Cuban people as a social factor, carrying on their shoulders a country that degrades day by day, but with the deep desire to help the society.”

Yoandy Rizo took a more personal approach. Tucked into a wooded glade, Nest: Points of View is an airy sphere bristling with wooden projections—a reflection of Rizo’s first-time experiences in the U.S. “I feel like I’m home right now,” he told the audience at Omi, “and my piece is about that. Before I came here, I felt very bad toward the United States, because I learned that in school: you are my enemy. But right now, you are my family.” Interpreting his piece, he explained that “It’s about point of view. When you’re outside, you see something aggressive, something uncomfortable.” He came to realize that some Americans saw Cuba much the same way he had been seeing the U.S. “From here, sometimes you think Cuba is an aggressive country. But it’s my home, my nest.”

For Alexandre Arrechea, the Omi International Art Center struck him as an open, welcoming place. That was the initial inspiration for Door in the Desert, which hoists an airy frame-and-panel door, its panels removed, in place of a flag. In some way, he said, the piece “tries to change the meaning of what is a flag, and to turn it into something that is more open—some other type of symbol to represent a nation.” The bike at the base of the flagpole signifies an outdoor sculpture that remains open, always accessible, “a point of departure to finishe the trip in some way—to keep that circle open.”

A small red house in the middle of a field, Armando Mariño’s Exiled reflects the artist’s own history of moving from country to country, as well as the pleasure of finally coming to rest in a new place, and his love of the classic red barns of upstate New York where he now lives. With its many human legs poised to send the house into motion, Exiled also references his 2003 sculpture La Patera, a similarly powered classic American car, which was created for the Havana Biennial that year. Noting that his first trip outside Cuba was to Omi for an artist’s residency in 1997, Mariño recalled seeing the Omi sculpture fields and wishing he could have a sculpture installed there. “And I got it!” he exclaimed to warm applause. “Yes!”

On Thursday, September 20, architects Rizo and Feitó gave presentations about their Architecture Omi projects to an enthusiastic audience of New Yorkers at The 8th Floor gallery. Two days earlier, The 8th Floor hosted a distinguished architectural visitor: Daniel Taboada, senior architect in the Office of the Historian of Havana. Taboada gave a lovingly detailed talk about some of the restoration projects he’s overseen in his decades of work with the Office of the Historian, including such important landmarks as the Casa de la Obra Pía, the Convent of Santa Clara, and the hereditary home of the Condes de San Fernando de Peñalver, currently the Wifredo Lam Center. Taboada’s personal architectural passion, Cuba’s vernacular architecture, offered an interesting way of approaching Feitó and Rizo’s pieces at Omi.

On Friday, September 21, and Sunday, September 23, the widely acclaimed documentary Unfinished Spaces made a return visit to the Film Society of Lincoln Center. Screened in a five-day tribute to the Montreal International Festival of Films on Art (FIFA)—where it won the prize for Best Reportage—the film gathered another round of appreciative audiences, as it continues an autumn tour that includes screenings in New Orleans and Tampa and a premiere in Puerto Rico.