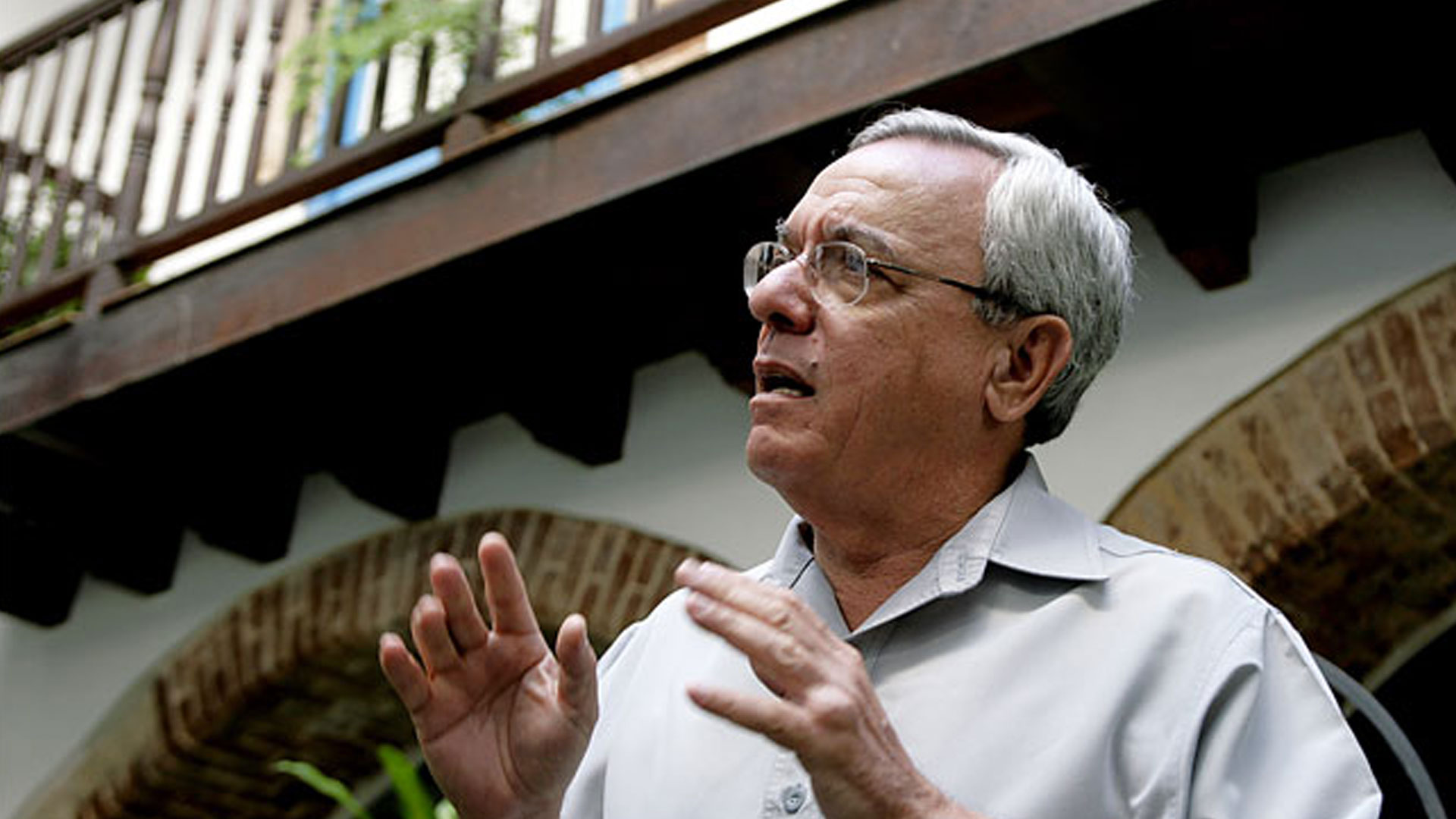 He holds the titles of Historian of Havana and President of the National Commission of Monuments, but over the course of his career Dr. Eusebio Leal Spengler (b. Havana, 1942) has been described in other terms: as an intellectual, a parliamentarian, a “firecracker,” and, early on—when he lay down in the path of trucks to prevent them from paving over a historic street—a madman. Kent Barwick, president emeritus of the Municipal Arts Society and former chair of New York’s Landmarks Preservation Commission, places Leal in an international pantheon of champions of cities that includes André Malraux in Paris, and Jacqueline Kennedy Onassis and Jane Jacobs in New York City.

During the month of May, Dr. Leal visited the United States. As a United Nations Goodwill Ambassador, he was received at U.N. headquarters where he met with Secretary General Ban Ki-Moon and briefed officials on the status of restoration work in Old Havana. Reviving and restoring the historic center of the city of Havana has constituted a large part of Dr. Leal’s lifework, and in 1982 UNESCO declared the district a World Heritage Site. He also gave a talk to an overflowing auditorium at the New York Public Library. Moving on to Washington, DC, he spoke at the Brookings Institution and participated in a discussion on “Balancing Preservation and Transformation in Cuba.” In both cities, he toured museums and cultural institutions, where he was warmly received.

In his talk at the New York Public Library, Dr. Leal presented an overview of the restoration work accomplished in Old Havana. Illustrating his remarks with impressive before and after pictures of palacios, churches, and other historic structures that have been restored over the past thirty years, he traced the history of the city and showed the deterioration caused by the ravages of time and the destructive force of a tropical hurricane in 1981. Some of the storm-damaged buildings have been restored and are now used as schools. Others have been reimagined as mixed-use facilities that include apartments, shops, restaurants, and workrooms, such as one for restoring musical instruments.

More than 180 structures have been restored to date. Leal is frequently quoted as saying that “Man thinks as he lives, and lives as he thinks.” For him, beauty is important, and people are most important of all. Cities must be vital, functional spaces. The restored Old Havana is not a theme park: real people live and work there.

As with most preservation efforts, there has been a struggle between those who want to restore and those who want to tear down and build anew. The beautiful plaza that is at the heart of Old Havana had become a parking lot over time. Leal noted that getting rid of the cars to restore a pedestrian plaza was like St. George battling dragons.

During the Special Period in Cuba following the collapse of the Soviet Union, government resources were scarce and it was necessary to find new means to continue the work of restoration. The Office of the Historian was given unusual authority to generate its own revenue. Beginning in the early 1990s with a budget of $1 million from the government, they restored an old hotel, the Ambos Mundos (where Ernest Hemingway once stayed), as well as several restaurants and a few houses. This enterprise has now grown to include 16 hotels, more restaurants, museums, a radio station, theaters, and other amenities that encourage tourism, as well as facilities for Habaneros: apartments, schools, health clinics, centers for disabled children and for seniors. Revenues in 2011 topped $120 million, with profits of $23 million that support the ongoing work of restoration. The Historian’s Office guarantees interest-free bank loans for property owners to restore their buildings, which is preferable to the government buying and then abandoning them for lack of resources. Restoration has created thousands of jobs, provided housing, and encouraged the tourism that is essential for the Cuban economy.

Gracious, eloquent, dedicated, and determined, Dr. Eusebio Leal has won the appreciation of the Cuban people, as well as preservationists worldwide. He has written numerous books and articles and has lectured at prestigious institutions throughout South America and Europe. He has earned a long list of national and international honors and prizes. He has also hosted a television show called “Andar la Habana” (Walking Havana).

Dr. Leal is proud of what his office has accomplished, but is keenly aware of how much there is still to do, simply to complete the restoration of Old Havana. A practicing Christian, he peppers his talks with biblical allusions. When asked who might succeed him if he were to retire, he noted that his collaborators include young architects, engineers, economists, lawyers—many of whom are women—perhaps, he said, it will be one of them. He observed that Moses led his people to the Promised Land but died before he could enter it. “Sometimes the disciples enter the Promised Land without the leader,” he concluded.