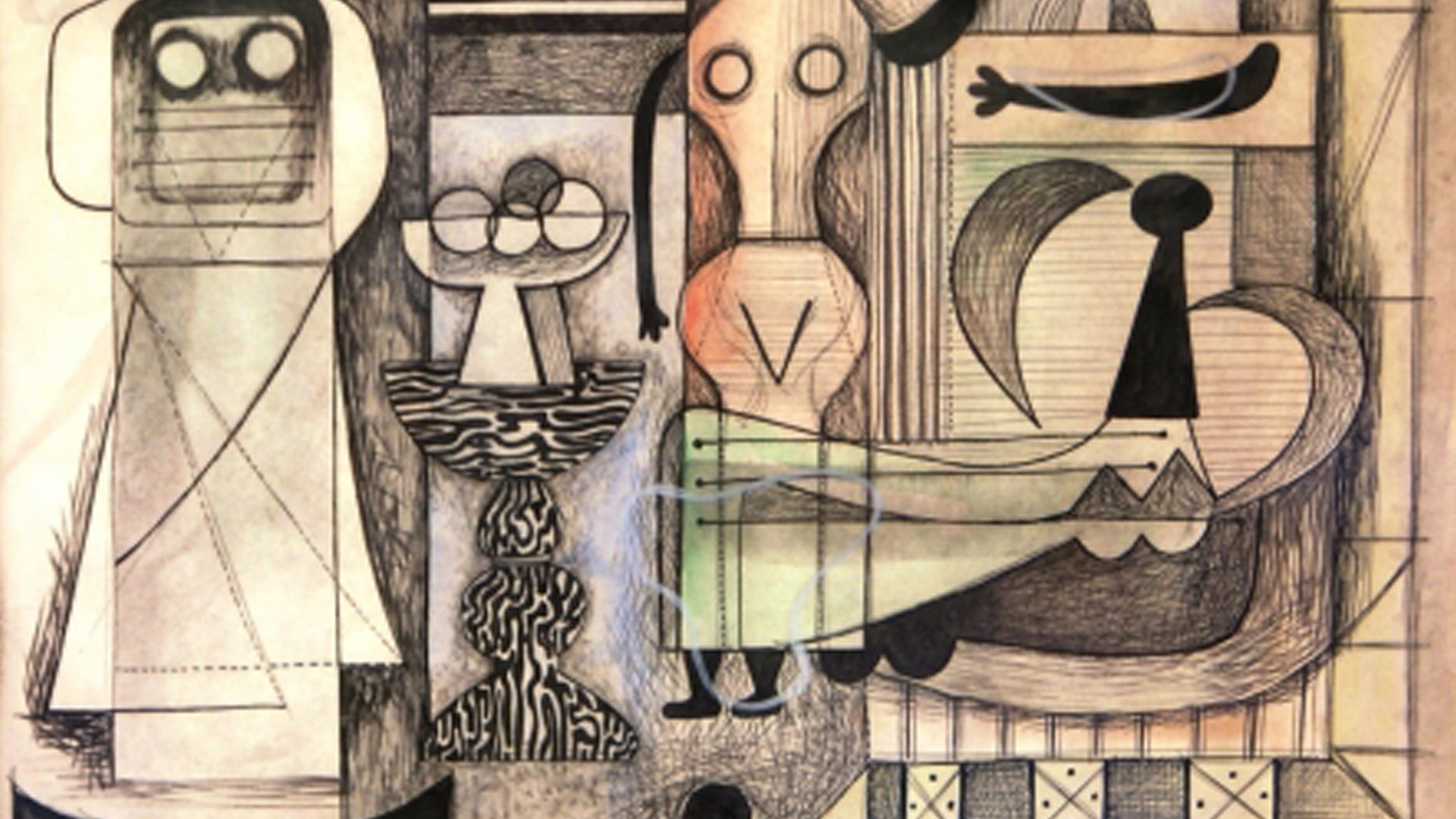 Along with its many exhibitions, performances, and other events, the 11th Habana Bienal also saw the launch of several books—among them, Mario Carreño: Selected Works / Obras Selectas 1936-1957 by collector, curator, historian, and gallerist Jesús Fernández Torna. In an email interview, Fernández Torna gives Cuban Art News readers a glimpse of the process involved in making the book, and the many experts on the island who contributed to it. (For photos of the book launch at the Museo Nacional de Bellas Artes, visit the Cuban Art News Facebook page.)

Tell us a bit about the book. What’s the concept behind it?

The book is basically a tribute to one of the great masters of Latin American and universal art in the last century. Our idea was to approach the evolution of Carreño’s artistic career and his journey as a human being as well as his role an emblem of Cuban avant-garde art.

I chose this particular period in Carreño’s career for several reasons. First, Cuban avant-garde art has been the main focus of my work as an art collector, historian, and dealer. I grew up in a unique atmosphere of art and culture, and at 18 started gradually studying the work of the great masters of Cuban avant-garde, such as, among others, Cundo Bermúdez, Amelia Peláez, Ángel Acosta de León, and José M. Mijares. This study encouraged my interest in 20th-century art in general, and Carreño’s in particular.

In addition, I chose that time frame because the great masters Carreño followed from an early age are largely the ones that have always interested me the most. In that sense, the work of figures such as Giotto, Andrea Mantegna, Rafaello Sanzio, Tiziano Vecellio, Amedeo Modigliani were important influences for him. To this we have to add his discovery in 1936 of the magnificent Mexican muralists Diego Rivera, Clemente Orozco, Rufino Tamayo and David Alfaros Siqueiros. It was Siqueiros who taught him his Duco technique, and in 1943 Carreño used it in his famous works Corte de Caña (Sugar Cane Cutdown), Fuego en el Batey (Fire at the Batey), Danza Afrocubana (Afro-Cuban Dance), La Pescadora (Fisherwoman), and Tocador de Guitarra (Guitar Player), among others.

The book highlights the 1940s because this decade marks a time of sweeping progress for Carreño. In 1944, New York’s Musem of Modern Art acquired his piece El Ciclón (The Hurricane, 1941), for its permanent collection. That same year, MoMA opened the exhibition Modern Cuban Painters, organized and curated by José Gómez Sicre and Maria Luisa Gomez Mena, which showcased more than 80 works by 13 renowned masters of Cuban art, including Carreño, Fidelio Ponce, Amelia Peláez, Carlos Enríquez, and Cundo Bermúdez.

When did the idea for the book first occur to you?

I’d been planning to write a book about Carreño practically since the end of my adolescence, but it was only 15 years ago that I started to do in-depth research of his life and works. By August 2011 my inquiries were almost finished, so I traveled to the island to complete the ones that required a more personal approach.

Tell us a bit about the contributing writers, and why they were chosen for their specific topics.

My research brought me close to the island’s critics, scholars, curators and specialists who have focused most profoundly on Carreño’s life and works. Later, during my trips to Havana to conclude my research, I got to know these people better.

That’s why, in addition to my own writing, I wanted to include other interesting texts about the artist’s Cuban decades. These essays were written by Luz Merino Acosta, technical assistant director of the Museo Nacional de Bellas Artes (MNBA) and professor of the College of Arts and Letters of the University of Havana, by Roberto Cobas Amate, the MNBA curator of Cuban avant-garde art, and by Elsa Vega Dopico, another MBNA specialist in the subject.

The title of the book refers to “selected works.” Who selected the works, and what were the criteria?

The selection was made mainly by myself, based on the criteria expressed in the texts included in the book. In making the final definitive selection we took into account the opinions of the specialists at the Museo Nacional de Bellas Artes, above all those who contributed to the book.

The full-color images illustrate the various creative periods of Carreño’s work during his Cuban years, before he went to live permanently in Chile and another valuable chapter of his artistic development began.

For the cover, I always wanted to reproduce one of the most important pieces in his entire body of work: El Nacimiento de las Naciones Americanas (The Birth of the American Nations), painted in New York in 1940. And so it was done.

In the book you’re described as a curator, historian, and art collector. How did these three roles come into play in creating this volume?

To see a work of art on the wall of an institution, or its reproduction in the pages of a book, is not the same as having it as part of your everyday life at home, establishing with it the kind of personal bond that you develop with your own things, the stuff of your life. This is a terrific advantage that my being a collector of Cuban avant-garde art, and in particular of Mario Carreño’s works, brought to the making of this book.

It’s also why my being a curator, an art historian, and an art collector were essential for conceiving the book, for navigating the currents of the publishing world, and even for the book’s design, which tries to be didactic in the way texts and pictures are linked together. Our intention was never to make a catalogue, but rather a well-illustrated book that allows the reader to go over the different periods of Carreño’s creation in a fun, instructive, and understandable way.

How about your role as an art dealer? What do you think that contributed to the process?

I’ve always been very particular in regards to art collections—not only my own, but all the ones I’ve been lucky enough to see. There’s a lot of vandalism: counterfeit art being sold and tawdry reproductions of pieces by great artists, both Latin American and worldwide.

For an art dealer to be truly respected at an international level, the trustworthiness of the art he or she sells is a fundamental premise of their work. It’s a very difficult endeavor nowadays, and one that needs time, financial resources, and considerable personal intuition that comes from experience, study, knowledge, and the relationships that one establishes with the art and the artists. As a dealer, I thoroughly vet the artist’s signature, the authenticity of the work’s provenance, and the quality of the brushstrokes. This approach also served as the axis of this book—as the security rules for selecting the works to be reproduced.

Is the book currently in distribution? Where can interested readers obtain a copy?

Yes, of course. People from all over the world who want to purchase it can do through the Internet, at Amazon.com. Also, it is currently being sold at the store of the Museo Nacional de Bellas Artes in Havana, and at our gallery, Torna & Prado Fine Art Collection, in Miami, Florida. Requests may be made directly or through our email addresses: torna@mariocarreno.com and info@pradoart.com.

Now that the book is published, what’s your next project?

The Museo Nacional de Bellas Artes in Havana is interested in working with us on other publications about Cuban avant-garde art, which will include texts written by me as well as by other specialists. Because, as I’ve said on other occasions, there are still many facets of the great Cuban artists of the mid-20th century that are yet to be studied.

Perhaps Mario Carreño: Selected Works | Obras Selectas , 1936-1957 will encourage the emergence of other works by Carreño that have been unknown up to now. That would be another reason to prepare other volumes.

For now, I am very pleased with the impact this book has had. On the island the national media dedicated a lot of space to it in their culture sections, while the art magazines included it in their new book sections.

It was a labor of many years, a period of intense creativity that was crowned by the two most important events of my life so far: the birth of my first child, Josecarlo, and the publication of my first book.