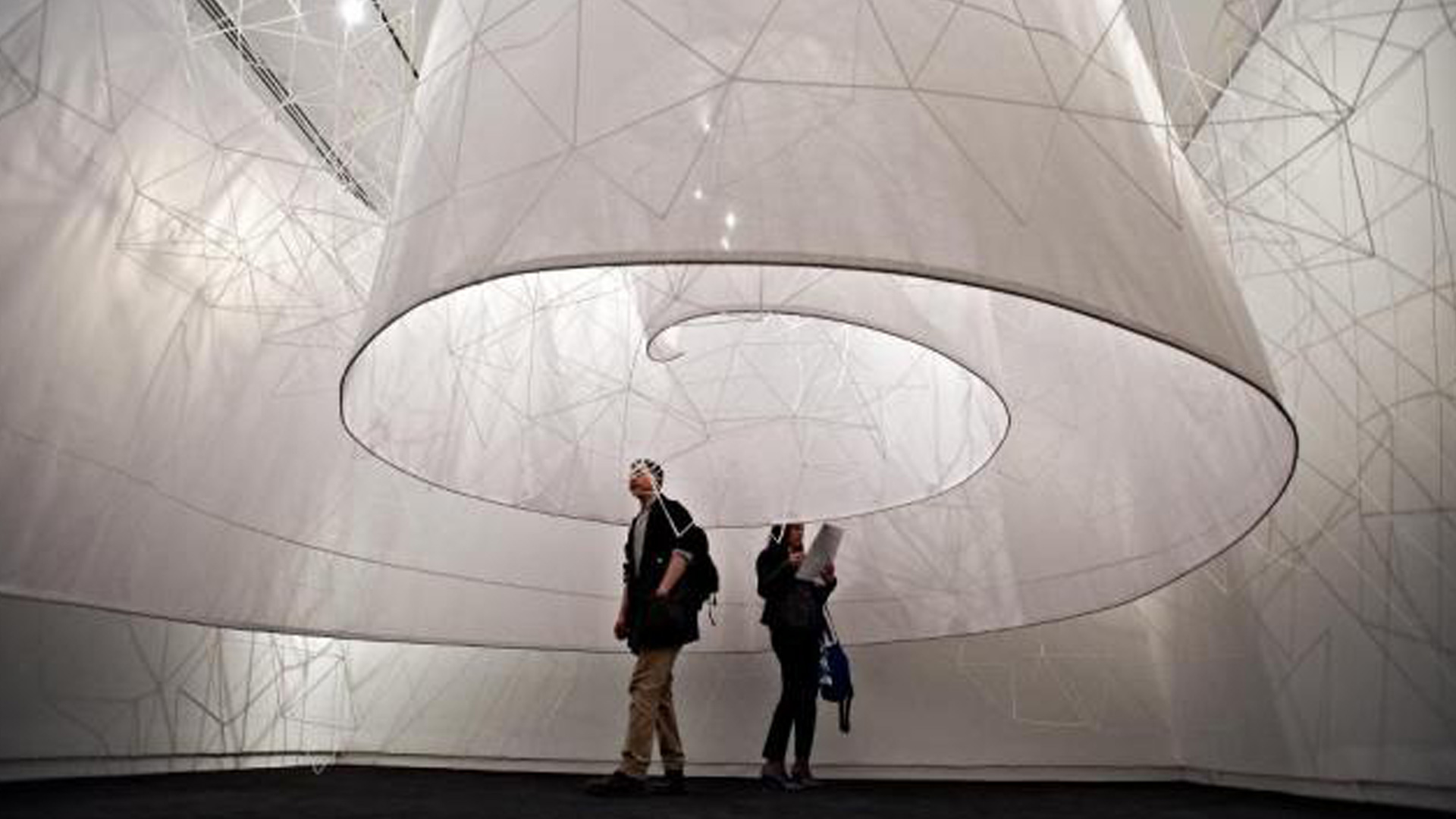 Abel Barroso in Madrid. Last week saw the opening of the artist’s first solo show in Spain, featuring an installation, eleven of his wooden “sculpture-objects”—including wryly philosophical games like Visa Monopoly and Wheel of Fortune—and a dozen ink drawings and collages. In addition to hosting the exhibition, the Michel Soskine gallery will present a selection of Barroso’s work at the international contemporary art fair Arco Madrid, which runs February 14-19.

Gustavo Acosta, too. Along with Arco Madrid, February 14 marks the opening of Gustavo Acosta’s first solo show in that city. At Raymaluz Art Gallery, the large-scale paintings and drawings in Duda (Doubt) portray a near-abstract urban vision that is almost photographic in its clarity. Though some compositions evoke vague impressions of Havana or Miami, all share a haunting sense of emptiness, timelessness—neither day nor night—and memory edged with nostalgia. The gallery is hosting a reception at 8 p.m. on Tuesday, February 14; the show runs through March 18.

Alejandro Aguilera in Atlanta. Heroes and inspirational figures whose achievements have helped shape contemporary life are among the subjects of About the Modern Spirit, Alejandro Aguilera’s retrospective at the High Museum of Art. Created between 1998 and 2011, the show’s 30 drawings reflect the artist’s skill with such media as crayon, tempera, and graphite, but also collage and in some cases coffee. Hung salon-style, in tight clusters, the installation offers an immersive look at Aguilera’s art. The exhibition runs February 18-May 20, with an opening reception on Thursday evening, February 16.

Castañeda in Miami. Last spring, Consuelo Castañeda unveiled Untitled (Homage to Gego) in her exhibition at New York’s Americas Society. More recently, the airy hanging spiral has been wintering in Miami, where it’s taken up residence at Hardcore Art Contemporary Space. A tribute to the pioneering Venezuelan geometric abstractionist Gertrude Goldschmidt, known as Gego, in its construction Castañeda’s work also references Fibonacci, Johannes Kepler, and Buckminster Fuller. A geometric overlay made of drinking straws reinterprets Gego’s Reticulárea, an installation she made for Americas Society in 1969. Untitled (Homage to Gego) remains at Hardcore Art through March 3.

Coming Soon: Fontanals-Cisneros Collection to the Bienal. As reported last week in the Wall Street Journal, Cuban-born collector Ella Fontanals-Cisneros is sending a selection of international contemporary artworks to the Museo Nacional de Bellas Artes for an exhibition timed to open with the Havana Bienal. The 85 works in Multiple Views: Selections from the Ella Fontanals-Cisneros Collectioninclude large-scale works such as Ai Weiwei’s installation piece Forever Bicycles (2003) and Olafur Eliasson’s sculpture Blue Double Kaleidoscope (2005). The collection is also strong in video, photography, and geometric abstraction, and Latin American artists are well represented. Among the videos is Ana Mendieta’s 1975 Corazón de Roca con Sangre (Rock Heart with Blood), an 8mm film of the artist fitting herself into a grave-like outline of her body carved into the earth. According to the Journal, performance artist Marina Abramovic will give a lecture at the museum in conjunction with the exhibition. Opens at the MNBA on May 12.