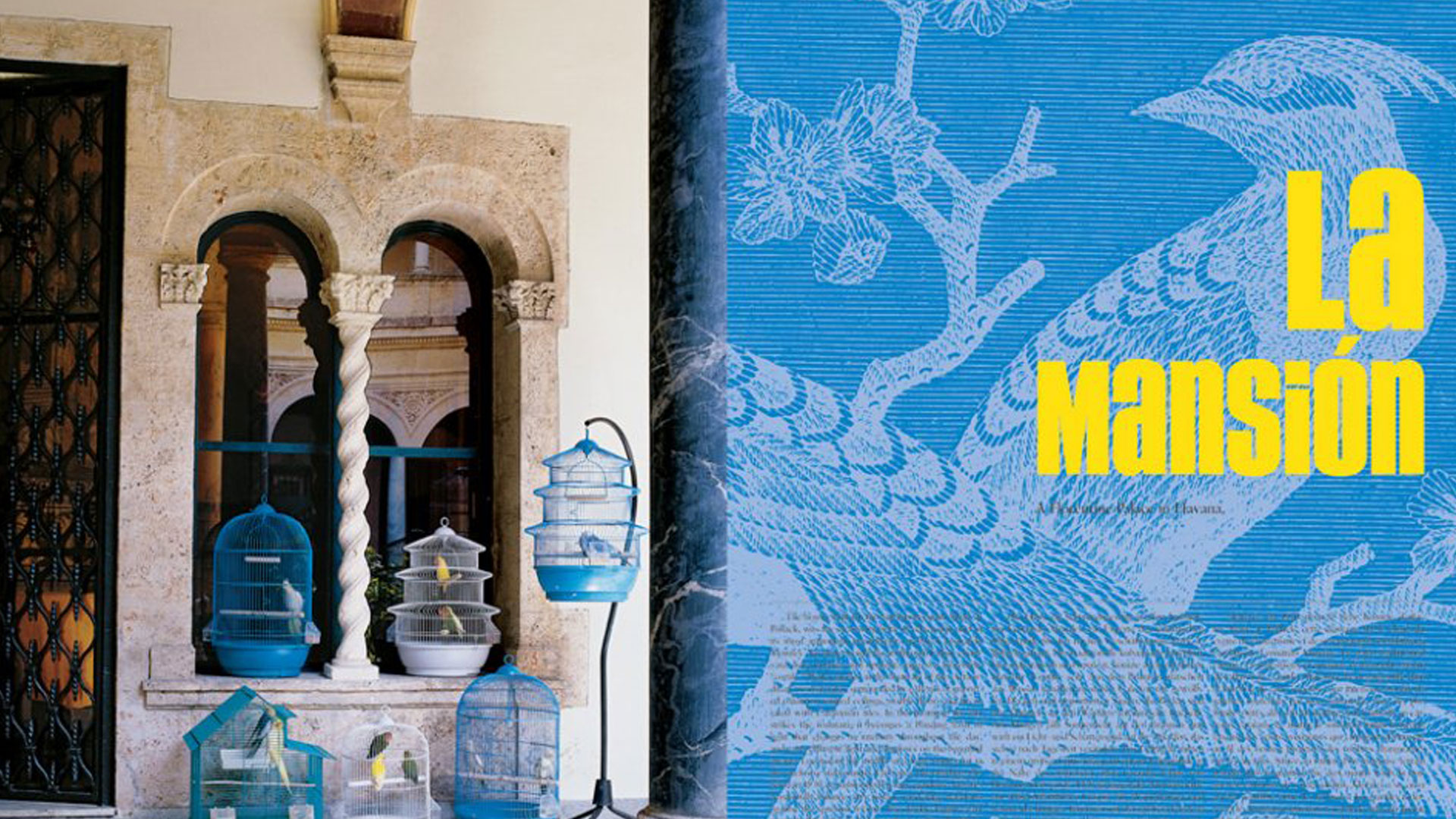 As he prepares for the 2012 Havana Charrette taking place later this month, Havana architect and urbanist Julio César Pérez paused to talk with Cuban Art News about the making of Inside Havana (Taschen, 2011), the recently published, Havana-only version of his 2005 book Inside Cuba, now out of print. Here, Pérez recalls his role in the book’s creation, how it came about, what he himself would have done differently, and why it remains such a vital testament to Cuban architectural history.

How were the houses and other buildings chosen for the book? Who chose them?

This story begins in 2005, when [the German publishing house] Taschen asked me to write Living in Cuba—that’s what it was originally called. Taschen had already made several others, like Living in Morocco, which they sent me to check the publication style.

I must say that I was honored to be selected, among several people from Cuba and abroad, who, like me, were invited to send written texts which would be revised by the publishing house. Then Taschen sent Italian photographer Gianni Basso to Cuba. In 2004 he had done a small book for Taschen (the diminutive is suitable in all senses of the term) called Havana Style. This book contains a group of his photos, which I immediately refused, as they follow a very restricted criterion, focusing on sleaze and denying the city’s architectural beauty. I should add that the book had plenty of gaps in the descriptions found in its footers, which in one of my trips to Europe I proposed to the editorial department that I correct, and they agreed. This background is necessary to understand why seven of the houses in Inside Havana were “far fetched.” Taschen wanted them to appear in the book because they had been already paid for and had to be used. This, along with a certain folklorist vision, in my opinion.

What criteria did you follow to select the buildings for the book?

When Gianni Basso gave me a copy of Havana Style, I categorically told him that I would not do a book that only showed the decadence of the place, but that I would very much support a project showing the enormous beauty of our architectural heritage, which is unique in many ways. I immediately let the publishers know about this—although they already knew the content of my proposal before the photographer came to Cuba.

Taschen asked only to include Hemingway-related sites and the Riviera Hotel, and asked me to select the rest. The limit was 18 locations. My criteria were based on architectural quality. After a month together, Basso was amazed at the amount of work we had done, as more than 60 locations had been shot. With this argument, I persuaded the book’s editor, Angelika Taschen, to do it as a ledger-sized volume, and the publisher agreed. So Inside Cuba was born, which shows not only Havana locations but buildings from Pinar del Rio, Varadero, Cienfuegos, Trinidad, Bayamo and Santiago de Cuba. Inside Havana is the result of a re-issue that focuses on Havana only, necessary since the printing of Inside Cuba had sold out after great international success.

What were you looking to communicate about Havana as an urban space? About the architecture of the city?

Havana is a city of unparalleled magic and poetry, of deep mysteries, of ineffable environments … with a heritage built over several centuries. This gives it the character of a Caribbean metropolis with a strong European influence—a city with a unique appeal arising from its built environment and the outgoing lifestyle of its inhabitants.

The book aims to refer to Architecture with a capital ‘A,’ as a kind of art, in a city where both public and private buildings coexist harmoniously—everything that makes up the urban landscape in its different settings. This puts Havana high on the international list of places with an outstanding and varied architecture and urbanism, due to the quality of its city spaces, sculptures, and traditional sense of good taste—now threatened by the kitsch that we see emerging in the book and in the artist Fuster´s excessive interventions in his neighborhood.

In Havana, we feel the presence of a very urban architecture, which means that, beyond discriminating between styles, the space has an intimate quality that makes people love it. This is what happens in Madrid, Barcelona or Seville, Rome or Naples, London or Paris, and even in New York or New Orleans. And this is what seems to be perceived by our sixth sense, which transcends any other quality. Despite the deterioration of some of its neighborhoods, the spirit of Havana survives with an everlasting celebration of its Architecture and Urbanism, connected to all these other cities of the world in an indelible way, but keeping its own identity.

The book has an interesting flow from one building to the next. Could you talk about the underlying principles that governed the order in which the buildings were presented?

It’s not just chronological. Chronology is a subtle aspect that allows us to order, to propose a schedule—a way of looking at history and the city. It allows us to appreciate the different influences and the presence and evolution of different architectural styles in the country, and the evolution of Havana from the planning standpoint with the presence of increasingly monumental and elegant buildings, something that characterizes not only the central areas but also its suburbs.

The fact of finding, at the beginning of the book, a stately home like the Obrapía House, showing its beautiful courtyard surrounded by spacious galleries, followed by the Palace of the Captains General—one of the most important and better-designed buildings in the country—and the Bodeguita del Medio with its bohemian atmosphere, the Ambos Mundos Hotel with Hemingway’s traces, and the Partagas cigar factory, suggests the intention of showing how buildings of different uses and scales are inserted into the city, its streets and blocks, along with houses and other buildings to create an extraordinary urban environment. From one building to another, it feels like a step to the next chapter, something new, with a different quality, but only after having enjoyed the previous one and have learned from it.

It seems that writing so expressively about each building might have been a challenge, knowing that your word count was short and your writing would be translated into three languages other than Spanish. What were you aiming for in your texts?

I wrote the book in English and it was a challenge for sure, because of the conciseness required in each text—even in this language that is more concrete than Spanish. The texts aimed to express the essential—what Hemingway was taught at the beginning of his journalistic career: «Write one true sentence.” Then those sentences were remade many times, and rigorously polished. I tried to talk about the architectural features of each building in a poetic language and at the same time to refer to other aspects, as well as cultural and social attributes related to Cuban culture: sugar, coffee, tobacco, and Afro-Cuban religions, all linked to architecture and Cuban customs and habits, which help us understand the relationship between Nature, Man and the City.

I can speak only about the English texts, but they read beautifully, quite poetically at times. How the translating was accomplished? Who worked on that?

I wrote the original text in English and after I delivered it to Angelika Taschen personally in Berlin, by the deadline—September 2005—she revised it and asked me to translate it into Spanish, as I was the author and so the person best suited for the task. I remember saying that I knew they had an excellent translation team, but she insisted and I agreed, so I appreciate the compliment. Translations into other languages were made by the editorial team linked to the publisher.

Let’s talk about logistics for a moment. How long did it take to shoot the pictures for the book? What part did you play in that process? Did anyone «dress” the locations for the photos?

Gianni Basso and I worked for a month. I proposed the buildings to be included in the book and took him to those places, and even suggested, in almost all cases, the best angles for many of the photos, since I knew each building very well, having photographed them several times.

This does not diminish or devalue Gianni Basso’s work at all. The images are imbued with his artistic and professional personality. The results prove that: the pictures are excellent. In all cases the existing conditions were respected, and I do not remember the environments have been adorned or “dressed,” or any of the photographed spaces having been changed or rearranged. The photographer was very pleased and satisfied with the pace of work, because I had previously advised him of the times of the day to make the best use of the light, which I’d learned from my previous experience shooting these locations.

What was your role in the book’s design?

None, unfortunately. And I’m very sorry about it. I completely disapprove of the design, especially regarding the lack of contrast between the texts and their backgrounds, the inclusion of some photos that are not focused on architecture, and other unnecessary graphic elements at the beginning of the book, such as the so-called ‘little postcards’ taken from the Revolution album. I complained about these points when I noticed them, because I was not consulted, to be honest—this was not included in the contract. I disliked this lack of good taste very much. To my eyes, it undermines the seriousness of the book. This is my personal opinion. I only wrote the book and proposed the order of buildings.

What was Angelika Taschen’s role in the book’s creation?

Angelika Taschen was an angel of a publisher, with impressive work experience. She is a highly educated and capable person, enthusiastic and demanding, very hardworking and experienced, maybe a little eccentric, but in any case great—wonderful. As with many other books pubished by Taschen, she worked as the editor and coordinator. She supervised the texts and photos and made the final decision on what to publish. She was involved with the design and layout, and regarding this point I have some objections. Sometimes Europeans have a distorted vision of Latin American culture in general, so they exaggerate colors, and sometimes even add a baroque style to objects and spaces that are alien to them. This may explain, perhaps, the motifs and intricate filigree designs used as the text backgrounds, which make them difficult to read.

Anything more you’d care to add?

Although I understand the space limitations and in some sense the interests of the editors, I regret that some buildings I consider important and beautiful were left out of the book. I think this topic could fill several volumes. Perhaps this is because I love Cuban architecture, and there are so many essential and memorable buildings in each period that I would like to see published. These buildings have come to be the best lesson for present generations, as they help us understand our history and culture and make us feel inspired in our heritage.