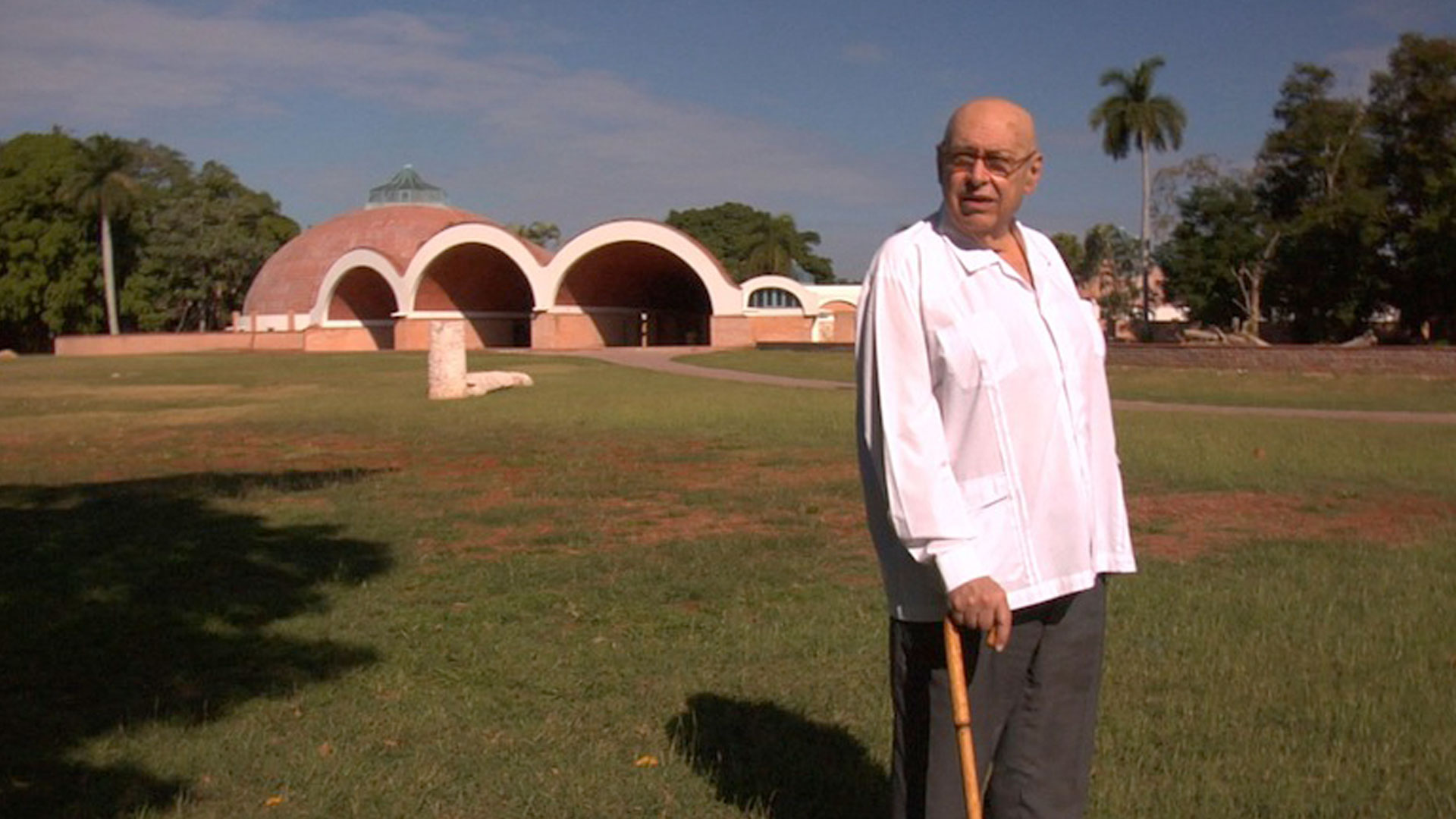 Ten years in the making, the feature-length documentary Unfinished Spaces focuses on the innovative, organic architecture of Cuba’s Escuelas Nacionales de Arte (now known as the Instituto Superior de Arte, or ISA). Initiated by Fidel Castro and Che Guevara in the early 1960s, the project fell out of favor a few years later and the buildings have remained unfinished. Cuban Art News spoke with the film’s producer-directors Alysa Nahmias and Benjamin Murray, as they were wrapping up work on the film and preparing for the world premiere in Los Angeles.

You started working on Unfinished Spaces in 2001. How did it begin? Were you both on the project from the start?

Nahmias: In 2001, I took a trip to Cuba and visited the schools as part of a group tour. I just fell in love with the space. And then by chance I was introduced to Roberto Gottardi and was told he was the architect. In that conversation with Roberto, I had a vision that this should be a film. As soon as I got back, I contacted Ben.

Murray: We started shooting within a couple of months at a symposium in Venice, Italy. That laid the groundwork for the story. Once we met the architects, it was amazing to see their personalities. We knew at that point we had a much bigger story than we originally thought.

You’ve been working on the film now for ten years. What has that been like? And what’s happened with the Escuela Nacional de Arte during that time?

Nahmias: The story would have been much different if we had told it all in 2001, both because of the story and because of me. I ended up pursuing a master’s degree in architecture over the course of doing the film—at Princeton from 2003 to 2006—and learning a tremendous amount about the history of architecture and design. That was probably the major thing affecting how I saw the story. And then just forming the relationships—both Ben and myself as a working relationship, but also our relationships with the three architects, getting to a kind of intimacy with them and their interviews over the course of ten years. In terms of making a documentary, that afforded us a really special kind of film.

Murray: Having the project go on for so long, it’s been interesting to see how the schools, which distilled the energy of the beginning of the Revolution, have become a part of our lives. We started to become emotionally invested, not in a cursory way. It matters to us, it affects our work lives, when news comes out about what may or may not be happening with the schools. It’s been interesting to have that as a backdrop to our lives for a decade.

Nahmias: Another thing, just as filmmakers—over ten years the technology has changed. When we started, we were shooting on mini-DV tapes. And then we were shooting on HD, and then HDV, and it just evolved. The project has gotten better for that, too, and we’ve learned a lot.

Murray: Getting the call that we’re in the festival—it feels like we’ve been given these two months to finish the film. It’s just nonstop work. It’s been a good process, and we’re very excited to have another artifact that has to do with the schools out there. Hopefully this will be a great encore to get the architects back and have them see the gratitude and the recognition that’s there. To have them in a room with the film directly in front of them, and to have the crowd, and people acknowledging them—I’m very excited just for that. We’re blessed and lucky that they’re all still alive and they’ll get to have this in their lives.

Nahmias: To answer the second part of your question, the story of the schools is still open. There’s still work to be done. At the beginning of the decade, when we began working on the film, Fidel Castro said that the schools should be finished. So the Cuban people who were put in charge of the restoration, with the three original architectss guiding them—they worked like crazy for the first few years and were actually able, over several years, to accomplish important parts of the restoration. But not all of it. Finances have always been an issue. Part of the struggle is that the U.S. embargo prohibits a lot of nonprofits from getting funding to Cuba to finish the restoration. So that’s still open. And we do hope that the film will spark interest around the world in supporting the preservation and restoration and completion of the schools.

Murray: It’s interesting how the world economic situation has directly influenced the restoration project. And it leads to a bigger question: With budgets being tightened, how do arts fit into budgets, with countries, with institutions? Where does culture fit into that?

Nahmias: Right. How important it is to preserve arts, and give funding to the arts, is definitely an interest we’ve had in this story.

Murray: One of the things that is so exceptional about these schools is that no matter what state Cuba has been in, and no matter what state the Schools of Art have been in, just as structures, they’ve been used the entire time to develop artists. And these are artists who are out there. This is a really active, great school. And I think that’s a very special situation, that it’s been able to exist for all these years.

Would you say that the film’s existence, even as a work in progress, has been a factor in drawing attention to the Schools’ architecture?

Nahmias: Once the authorities in charge of restoring the schools in Cuba realized what our intentions were in terms of how widely we wanted the film to be shown and the messages it was carrying, they were really supportive. And I think it’s definitely helped keep up the morale of the people who care about the restoration and preservation of the schools. It’s bolstered that.

Murray: The story of the schools transcends politics, which a lot of people get very emotional about. It takes something that a lot of people see as black or white and offers a gray area, where people on both sides can really appreciate the schools. And I think that is a testament to where the schools came from. They really captured the energy of the very beginning of the Revolution—this kind of youthful, irreverent, remake-the-world energy. And people on either side of pretty much any issue still respond to that.

Where do things stand now with the Escuelas Nacionales as an architectural project?

Nahmias: The two buildings by Ricardo Porro—the School of Plastic Arts or Visual Arts and the School of Modern Dance—are finished. They were triumphantly restored by the Cuban government. It was a real labor of love for a small team of people on a really small budget. Ricardo Porro had some problems with what they’ve done, but overall he’s very happy to have seen his schools restored. The state of the other three buildings—Vittorio Garatti’s School of Ballet and School of Music and Roberto Gottardi’s School of Dramatic Arts—are up in the air, and the architects are old. So it’s unclear what the future of that is.

Murray: The status of the schools’ restoration is something that’s really in flux. We’re not really sure. It’s officially on pause, and with the economic situation and other issues, it’s something that can change at any time. We’re hoping that this film can draw attention to it, and who knows? Maybe the schools will be getting restored again soon.

Tell us about the L.A. Film Festival premiere. Is the film in competition? Will the architects be there?

Murray: This is the world premiere for Unfinished Spaces. We are one of nine documentaries selected to be in competition at the festival. We’ll be there, and all three of the architects will be there. We’re very excited to get them together for a reunion. They’ll be at the premiere screening.

Nahmias: After the first screening there’ll be a Q & A with us and the architects. And there will be Q & As after the following screenings with Ben and me.

Nahmias: They’re all at the same theater, the Downtown L.A. Regal theater.

Where are you right now in terms of finishing the film?

Murray: We have our final cut. At this point, we’re doing the theatrical surroundsound mix, and all the color correction and titling—getting everything to look as good as possible for the screening.

Nahmias: Just getting excited about showing it in L.A., and also anticipating screenings around the world, starting immediately after the premiere.

Murray: Opening on the Friday before the premiere, we have a gallery in L.A. that will be showing paintings and artworks by students who went to the Schools of Art. As Ricardo Porro says, he wanted to build this fertility goddess that gives birth to art. And it’s really good that we’ll have a chance to show some of the works that have come out of these schools.

Nahmias: The film has been picked up by Latino Public Broadcasting, so it will be shown on PBS stations in the U.S. in 2012.

Murray: It’s different version—a one-hour TV version. So it’ll be a very painful cut for us to make. (laughs)

Fundación Cuba Avant-Garde, the organization that sponsors Cuban Art News, was one of the foundations that helped underwrite the film. What has fundraising been like overall?

Nahmias: The bulk of the cash funding has come from U.S.-based private foundations and public organizations—the Fundación Cuba Avant-Garde, the New York State Council on the Arts, the Graham Foundation in Chicago, the Jerome Foundation for Media Arts, the LEF Foundation. And then Ben and myself and our time—we can say it’s been a real labor of love, you know?

Murray: The general reaction has been overwhelmingly positive from anybody who has any contact with the story, the buildings, and the architects. We’ve been very lucky to be able to work within a space where pretty much any direction we go in, the response we get is positive and supportive.

Thanks for taking the time to speak with us. Great success with the screenings!