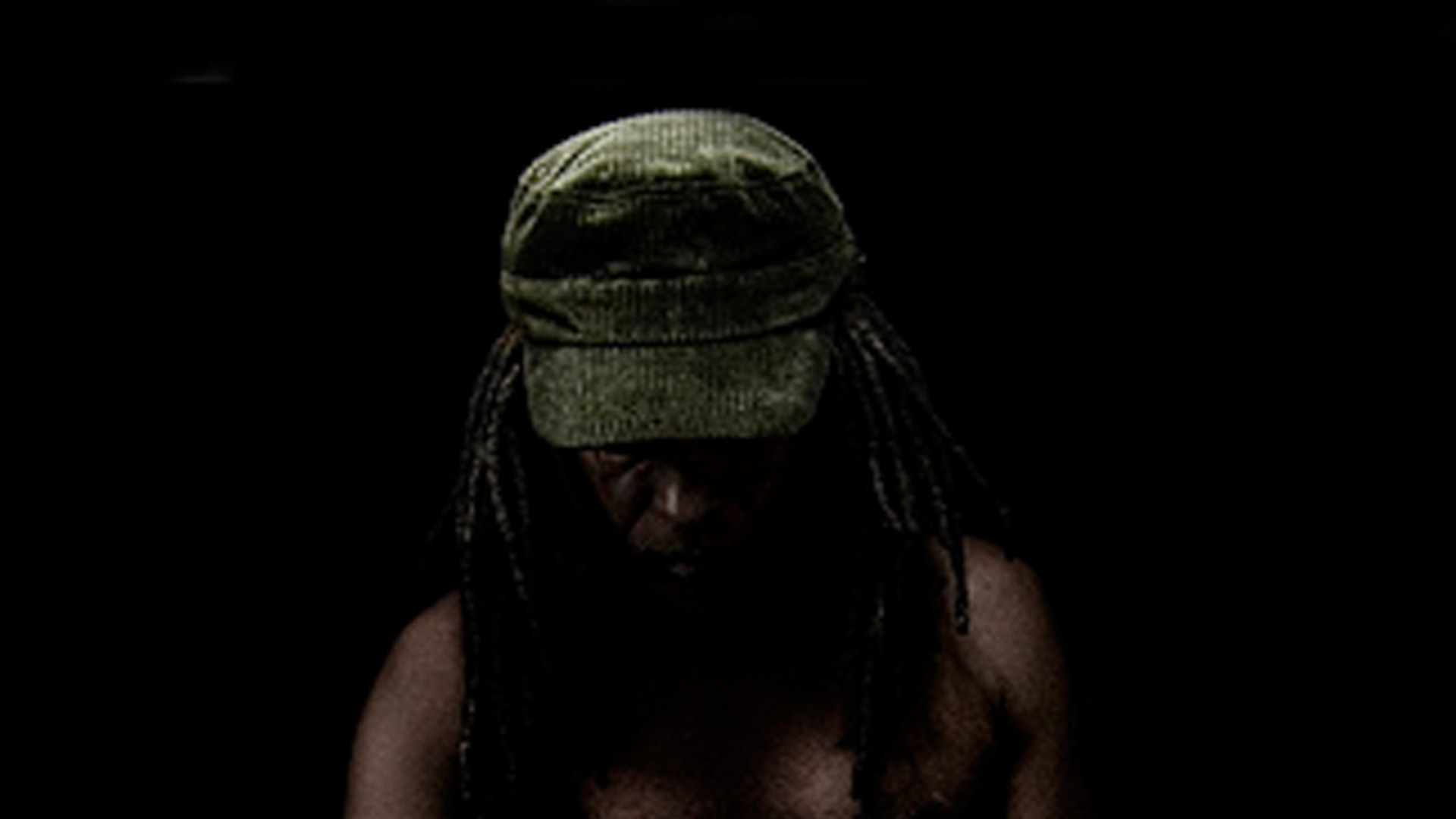 As Cuban Art News readers may recall, the exhibition Queloides: Race and Racism in Cuban Contemporary Art opened last April at the Wifredo Lam Center in Havana. Now, American audiences have their opportunity to view the show: Queloideshas come to the Mattress Factory museum of contemporary art in Pittsburgh. Hilary Robinson, Dean of the College of Fine Arts at Carnegie Mellon University, offers a thoughtful take on the show and its provocative explorations.

It is hard to miss it—around town, on posters, in exhibition information, on the invitation card: the provocative, challenging image. A mature man stands against a solid black background, looking down, hair in locks falling over his shoulders, eyes obscured by the peak of the green Cuban-style army cap (minus red star) on his head. His weight is on one leg; the knee of the other is bent, suggesting slow, easy movement. His right hand has a loose hold of a silver sword, its point touching the ground. He is naked. He is black.

Samurai (2009) by René Peña is the work that is being used in all the publicity material for this exhibition. In Cuba, where it was first shown this spring, the words ‘race’ and ‘racism’ in the subtitle indicated the reach, ambition, and risk of the artists and the curators—it was the first time that those words had been used in an exhibition title there. In the U.S., the issues have been well explored in the art world, but this image of Peña’s work is every bit as powerful here as it is in Cuba. The image echoes the pose of Donatello’s David (1530-32): an ambiguous figure, pubescent, effeminate in pose, hair and smooth skin. But in Peña’s life-sized photograph, the markers of pose, hair, and skin are not neutral. They mark a black man. A gentle, non-confrontational black man. A sexually mature black man, with sensuality in his gestures. An armed black man. A giant-killer. The image encapsulates, with a reduced, spare aesthetic, still-taboo topics emerging from representations of black men in the U.S.: violence, sexuality, and the non-neutrality of black skin. These are urgent issues in a country where large parts of the population cannot reconcile themselves to having a democratically elected black man as their leader.

The whole of the exhibition plays out these issues of representation and more, mainly grounded in the cultural and iconographic specificities of Cuba’s history and present. The paintings of Alexis Esquivel mix layers of irony and specific detail to comment on Cuba-U.S. politics. For example, in Smile you won! (2010), the face of Obama, fragmented as if in a faded wall-poster and featureless apart from the instantly recognisable grin, turns in the direction of two fighting boxers (a major sport in Cuba), one with black skin and white shorts, the other, his negative, with white skin and black shorts.

Many works in the exhibition employ poetics and frames of reference that are less transparent to a U.S. audience, but which play evocatively and suggestively with materials and representations. The gallery that houses Guardarraya’by María Magdalena Campos-Pons (2010) is filled with a heavily sweet smell. Two walls built from brown sugar bricks funnel the visitor towards a spread of pristine white sugar poured on the floor. This is then used as a ‘screen’ for a projection in which two women (one white, one black) embrace. A bunch of flowers passes between them; they interact animatedly, hug; there are images of fruit, of the legs of a running man, and of cloth twisted like an umbilical cord. Is it necessary to know that the word guardarraya refers to a track between different plantings on a farm? Or that the sugar bricks are commonly used for making desserts in poorer Caribbean communities? No: such information simply adds specificity to the meaning that is already created by the artist, confirming and enhancing rather than supplying the only key to understand the work.

Similarly in Roberto Diago’s Ascending City (2010), schematic models of wooden shacks, each about 12″ cubed, are piled high against one wall as if spilling through it and tumbling across the floor. Others perch, nailed to the walls like desecrated bird boxes. Each has been burned, but not fully consumed by fire. The acrid smell is an element in creating the sense of loss, ruin and deprivation that evokes housing conditions for many black Cubans.

The exhibition does not attempt to define through its twelve artists what contemporary Cuban art is or how it might be a ‘proper’ subject for art historians. The curators have rather demonstrated the diversity of Cuban art practices, and that equality can thrive only through recognition of and respect for difference.

Queloides: Race and Racism in Cuban Contemporary Art is on view at The Mattress Factory through February 27, 2011.