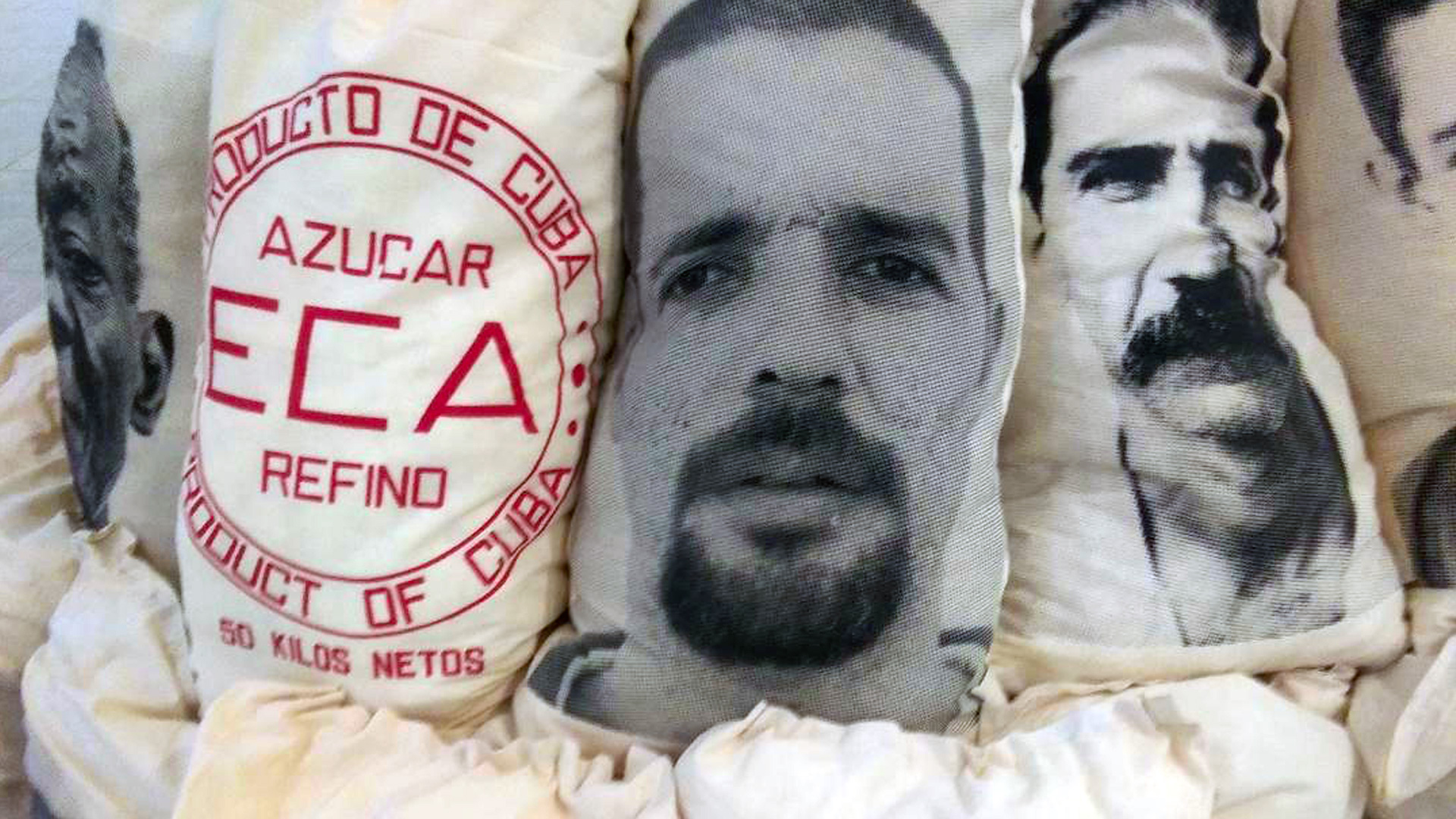 Since April, visitors to the Cuban Art Building of the Museo Nacional de Bellas Artes have been greeted by a series of installations by some of the island’s top international artists.

The first work that visitors encounter is sited on the entrance plaza outside the museum: Arpegio, a graceful arc of steel by José Villa. According to curator Corina Matamoros, Arpegio is an invitation—“a link between passersby and the sculptural tradition of Cuban art.”

Inside the building the visitors are greeted by José Manuel Fors’s new installation, Las materias.

“In this sculptural memory,” writes Matamoros, “is an authorial temperament willing to think about the simplicity of the materials, the recycling of elements, and the biological, historical, and technological cycles of existence.”

Nearby is Regata (1993), an early work by Kcho, comprised of small carved boats and the flotsam left behind by departing rafters. Regata, writes Matamoros, “prefigured the painful migratory events that broke out on the coasts of the country in 1994. It is an exceptional lesson of living history.”

Alacenas (Cupboards, 2016) is one of the last works by Los Carpinteros before their creative partnership dissolved. The deceptively simple installation consists of a line of battered kitchen cabinets, which hold the sounds of violent hurricanes behind their doors—“a moving social vision of the enraged storms that plague us in the Caribbean,” as Matamoros puts it.

In Partituras (Sheet Music, 2017), Carlos Garaicoa pays homage to the idea of the city by weaving together the performances of street musicians in Madrid and Bilbao. The musicians appear in individual video segments shown on tablet computers resting on music stands. Each is accompanied by Garaicoa’s interpretive drawings, suggestive of an unknown musical notation system.

On a three-panel video screen, the individual performances are combined in different sequences, bound together by a musical score by composer Esteban Puebla.

For Museos interiores, René Francisco has updated one of his most significant works, Taller de reparaciones. Surrounded by chain-link fencing, it is, in effect, a personal museum.

“In what is undoubtedly one of the outstanding works of his career, the artist collects his own experience and his relationship to objects,” writes Matamoros, “in the personal and professional diary that is the Taller.”

Matamoros also curated one of the thematic exhibitions in “Infinite Possibility”: Isla de azúcar (Island of Sugar), which, as she says, uses “the history of an industry to interpret the history of a country.”

“Not only art, but the whole national culture is illuminated by sugar,” she writes. The sugar industry “penetrated life in almost all areas: technology, social thought, popular culture or the collective imaginary.”

Isla de azúcar takes that premise as its starting point. The exhibition includes everything from statistics on sugar production to posters, newspaper photographs, literature, and theatrical productions as well as art.

“Sugar cane carries both sweetness and thought,” Matamoros writes. “An industry associated by history to the ignominy of slavery and its aftermath. A monoculture that raised us to the world’s leading producer of both sweetness and devastating decay.”

“Cuban artistic production has explored our famous manufacturing through diverse perspectives for four centuries,” says Matamoros. “Nothing has escaped the artist’s gaze: neither productive ups and downs, nor political utopias, nor bleak deficiencies.”

“When we think of ourselves as a country, it is clear that sugar and nation have gone hand in hand.”

For more on the other exhibitions in “Infinite Possibility,” see our walk-throughs of Nada Personal, on racism in Cuban art, and of El espejo de los enigmas and Más allá de la utopia, on re-readings of Cuban history and identity.

All five exhibitions in “Infinite Possibility” are on view through December 30 in the Cuban Art Building of the Museo Nacional de Bellas Artes.