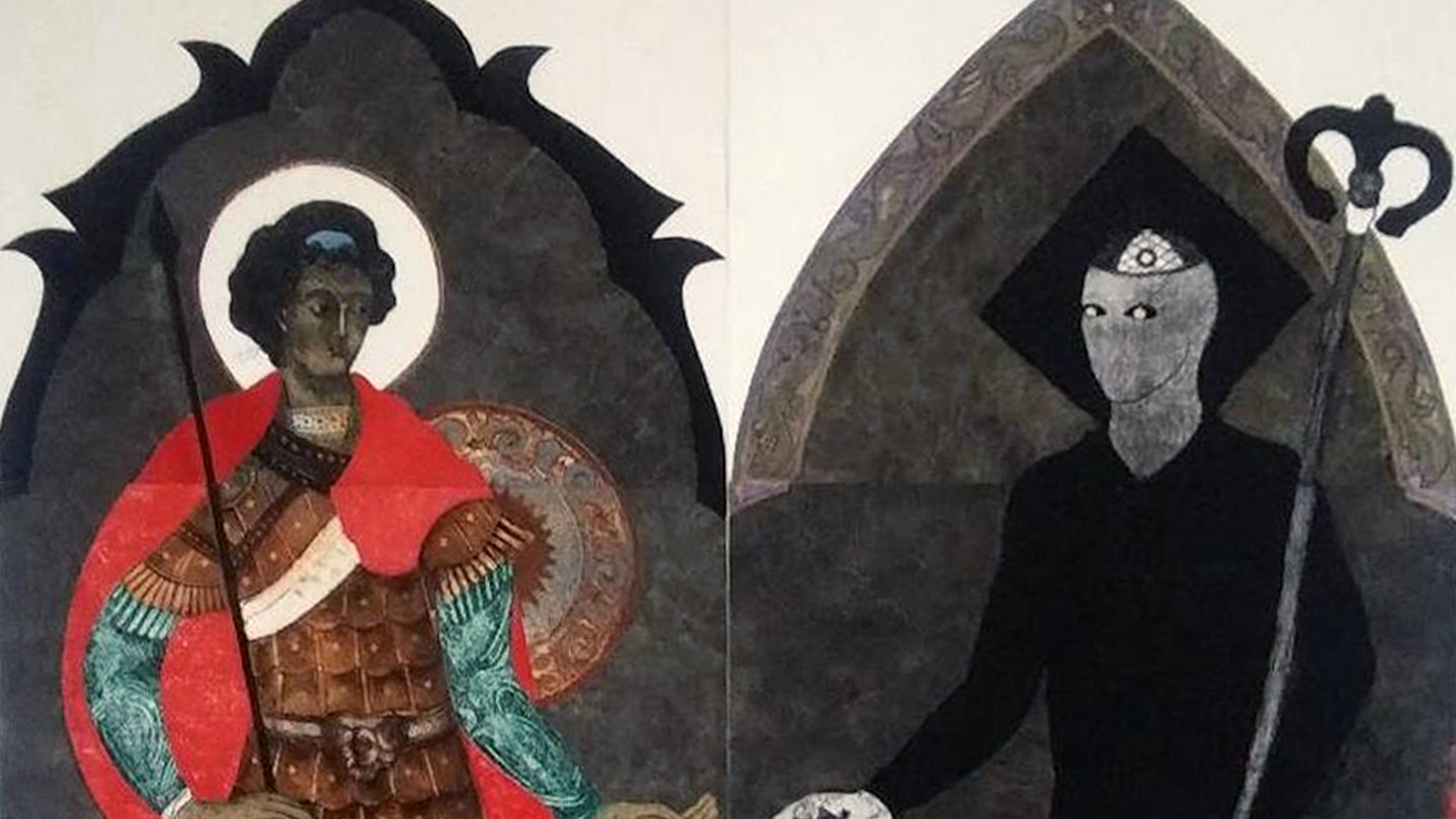 The exhibitions, which run through September, are presented under the theme of “The infinite possibility: Thinking about the nation.”

Co-curated by MNBA director Jorge Fernández Torres and María Lucía Bernal, El espejo de los enigmas offers what Fernández Torres called “a brief overview of what will unfold in the rest of the exhibitions.”

In her NYRB essay, Allen described The Mirror of Enigmas as “an irrational genealogy of Cuba’s mythic identity” and “an anarchic tour of the Cuban subconscious.” Both descriptions may well be accurate.

The work of Cuban American artist Ana Mendieta was, for Fernández Torres, an important springboard for the show. And on opening day, her installation Ñáñigo Burial (1976) was a focal point for visitors.

Taking its title from an Afro-Cuban brotherhood, Ñáñigo Burial (1976) consists of 47 black candles that form a silhouette of the artist’s body. Mendieta, wrote Fernández Torres, “wanted to melt her body into Nature.”

At the age of 12, the Cuban-born Mendieta had been sent to live in the United States. “Having been stripped of the place where she was born,” wrote Fernández Torres, “made her return to what she called the Mother Land.”

Other works interpret aspects of Cuban history and iconography. A wall of drums—with headphones playing their music—stands near El Monte (1984), an installation by Juan Francisco Elso Padilla. Made of wood, plant material, and animal skins, with small ceramic dishes on its feet, it echoes the human silhouette of Mendieta’s installation, and the sense of being rooted in nature.

Across the gallery, Dando y dando (Giving and Giving, or Gift for Gift) is a large-scale collaboration between master printmaker Belkis Ayón and her colleague and teacher Ángel Ramírez. The work envisions an exchange between Europe and Africa.

Several works in the show address the insularity of Cuba as an island nation, including El bloqueo (1989) by Antonio Eligio (Tonel).

A whimsical wooden sled embellished with gothic gargoyles, created by Los Carpinteros in 1994, carries the inscription La otra orilla (The other shore).

Above it, the sculpture Las playitas y el Granma (1988) by Alejandro Aguilera depicts the Virgen de la Caridad del Cobre, the patron saint of Cuba, and her miraculous rescue of three fishermen in the Bay of Nipe in 1611.

But instead of the fishermen, Aguilera puts Fidel Castro and other heroes of the Revolution under the Virgin’s protection, blending her story with the 1956 journey, enshrined in Cuban history, of Fidel and some 80 other revolutionaries traveling from Mexico to the Island aboard the yacht Granma.

Cuban history comes in for closer examination in Beyond Utopia. The curator, Delia María López Campistrous, walked us through the exhibition, which begins with the arrival of Christopher Columbus in 1492 and the Spanish colonization that followed.

“Columbus is an enduring theme in Cuban art,” López Campistrous said, “but as a figure he has always been treated very benignly, with kindness.” The same is not true, she noted, for the island’s indigenous population.

Flavio Garciandía’s Quimera del Conquistador, a work in his El Dorado series, depicts an arriving Spaniard as an apparition rising out of the waves. Nearby, a work by Manuel Mendive depicts the arrival of Western theology as a jarring intrusion on an idyllic, ordered paradise.

Elsewhere in the gallery, a work by José Manuel Mesías alludes to an 1812 slave rebellion. Made in 2019, his Estandarte de la Virgen de los Remedios. 1812 is presented as if it were a relic of that uprising, “a second flag to be used to signal the rebellion [known as the Conspiración de Aponte] in the village of Guanabacoa.”

The section that follows presents portraiture “as a way of rethinking the nation,” said López Campistrous. The figures depicted in those canvases “were thinking about the economy, they were thinking about architecture, about political structure, education, philosophy.” The section ends with a grouping of portraits depicting José Martí, including a Pop art multi-portrait by Raúl Martínez.

The Cuban independence movement, said López Campistrous, “is of course one of the themes most widely addressed in Cuban art.” Even today, she said, art about the independence movement “is a form involving religious devotion converted to a civil devotion, which manifests, practically speaking, in a reverence for historical relics.”

An early work by ’80s Generation artist Leandro Soto attests to this impulse. Incorporating mementos belonging to an ancestor who fought for independence, the work “begins to ‘museumize’ personal remembrance,” said López Campistrous, with elements that can speak of a historical moment. At the same time, Soto “converts them into a small altar.”

In addressing the independence movement, Reynier Leyva Novo takes a more conceptual approach. A wall case holds works from his 2012 series The desire to die for others: weapons used by independence fighters, meticulously cast in clear resin. The effect is ghostly and somewhat detached from history.

Perhaps the exhibition’s most ambitious re-reading of history is José Manuel Mesías’s two-canvas installation: the painting Rectificaciones a la obra de Armando Menocal “La muerte de Maceo” (Corrections to the work by Armando Menocal, “The Death of Maceo”), with a second painting in front of it: Hortus conclusus, Study of plants in the inferior half of the base painting.

Near this installation is the painting that Mesías’s work is intended to correct: the 1908 canvas by Armando García Menocal, La muerte de Antonio Maceo, depicting the death in battle of Maceo, the second-in-command of the Cuban Army of Independence, in 1896.

That placement, said López Campistrous, “is a very deliberate intention, so that the public understands the relationship between the original Menocal painting and the Mesías work.”

As the show progresses through the 20th century, the art on view becomes increasingly contemporary, with the Revolution, migration, and other issues coming into focus. Works like Como te cuento mi cuento (How I Tell You My Story, 1994), by Guillermo Ramírez Malberti, continue to merge the personal and the historical.

The Mirror of Enigmas, Beyond Utopia and the other exhibitions in “The Infinite Possibility” remain on view at the Museo Nacional de Bellas Artes through September 30.

Last month, Cuban Art News explored another exhibition in “The Infinite Possibility”: Nada personal (Nothing Personal), a look at race and racism in Cuban art. Curators Roberto Cobas Amate and Laura Araño Arencibia walked us through the show. Read it here.

Next: Two more exhibitions in “The Infinite Possibility,” curated by Corina Matamoros.