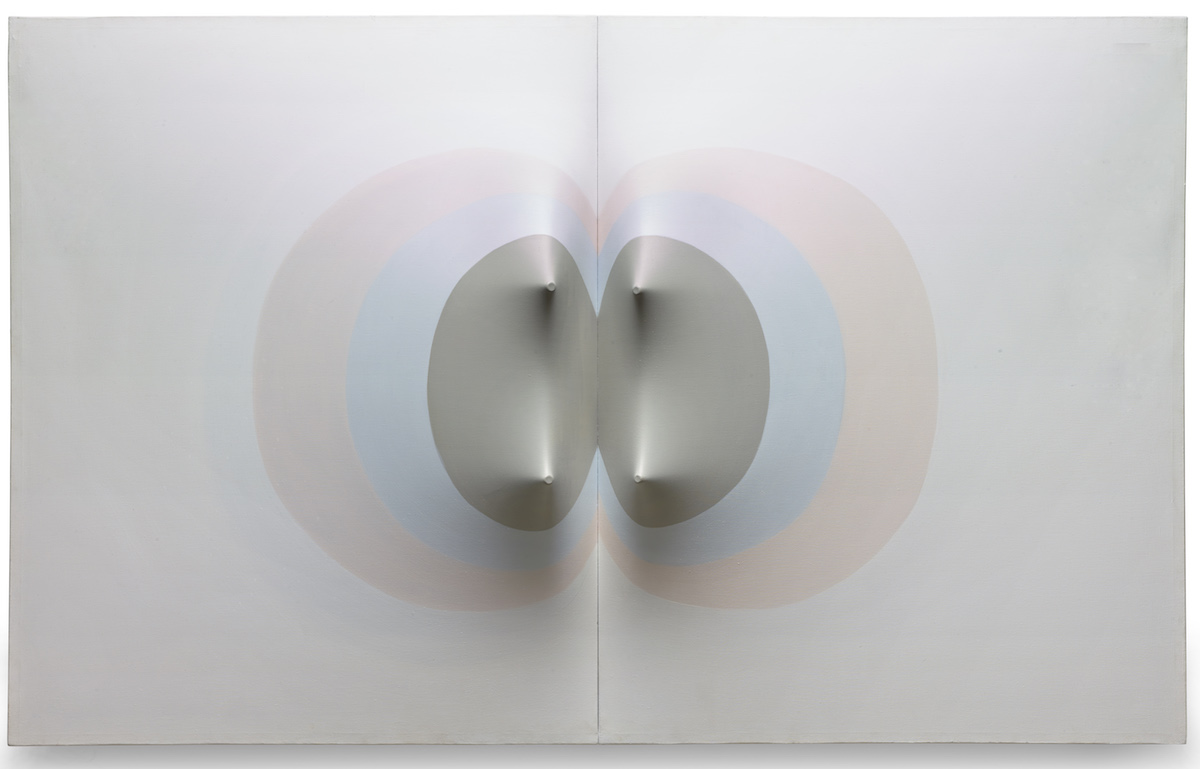 Zilia Sánchez: Soy Isla recently opened at the Phillips Collection in Washington, DC, where it runs through May 19. Janet Batet takes us through the exhibition and Sánchez’s seven-decade-long career.

Zilia Sanchez: Soy Isla (I Am an Island) presents more than 60 works—paintings, sculptural canvases, works on paper, as well as illustrations, sketches, and a video documentary. Together, they offer a panoramic view of a prolific career spanning more than 70 years.

Zilia Sánchez (b. Havana, 1926) studied at the San Alejandro National School of Fine Arts in Havana, where she graduated in 1957. In the 1950s Sánchez was a member of the iconic Cuban group Los Once, and also worked in theatrical set design. Leaving Cuba in 1960, she lived in Madrid and then in New York from 1964 to 1972, before finally settling in Puerto Rico.

Soy Isla includes early works made in Cuba, such as Azul, azul (Blue, Blue 1956) and Afrocubano (1957), which reflect the influence of Art Informel—a European abstract movement of the 1940s and ’50s that paralleled Abstract Expressionism in the US. In these works, as well as in Untitled (1965), Topología (Topology, 1965–93) and Furia II (Fury II, 1972), Sánchez uses drawing to trace, in lines of filigree, unknown rhythmic cartographies of personal significance.

In Havana in the 1950s, Sánchez had already begun to experiment with slightly modeled canvases. During her time in New York, she fully developed the painting-sculptures for which she is best known: unframed, modular structures of wood and canvas that defy the two-dimensional to settle definitively in space.

In the subsequent decade, the artist’s language reached full maturity. The tactile promontories increased, and drawings populated them, creating capricious, hermetic narratives. Signs, islands, and circular itineraries appeared, as in Lunar con tatuaje (Lunar with Tattoo, 1968/96), Lunar negro con tatuaje (Black Moon with Tattoo, 1975) and Soy Isla. Compréndelo y retírate (I Am an Island: Understand It and Go Away, 1990).

Sánchez’s art escapes easy classification. Although her work shares certain similarities with Minimalism and hard-edge painting—geometry, serial elements, economy of forms and fields of flat color—the aseptic, impersonal character of both these movements is irreconcilable with her vision. With its imposing sensuality and inescapable autobiographical stamp, Sánchez’s work consistently generates an emotional response, in which the sensual validates tactile desire—what Severo Sarduy has described as its “space of tactility.”

Unlike hard-edge painters, Sánchez is not interested in color. Her palette is restricted to black, white, gray, blue, and pink. Instead, the voluptuous promontories of her canvases claim continuous games of light and shadow—an inherent quality of the tropics. In an interview with Gilio V. Blanc, Sánchez said: “In the tropics, in the strongest sun of the day, everything is highlighted. The more varied colors of the morning (the time of day that Domingo Ramos liked) and late afternoon (as in many pictures by Amelia [Peláez]) don’t exist.”

Although its sculptural, modular character would seem to bring it closer to Minimalism, Sánchez’s work also bears analysis in the tradition of kinetic art. Her works force the viewer’s displacement in space. That displacement animates the volumetric modules—often diptychs—that seem to copulate before the eyes in a magnificent dance. This may be seen in Amazonas (1978, from the series Topologías eróticas) and Lunar con tatuaje (1968/96). The fact that the modules are identical, like mirror images, underscores the homoerotic sensibility that animates them. At times, a song of female genitals claims the center of the canvas, as in Topología erótica (Erotic Topology, 1960–71) and Juana de Arco (Joan of Arc, 1987). Here, vulva, clitoris, and anus reaffirm the perennial cycle between the micro and the macro, the personal and the universal, that are the hallmarks of an artist for whom the gender problematic—in the midst of the preponderant heteronormativity that we inhabit—is an omnipresent theme.

Titles are another vital component in Sánchez’s work that separate her from the Minimalist and hard-edge movements. Many of her titles have mythological and/or historical inspirations, such as Troyanas (Trojan Women, from the series Modulos infinitos, Infinite Modules,1967), Amazonas, and Juana de Arco. They accentuate Sánchez’s feminist position, becoming a point of resistance against those two movements, typically represented by male figures.

Zilia Sanchez: Soy Isla is an admirable show. Above all, it opens the door to further study and recognition of this undeniable figure in Cuban, Latin American, feminist, queer, and contemporary art.

Zilia Sánchez: Soy Isla runs through May 19 at the Phillips Collection, Washington, DC.