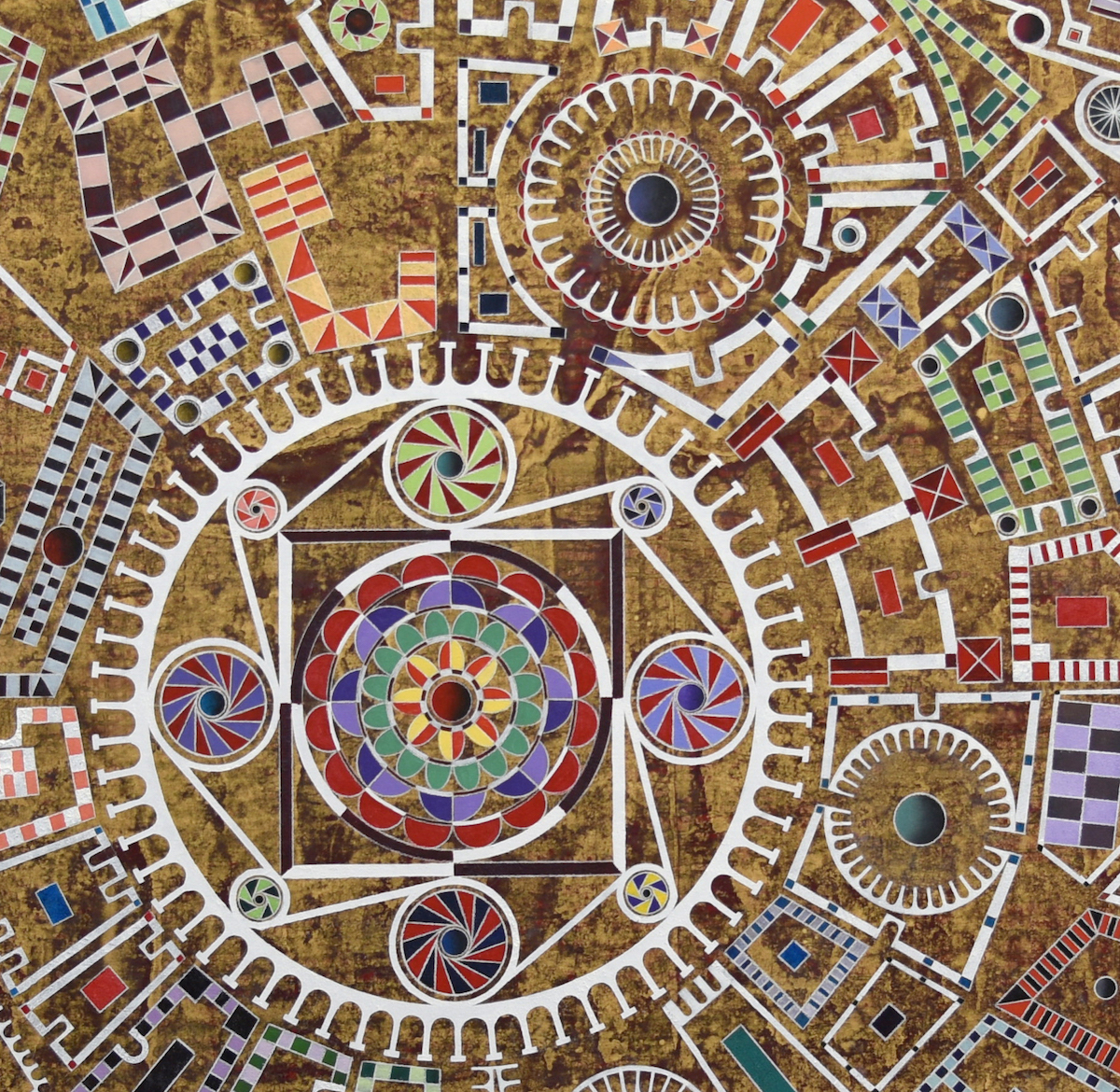 Opening Saturday: Estévez in Tucson. In Greek, the word entelecheia describes the dynamic transformation of idea into reality. That’s the inspiration behind Carlos Estévez: Entelechy, Works from 1992 to 2018. Opening this Saturday, January 26, at the Tucson Museum of Art, the mid-career retrospective presents more than 70 paintings, drawings, installations, and sculptures by Estévez, spanning a quarter-century of work.

Guest-curated by Carol Damian, former director and chief curator of Miami’s Frost Art Museum, the exhibition explores many of the artist’s recurring themes, from human spirituality to the structures of the body. In addition to a preview on Friday evening, January 25, events on Saturday include a conversation between Estévez and Damian at 1 p.m., followed by a book signing to celebrate publication of a major monograph about the artist.

Carlos Estévez: Entelechy, Works from 1992 to 2018 remains on view at the Tucson Art Museum through May 5.

Opening Monday: Soriano in New Jersey. In a career spanning more than 50 years, Rafael Soriano was primarily known as an abstract painter. But in preparing the new exhibition at the William Patterson Gallery in Wayne, New Jersey, curators Alejandro Anreus and Kristen Evangelista chose to focus on one particular aspect of Soriano’s oeuvre: his depictions of the human head.

Opening this Monday, January 28, Rafael Soriano: Cabezas/Heads showcases more than 20 of these canvases, which span some four decades of the artist’s career. It is the first exhibition to foreground these works, which, as Anreus writes, “express deep existential concerns regarding freedom, identity, and the desire to communicate with a sense of reality that is not simply material.” Anreus will give a curator’s talk on Wednesday, February 6, at 2 p.m., followed by the opening reception, which runs from 3 to 5 p.m. On view through May 8.

Lam in New York. For many years, the Zurich-based Galerie Gmurzynska has represented the estate of Wifredo Lam. Now, Gmurzynska is inaugurating its new space in New York—its first outside Switzerland—with a Lam retrospective.

Presented in collaboration with the family of the artist, Wifredo Lam: “Le nouveau Nouveau Monde” presents a chronological overview of the artist’s five-decade career. Works on view include rarely seen major works from the 1930s and 1940s, as well as signature works from the 1960s and 1970s. On view through February 28.

Salazar in Havana. Last Thursday, Glenda Salazar opened Lo que no te mata te fortalece (What Doesn’t Kill You Makes You Stronger). Dedicated to the artist’s grandmother, who passed away in December, the exhibition includes work from several recent series including Proyecto Renovación (2018–19), paintings of plants collected during Hurricane Irma. The series that gives the exhibition its title features photographs of different types of flowers, each petal imprinted by the artist with the letters of a word: crece, piensa, decide, lucha, desea, persevera (grow, think, decide, fight, desire, persevere). Other works include the photographic installation Proyecto Intercambio (Exchange Project) and Proyecto Border, a series of drawings in graphite. On view at Galería Artis 718 in the Playa district.

Opening today: González in California. Almost two years ago, María Elena González spoke with Cuban Art News about her experiments in interpreting the markings on birch-tree bark as notations for player-piano rolls. Now, an exhibition of those works is opening at the Mills College Art Museum in Oakland, California. María Elena González: Tree Talk includes three scores for player piano adapted from the bark of three different trees, along with related drawings, prints, and video and sound installations. Programming during the exhibition will include a live performance of music adapted from the tree-bark markings, and a live performance of the player piano. The show opens today, with the opening reception taking place this Saturday, January 26, 5–7 p.m. Tree Talk runs through March 17.

Changes at the Cuban National Ballet. Viengsay Valdés, longtime Primera Bailarina of the Ballet Nacional de Cuba, has been named as deputy artistic director. BNC co-founder and Prima Bailarina Assoluta Alicia Alonso, 97, will retain the title of general director, but in practical terms leadership of the company will be in the hands of Valdés. A member of the BNC for 25 years, Valdés has performed around the world, dancing the lead roles in Swan Lake, Cinderella, Carmen, Don Quixote, Romeo and Juliet, and many other ballets. She assumes her new role immediately, and will begin preparing the company for its upcoming tour of Spain in May.

Valdés is renowned for her classical ballet technique, seen here in a short video clip, in which she performs a series of fouettés in Don Quixote.

Early February: Havana International Book Fair. For Cubans on the island, the annual ten-day fair one of the year’s most important cultural events. Held in the Fortaleza San Carlos de la Cabaña, the 2019 fair—the 28th edition—celebrates the 500th anniversary of the founding of Havana and the 60th anniversary of the Cuban Revolution. This year’s fair is dedicated to author Eduardo Heras León, winner of the 2014 Cuban National Literature Award, and will showcase the People’s Democratic Republic of Algeria. According to Juan Rodríguez Cabrera, president of the Cuban Book Institute, over 2 million people visited last year’s fair, which saw the average price of a text drop to 7.5 Cuban pesos. February 7–17.

Mid-February: Sánchez in Washington, DC. At the age of 90, Zilia Sánchez is celebrating her first US museum exhibition—a long overdue survey of her almost 70-year career. Featuring approximately 65 works, the show includes paintings, shaped canvases, works on paper, and sculptural pieces, along with illustrations, design sketches, and ephemera. Opening February 16 at the Phillips Collection, Zilia Sánchez: Soy Isla runs through May 19.

Mid-February: Soy Cuba in New York. New York Times film critic Manohla Dargis called it “one of the most deliriously beautiful films ever made.” And New Yorker critic Terrence Rafferty wrote, “They’re going to be carrying ravished film students out of the theaters on stretchers.” Now, a new, high-resolution digital restoration of Soy Cuba / I Am Cuba is coming to the Film Forum in Manhattan for a one-week engagement. Opening Friday, February 15, the 1964 classic by Russian director Mikhail Kalatozov—with screenplay by Enrique Pineda Barnet and Russian poet Yevgeny Yevtushenko—will run through Thursday, February 21.

April: Cuban artists at Art Paris. This spring, the fair Art Paris turns a spotlight on Latin American art with its “Southern Stars” program. Around 20 of the fair’s participating galleries have joined together to present some 60 artists from Latin America and the Caribbean. Among them is the Bejing-based Xin Dong Cheng Gallery, which will present six Cuban artists across the generations: Manuel Mendive, Raúl Martínez, Adonis Flores, René Francisco Rodriguez, Michel Mirabal and Yunier Hernández Figueroa. And look for work by Juan Roberto Diago, Kcho, and Agustín Cárdenas at the Galerie Vallois booth. Art Paris runs April 4–7 at the Grand Palais, Paris.