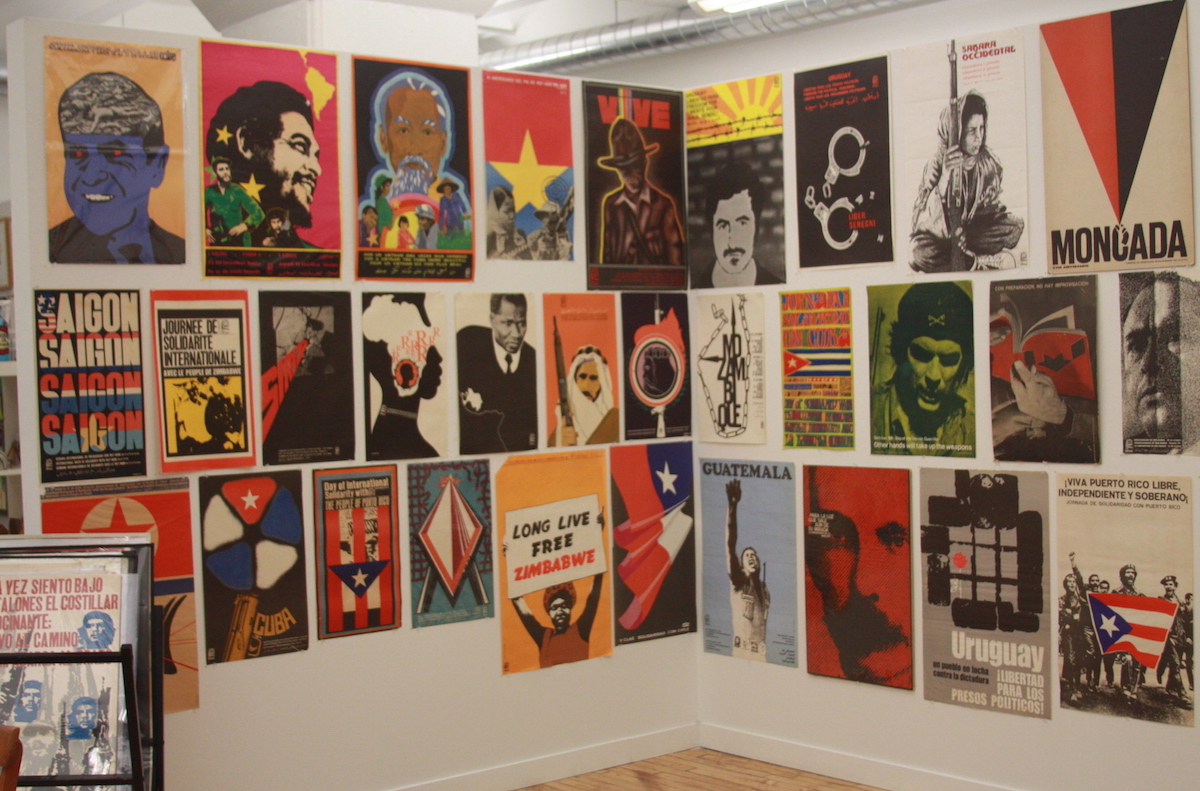 Sandra Levinson knows exactly where to find every piece of paper, among the countless photos, books, gifts from famous Cuban artists, old calendars, and artifacts that she has been bringing back from Cuba since 1969. Levinson says “Cuba,” and her laughter expands to fill the space.

The place where we’re speaking is the new headquarters of the Center for Cuban Studies (CCS), now in the Dumbo neighborhood in Brooklyn. It’s taken almost a year to unpack and settle in. But Levinson does not regret moving from Manhattan’s Chelsea neighborhood, where, after ten years, soaring rents made it impossible to stay.

“I fell in love with this place as soon as I saw it,” Levinson says. “I loved the original floors, and the fact that they were just putting in air conditioning. And when we saw the roof garden, all I could think was: “What a great place for a Cuban band and a fundraiser.”

The Center is finally ready to resume its many functions. As we speak, the walls around us display Cuban Revolutionary Posters 1960–1980. The exhibition (which ran through December) includes 140 posters, chosen from the 5,000 or so that the Center owns. They are posters designed by the Cuban film office ICAIC to promote movies, and by other Cuban government agencies to present Cuba to an international audience during the Cold War years.

“The posters I really love are meant just for Cubans—the ones that are meant to persuade Cubans to behave in a socialist way, shaping revolutionary consciousness,” says Levinson, cradling a tiny cup of Cuban coffee in her hands.

You were already visiting Cuba in the 1970s and 1980s. What can you tell us about how Cuban people responded to posters like these, in those years?

Very early on, people [in the government] realized that if they were going to reach ordinary Cubans with revolutionary messages, film and photographs and graphic design were most useful, especially in the 1960s and 1970s.

What was important was that you reached people very quickly, with a short graphic message about building socialism. We all know that Cubans were not actually reading Marx and Lenin. They liked Fidel Castro.

in a previous conversation with Cuban Art News, you mentioned that your dream was to do an exhibition showcasing all your posters—not unlike the one we’re seeing at the Center today.

But this is a small exhibit—140 posters. I really want to do an exhibition at a museum or university, which would track the progress, or lack thereof, of the Cuban Revolution. You can tell almost the entire story of the revolution through posters. You can understand the goals and the kind of society the Cubans hoped to build.

We’ve loaned posters to museums in Argentina, Germany, and Italy. But here in the US, most museums don’t really value them. I wish we had a museum here that was solely dedicated to graphic design.

Tell us about the moment, during your first visit to Cuba, when you first had the impulse to start collecting posters.

Here in the United States, posters were already part of our movements against the Vietnam War and for Civil Rights. They were what I looked for when I went to Cuba. The first poster I collected—of Martí and Fidel in profile—I ripped off a public wall in Vedado. I just took it. Of course, now I’m a bit ashamed of that.

On that first trip, my hosts loaded me down with posters, and when we opened the Center in 1972, we put out the word for people who traveled to Cuba to bring us donations. In those days, Cubans were pouring gifts on visitors from the States. They gave us books, posters, bottles of rum, even cigars. Many people returned with donations for our library.

You were among the first to promote the reestablishment of relations between Cuba and the U.S. How did the Cuban government respond to you and other American activists?

There were many before me—academics and activists who had been traveling to Cuba since the beginning of the revolution. My first trip wasn’t until 1969. But the Cubans realized early on that they had to meet people in the States who were involved with teaching about Cuba or Latin America, or with supporting Cuba.

The Center for Cuban Studies was started because a group of fairly well-known people—photo-journalist Lee Lockwood, whose idea it was, and playwright Jack Gelber, filmmaker Saul Landau, The New York Review of Books’ Bob Silvers, and others—wanted to open such a center.

What was your impression when you first arrived in Cuba, compared to what you had heard about it here in the US?

I remember, on the plane from Mexico to Havana, saying to myself: “Well, I’ll probably really admire what they’re trying to do, but I wouldn’t want to live there.” Because deep down, as a US citizen, my idea of that kind of society was the Soviet Union.

Instead, I fell madly in love with Cuba from the first visit. Cubans will talk about everything, and are really thoughtful about their society and their place in that society. Plus, they treat that knowledge with an enormous sense of humor. It’s a very winning combination, because no one knows better than the Cubans what their problems are.

Did you ever seriously consider moving to Cuba?

Oh, yes. But my Cuban friends, both in and out of government, would always say that “Cuba needs you more in the US than here.” Remember, Cuba didn’t have many friends in the US, and they saw us as a kind of support system.

So I couldn’t convince anyone in the government to let me emigrate. But I was finally able to rent an apartment and receive temporary residency status. I go back and forth frequently enough that I now feel I have the best of both worlds: New York City and Havana.

Do you think US art institutions would have been more interested in collaborating with you if you had been less involved with the Cuban government?

Yes, I’m sure. In a way, we came along too early, before Cuba was considered “acceptable.” We wanted to help bring about the normalization of relations with a country that the US considered “abnormal,” even an enemy. Museums and universities didn’t want to be dragged into politics.

In the case of the two universities that were interested in working with us, their legal teams said absolutely not, because Cuban exiles were bombing places then. CCS was bombed eight months after we opened. So it was a difficult time.

You’ve seen changes in Cuban society first-hand. What do you make of the evolution of the art market on the island?

There really is no domestic art market, because most ordinary Cubans can’t afford to buy good art. Many do, however, own art, mainly because Cuban artists are very generous and they give works to their friends.

One of the problems I see with not having a domestic art market is that many artists are making art to appeal to an international art buyer, as opposed to making art for their community. The artists that I like the most are the ones that, whether self-taught or academically trained, say “Cuba” to me.

The Center’s Cuban Art Space shows every kind of Cuban art. You can see that with our Holiday Fair, ongoing [in December], with lots of craft items, small art pieces—ceramics, sculpture, dolls, clothes, and more. Cubans make art out of every possible kind of material, whatever is available.

Now that you’re finally up and running in Dumbo, what’s next for the Center?

We’re trying to build a new audience here, to bring in not only our members but the artists, filmmakers, architects, videomakers, and artisans who populate this area.

We have many in our own building. Next door to us are candle makers, and around the corner is someone with the biggest print machines I’ve ever seen. Artist Juan Sánchez popped in the other day—he’s also in the building. Bernardo Navarro, the Cuban artist who works with us, will be giving printmaking classes.

We want to build exchange programs with Brooklyn groups. I watched a TV program recently about some young female chess players in Brooklyn. I would love to take them to Cuba to play young Cuban players!

There are so many exchange programs we want to initiate, but this is a tough time for us economically. Our travel program, which had been providing one-third of our revenue, has been hurt by Donald Trump. His State Department published a widely distributed warning that it wasn’t safe to go to Cuba.

Even people who have already traveled are reluctant to return in the current atmosphere—despite the fact that the largest international travel association named Cuba the safest country in the world for visitors.

What we want to do next is to help bring artists from Cuba, and take Brooklyn artists to Cuba—to make that connection. Cuba is ideal for real, serious exchange, and we want to help make that easier, for both institutions and individuals.