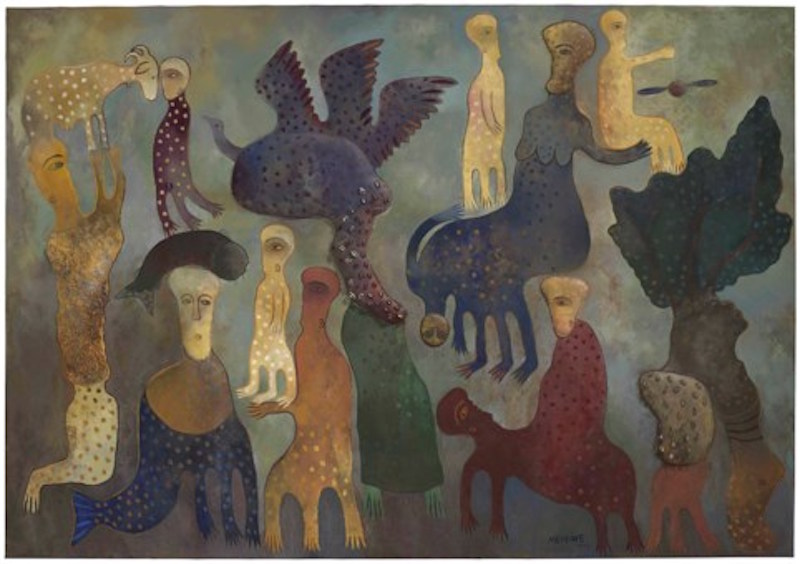 Followers of contemporary Cuban art got a holiday surprise when, on Christmas Day, the French art-market database and website Artprice posted an “Art Market Insight” feature about Cuban art.

“For buyers,” Artprice wrote, “Cuban artists are an interesting long-term investment,” in part because collectors “can access major works by well-established artists at cheaper prices than those asked for major European or American signatures of the same generations.”

Titled “Encouraging figures for Cuban art,” the story outlined the recent history of Cuban art in the international market and identified some of the factors in its ongoing positive trend.

As a result of those events, Artprice wrote, Cuban art became “increasingly diversified.” Obama’s speech had significant impact outside Cuba: “It focused attention on the Cuban art scene and contributed to an awakening of the Cuban art market on the major international marketplaces.”

Another turning point, in Artprice’s outline, was the decision of the Italy-based Galleria Continua to open an exhibition space on the island in late 2015.

In addition to bringing young Cuban artists like José Yaque and Elizabet Cerviño into its international gallery circuit—which includes exhibition spaces in Italy, France, and China—Continua has brought the work of international artists like Michelangelo Pistoletto, Anish Kapoor, and Kader Attia to Havana, broadening the contemporary cultural perspective on the island.

According to a recent article in the Financial Times, Continua will open another space, “El Páis del Arte,” in May 2019, coinciding with the 13th Havana Biennial.

A collaboration among Continua, the Cuban government, an anonymous private collector, and Pistoletto, El País del Arte will occupy the former home of the newspaper El País, a four-story, Art Deco building in Central Havana. The multi-disciplinary space will be dedicated to “the development of art and society,” offering spaces where “events, exhibitions, meetings, theater, performance and gastronomy will all find a home. There are also plans for an artists’ residency program, bookshop and library.”

The FT noted that Continua’s calendar of “events, performances and exhibitions — sometimes in state-run spaces such as the Wifredo Lam — attracts visitors and brings foreign inspiration to the native scene,” adding that “the commercial benefit of nurturing little-known Cuban artists, and taking them to the nearby Miami fair [Art Basel Miami Beach], is evident.”

For Artprice, “the militant artist Tania Bruguera” is an art-market factor in her own right. Her arrest in December 2014, Artprice wrote, triggered broad support in the international art community. “In the auction sphere, the art market also reacted by giving her greater visibility and carrying her sculpture Destierro (Displacement) to double its estimate at Phillips on 26 May 2015 ($81,250). In December of the same year, the same work was seen on offer for an additional $110,000 (i.e. $191,250) at Art Basel Miami.”

In 2018 Bruguera presented major installations at the Museum of Modern Art, New York, and Tate Modern, London. These exhibitions exemplify another factor that Artprice cited: a “revaluation” of Cuban art by major international museums, including MoMA, the Guggenheim, the Pompidou Center, and Tate Modern.

“These museums, with the help of specialized acquisition funds like the MoMA’s Latin American and Caribbean Fund, collect Cuban works after carefully analyzing what is still a relatively opaque market,” Artprice wrote.

As an example of an artist on the upswing, the article discussed Manuel Mendive, who, in his mid-70s, is described as “an emerging signature on the international market.” Obama’s 2014 speech “had an immediate impact on the prices of this key figure on the Cuban artistic landscape,” Artprice wrote. “His annual turnover shot up—multiplied by 15 in two years—thanks to American sales.”

Mendive’s international profile was also enhanced by his first New York museum exhibition at the Bronx Museum of the Arts in summer 2018. The exhibition included works that Mendive had created for “Artes de Cuba,” the cultural showcase presented last spring at the Kennedy Center for the Performing Arts in Washington, DC.

Artprice noted a similar trend of rising annual turnover among such diverse artists as “Dario Viejo, Esterio Segura, Mariano Rodriguez, Carlos Enríquez Gómez and even Felix Gonzalez-Torres. . . . All have recorded auction records in the last three years.” Notably,  Roberto Fabelo, like Mendive, has had a rapid rise in his prices at auction recently.

In evaluating the market for contemporary Cuban art, Artprice noted that “demand has grown considerably in the last four years, and prices are rising steadily.” Major collectors in Miami have made the city a primary gateway for Cuban art in the United States—leading Artprice to conclude that “from Miami to New York [and] from London to Paris, Cuban art is gaining in visibility.”