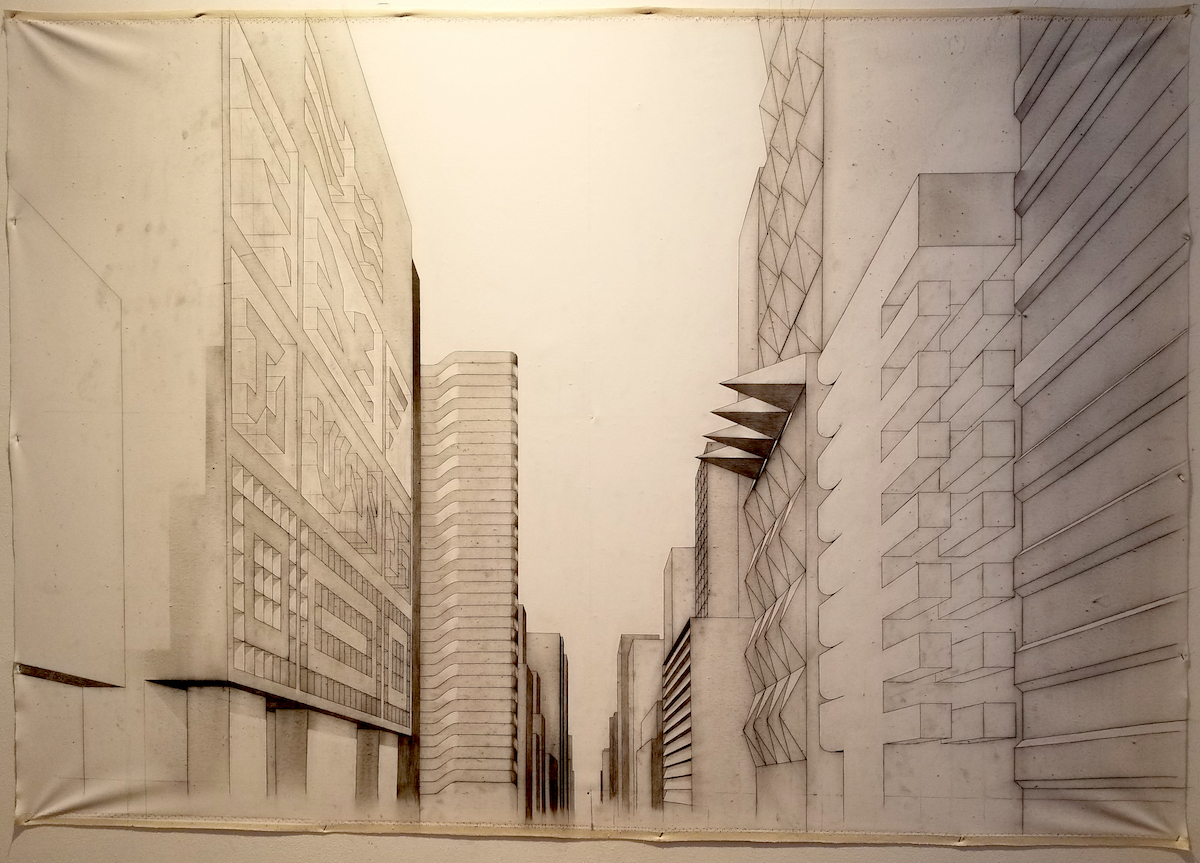 Glexis Novoa (Holguín, 1964) was already an accomplished artist when he left Cuba in 1993. A longtime resident of Miami, he now works in Miami and Havana, where he is scheduled to present a solo exhibition at Galería La Acacia next year.

Novoa is just finishing a two-month residency in Manhattan, coordinated by the Brooklyn-based organization Residency Unlimited, with support from the Rockefeller Brothers Fund and Cuban Artists Fund. Susan Delson recently visited Novoa in his Midtown studio for a conversation about art, inspiration, and working in New York, Miami, and Havana.

Along with your own art and your works in progress, you’ve got some signs made by homeless people on your studio walls.

I’ve been buying these signs in Miami, since the time of the crisis in 2007. I had them in my studio, on display like this. But I had a conversation with a friend, [artist] William Cordova, and he told me I was exploiting those people if I used those signs and then sold the art I made from them.

I said, That’s a good point. So I keep working with those signs around me, just to understand why I’m attracted to them, and how I can do something that’s not in conflict with my principles.

I started paying attention to the signs, the text, because I’ve been working with text recently—a lot. And also in this case I used this misspelled phrase, “RUFF,” on this piece now.

But you used a different word.

Yes. This is a drawing of the fountain Oceanus and the Three Rivers at the Rockefeller house by the Hudson River. I inserted it into this landscape that describes a very generic city.

Maybe the time of this fountain, this estate, is already gone. It’s only a reminder of that wealth. I think it fits perfectly with this text and what’s happening in the country and the world today. And the economy.

What’s the surface of the drawing?

This is canvas, graphite on canvas. When I work on the wall, I keep all of these little marks. Those marks came from the wall, so I keep some geography from the wall where I’m working.

In this case you can see so many accidents that are coming from the wall. It’s like a suggestion of some archaeology. At some point these pieces are going to be stretched and framed, so everything will be more geometric, and then these imperfections will be noticed.

I’m also doing this big piece that is a projection of this archaeology. It’s like a recollection, an archaeology of this wall—this building—in the specific. The title of the piece is E 51st Street & 3rd Avenue, NYC.

The whole drawing is a landscape. The top will be filled with these little details. But at the same time, I’m trying to represent all these elements that appear on the wall.

If you look from far away, this is a little bit inspired by those ancient Chinese landscapes that are very long. And there is some kind of abstract spirit behind it.

I’m talking about two different abstractions—like this mark here, for example, this long mark. This came from the wall. But at the same time I’m working on it. I’m creating a second language of abstraction with my gestures on top.

I’ve worked with abstraction before, but this is the first time that abstraction has had so much importance in a graphite drawing. This is one piece that I would say will define my stay here in New York.

The last time we spoke, you had a studio in Havana and were going back there regularly. Are you still doing that?

Yes, pretty much. I go to Havana, I don’t know how many times. It’s not exact. For example, in one year I might go seven times. Or in one month I could go two times, depending on what I’m doing.

As you know, I had a solo exhibition at the National Museum of Fine Arts in Havana in 2016. And now, during the Biennial [in April 2019], I have two different group shows. One is in the Orígenes gallery and the other in El Gran Teatro de La Habana. Both are official collateral events of the Havana Biennial. So I need to go there. And then I’m going to have a one-man show at the Galería La Acacia in June 2019.

What’s it like to work in both countries? How does it affect your art?

I wanted to ask you about these small colored pieces on the wall here. What is this?

This is a symbol that came from early Vedic texts, later adopted by Buddhism. It’s called Samsara. It’s a representation of life, like a wheel. You know, the good and the bad, the happiness and the sadness, one after the other. It’s the cycle of death and rebirth.

Is it a drawing?

Yes, a drawing on paper encapsulated in resin and in glass. It’s a found object.

Yes. And this glass. The resin is in the middle, like a sandwich.

This small work on its own wall—tell us about that.

It’s like a mouse, a computer mouse. But at the same time it’s like an animal, some kind of a mollusk—that’s the title of the piece, Mollusk. It’s looking at you. And dominating the space.

This is another drawing on marble. I did it in my studio in Miami. I call this piece Broken Bone. It’s graphite on marble and gold leaf—gold leaf in every broken area.

These are things you brought with you, to have around you in the studio?

I want them to be around, and to show to people. And the homeless persons’ signs. What I’m doing with the signs, I’m not defining that yet. Like I say, I’m just looking at them and thinking.

The experience of being in New York is a different approach to this subject. In Miami, you can see the homeless, but from your car. You don’t see them eating or sleeping very close to you, like you see in New York.

It’s really an interesting experience—an experience-in-progress, you know? Every day I take pictures of the same homeless people—how they move from one place to another.

In New York. Right here. Every day I’m taking pictures of the same cardboard that is being used for the same homeless that sleep here in this area. Every day is different.

I’m not looking to take a picture of the person, because I don’t like to be disrespectful of them. But you see the cardboard box, every day it’s different. You see different traces from the day before. Every day a home is improvised.

Overall, how has the residency been for you so far?

It’s really been enriching, and very dynamic. Residency Unlimited has provided us, the participating artists, with a lot of networking, a lot of connections with curators and studio visits. Between artists also. It’s not official yet, but I will probably come back in the spring to do a drawing on the wall in the Queens Museum, when they have the show Mundos alternos: Art and Science Fiction in the Americas. It was originally organized by UCR Arts at the University of California, Riverside, and it’s about science fiction in Latin American art. I have two pieces in the show, and the Queens Museum curator and I are exploring the possibility of adding my new drawing for this East Coast iteration of the show.

Glexis Novoa will talk with Marcela Guerrero, assistant curator at the Whitney Museum of American Art, in a conversation at Residency Unlimited on Tuesday, November 20, at 6:30 p.m.