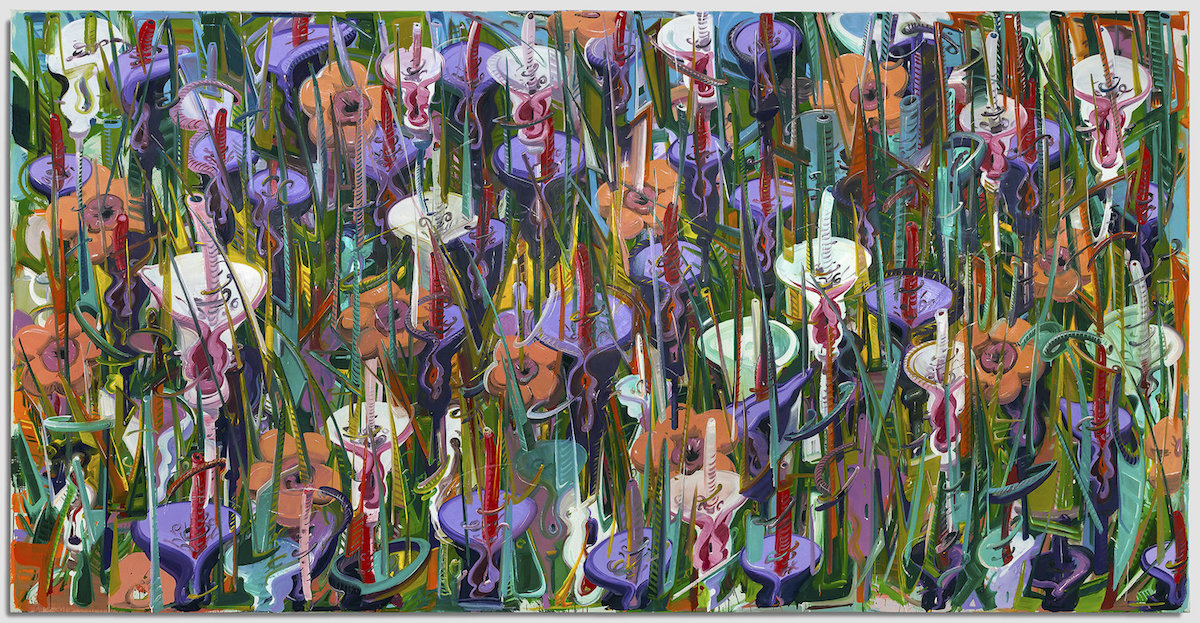 The fall season is in full swing, with openings & events in Havana, Florida, Bogotá, and greater New York—including Cuban artists at ArtBo, Pedro Pablo Oliva in Tampa, Edel Rodríguez on “Art as Change,” and a “liquid paradigm” opening at Factoría Habana.

Tomorrow in New Jersey: “Art as an Agent of Change.” He’s been called “the preeminent illustrator of the Trump era.” Acclaimed graphic designer Edel Rodríguez will address the New Jersey 11th Congressional District on art and society, tomorrow evening (October 25). The talk is part of a series called “Defending Democracy,” presented by the organization NJ 11th for Change. Details here.

CINTAS Award to Esson. In a Cuban Art News review of his spring 2017 show at Fredric Snitzer Gallery, Janet Batet wrote that Tomás Esson’s “indisputable technical mastery makes the contemplation of his work a delight, always. Paradoxically,” she continued, “both this pictorial ecstasy and its savoir-faire are inevitably shaken by the issues that the work addresses, with kitsch, scatology, and violent elements emerging as leitmotifs.”

The CINTAS Foundation also gave a Lifetime Achievement Award to Juan A. Martínez, Ph.D, professor emeritus in art and art history at Florida International University for his contributions to Cuban art and culture.

Last chance: Mendive in the Bronx. At the Bronx Museum of the Arts, the acclaimed exhibition Manuel Mendive: Nature, Spirit, and Body is nearing the end of its run. See it—or see it again—before it closes on Sunday, November 4.

Looking ahead: R10 in NYC. Trained as a graphic designer, artist Jorge Rodríguez Diez—better known as R10—creates eye-catching images that evoke the past while addressing contemporary anxieties. For his first New York show, the Thomas Nickles Project is presenting a pop-up show at Lazy Susan Gallery on the Lower East Side. The show kicks off with an artist talk on Saturday, November 3, at 5 p.m., followed by a reception at 6. Jorge Rodríguez Diez (R10): Apple in My Head runs through November 14.

And Oliva in Tampa. Some 45 oil paintings, watercolors, and works on paper drawn from private Florida collections will go on view at the University of Tampa in Pedro Pablo Oliva’s Cuba: Histories. Opening Friday, November 9, the presentation will include a fully illustrated catalogue in English, with critical essays and an interview with the artist. Oliva is also preparing a special-edition print series, which will be offered during the exhibition. The opening reception runs 7–9 p.m. on November 9. The exhibition runs through December 12.

Delgado in New Jersey. Opening November 16, Drawing Inventory: Then and Now showcases drawings by Ángel Delgado from the 1990s to the present. Created on surfaces ranging from handkerchiefs to toilet seats to gift bags, the works reflect a systems-based approach to artmaking. Curated by Alexis Mendoza, the show opens at the Union City Museum with a 7 p.m. reception on Friday, November 16.

Cuban art in “Doc NYC.” Cuban Canvas, the short film commissioned by the Kennedy Center in Washington, DC, for last spring’s Artes de Cuba festival, is coming to New York’s “Doc NYC” film festival. In the film, painter Roger Toledo Bueno visits with artists Rocío García, Manuel Mendive, Roberto Diago, and his contemporary Ariamna Contino as they discuss their work and their lives. Directed by Kavery Kaul, the film will be shown on Monday, November 12, at 5:00 p.m. and at 9:45 p.m. at the Cinepolis Chelsea cinema. Details here.

Capote in Vanity Fair. “Paranoia was my first encounter with the work of Yoan Capote,” wrote London journalist Fabien Fryns in Vanity Fair. “And it was love at first sight.” Read the profile here.

De la Fuente interviewed at Harvard. “Roughly 42 million African Americans call the U.S. home,” wrote the Harvard Gazette, “but 130 million people of African descent live in Latin America.” Alejandro de la Fuente, director of the Afro-Latin American Research Institute at Harvard, talks with the Gazette about the history of slavery in the Americas, the growing interest in Afro-Latin American studies, and its emergence as a social movement. Read it here.