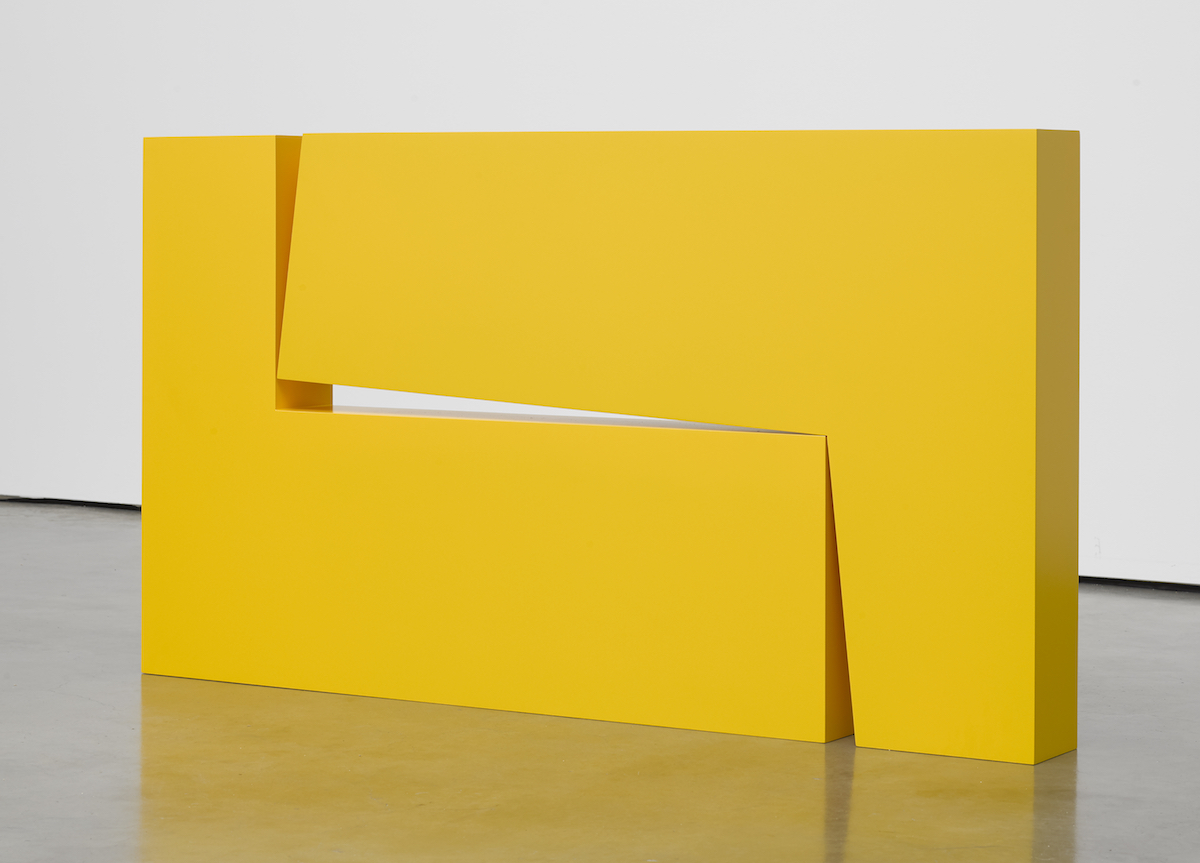 With her place in the abstract-art pantheon firmly cemented by the Metropolitan Museum’s upcoming Epic Abstraction: Pollock to Herrera, Carmen Herrera has unfurled a selection of wall-based and freestanding sculptures at Lisson Gallery in Chelsea.

The exhibition presents 13 of the works she calls Estructuras, or Structures, along with maquettes, sketches, and drawings.

Herrera began preparatory work on the Estructuras in the 1960s, and the show includes two untitled drawings from that decade. Both depict works that resemble sculptures in the show.

At the media preview for Carmen Herrera: Lines of Sight, the exhibition at the Whitney Museum of Art that opened in September 2016, curator Dana Miller commented that “we can see in the Estructuras and the rare drawings of the 1960s that many of her compositions, including her paintings, began with sculptural concepts.”

As a young woman, Herrera spent a year studying architecture at the University of Havana, and Miller also noted that “her early architectural training was essential to her way of working.”

With the 2018 CINTAS Foundation fellowship awards being announced tonight in Coral Gables, it’s interesting to note that Herrera’s second CINTAS award enabled her to hire a carpenter to help create her first wooden sculptural works in 1971.

The exhibition includes two rare sculptures from 1971: Amarillo Dos and Azul “Tres.” It also includes new painted aluminum structures—eight wall works and three works installed on the floor. Conceived as early as 1962, the pieces were executed in 2016.

The Estructuras are technically monochrome works. But Herrera envisions the white of the wall, revealed in the wall-based works’ negative spaces, as their second color.

Installed with generous amounts of space around them, the floor-based Estructuras extend a sense of architectural abstraction to the areas around them.

Next year, the gallery will publish a monograph of the entire Estructuras series, with an essay by Dana Miller. It will include rare archival material and unpublished sketches and drawings.

Over the past three years, Herrera’s work has steadily risen in the auction market. In spring 2015, an untitled black-and-white geometric canvas from 1952 surpassed its high estimate to reach $106,250 at Christie’s. (All prices quoted include buyer’s premium.)

Carmen Herrera: Estructuras runs through October 27 at Lisson Gallery. For more images of the show, see the photo album on the Cuban Art News Facebook page.