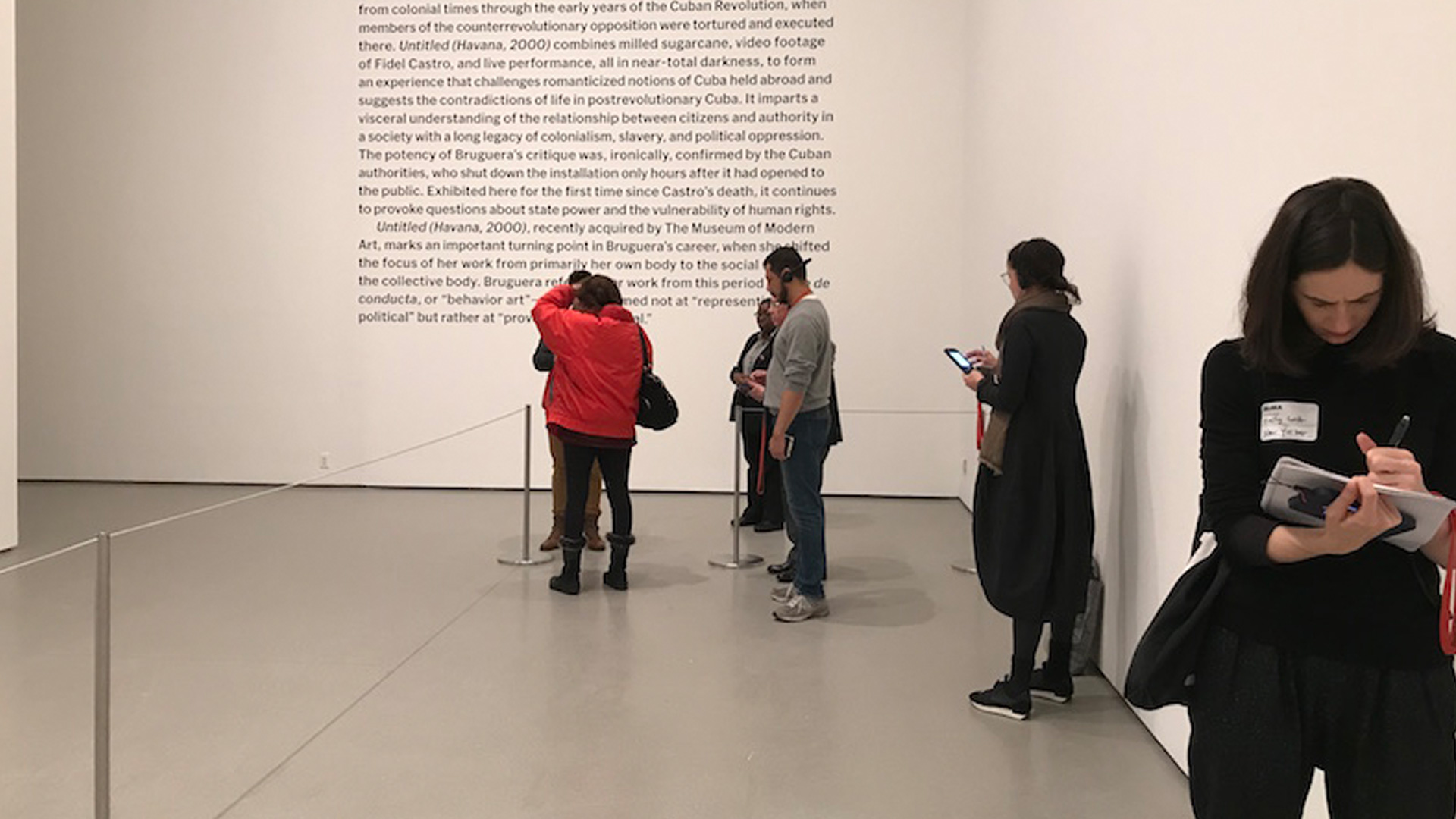 Bruguera’s performance installation was first presented in 2000 as part of the 7th Havana Biennial, in a fortress that had been used as a prison since colonial times. In 2000, it served as a Biennial exhibition space.

Not quite 18 years later, Tania Bruguera: Untitled (Havana, 2000) is a meticulous reconstruction and re-performance of the work, presented at a prestigious museum in New York.

At a media preview last week, Bruguera spoke with Stuart Comer, chief curator of media and performance art at MoMA, and Peter Reed, the museum’s senior deputy director for curatorial affairs. (The full conversation is available on video here.)

The conversation offered insights into the work and its presentation at MoMA, as well as the process of bringing a radical piece of performance art into a major museum collection and situating it in a broader art-historical context.

Stuart Comer began by noting that he had seen the original Biennial installation before it was closed down by the authorities. “It never left me,” he said. “I continued to dwell on this piece for a very long time.” The museum purchased the work in 2015.

Comer went on to say that Bruguera emerged from “a very rich legacy of performance in Cuba,” pointing to Cuban-born artist Ana Mendieta as an important precursor and influence.

“But having come out of a career in which most of her work was focused on her own body,” he continued, with Untitled (Havana, 2000), Bruguera shifted “to a more social encounter, opening it up to a participatory experience for the visitor—where she herself is no longer the performer. It was instead almost like a tableau vivant.”

At MoMA, viewers entering the work are immersed in darkness. “But you’re hit with a very powerful smell, of what you begin to realize is rotting sugar cane bagasse, which is the remnants of the milled sugar cane,” Comer explained. The floor of the installation is covered in bagasse.

Cuban artists across a range of media have drawn on sugar cane as subject and symbol, from Wifredo Lam—who used it in the background of his 1943 canvas The Jungle, also in the MoMA collection—to playwright Carlos Celdrán (10 Million) and photographers Iván Cañas and Ricardo G. Elías.

“As you begin to walk into the piece your eyes start to adjust and you realize that there is one light source, which is a television monitor in the ceiling, with found footage detailing [Fidel] Castro both in private and in public life—swimming in the sea but also giving formal political speeches,” said Comer. “There’s a crucial moment when he removes [opens] his shirt to reveal his bare chest to prove that he doesn’t need a bullet-proof vest, that he is invincible.”

“In contrast to that, you begin to realize that there are four performers who stand naked around the monitor, almost as if they’re guarding it.”

“In an era of Instagram and hyper-visibility,” Comer said, Untitled (Havana, 2000) “really does take a very different approach.” The work “forces us to slow down and think as much as we’re trying to look, and to begin to experience on a more sensorial level.”

Asked why the performers are all men, Bruguera said that it was important to emphasize the machismo in Cuban culture of the time. “At least then, there was no role for women,” she said. “All the heroes are men. The few [female] heroes we have are the wife of, or in the second or third layer.”

Traces of that machismo surfaced in the search for performers. “I know that it was hard for some Cuban males to have a woman saying ‘I want you to be naked, and doing this and that.’ That was a bit intense for some people,” she said with a small laugh. “They didn’t make it to the last round.”

Comer and Reed offered additional art-historical references, from ancient Roman depictions of Atlas to A Subtlety, Or the Marvelous Sugar Baby, Kara Walker’s 2014 installation in the Domino Sugar Factory in Brooklyn. In that work, a monumental black female sphinx, apparently made of sugar, was accompanied by smaller attendant figures.

“As we continue to attempt to construct a history of performance art and what performance means after its original iteration,” Comer said, “it becomes clear that some projects”—like Untitled (Havana, 2000)—“can and should be restaged, and other things really function better as documentation. This is a major difference from other art forms. A painting is a painting, and you need to see it—it’s not a matter of restaging it.”

“I’m very interested in what it means to represent history through a living situation rather than a recorded image,” Comer said. With the acquisition of Bruguera’s work, MoMA’s media and performance department is looking to create “a new protocol for how you inscribe the history of the piece in the collection here.”

Bruguera pointed out that, like the work itself, MoMA’s documentation for Untitled (Havana, 2000) is multisensorial.

“Not only do we have the data of the original place, the images of the space, the dimensions, et cetera,” she said, but videos and texts for the performers to read, to understand some historical data in general.From Havana, Bruguera herself sent back photographs of the walls in the original space, which were replicated in detail.

“What’s not broadly known is that the kind of sugar cane that you encounter on the floors—the industry has moved far beyond that process, and it doesn’t really exist anymore,” said Comer. The exhibition’s head designer spent two weeks in Florida locating a source for this type of sugarcane bagasse. “He found a group of old men who were still doing it, almost by hand practically, with these funky old machines. We’ve got great documentation of that trip.”

“We also are giving the performers the opportunity to record some of their experiences,” said Bruguera. “Some memories, or data in terms of the [performative] gestures—stuff that in the future maybe can help the performers when this is done [again].”

Only four visitors are permitted in the work at one time, inevitably leading to a wait. For Bruguera, this is an essential part of the experience. In Cuba, she said, “for 50 years we have been doing long lines for crazy simple things. I think this idea of people going through waiting is very important to the meaning of the piece.”

She also feels strongly that viewers should take the piece on their own terms. “Many times we have this tendency to be patronizing to the spectator—everybody has to see the same thing, everybody has to have the whole experience,” she said. “In this piece I discovered that as in politics, as in difficult experiences, not everybody wants to go all the way.”

In 2013 and 2014, when Bruguera and Comer started talking about bringing the work to MoMA, “I was a little nervous,” she said, “because I felt the conditions in the United States were very different.” In the current sociopolitical climate, she said, “I’m very excited that the piece is being shown now. It’s a reminder that things that happen in one place can happen in another.”

For Bruguera, the most important aspect of the work’s documentation “is recording the experience of Cubans who come here and have a reaction and leave something.

“For example, I did a piece a while ago where I used some reference to Auschwitz. And I was sadly depressed that some people in the exhibition were like, ‘What is that saying?’ People didn’t recognize the sign [over the entrance to Auschwitz, which reads Arbeit macht frei (Work sets you free)].

“That made me think, okay, historical memory is erased. Sometimes for good reason. But we should never forget. And that’s what we’re trying to preserve here—not only how it looks, how it smells, but also the emotional memory.”

Tania Bruguera: Untitled (Havana, 2000) runs through March 11 at the Museum of Modern Art, New York. The installation is closed for maintenance on Mondays.

This coming Friday and Saturday, February 9 and 10, Bruguera will join with the MoMA Education Department to teach a two-day workshop on Arte útil (Useful Art). Information and registration here.