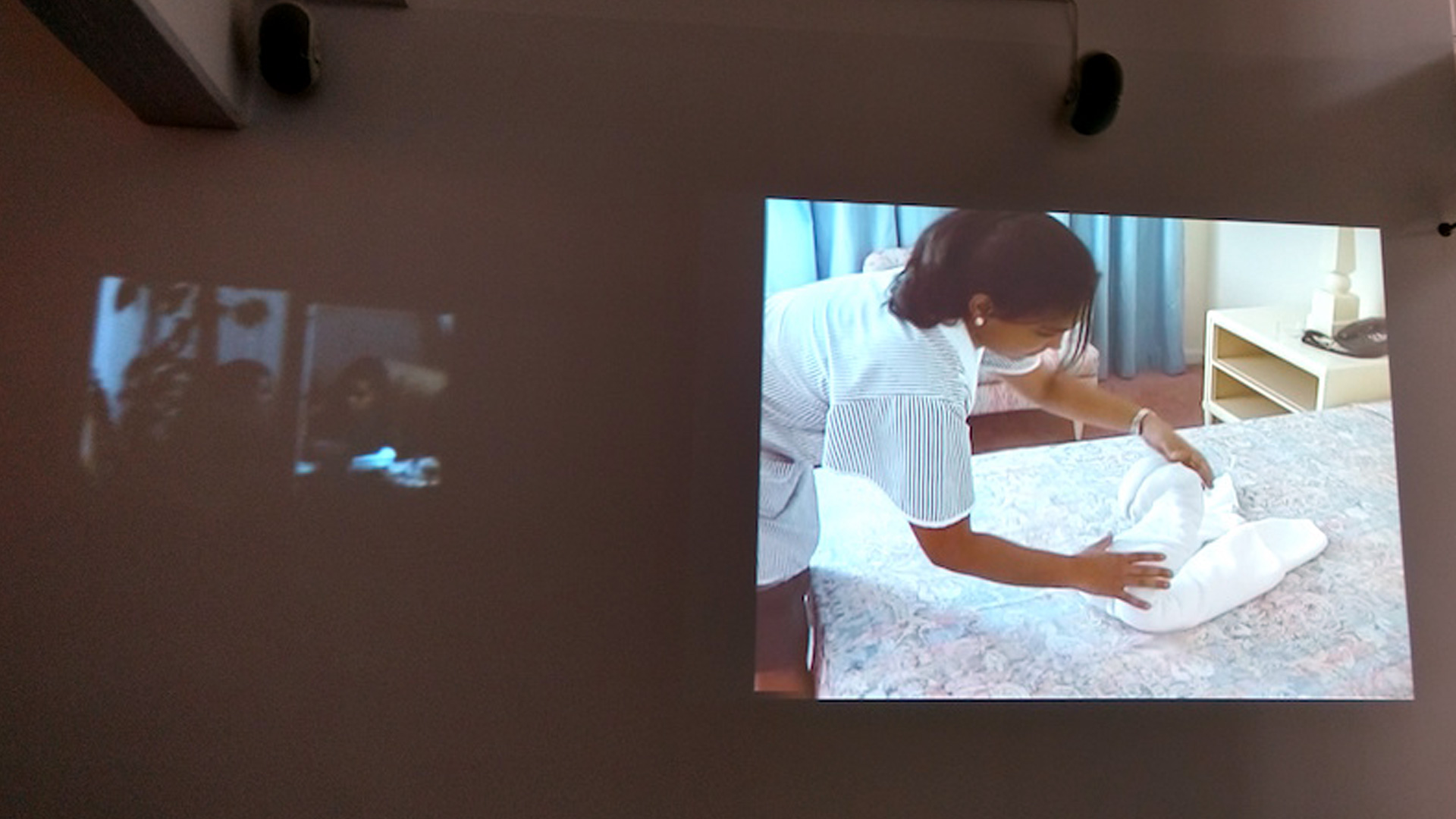 The exhibition Art x Cuba: Contemporary Perspectives since 1989 opened last month at the Ludwig Forum Aachen in Aachen, Germany. In an email interview, co-curators Andreas Beitin and Tonel (Antonio Eligio) talked about the show and the trajectory of contemporary Cuban art.

What is the primary idea behind the show?

Andreas Beitin: The general exhibition concept is to contrast the Cuban works of the Ludwig Collection—one of the first and largest collections of contemporary Cuban art in Europe—with current works.

This not only makes 30 years of Cuban art history clear, but also makes its development very evident. We can see the expansion of the media, the differentiation of topics, and the stringency of motifs that have played a role from the 1980s to the “Special Period,” and up to the present day. These motifs range from iconographic elements like the island and the machete, to shifting representations of the male and female bodies, to a focus on specific communities and segments of Cuban society, to a critical commentary on the role of mass media and propaganda.

Why does it make sense to take this approach at this moment?

Tonel: It has been more than 27 years since the show Cuba O.K. opened at the Kunsthalle Dusseldorf, claiming the attention of Peter and Irene Ludwig. They started their collection of contemporary Cuban art by acquiring many of the works exhibited there.

In the decades since Cuba O.K., the Ludwig collection was exhibited as a whole only minimally. And rarely was it displayed in a dialogue with Cuban art created after the years when the German collectors were more engaged with Cuba (roughly, 1990 to 1996).

We thought the time was ripe for a review of this collection—which, it would be fair to say, holds quite a few works that, seen today, can be considered classics from the early 1990s. And also a good time for a comprehensive gathering of works that would give German and European audiences a more accurate—even if partial—picture of the developments in Cuban visual arts since the late 1980s and up to the present.

How does the physical presentation of the works create the sort of comparisons you’re interested in? Could you give us an example of a group of works that the show presents together?

AB: At the beginning of the exhibition, we have a face-to-face presentation and comparison of a large painting from the Ludwig Collection, titled Triptych (by Tanya Angulo, Juan P. Ballester, and José A. Toirac of the group ABTV) and Mass, a new photographic work by Adrián Fernández.

The painting, from 1990, shows, among other things, a reproduction of a photograph taken from a Granma newspaper, of Cuban soldiers who have come home after a successful operation during the Angolan civil war, in which Cuba was involved [in the 1970s and again in the late 1980s and early 1990s].

The Caribbean state was in a bad economic situation at the time [during the Special Period of the 1990s], and we can infer that the newspapers wanted to distract the attention of their readership from internal problems and point out to the successful military deployment abroad—a well-known tactic. So the painting underlines the impression upon or manipulation of the masses.

This multi-part painting is juxtaposed with Fernández’s large-scale photography. In Mass, Fernández has appropriated a motif from a postage stamp, depicting a large crowd of citizens gathered at the Plaza de la Revolución, probably listening to one of Fidel Castro’s speeches.

Over the course of more than 25 years and beyond, in the media of painting and photography, both works deal with the same phenomenon: the representation of the masses, and the mediation of mass media and propaganda in the creation and dissemination of certain images. The resulting comparison offers an impressive entrance into some of the themes and issues that the exhibition put forwards from this point on.

When you installed the show and saw the works in the space, did you discover any new relationships that you hadn’t anticipated? Any other interesting discoveries?

T: In my experience, most curatorial projects take their final shape, conceptually speaking, only when the show is installed. I think this show was no exception to that rule. So the answer is “yes” to the first part of your question.

The exhibition has been displayed in a way that suggests thematic continuities as well as contrasts, and dissonances of all kinds. In terms of relationships, I could give you a couple of examples.

We decided to favor a proximity between works by Wilfredo Prieto (Hero), Jeanette Chavez (Change of State), René Francisco and Eduardo Ponjuán (Utopia), and Alejandro González (his series Mi Cayito… and AM-PM). When playing against each other, these works question and expand the notions of the hero and the heroic in surprising ways. (Including “anti-heroes,” who in this context could be the gay men and transvestites in Alejandro’s striking photos.) They take the viewer into a journey that encompasses history, social change, sexuality, politics, drama and humor.

There is another section of the show that embraces architecture, urban environment, and the inhabitants of cities and neighborhoods presented in the midst of their habitat.

Seeing those works together (by Kattia García Fayat, Ramón Pacheco, Manuel Piña, Ernesto Oroza, Felipe Dulzaides, Tony Labat, Juan Carlos Alom, and Javier Castro, among others) is one of the highlights of the exhibition, in my opinion. It is like listening to a visual choir that, with almost no previous rehearsal, has come together to achieve the perfect pitch.

Based on the show, how would you describe the differences and similarities between earlier Cuban art and the Cuban art being made now? Do you see a developmental trajectory over the past decades?

AB: In my opinion, the biggest difference is in the expansion of the media. Whereas painting and sculpture dominate in the earlier works, there are many videos and photographs, as well as sound and media installations, among the most recent works. All in all, the art has become more global, through greater freedom to travel and the possibilities of information via the Internet, whatever that means.

It also presents topics that did not play a role 30 years ago, such as homosexuality or militarism.

Similarities are more likely to be found on the level of motifs or content—like the machete, which is a key instrument for Cuban culture; the sea, which promises freedom as well as demarcation; or the links between works that deliberately make use of kitsch.

If there has been a developmental trajectory, it is in the direction of a connection to a global artistic concepts and aesthetics.

T: It might be important to clarify that the artists whose works are part of the Ludwig Collection are almost exclusively represented in the show with “historical” works—that is, works that come from the collection itself.

Also, it should be clear that, even though the exhibition is the result of careful research and is intended to be very comprehensive, it has not been conceived as an anthology. Nor is it designed as a survey.

We are dealing to a great extent with an art production that is alive and well, constantly moving and shifting. Our exhibition is a snapshot—one with a focus on certain topics and issues, but also conceived from our particular limited perspectives as art historians and curators.

Finally, we should mention that we are working on a publication related to the show. We hope that this will be a significant book, printed in German, English and Spanish. It will  offer a variety of perspectives on Cuban art and culture, with essays by authors and scholars like Luis Camnitzer, Aviva Chomsky, Sujata Fernandes, Orlando Hernández, Par Kumaraswami, Jacqueline Loss, Rachel Price, Eugenio Valdés, Elsa Vega, and Roberto Zurbano, among a few others. It should be in print this winter.

Art x Cuba: Contemporary Perspectives since 1989 remains on view at the Ludwig Forum Aachen through February 18.