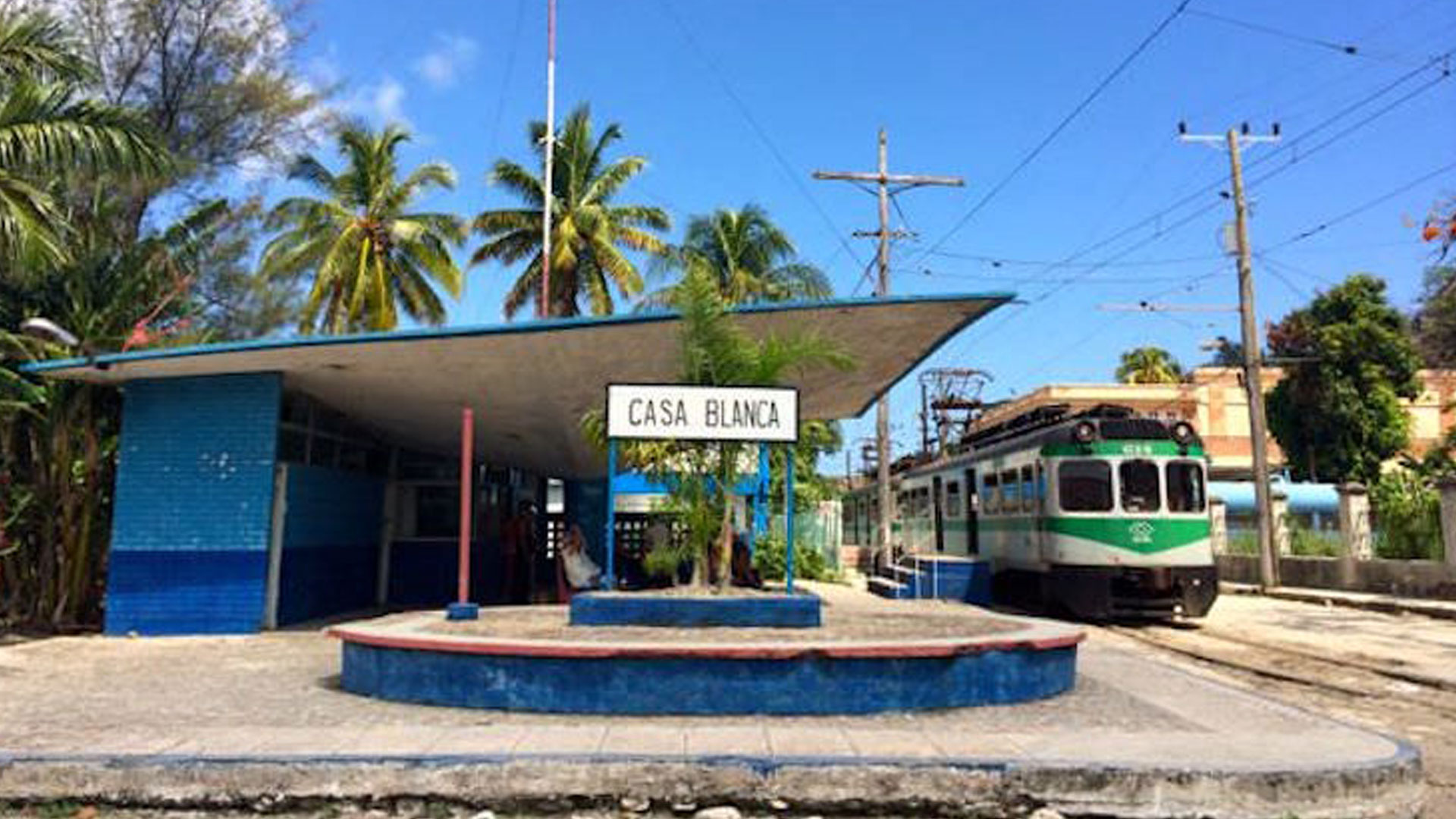 Across the harbor from the Old Havana district, there is a small seafaring settlement that shares a hill with a fortress that is a UNESCO World Heritage Site. Known as Casablanca, this settlement is home to one of the four largest sculptures of Christ in the world, and a still-functioning electric train of early 20th-century vintage. It affords the most breathtaking views in all of Havana, and the city’s steepest topography.

The easiest way to get to Casablanca is by ferry, the lanchita de Casablanca. You catch the boat at the Luz ferry pier on Avenida del Puerto, and minutes later you are immersed in a place of quiet, local atmosphere, far from the capital’s bustle.

In its layout, Casablanca tries to follow a traditional urban grid but doesn’t quite succeed. Sinuous paths and steep streets combine with narrow alleys. Along its slopes, stairways and unexpected curves surprise the wanderer.

Architecture here is modest and vernacular, and its visual integrity is marked by irregular profiles and terraces at different levels. Houses are mainly one story, with larger ones occasionally interspersed with empty lots and alleys.

The most important street, Calle Artes, still retains some older buildings, such as the Lavale House—a jewel in a perilous state of disrepair. But by far the greatest strength of Casablanca is its cohesive urban fabric, which makes it dueña de su entorno paísajístico, “the owner of its own environment.”

Despite its being so close to Old Havana, few visitors enjoy a trip to Casablanca, or know its unique history, which goes back to the earliest colonial period.

As far back as the late 16th century, the area was home to a warehouse of the Royal Treasury and Marina. Because it was always painted white, the hamlet that grew around it was named Casablanca. Known as el cerro de la cabaña, the hill of la cabaña, this area offered excellent views of the young Cuban capital. Nearby, at the entrance to the channel, stood the Castillo del los Tres Reyes de Morro, then the most important fortification in Havana.

Highly coveted by foreign powers, Havana was attacked and captured in 1762 by an English squadron that took advantage of the unprotected part of the hill to gain entry to the city. Within a year, the Spanish had taken Havana back and the hill was fortified with la Fortaleza de San Carlos de la Cabaña (1774), the largest Spanish fortress in the Americas.

The presence of the Fortaleza drove the development of the nearby hamlet. Warehouses, woodworking centers, docks, and workshops sprang up, and the number of homes increased. Casablanca and La Cabaña began to share life on the hill.

In the mid-19th century, what had become a town of laborers and fishermen experienced another boom, again linked to Havana and its port. The land rose in value, new houses were built, and community services increased. Commercial fish nurseries were built, new roads connected Casablanca with other settlements, and regular transportation was established to cross the bay. By 1851 Casablanca had become an official part of the capital.

In 1855 came the establishment of its first parish church. Its current iteration, dedicated to the Virgen del Carmen and built between 1893 and 1898, was the last one constructed in 19th-century Havana.

Casablanca’s real flowering came in the early 20th century. By this point, postal delivery, long distance telephone, and a telegraph stationhad been established. There was a polyclinic for medical consultations, a fire station, beautiful homes on the hill, and finally, in 1908, a National Observatory.

In 1909, an iron bridge was proposed, which would have connected the two sides of the harbor channel.The project did not happen, but the idea of turning Casablanca into Havana’s Brooklyn highlights the importance the region had at that time.

In 1911 a system of steamer boats made trips from Casablanca to Havana, transporting merchandise, construction materials, passengers, and funeral processions. There was even a floating cabaret. By the 1920s, motor boats began to operate on the Caballería and Luz docks.

Casablanca’s greatest rise to prominence came with the establishment of the Hershey Train in 1922. A product of the first sugar mill to use electrical tracks to bring cane to the factory and sugar to the port, the Hershey Cuban Railroad’s tren eléctico ran from Casablanca to Matanzas, carrying passengers, cargo, and mail. It is the only train of its kind in Cuba, and it is still in operation. It passes by the remains of the old Hershey sugar mill—later named the Camilo Cienfuegos mill—which was partly dismantled in 2002.

Casablanca’s festivals are legendary. The most popular honored el día de Carmen, the area’s patron saint. Celebrated on July 16, the event used to begin the night of the 15th with games, competitions, and parties in the park. The following day, there would be a procession through town and along the bay, carrying the Virgin from the church to the the emboque de Casablanca. The area was busy with kiosks, and at night there were fireworks. This tradition lasted until the 1960s and even now, older Cubans remember it fondly.

The region’s most distinct feature is the Cristo de Casablanca, a 59-foot-high white Carrara marble sculpture that overlooks the historic center. Carved by Jilma Madera, a Cuban sculptor who won the commission in 1953, this colossus was inaugurated by President Fulgencio Batista on December 25, 1958—just days before the revolution triumphed and he fled the island. The figure’s right hand rests on his chest, while the other, outstretched, blesses Havana.

The view from the Cristo is spectacular—both modern and historic areas of the city, with the changing light casting a spectrum of color on the panorama below. The city is seen from on high, as if from a balcony: the cruise ship terminal, the Castillo de la Fuerza, Morro Castle and the lighthouse, the sinuous Malecón up to El Vedado, and the panoramic sea view that underscores the maritime character of Havana.

Its distinctive landscape and proximity to the historical center of Old Havana make Casablanca a privileged place. These days, though, Casablanca is largely characterized by a lack of maintenance. The current proposal to revitalize the port and the Habana Vieja district may change all of that. The project proposes to adapt old buildings along the port for tourist use, and to move active industry and manufacturing to the port of Mariel.

This proposed creation of the most important cruise terminal in the country has the potential to unleash gentrification upon Casablanca. That could either displace its current population, or promote harmonious development—awakening and revitalizing the region, elevating the standard of living for current residents, and reaffirming Casablanca’s traditional relationship to the other side of Havana harbor.

Casablanca is at a turning point in its history.