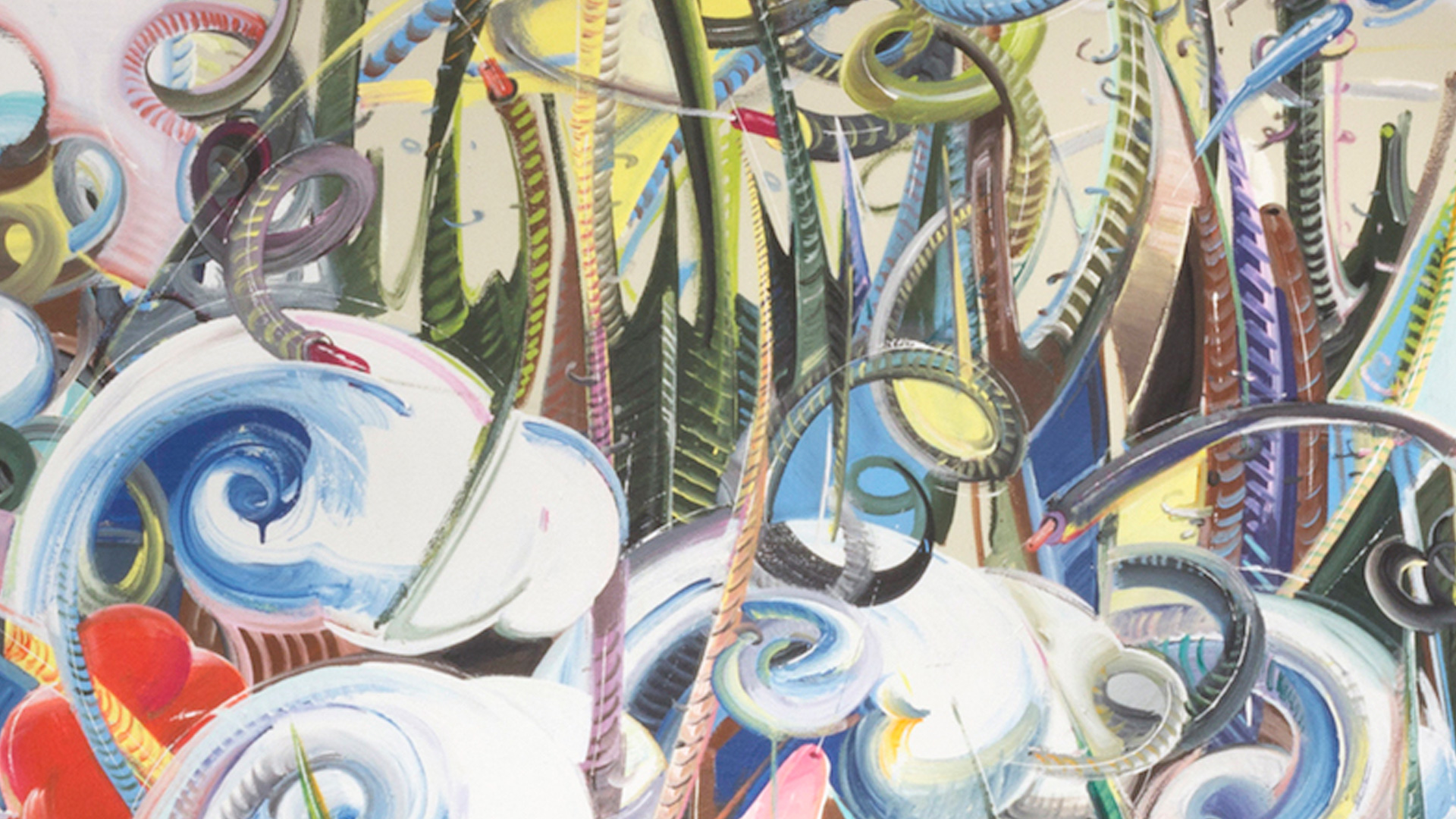 Janet Batet surveys the art and career of Tomás Esson, and the tormented, mythological beings, erogenous plant life, and other motifs that populate his art, including the show that just closed in Miami.

Miami Flow is the title of Tomas Esson’s latest solo show, recently presented at Fredric Snitzer Gallery in Mimai. The concise and at the same time exuberant exhibition includes six colossal paintings and an installation, composed of a series of drawings from the series Wet Painting. This work goes beyond the physical limit of the frame to become an immersive installation that overflows its boundaries.

Tomaás Esson Reid (Havana, 1963) is undoubtedly one of the most forceful painters in contemporary Cuban art. Esson`s indisputable technical mastery makes the contemplation of his work a delight, always. Paradoxically, both this pictorial ecstasy and its savoir-faire are inevitably shaken by the issues that the work addresses, with kitsch, scatology, and violent elements emerging as leitmotifs Esson’s pictorial entities are visceral portraits of that caged anguish that is human existence: vulvas, penises, jars, ejaculations, spit, pubic hair, and indescribable beings who share the tormented condition of beast and demigods, simultaneously animals in heat and spiritual beings.

Graduating from the Institute Superior de Arte in 1987, his show A Tarro Partido II, also known as ESSONSISEHACE, shook the permissive limits of puritanism and political power in Cuba, while clearly laying out the then-young painter`s course of the work: crudeness of political and sexual signs imbricated in a personal hermeneutic and incarnated in the talisman, that unique archetype summarized in flesh and teeth that would accompany the artist`s work forever.

Although centered on Esson`s most recent series, whose name lends its title to the show, Miami Flow includes works from other series that function as a necessary complement to complete the artist’s complex universe. Over the years, Esson’s fertile universe has been composed of parallel series which, as platforms of communication, interweave and nurture one another. Such is the case of Portrait No. 6, 1995, which allows us to delve into that particular bestiary that are Esson`s portraits.

From a young age, Esson ventured into the genre of portraiture that has enabled him to penetrate into the psychological character of the insular idiosyncrasy of the moment. Towards the end of the 1980s, the subject of portraiture allowed the artist to explore a new entity that came to obsess him: the mythological being, half-human and animal in nature, whose intentions are definitely not toward the Empyrean heights of heaven but toward the earth. His figures, always dignified, are also highly stylized. In many cases a low-angle perspective dominates the composition, foregrounding belly and genitals and relegating a diminished status to the much smaller head, crowned by horns. In these portraits of Esson’s, where reason surrenders to the visceral, the treatment of the flesh is worthy of Rubens, and the erogenous component of these figures is primordial.

Wet Painting, #54, 1998, and the installation of the Wet Drawing series, 2017, allow us to delve into those vital series, Wet Painting and Wet Drawing, that Esson has been working on since the 1990s. In these series, the talisman is still present, unfolding in what for Esson are the five fundamental elements of human life: vagina, breasts, mouth, anus and penis. The wet quality is a sine qua non of this erogenous pentagram, which loses all gravitational center. Like an ivy vine, it reproduces wildly, jumping the frame of the picture and seizing the walls of the gallery in an uncontrollable orgy. In these series, Pop art, and the presence of another great of Cuban artist, Umberto Peña, are fundamental.

Beach, 2016; Cachumbambé, 2016-2017, and Oracle, 2017, are the pieces in the most recent series, Miami Flow. Brimming with the entities that have characterized Esson`s works, in this series the human figure seems to be transfigured into a vegetal element. Exuberant biomorphic landscapes incorporate the “all-over” effect so dear to American expressionism. The colors of this series are definitely taken from previous series, such as Wet Painting, where the palette was determined by what Esson called “fleshy colors”—that is, limited to colors directly associated with the human body and the five elements that make up Esson`s erogenous pentagon.

Now, however, the colors are dominated by the pastels of the South Beach palette created by Leonard Horowitz. A central focal point is banished; instead the eye is made to jump from one spot on the canvas to another, in a banquet of incomplete forms. The notion of fluidity associated with this series has to do with its sensual and unstable aspects: the flower, or vulva, is built up as the central elelment, with vines, stems, and pistils (hair) as secondary support.

Oracle, 2017, is a colossal piece that invariably brings to mind two essential works of art history: Monet’s Water Lilies series and Lam`s The Jungle, 1943. The landscape has both the quietude and pleasing color of the first and the voracity and exuberance of the second, which transforms its psychic state. Although Beach and Cachumbambé were made with industrial paint, in the case of Oracle, Esson returns to oil paint, the better to focus on the chromatic and luminous quality of this piece.

Miami Flow is a solid show of undeniable beauty that heralds new paths in the career of this great Cuban artist.