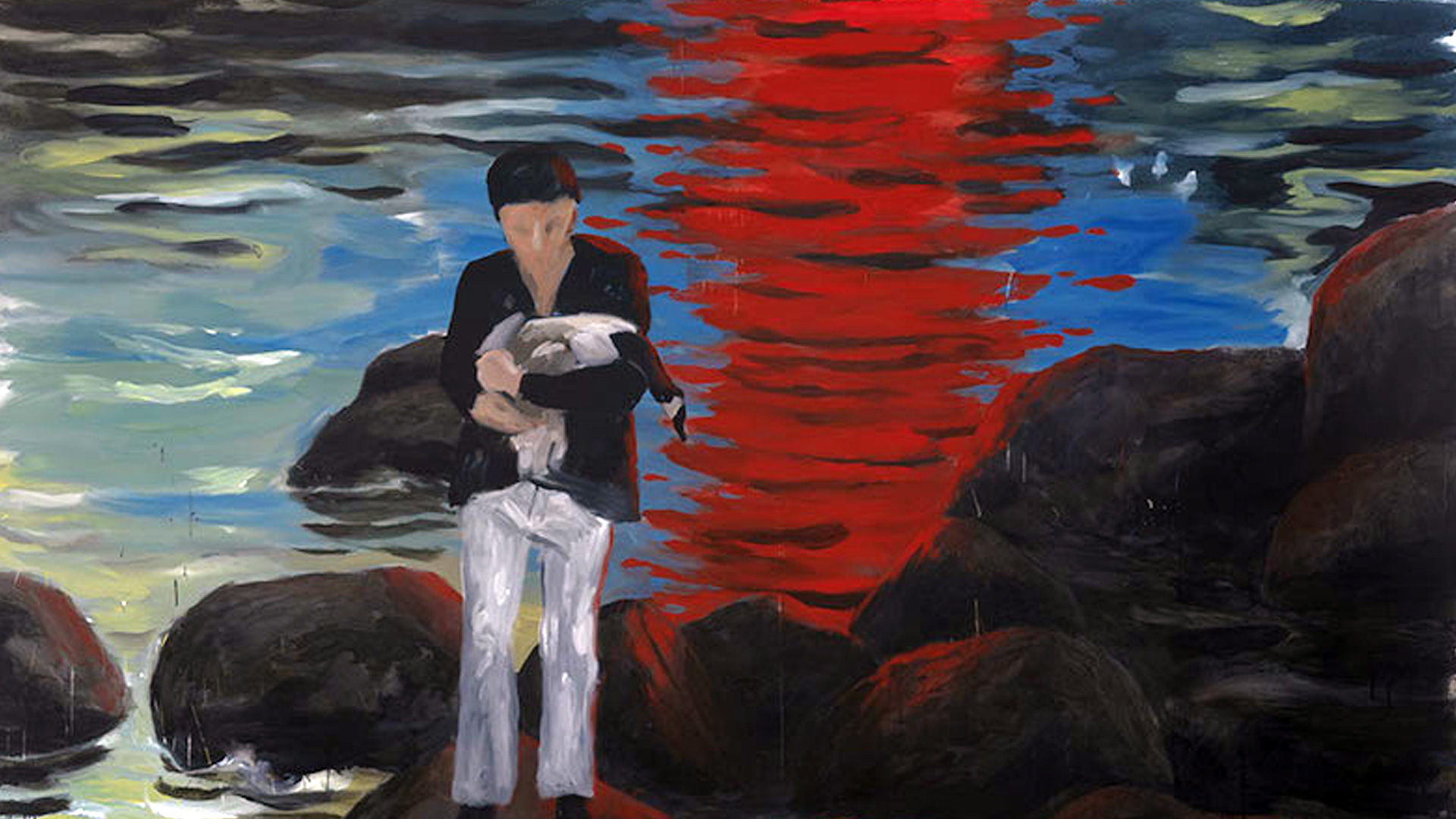 Earlier this month, Enrique Martínez Celaya: The Gypsy Camp opened at Jack Shainman Gallery in Chelsea. In a wide-ranging conversation in the gallery (edited for length), the artist talked about the challenges of painting, why his work isn’t really figurative, and a possible project in Havana.

Are these new paintings? And did you make them with this particular space in mind?

I always make a new body of work for each exhibition. I create a model [of the space] early on, and I begin to work with that particular space. Of course, changes are done at the last minute.

These three works are joined together by having the image of the boys. But what’s happening in addition is the question of the scene and what it is, what the patches are. Even that movement around of the text problematizes the reading of the paintings as scenes. But by encountering them one after another, you have the opportunity to see something that exists beyond each individual work.

A sort of a narrative, but very elliptical.

It is. Because they are recognizable images of the landscape and the figure, the tendency is for people to want to think of it as narrative and figurative. I myself never do.

You don’t think of them as figurative?

No, no. They may include figures but they’re not defined by them. I think of the work as an inquiry. The philosophical and emotional concerns that I’m after have this reference to images—to these figures, or to the stairs. But in the next body of work, it might be language, or something else.

This one [The Folktale, pictured above] has stairs that are painted in a particular way, like fake marble. And birds. But that in itself is not the [end goal] of the work.

I think of this as an exploration that is very interested in what a painting is. Conceptually, how a painting is held and captured. Like how the edges of the painting are incomplete. How something like this gets introduced into a scene and problematizes the sense of this as a vista into a certain world.

And how there are all these other pieces of information, reminding you constantly of the undermining of the painting as a construction—whether it’s the drips or the markings. I’ve tried to approach authenticity from this point of view.

For instance, a painting like this starts with an image of my mother as a 16-year-old, as a young woman. And it has this carousel. When people talk about the work, they will talk about those two things.

The painting took two and a half years to make. Because what I am trying to do is create these tensions and balances that allow this painting to exist as a painting.

Take the composition. Even though my paintings change all the time, this one didn’t change very much. I wanted this thing here [gestures to the lower right of the canvas] to give a sense of light, but also a sense of paint. The fact that this is a tunnel that goes into space, but also I want to flatten it out—to not lose the picture plane.

So the balance of those forces, and painting and repainting that face to come to terms with everything that is happening emotionally to that painting will take years. And ultimately, that’s what I think defines a painting.

But the tendency, when somebody comes to it, and reads it as a figurative painting, is to imagine the story between the girl and the carousel.

But everything else that’s happening—the gross treatment of that [the area of wall by figure’s shoulder] and the funkiness of that paint, and the lack of satisfaction of that rendering there, or the painting of her head and the correction—those near-misses, all of that is the energy and the activity of the paint. Those things are really what I find the challenges of painting to be, and that make the whole process exciting for me.

A painting like this one, for instance, had completely different images when I started it—which I needed, to get a certain investment of direction into what the painting was doing. At the end, here’s where it is after a year and a half of work, painting and repainting it.

So the figure is holding a large…vase?

It’s actually holding a very crudely painted jewel—a jewel the way a child might remember a jewel. There’s something about paint moving and trying to articulate the sense of objects—I’m interested in that failed illusion.

In other ways, the paintings create a certain thing and then it’s undermined. That’s very much at the heart of what I’m trying to do.

I think it’s partly because I was trained as a scientist as well as an artist. When you go to do a scientific experiment, you don’t know the answer beforehand.

What does your Cuban heritage or your Cuban identity have to do with your art?

It is an important question that has not been given enough space in the critical writings that have been done on my work. Because either people assume that it’s obvious, because I’m Cuban, or they say, these are Nordic-looking paintings and they completely forget about it.

I was in Cuba until I was seven. And the sense that permeated my life after we left Cuba was the sense of a world that existed only in memory, from that moment on. That existed only as references, and the regret and the longing that came with all those memories.

I think that had a profound influence on me. But I found more resonance in continental philosophy, Nordic writers, the American transcendental tradition. I was finding more resonance with my own interiority and the way I was.

Even in my teenage years, my paintings did not look very Latin. But I think [it is reflected in] some of the concern with the nomadic quality of existence, like a gypsy camp—the title of this show—and this sense of displacement that exists in the work. How we contend with regret, and so on.

I think there’s a lot of Cuban inheritance in that. But the artistic traditions I’m connected to are more Nordic and more American-European. That provides a complicated sense of what kind of Cuban I am as an artist. But undoubtedly, it is there. When I think of my mother as subject matter, for instance, it’s difficult not to think of Cuba—this 16-year-old girl launching herself into this tunnel of what was to come. And I think that’s a typical Cuban story.

There are many different kinds of Cubans. My grandfather was from southern Spain, so he was one of these Cubans who were very stern and quiet and silent—very different from the flamboyant Cuban that is stereotypically seen as Ricky Ricardo [from the 1950s television series I Love Lucy] or something like that.

Some of the severity and austerity in some of my paintings, which people attribute to Nordic tradition—there’s a Spanish part of the tradition, Velázquez and people like that, that are some of the most stern painters in the European tradition. The Catholic compression of emotion.

Those things are in my work but people don’t understand the connections.

Until very recently, of the 40-something museums that own my work in the US, only one was bought by a Latin American curator. It was always European or American curators. Even though, as we were saying, so many of these things are connected [in my work].

When people ask me about the connection between Latin American art and mine, I have very little to say about the visual arts, but I have tremendous connection with the literary tradition.

In my teenage years, even though I was painting all the time, I was reading literature more than anything. The Latin American boom—Cortazar, Vargas Llosa, and poets like César Vallejo and Nicholas Guillen—that was how my artistic sensibility got shaped. It was really through writers. It still is—I relate to writers more.

García Márquez, I read his books before they were popular. Especially El coronel no tiene quien le escriba—books like that were fundamental in my relationship to many things. Not so much the visual part of it. But that’s cooked in—all this stuff is all cooked in [to my work].

Have you been back to Cuba?

Only when I was 15, on a brief visit to see my grandfather. But I would like to go. In fact, yesterday, there was somebody here who has been trying to get me to do a project in Havana.

I’m considering doing it. I’m excited about it. It will be an interesting thing to come back to Cuba in that way.

On Saturday, April 1, a conversation between the artist and Klaus Ottmann, deputy director of the Phillips Collection, will take place at 5:30 p.m. RSVP to Jack Shainman Gallery.