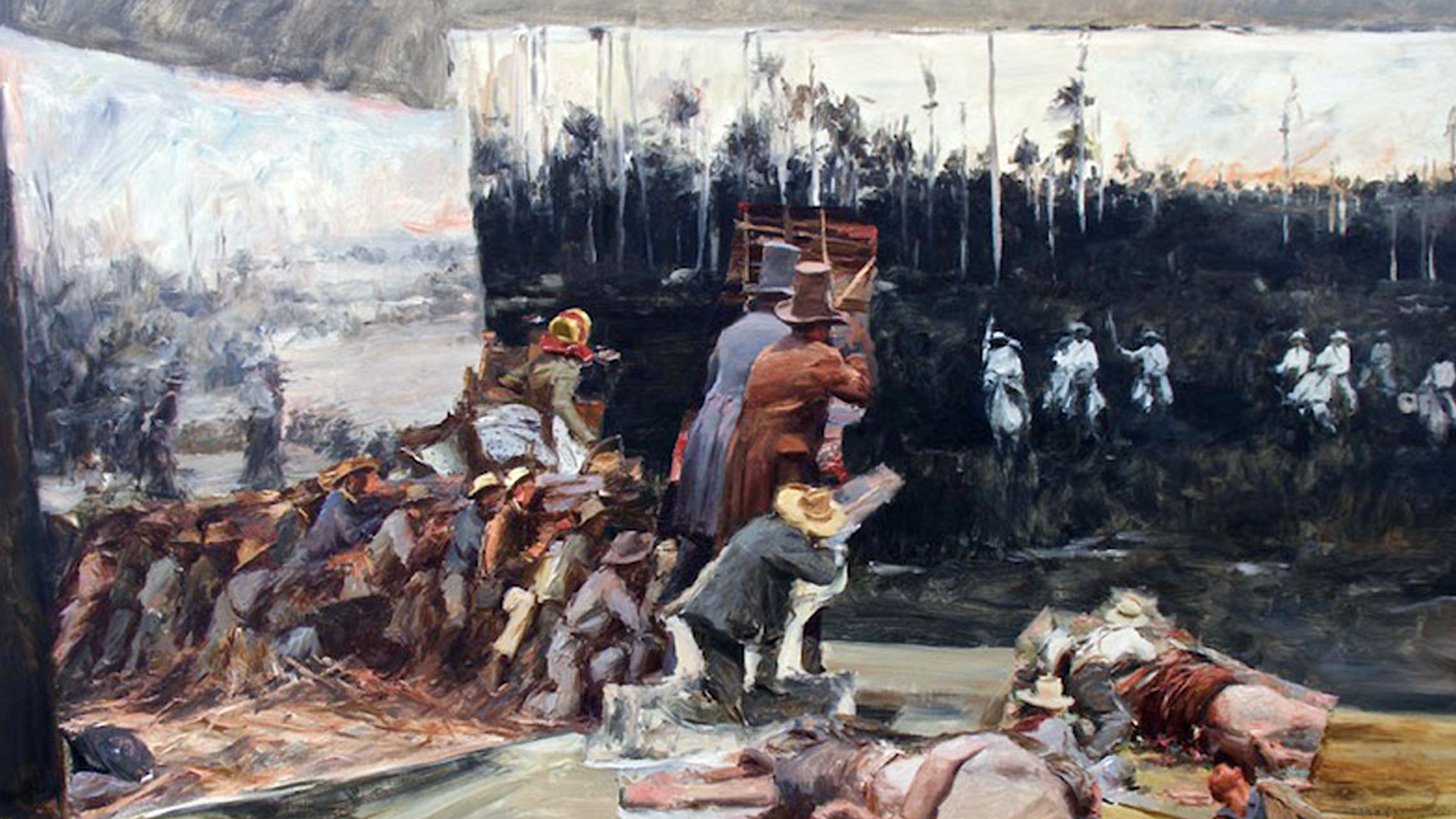 Arrechea in São Paulo. In Refazer, his solo show at Nara Rosler Gallery, Alexandre Arrechea continues exploring many of the visual and conceptual themes that have guided his recent work: parallel stripes, three-dimensional zigzags, stackings and superimpositions, and the multiple layers and meanings that evoke collective memory. Now in its final week, the show closes this Saturday, March 18.

Dulzaides x 2 in Havana. At the Museo Nacional de Bellas Artes, the exhibition Recordar es vivir marks the centenary of acclaimed jazz musician, arranger, and composer Felipe Dulzaides, father of contemporary artist Felipe Dulzaides. Presented in the library and central patio of the museum’s Cuban Art Building, the exhibition features a selection of album covers, photos, newspaper clippings, and personal mementos, turned into installations and performances by his artist son. A conversation about Dulzaides and his musical career will take place at 4 p.m. this Friday, March 17, at the museum.

Garaicoa in Houston. Last week saw the opening of Carlos Garaicoa: Selected Works at Guerrero-Projects, the gallery opened last fall by Mexico City–based dealer Enrique Guerrero. Among the works on view are light boxes and cut-paper mats that extend Garaicoa’s exploration of urban architecture and the fabric of the city, as well as six diptychs from his Cerámicas series, which recover and then revise old pharmacy mosaics that survive in some Spanish neighborhoods. On view through April 15.

Martínez Celaya in New York. Enrique Martínez Celaya returns to Jack Shainman Gallery in Chelsea with The Gypsy Camp, a show of recent paintings exploring memory, loss, and the nature of painting. “My paintings are not windows to a world but all that there is,” the artist has stated. The exhibition opens with a reception, 6–8 p.m., this Thursday, March 16 at the Shainman space on West 20th Street. The show runs through April 22.

And A Cuban State of Mind. The First Presbyterian Church in the City of New York has launched a two-month exhibition and related programs Cuban art and culture. The exhibition, Origin and Circumstances, features the work of artists Ariel Cabrera Montejo, Jairo Alfonso, Giorgio Viera, Geandy Pavón, and Armando Guiller. Curated by Meyken Barreto, the show explores the experience of emigration and its implications for creative expression. On view at the First Presbyterian Church in lower Manhattan through April 30.

Cuban photography at AIPAD. The Photography Show, presented in New York by the Association of International Photography Dealers (AIPAD), usually has a strong international component, and this year’s edition is no exception. Among the special exhibitions is The Light in Cuban Eyes, a selection of photographs drawn from the collection of Madeleine P. Plonsker. Artists in the collection include Juan Carlos Alóm, Arien Chang, Adrián Fernández, Eduardo Garcíia, Eduardo Hernández, Alejandro González, Liudmila & Nelson, and Alejandro Pérez. On view at The Photography Show, March 30–April 2 (vernissage March 29).

A birthday show for Herrera. Her solo show opened Lisson Gallery’s first New York space last spring, and now—just in time for her 102nd birthday—a show of Carmen Herrera’s works on paper is coming to the gallery’s second, more intimate space in Chelsea, which opened earlier this month. Look for the show to open in late April or early May. Meanwhile, the New York Times interviewed Herrera about the table that is “in the heart of my loft.” Read her comments here.

Valella in Miami. Just opened last Friday, the solo show Angela Valella: Carta desde lo desconocidotakes its title, and some inspiration, from Letter from an Unknown Woman, the 1948 film directed by Max Ophuls, and the novella of the same title by Stephan Zweig. Using objects, images, and the literary work of an unpublished writer, Valella explores the experimental process, using strategies involving language, display, and archival conservation. Presented at the Centro Cultural Español (CCE) Miami, the show is part of the Center’s Creating in feminine program. It runs through May 2.

Tonight, Valella will talk about her work with Spanish critic and curator Nerea Ubieto at CCE Miami, 7 p.m.

South Florida: The Object and the Image. Concrete Space, a new art venue in Doral, opens Saturday, March 18 with The Object and the Image (This is not a chair either). Curated by Aluna Curatorial Collective (Adriana Herrera and Willy Castellanos), the international group show includes work by Francis Acea, Néstor Arenas, Álvaro José Brunet, Marta María Pérez Bravo, and Rainy Silvestre. The show will also spotlight the work of Hexágono: Equipo de Creación Colectiva, an artist group active in Havana from 1982 to 1985, which included Consuelo Castañeda, Tonel, and others. The opening reception runs from 4 to 11 p.m. on Saturday, March 18, and the show runs through May 20.

And Cien & 31, S.A. El Bunker, the alternative art space in Cutler Bay, is hosting this exhibition paying homage to the lasting friendship among 22 artists who met as students of the legendary Academia Nacional de Bellas Artes San Alejandro. The organizers promise that “Collector art pieces, anecdotes, memories will mix with the characteristic humor of this generation and its time.” The show opened this past Friday, and will run through April 10.

Hatuey in Havana. A poem written in Yiddish in 1931 has become the inspiration for an opera that premiered in Havana this month. Sung in Spanish and Yiddish, Hatuey: Memory of Fire tells the twining stories of the poet, Oscar Pinis (also known as Ascher Penn), and the subject of his epic poem: Hatuey, the Taíno chief who fought the Spanish invaders. Written by Frank London, a member of the Klezmatics, a traditional Jewish music group, the opera was performed by La Opera de la Calle. After premiering in Havana’s first Celebration of Cuban Jewish Culture, the opera was also performed at the Teatro Arenal, ending its run on Sunday. It now becomes part of the repertory of La Opera de la Calle.

10 Million in New York. Later this month, Repertorio Español is presenting Havana’s Argos Teatro company in 10 Million. The play by Carlos Celdrán “offers a raw version of the history of Cuba,” wrote El Nuevo Herald. “With 10 Million, we are attending a true act of confession, intimacy” wrote OnCubamagazine, “a devastating and frontal dialogue with the audience.” 10 Million runs two nights only, March 29 and 30, at Repertorio Español.

In the Bronx, kicking off HFFNY. The Bronx Museum of the Arts is once more partnering with the Havana Film Festival New York for a party and preview screening. On Friday, March 24, the Hostos Center for the Arts & Culture hosts the reception and screening of Playing Lecuona, a documentary by Pavel Giroud and JuanMa Villar that traces the influence of celebrated composer and pianist Ernesto Lecuona on contemporary musicians Chucho Valdés, Gonzalo Rubalcaba, and Michel Camilo. A performance by the band Contino y Los Habaneros follows the film. Tickets are free but reservations are required. More information here.

Diago on TV. While Juan Roberto Diago: The Pasts of This Afro-Cuban Present continues its run at Harvard University’s Cooper Gallery, the Boston public television station did a segment on the artist and the show for its program “Open Studio with Jared Bowen.” The five-minute clip opens the video. Watch it here.