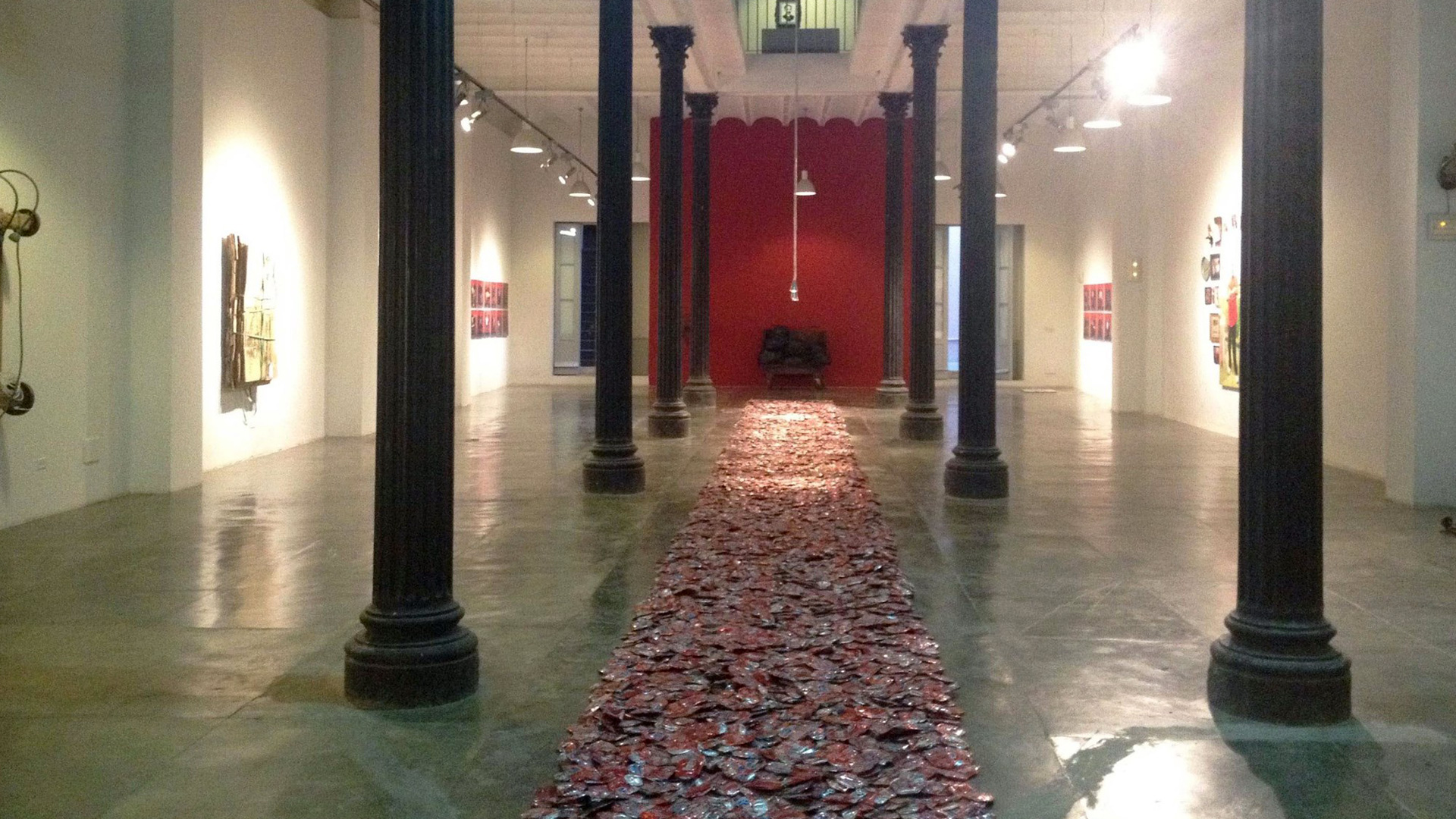 Ji, Ji, Ji in Havana. Last week saw the opening of Ji, Ji, Ji (Apóstrofe), a solo exhibition by Luis Gómez at the Museo Nacional de Bellas Artes. Featuring photography, installation art, video installation, and graffiti, the show reflects the playful and at times intentionally baffling approach that Gómez, a professor at ISA, sometimes takes toward the viewer. The show remains on view at the museum through April 10.

And Diógenes. José Ángel Toirac and Octavio Marín use light as a thematic thread for artworks that explore notions of truth and honesty in social, political, and religious contexts. Taking the ancient Greek philosopher Diogenes as its inspiration, Diógenes y la luz fills the three floors of Factoría Habana with installations and other pieces by both artists. On view through April 30.

Tomorrow: Penetraciónes. At Galería Artis 718 in Miramar, Frank Martínez: Penetraciónes presents a selection of recent works by the artist. Martínez appropriates well-known images and iconography, juxtaposing them to reveal the contradictions and absurdities of contemporary culture. The show opens tomorrow evening with a 7 p.m. reception.

Closing this weekend: Fashion Art Havana. Manuel Mendive, Eduardo Abela, and Cuty (Gustavo Echevarría) are among the artists who turned clothing into canvases for their art in this exhibition at the Galería Orígines in the Gran Teátro de la Habana Alicia Alonso. The Havana installation is the latest in a series of global “Fashion Art” exhibitions organized by Spanish designer Manuel Fernández. Even actor Jorge Perugorría has a piece in the show—a dress with a graphic, black-and-white design. On view through this Saturday, February 11.

Call for entries. Post-it 4 is coming this fall, and the call for entries has gone out. Artists on the island under the age of 35 may submit work for consideration from June 5 through June 30. Selections will be announced in August, and the show will open in September. More information here.

Yaque in London and Pisa. José Yaque spent part of this past autumn in London as an artist in residence with David Gill Gallery. Now, the works he created during that time are on view at the gallery, where José Yaque: Tierra madre (Mother Earth) opened last weekend. Yaque’s debut show in the UK, Tierra madre includes paintings, charcoal drawings, and sketches for installations. On view through March 5.

The day after Tierra madre opened in London, a second Yaque exhibition opened in Italy. At the Villa Pacchiani art center in Santa Croce sull’Arno, Pisa, José Yaque: Alluvione d’Arno/Arno River Flood reflects on questions of global sustainability and the life cycle of objects and materials. Part of the center’s “Know-how/Show-how” series, the exhibition is on view through April 2.

Upcoming: Garaicoa in Bilbao. At the Azkuna Zentroa arts and cultural center, Carlos Garaicoa: Urban epiphanies brings together three of the artist’s projects exploring the nature of the city and transforming its fragmentary expressions into visual and audible language. Last seen in Havana at the 2015 Biennale, Fin de Silencio (2010) turns fragments of the city’s sidewalks into lush tapestries, telling stories based on almost forgotten names of long-ago shops. Sin título/Alcantarillas (2014) focuses on street drains as the locus of citizens’ unrest and protest. Produced by Azkuna Zentroa for the exhibition, Partitura (2006–2016) converts the sounds of the city into a musical score composed by Esteban Puebla. The show opens on February 16 and runs through May 14.

Save the date: Hernández in Basel. Diango Hernández opens Her Holidays, his second solo show at Nicolas Krupp Contemporary Art, on Thursday, March 2. The opening reception starts at 6 p.m.

Luna in Oaxaca. Green Machine: The Art of Carlos Luna, the retrospective that opened in 2015 at the Frost Art Museum in Miami, is reaching the end of its run at the Museo de los Pintores Oaxaqueños (MUPO) in Oaxaca. To mark the occasion, the artist will launch the exhibition catalogue and give a personal tour of the show next Saturday, February 18, at 6 p.m.

More Sanchez in Miami. On the heels of Emilio Sanchez in South Florida Collections, which opens today at the Lowe Art Museum, the Miami-Dade Public Library System is presenting Emilio Sanchez: A Generous Life. The show is part of the Vasari Project, a library collection focusing on the art history of Miami-Dade County, and presents a selection of Sanchez works in the collection, including art, personal papers, and other objects.  The exhibition opens this Saturday, February 11, at the main library building, with a reception from 2 to 4 p.m. It remains on view through December 31.

Closing this weekend: Champions in West Palm Beach. A number of Cuban artists are participating in Champions: Caribbean Artists Breaking Boundaries in South Florida, now in its final days at the Armory Art Center in West Palm Beach. The show features work by Rafael Domenech, Jessica Martin, Damian Rojo, Leyden Rodríguez Casanova, and Clara Varas, among others. It closes this Saturday, February 11.

Saturday: Diago and Kcho in Miami. In addition to the solo show that just opened last week at Harvard, Juan Roberto Diago is one half of a double show at Pan American Art Projects and the PAAP Annex. Early works by both artists fill the gallery in Little Haiti, while the Annex hosts major installations. Kcho’s Objects of Desire, 2005, was one of his first “fishermen’s huts,” commissioned for his solo show at the New World Museum in Houston. Diago’s The Power of Presence, 2006, was shown at the Brooklyn Museum as part of its Infinite Island exhibition of Caribbean art, presented in 2007–2008. The show opens this Saturday, February 11, with a reception from 4 to 9 p.m., and runs through April 8.

Bedia in Birmingham. José Bedia joins a roster of “Global South” artists in Third Space/Shifting Conversations about Contemporary Art at the Birmingham Museum of Art in Birmingham, Alabama. The first large show of contemporary art from the museum’s own collection, it includes more than 100 works by such artists as Kerry James Marshall, Ebony Patterson, and William Christenberry.

Parlá in Savannah. The Savannah College of Art and Design (SCAD) welcomes alumnus José Parla with Roots, a show of recent artworks, including many shown during Miami Art Basel in December. Parlá’s grandfather, Agustin Parlá, was one of Cuba’s first aviators, who flew between Key West and Mariel on a bi-plane made of sugarcane and bamboo, which he named “Caña Brava.” A photograph of his grandfather is the inspiration for the exhibition, which opened this past Tuesday, February 7, and runs through July 16.

Alfonzo in New York. A late work by Carlos Alfonzo (1950–1991) is now on view in Fast Forward: Painting from the 1980s at the Whitney Museum of American Art. “Told, made shortly before the artist died, is layered with spiritual and occult motifs and violently inscribed with a network of curving lines, evoking a sense of inner struggle,” the exhibition commentary reads. “A scythe is juxtaposed with an infinity symbol as if to suggest that physical death is not necessarily the end.” The show, which opened late last month, runs through May 14.

Mendieta in New York. At The 8th Floor art space in Lower Manhattan, The Interesctional Self explores gender and feminist politics in an age of trans-identity. The international roster of artists includes Ana Mendieta, whose 1972 Untitled (Facial Hair Transplants) was an early exploration of these themes. The show opens today and runs through May 19; the opening reception is tomorrow evening at 6 p.m. (RSVP required).

Bruguera at Park Avenue Armory. Tania Bruguera will be part of a day-long program of panels, artist salons, and performances addressing themes of “genre, gender, race, and citizenship in the new political landscape” at New York’s Park Avenue Armory. The events are part of the symposium Culture in a Changing America, presented in partnership with the Aspen Institute Arts Program. The program will be presented on February 19; Bruguera will speak on the 1 p.m. panel.