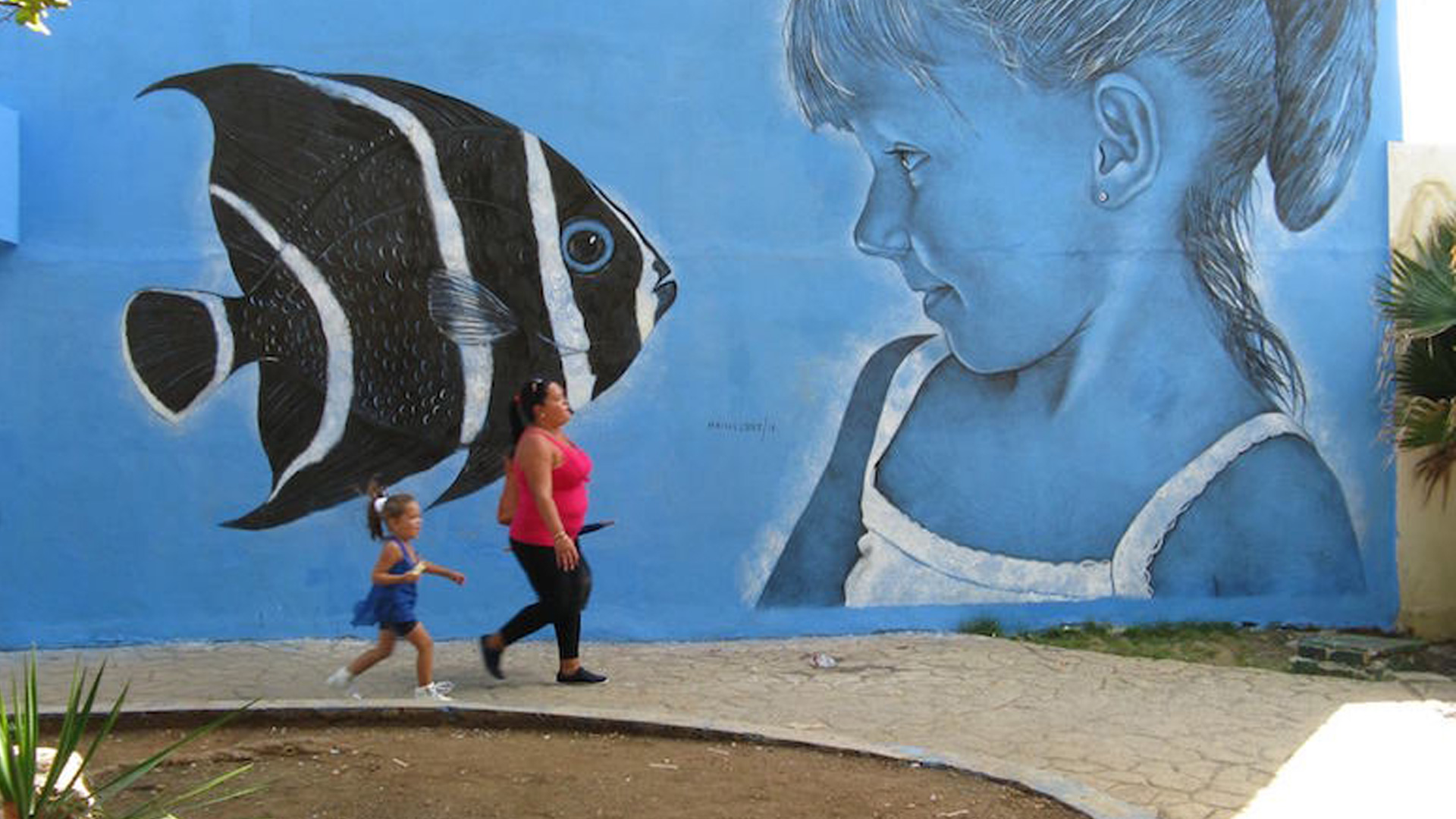 Far from the galleries of Vedado and Miramar, Máisel López fills the streets of his Havana  barrio with art—specifically, portraits of neighborhood children. Lianet Hernández talks with López about his Colosos portraits and their impact, his dedication to working in grisaille, the Mexican muralists, and US artist Chuck Close.

In Havana, as in any capital, there are big and small districts, elite neighborhoods and others of lesser status.

The Buena Vista neighborhood, for example, has a certain reputation. Located in Playa, east of Vedado, it has its share of con artists and swindlers, criminals and gang members. But it also has an art gallery, of sorts. Though its cultural infrastructure doesn’t rival Miramar or Vedado, a stroll around 44th and 25th, or 41st and 70th will reveal faces of children on a monumental scale, painted on neighborhood walls.

Máisel López has been in charge of transforming the urban spaces of Buena Vista into a permanent exhibition. Many people drop by his house, he says, wondering if he would take a photo of their kid and then paint it in the neighborhood. With these photos, he has a ready catalogue of would-be Colosos, as he calls them, waiting to occupy the next available wall.

López’s routine is simple. Walking the neighborhood, he looks for walls that could be used for his work, and goes about securing the necessary permits. What happens next is art: he draws a grid on the wall to transfer the photographic image, sketches it in pencil, and applies the paint.

“I thought to put the Colosos where I live because I believe it is necessary to bring art to the community, and to beautify our environment. I also found it very interesting to use the most damaged walls as the surfaces for art,” López tells Cuban Art News.

A few minutes into the conversation, and without being asked, Masiel identifies himself as a martiano, a follower of José Martí. He adds that he uses images of children because they are the hope of the world. The markedly realistic character of his works, as well as their oversized scale, reinforce that concept.

Máisel López’s work is popular throughout Havana, but he has said that his faces of children will not go beyond Buena Vista. The 20 murals he has created so far are all located in this district of the ​​Playa municipality, and contrary to what social stereotypes might dictate, residents there have come to appreciate them. The Colosos are an essential part of the neighborhood, and López is an artist whose raison d’être is the community.

One of his goals with the murals is to make people perceive the works as if they were in a real gallery—to interact with them and feel that art is capable of transforming the city itself and its values.

“I’m not interested in the protocol of a gallery opening,” he sais. “I really enjoy the art-making process, and people interacting with me as they go by. I’m not into the legitimizing processes of the art world. I like people to come across the work by chance, or just ask questions while I’m painting. That interaction, for me, is more important than anything else.”

From Canvas to Wall

Although the Colosos appeared in 2015, the idea behind them emerged a year earlier, with a series of human faces on canvas, titled Rostros (Faces). At that point, López realized that he could go much bigger.

Before training at the San Alejandro Academy, he had taken courses at the House of Culture in Playa. When he graduated, he continued to teach children and seniors at one of these community-baed institutions. But his fondness for wall art comes from a three-year mission in Venezuela, as a collaborator in the Corazón Adentro Culture Mission in Caracas and Portuguesa. There, he made his first murals. He realized that an image could be seen by many people without having to appear in a gallery, and that excited him.

“This work follows the paths of a quite realistic figuration, always in the portrait because I am interested in the face as an expression,” he says. “As far as art history goes, I’m an ordinary portraitist. I try to express feelings through my works, looking for codes and tools based on the styles I like. ”

Although Mexican muralism is an obligatory reference-point for any artist working with this technique, López does not claim it as his most direct influence. US painter Chuck Close has that honor, both in López’s mural painting and his works on canvas.

On canvas he has expanded beyond children, painting men and women of all ages, including the elderly, but always with the same approach. Figuration and black-and-white are for him the end-all of visual creation. He has declared himself a defender of the age-old technique of grisaille, rarely used by artists these days.

Do you think that at some point you will be interested in developing a parallel photographic practice, I ask.

“I really like photography,” he says. “My work would not make sense if I did not start with it. But I do not care for it as an art—only as a tool in my work, like paint or a brush.”

Curiously, in a world where artists create alternatives to sell more, I tell him, you seem to propose the opposite with each work.

“I’m happy developing this work in the community. It’s very different from exhibiting in a gallery, and my goal as an artist is to present work in dialogue with the public,” he says. “This implies, of course, being out of the gallery scene and the so-called market. I do not believe there is an art market in Cuba. Offering my work to the public makes me more fulfilled as an artist.”

I point out that, although they do not laugh all the time, people associate childhood with a period of happiness at all costs.

“The fact I represent a serious child, or a child looking up, doesn’t mean a sad child. It’s reflection about the future—interpreting each of them as faces of the future, and placing the analysis in another context,” he replies.

“If they look at the sky it doesn’t signify a religious allusion, as many people believe. There’s always a nod to the times to come, and a search for different expressions, and that’s what sets a work into motion. All kids aren’t equal. Each one of them has a range of expressions. Each is a universe in her- or himself.”