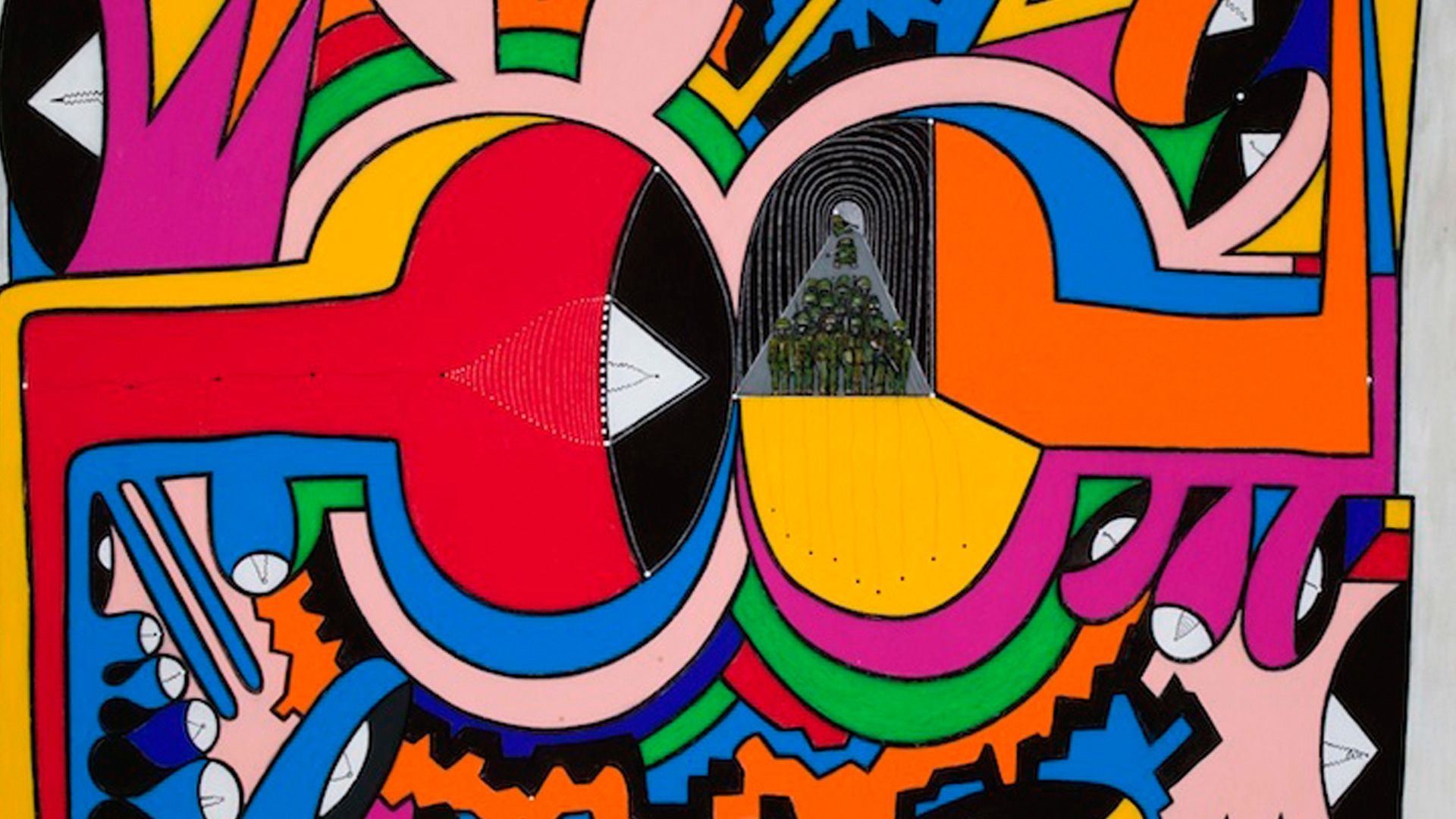 Alejandro Anreus is a professor of art history and Latin American/Latino Studies at William Paterson University in New Jersey, and the curator of Luis Cruz Azaceta: Dictators, Terrorism, War and Exile, the debut exhibition at the recently opened American Museum of the Cuban Diaspora in Miami. He spoke with Cuban Art News New York editor Susan Delson about Azaceta’s art, the Cuban diaspora, and a utopian idea for an ambitious exhibition.

Let’s start with a bit about your background.

I actually began as a visual artist. I practiced as a draftsman and printmaker, and am a two-time CINTAS fellow, way back when.

By the 1990s I had pretty much focused my vocation on curatorial and writing. I was a curator at the Montclair Art Museum [in Montclair, NJ] and then the Jersey City Museum, where I did a lot of work dealing with Latino artists and African American artists. In 1997 I received my PhD from the CUNY Graduate Center. I did my dissertation on José Clemente Orozco, which became my first book, Orozco in Gringoland: The Years in New York. Since then, I’ve been an academic and an occasional curator.

I have always had a foot in contemporary Latino art, but it’s been mostly dealing with Nuyorican and Dominican artists. Only in the last decade I’ve been dealing with Cuban American artists.

You wrote the first monographic book about Luis Cruz Azaceta, which was published in 2014. How did that come about?

I’ve been a member of the A Ver advisory board based at the Chicano Studies Research Center at UCLA. As part of that, I was convinced by Chon Noriega [Director of the UCLA Chicano Studies Center] that I should write a monograph on Luis.

What about the exhibition? How did you come to curate this show?

Originally, I was approached by the executive director of Aljira, in Newark, a contemporary art center that has been in New Jersey for 30 years. They had always wanted to do a Luis Cruz Azaceta show. But instead of a retrospective, they wanted a very focused show in terms of the main themes in his work. Since I was simultaneously working on the monograph, the exhibition evolved naturally out of that.

When the American Museum of the Cuban Diaspora was finally coming close to opening, the founding director approached me about taking that show, and adapting it slightly. Which I ended up doing.

When did you first see Luis’s art? What drew you to it as a subject for your own work?

I first encountered Luis’s art, believe it or not, when I was a high school student in the late 1970s, and an aspiring artist. I even wrote him a letter, and he wrote back. I still have the letter that he wrote me, with drawings of cockroaches on the envelope. He was very encouraging—he told me to continue pursuing what I wanted to pursue, et cetera.

Then I trained as an art historian. I do a social, very contextual type of art history, and I always put a great deal of emphasis on objectivity. I felt that his experience and my experience had too much in common—you know, working class, New Jersey, growing up in the Northeast. I didn’t think that that was going to help me in framing his work.

Of course, ultimately it did help me.

What do you think Luis’s art has to say to various audiences—US North Americans, Cubans, Cuban Americans, the world at large?

To me Luis is one of the few artists who fit into the larger framework that I’ve been interested in as a curator—the critical humanist tradition that can be traced back to Goya, to the German expressionists, to Orozco, to Leon Golub.

What’s key to me about his work is that he is one of a handful of Cuban American artists who broke into the mainstream early on. Part of that has to do with the pictorial force of his work—the formal inventiveness that can speak to anyone who’s interested in art that’s challenging and provocative, just from the point of view of how you construct an image. That’s the first thing—he communicates to anybody.

The other thing is that, no matter how much he’s experimenting with a variety of formal languages, the content of his art is always on the side of the underdog. He always speaks for that element in our world that does not have a voice. There’s an identification and a compassionate solidarity with the marginal elements in our world.

Those two things allow his art to speak to, and beyond, Americans, Cuban Americans, Cubans, et cetera. I’ve had conversations with a number of young Cuban artists from the island, and they say that he’s one of the few artists among the exiles that speak to them—both for the formal inventiveness, and this real commitment to a humanist critical content.

When I saw Luis in New York this fall, he mentioned that he might be going back to Cuba for a visit—his first in over 50 years.

He has mentioned that to me also.

What do you think about that?

I think that if he feels that that’s important for him to do, he should do it. I have what I would consider a rather quirky position in all of this. On the one hand, I am not willing to go at this point, but I feel very strongly that anyone who wants to go should go, and anybody who wants to come should come. I’m a firm believer in a real—and I underline real—total exchange between both communities.

What always concerns me is when I hear anybody with any kind of official title saying that real Cuban art takes place only on the island, or real Cuban art only takes place outside of the island. I think Cuban art takes place wherever the hell it wants to take place, as long as there are individuals who have something to say. I’ve seen a wide variety of things on both sides that I think are very interesting, that are full of formal innovation and that have real content.

What I would like to see, in a kind of  utopia, is a real conversation created between the very best artists here [in the US] and the very best artists there [on the island]. That can happen in a really rigorous exhibition that can be organized to travel back and forth. That would be ideal.

Do you know of anything like that that’s being planned?

Not currently. It would be very gutsy and visionary of an institution in the US to take that on. We now have one or the other. There’s something of an avalanche regarding art from the island. With the art of the diaspora, there are attempts here and there, but there still isn’t something substantial.

That’s why I think the American Museum of the Cuban Diaspora is important. It is not a political museum, with any kind of ideological limitation. It’s a museum about documenting the work of all the Cuban artists who live outside of Cuba.

Did you know about the Dialogues in Cuban Art initiative that Elizabeth Cerejido organized?

I would have gladly been engaged in something like that, but I only found out about it when it took place. To a certain extent, I’m sort of an odd man out because I live and work in the Northeast. I’m not part of what I would call the cultural community of Miami. My beachheads of contact there are through the Cuban Heritage Collection, the Cernuda gallery, where I’ve been invited to lecture since 2009, and now this exhibition at the American Museum of the Cuban Diaspora.

RELATED: On “Dialogues in Cuban Art: An Exchange Program Between Havana and Miami”

What are some of your upcoming projects?

As you know, I’ve been working on a  book that hopefully will be finished next year, called Havana in the Forties, dealing with the MoMA show and all the international presentation of Cuban art in that decade. I’ve been working on this for almost a decade. It’s finally come together, and it’s interesting that I’m going to complete it at a time when all these things are taking place—the normalization of relations between the US and Cuba. Both outside and now in Cuba, the 1940s are regarded as a really key period in the culture at large—the music and the literature and the visual arts. That’s a project that I’m very excited about.

I’m also working on another monograph, on a Cuban American painter in Miami, Arturo Rodríguez. He’s slightly younger than Azaceta but has also had a long trajectory as a figurative narrative painter. Like Azaceta, he’s been very popular with collectors and audiences outside Miami. His work has a charged figuration, with a very poetic, intense narrative.

Luis Cruz Azaceta: Dictators, Terrorism, War and Exile runs through March 26 at the American Museum of the Cuban Diaspora in Miami.