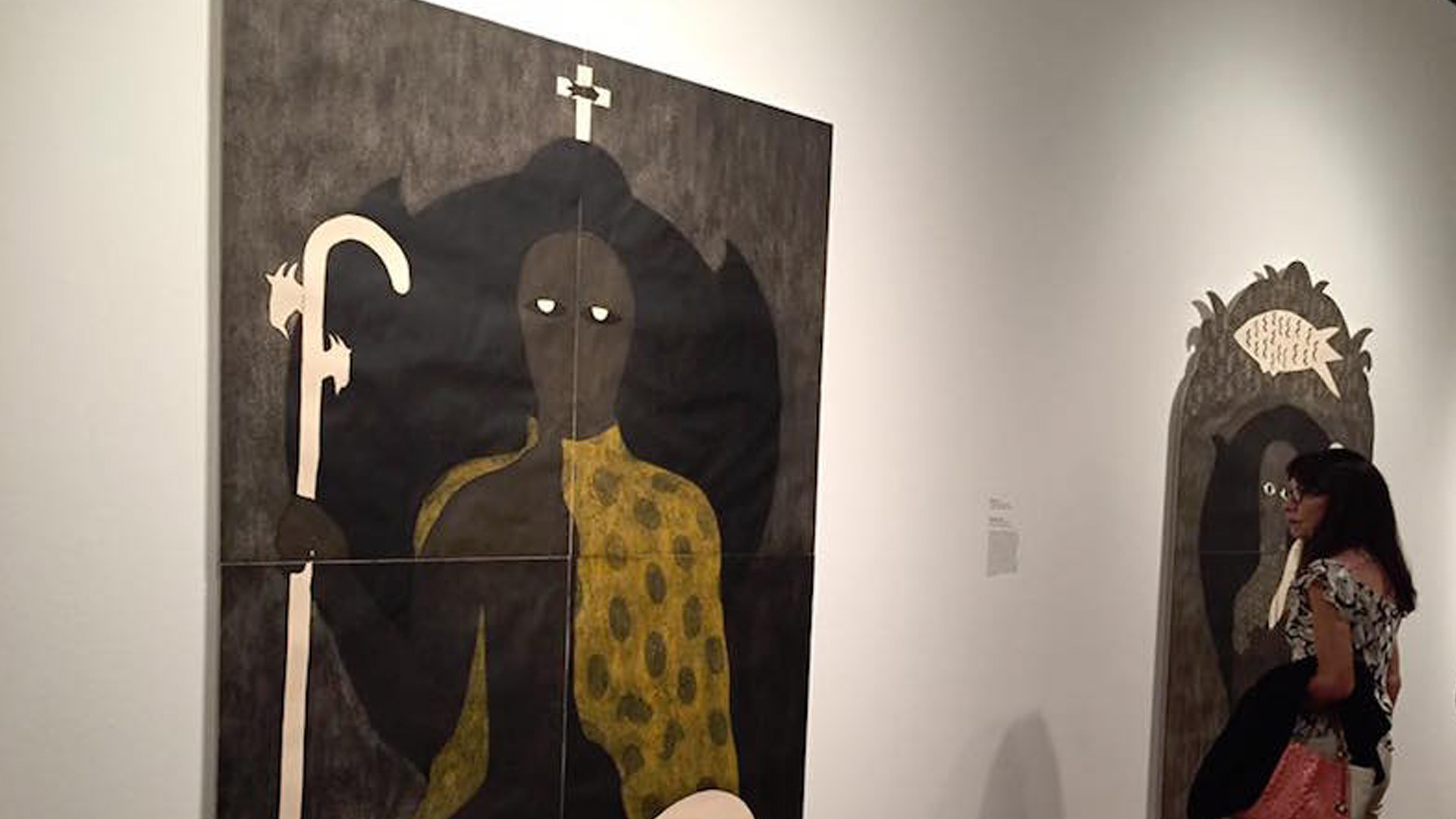 For the first time, this artist is having a major solo exhibition in a US museum. Nkame: A Retrospective of Cuban Printmaker Belkis Ayón is also her first solo museum show outside the Island. With its signs of religious inspiration, its figures shrouded in mystery, textures of animal skin, and more still to be discovered, the symbolism of her art is now presented to the American public.

The young draftswoman and printmaker still speaks through her works, 17 years after her death. How to understand her figures without lips, interrogating the viewer? The role of a woman in a black-and-white world dominated by men?

Through February 12, the Fowler Museum in Los Angeles is showing 43 major works by Ayón. The exhibition’s curator, Cristina Vives, spoke with Cuban Art News about the reasons for bringing Ayón´s work to the United States, especially with the restoration of diplomatic relations between the two countries.

Why did the Fowler Museum decide to host the exhibition at this time? How were works chosen for this exhibition? Were you able to bring all the works you wanted, and are you satisfied with the results?

Although it is a retrospective, the Nkame exhibition currently at the Fowler Museum at UCLA is a somewhat smaller version of a show that I curated with Estate of Belkis Ayon in September 2009, presented in the Convent of St. Francis of Asisi, Havana.

On that occasion I chose 83 works made between 1984 and 1998, with an emphasis on the work since 1991. For the version of Nkame at the Fowler, I kept the same curatorial concept, and all of the large-formats works have been included. Except for a few early years of her training, the show at the Fowler presents the core of Belkis Ayón´s art.

This is her first solo exhibition in a museum in the United States, and her first solo exhibition in a museum outside Cuba, both before and after her death. This might seem a paradox, given the importance and diffusion of her work in the early 1990s, but it´s worth mentioning that Belkis died in 1999 at 32, and that is a very early age for museums anywhere to decide to “legitimize” the work of an artist.

Actually, museums are very cautious in their considerations. Seventeen years passed since her death before Belkis could step into the international pantheon. My personal interes with this exhibition is to make it a celebration of her life, a true Nkame (which means salutation in the Abakuá language), and a reassessment of her work today. And I think that has been achieved.

How did the show come to the Fowler Museum?

It may not be a surprise that it ended up in California, and Los Angeles especially. The first wave of important collectors for Belkis came from MoCA Los Angeles. In May 1997, they visited the alternative exhibition that she organized in her grandmother’s house during the Havana Biennial that year. Many of her works went home with them to Los Angeles.

Belkis´s prints had emerged from the Cuban national context to engage in a direct dialogue with the international art world, one one on, wall by wall. Also, that year MoCA LA invited her to participate in the Kwangju Biennial in South Korea, and the following year, her work entered MoCA’s collection—and MoMA’s in New York. It was in Los Angeles that she had her final solo exhibition, in October 1998 at Couturier Gallery.

With the support of Carole and Alex Rosenberg, New York was also a reference point for Belkis’s work in the US. But defnintely, Los Angeles is the city where her art is still alive. Thanks to Darrel Couturier and the vision of the Fowler’s director, Marla Bern, this retrospective, like a boomerang, came back to Los Angeles.

To what extent do you see commonalities between Ayón´s work and US artists? Do you think that a dialogue between the work of Cuban and American artists can be achieved?

Certainly many people would find similarities between Belkis’s work and that of American artists, or artists worldwide, particularly in terms of themes and formal concerns. I see similarities, for example, to Kara Walker’s handling of issues relating to the period of slavery in North America, as a platform for contemporary discourses on gender, identity, violence, and censorship. Also, there is some similarity between Belkis’s figures and Walker’s silhouettes—the preference for black-and-white images—among other possible associations.

But I have always thought that the important thing in art is to focus on the efficiency—or not—of the visual languages used by artists to express themselves, at all times, beyond any possible influences, differences, or manipulations. Everything is invented, and luckily art is a sedimentation of successive layers of knowledge.

I understand Belkis much more in the context of Cuban art of the 1990s, when many of her contemporaries took refuge in an apparent detachment from the dramatic reality we lived in at the time, and were camouflaged in a deliberate return to official language, as a way of enabling their critical judgments to transcend and bypass censorship. I also think of Belkis as “covert” in her apparent religious or anthropological interests, which almost everyone insists on seeing as a primary concern in her work.

I insist that Belkis should be analyzed as the postmodern methodological artist that she was, and that she spoke of in her interviews and statements. I know that from working around her for nearly ten years, and having shared not only her creativity but above all her doubts, fears, and the daring she took in her career and her life.

Belkis was trained in the academy, and her ability to reflect her era of the 1990s told us about the daily life of the post-Soviet crisis that Cuban society was going through, and the universal crisis of values at that time. She did this through a narrative, an imaginary Abakuá [a male-only, secret Afro-Cuban society] that she created for this purpose. Actually, if you ask an Abakuá about his feelings toward Belkis’s art, you would find respect for her art but doubts about her credibility. And that’s what art is about. In other words, we would be lost if we tried to understand “what Abakuá is” through Belkis Ayon´s work. To me, that confirms her significance as an artist.

To present this multiple and unprejudiced approach to her art was the intention for the Nkame exhibition in Fowler. It was not a simple mission, since we are talking about a respected museum that is a study center and art exhibition space working from the perspective of cultural anthropology. But I think our approach to Belkis’s work—from aesthetics, ethics, and the theory and history of art—helped to deepen the initial vision that motivated the museum to host this exhibition.

You’ve curated several exhibitions of Cuban artists in the United States since the restoration of Cuba-US relations was first announced. How is Cuban art being received in America today?

Today we talk of openness, standardization, increase, and expectations in the relations between the US and Cuba, and in many areas. But in the visual arts, I can assure you only that we are expanding the scenario.

We lack information or are prone to forgetfulness. For instance, a brief review of the bios for 1990s Generation artists will demonstrate in both number and quality, the intense presence of Cuban art in the United States long before the recent change in circumstances. Exhibition catalogues and reviews in arts publications and other media are also proof of this.

In fact, during recent decades a large number of US museums and commercial galleries, curators, cultural journalists, and others in the international artistic community visited Cuba or hosted exhibitions of Cuban art. Much of this is due to the individual initiative of artists and their managers, gallery owners, and American institutions, and especially the interest of the private and institutional collectors in the United States. I do not think that this flow has been surpassed yet, or that the easing in relations has yet caused substantial changes.

Of course, an opening up of travel opportunities in both directions would help these numbers. But I insist that at all times, the best of Cuban art has been known in the United States, and serious US  collectors were never unaware of its existence. What should worry us is that, in measuring the expanding possibilities for contact in both direction, the margin of error in our choices will expand proportionately.