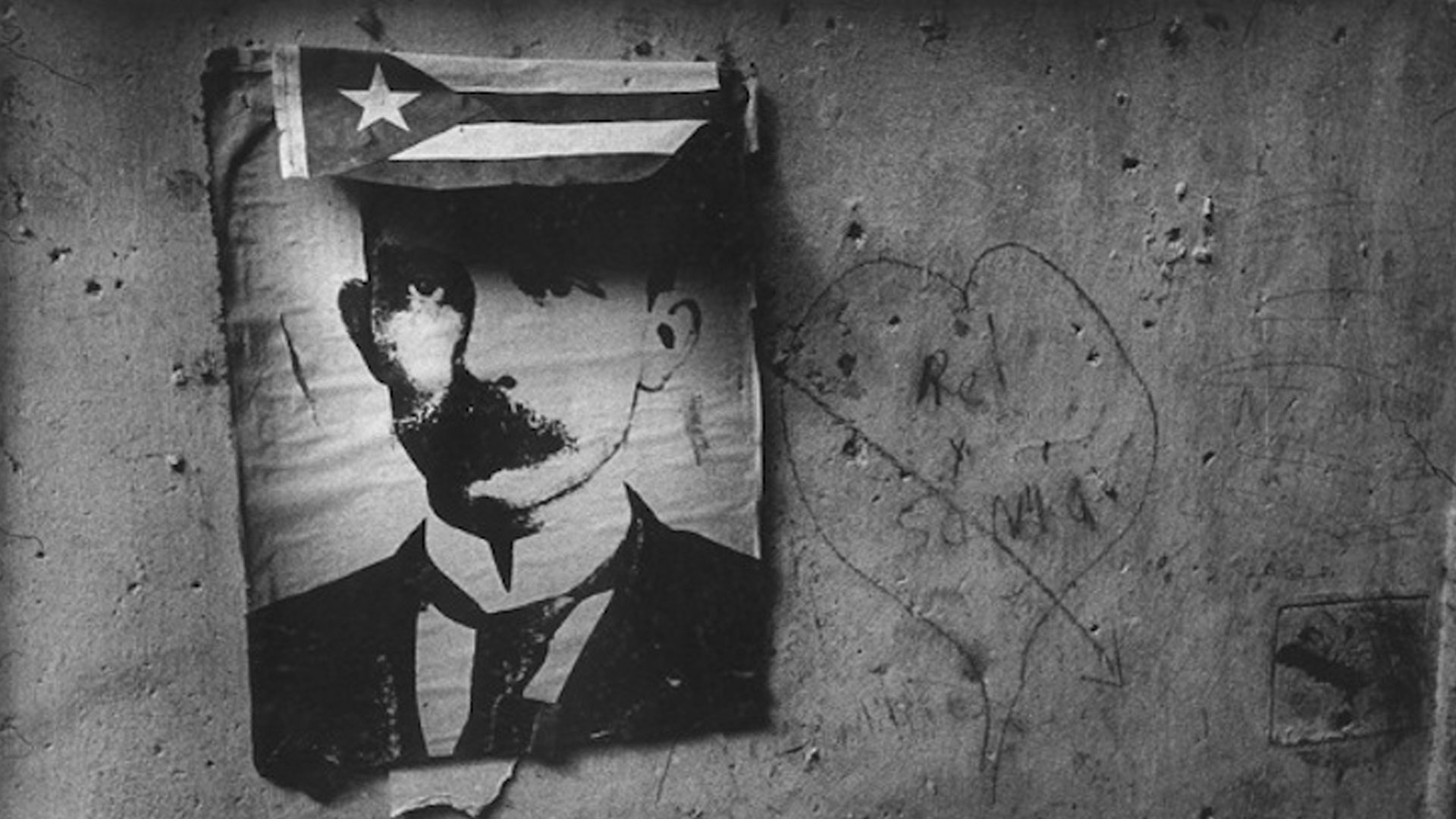 With that in mind, this month Cuban Art News will publish a series of articles on Cuban photography—its historical practitioners, emerging artists, and the photographic image as cultural record.

This first text, by curator Abelardo Mena—Havana editor of Cuban Art News—focuses on photographer Ramón Martínez (Grandal) and the 1982 book La Ciudad de las Columnas, in which Grandal’s black-and-white images were set in dialogue with the classic essay by Cuban novelist Alejo Carpentier.

Havana of 1982 was a party. A joyful calm had replaced the tense days of Mariel migration. New habits of cultural consumption were emerging. In Saturdays at the Cathedral plaza, the value of independent craftsmanship was being rediscovered. The annual November walk around the Temple was revived. The Market Center opened in the former headquarters of the Sears stores), and Opina magazine—a publication of the Instituto de la Demanda Interna (Institute of Internal Demand)—not only celebrates a “Most Popular” prize but publishes otherwise unseen classified ads for swaps and selling.

In the visual arts, the Revolution’s baby boomers produce a new art, without asking permission. Their icon will be the Volume One exhibition, a “start-up” of generational cultural display that, by the end of the decade, would decisively change the face of the island. Artists like Gustavo Pérez Monzón, Tomas Sánchez, Leandro Soto, Elso Padilla, Flavio Garciandía, along with social-expansion projects like Arte en la Fábrica, Telarte (which dressed all of Cuba) and Hexágono, and a number of cultural institutions—the Wifredo Lam Center (1983), the Instituto Superior de Artes (ISA), and the Havana Biennial (1984)–intensely nourished the renewal of the cultural paradigm.

Then, from Paris, came a singular recognition. The Convention of the World Cultural and Natural Heritage (UNESCO) unanimously declared La Habana Vieja, and its system of colonial fortifications, as a Cultural Heritage. It was an accolade but also a challenge for managers, researchers, archaeologists, restorers, architects, historians, and officials who, from the Palacio de los Capitanes Generales, the vaults of the Casillo de la Fuerza, or the busy Plaza de la Catedral, worked (and dreamed) about a restored Old Havana, reinserted into contemporary times.

They recognized the undeniable losses to the historic center, which, since the Republic era, had been abandoned by official urban policies. They managed to keep alive a cultural trend that, nourished by different initiatives, proposed a rehabilitation and enhancement beyond the notion of “monument” articulated in the 1964 Venice Charter for the Conservation and Restoration of Monuments and Sites.

What they were attempting to reverse was not only the evident deterioration of the city, but also the loss of local identity on the part of its inhabitants. Their proposal was also intended to encourage the revival of those “pre-industrial” technologies and trades that are essential for maintaining an urban fabric as varied as La Habana Vieja.

If, in December 1967, Resolution no. 450 converted the Palacio de los Capitanes Generales into the first bastion for recovering the district and its histories, in 1981 the Cuban government provided the means to do more: an exclusive budget for the rehabilitation and restoration of the neighborhood’s Centro Histórico. The first Five-Year Restoration Plan was born under the leadership of the Office of the Historian of Havana, which was affirmed as the coordinating entity of the rehabilitation process.

The 1982 UNESCO declaration (and the accompanying funds) were an undeniable victory for the “preservation” impulse. But that would be followed by a relentless struggle against a historical-sociological hegemonic mainstream, which understood the past as mere archaeology, ready to be dynamited by a tout avant-garde revolution with no debt to the past.

The basis of this Darwinist discourse was the worship of a modernity that, whether pro-American or pro-Soviet, conceptually followed the 1956 Urban Planning Project for Havana, designed by the Catalan urbanist José Luis Sert. It also followed the official take on urban construction that, in the 1970s, envisioned a Havana with broad boulevards (like Kalinin Avenue in Moscow), shaded by skyscrapers of Yugoslavian design, produced in cheap prefabricated molds. It was a discourse that replaces the cultural essence of Architecture and Urban Planning with the simple logic of the bulldozer and wrecking ball.

The final crossing of the Rubicon in the Centro Histórico’s restoration took place 11 years later, one night in the Special Period. On October 30, 1993, Fidel Castro—on behalf of the State Council of the Republic of Cuba—and Eusebio Leal signed the Decree-Law no. 143.

Fidel sealed the occasion with a biblical turn of phrase: “Don’t return the money to me, multiply it.” The document not only extended the authority of the Historian’s Office and its legal status but declared the Centro Histórico a Zona Priorizada para la Conservación (Prioritized Conservation Area). And supported with its own funds this company and its social aims.

Paradoxically springing from a traditional framework, the most innovative, comprehensive, enduring, and resonant post-Revolutionary Cuban urbanism project finally started. The Office of the Historian became the incubator of a project capable of generating a conceptual revolution—at the international level—in management strategies for urban districts.

The emergence of the Habaguanex company in 2004, spun off by this decree, provided the necessary economic support to make the project sustainable, in a combination of profitability, business autonomy, and social aims that had not yet been evaluated by economic standards nor the repertory of best practices for governance.

Within this mosaic of trends, protagonists, and events, the Havana edition of La Ciudad de las Columnasemerged.

When editor Radamés Giró was commissioned to publish the La Ciudad de las Columnas essay, writer and novelist Alejo Carpentier (Havana 1904–1980) had been dead for two years. And 18 years separated Giró from the essay’s first publication in 1964, when it was included in the volume Tientos y Diferencias, published in Mexico after the novel El Siglo de las Luces (The Age of Enlightment).

With its intellectual affinity for 20th-century mass media, the photographic image had inspired this essay by Carpentier. La Ciudad de las Columnas was written in 1963 as an introductory text to the exhibition 110 fotos de la Arquitectura cubana: Ambiente Cubano (110 Photos of Cuban Architecture: The Cuban Environment), presented by the Italian-Venezuelan photographer Paolo Gasparini (Gorizia, Italy, 1934) at Galería Habana.

Encouraged, as always, by two formidable muses, Architecture and Music, Carpentier’s short text defied its function as a mere introduction. Today it remains the most accurate, decostructive discourse on the architecture of Havana, the “functionalism” of our popular roots, and the Cuban character of our particular Baroque.

Gasparini had joined the army of traveling international photographers who came to record the face of a country in revolution. He had been in Venezuela, along with Carpentier, to document the renovated Caracas of architect Carlos Raúl Villanueva. In 1961, he moved to Havana, where he remained until 1965 as a photographer for Revolution magazine and for the National Council of Culture (CNC).

In 1970—while in Cuba, the people were determining the success of the “Ten Million Sugar Cane Harvest”—Gasparini`s images and Carpentier’s text were joined in a 120-page book, published by Editorial Lumen, Barcelona. That same year, another Cuban writer—poet and novelist José Lezama Lima—concluded his prologue for “Temporada en el Ingenio” (Season of Ingenuity), a lengthy photo essay by the Cuban photographer “Chinolope” (Guillermo López Junque) at the behest of Che Guevara.

For the 1982 edition of La Ciudad de las Columnas, Giró and designer Roberto Medina—who had previously designed other books by Carpentier—chose a hard cover with flaps, similar to the design used for the Carpentier novel Baroque Concerto. Forty images by Cuban photographer Ramón Martínez, known as Grandal (Havana, 1950), were selected to counterpoint the text.

At 32, Grandal was already gaining recognition in the Island’s photographic circles, thanks to his photo essay “La imagen constante” (The Constant Image). Comprising 45 photos taken throughout Cuba between 1973 and 1977, the series recorded the images of José Martí that flooded walls, political advertisements, shop windows, workplaces, and public places. In the 1960s, noted painter Raúl Martínez had catapulted the image of the hero from popular graffiti to the art studio. “La imagen constante” took the Martí myth back to its roots.

Shown in part in 1974 in the III National Youth Fine Arts Hall, and in the pages of magazines such asRevolución y Cultura, in 1982 “The Constant image” was shown for the first time in its entirety, in a solo exhibition held at the José Martí National Library. It was selected, along with other essays such as “Cubanos de Acero” by Ivan Cañas and “Mi Barrio” by Tito Alvarez, for the Cuban Photography Prize convened that year by the Ministry of Culture. It was also included in the group exhibition of contemporary Latin American photography held at the Pompidou Museum in Paris.

For Grandal, Carpentier and his work were not unknown—in 1960 and 1970s Havana, visual artists and writers mingled in a lively creative scene. Commissioned by Revolución y Cultura—the most important and dynamic cultural magazine of that time, whose staff included such important photographers as Mayra A. Martínez and Gilda Pérez—Grandal documented numerous events related to literature and publishing.

Grandal’s photographic vision stood apart from the usual run of graphic journalism. If the periodicals demanded obvious images of “real” events—almost always focused on propaganda—he went after visual metaphors. In his compositions he became a creator of exquisite atmospheres, and a decisive supporter of the rich tonality of black-and-white supplied by his Leica and the mysteries of the dark room.

Grandal’s photos do not capture “the decisive moment” announced by Cartier Bresson, but the ambiguity of reality.

For the edition of La Ciudad de las Columnas published by Letras Cubanas, Grandal brought a different visuality to Carpentier’s text. Gasparini had registered the exterior planes of the city, searching for “local color” that included people as they pursued their everyday lives. But Grandal’s images are more faithful to the deconstructive function of Carpentier’s text. His photographs exclude the usual plazas and casual strollers. Human figures are rare, no more than brief shadows that come and go.

He manages to document, rationally and without distraction—much as the Germans Bernd and Hilla Becher do in their photographs of factories—a repertoire of functional architectural elements. It is Cuban style lo-tech as sketched out by Carpentier. Stained glass, railings, curbstones, screens, gates, balconies, balustrades, and columns contain and color the light, separate exterior from interior, and define privacy while, thanks to the work of dedicated artisans, attaining a level of persistence reserved for Cuban icons.

But for Grandal, ennumerating these elements is not a repetitive exercise. He was a tenacious master of the dark room in times of scarcity for silver and gelatin. From the expressive economy of black-and-white, he gives the photos an almost baroque, dramatic nuance that sets him apart from tourist postcards showing the Habana Vieja of Kim Kardashian’s selfies or National Geographic’s rhetoric of exoticism.

The version of La Ciudad de las Columnas that was published in Havana in 1982 is already a rarity and a treasure, and not only because it is impossible to find an unscathed copy in the “all for sale” book stalls  at the Plaza de Armas, overrun with foreign tourists. It is due to a clever editorial concept: giving permission to a young photographer to reinterpret a text by the Island’s most important novelist.